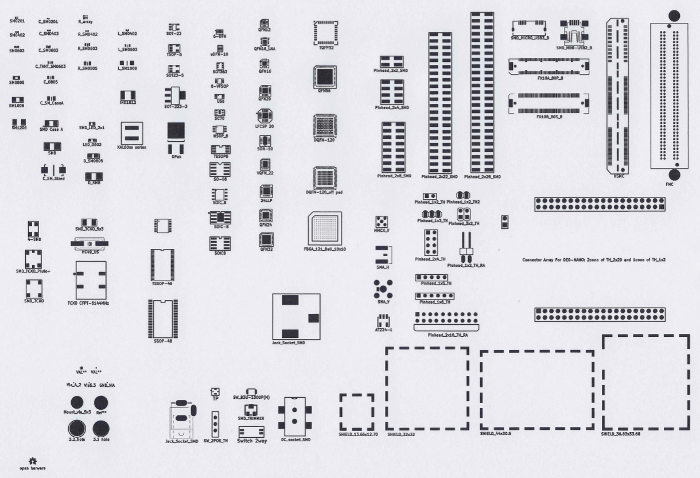 Footprints from the Myriad-RF component library for KiCAD

KiCad is a suite of electronic design automation (EDA) tools for schematic capture and PCB layout, that are completely open source and without any artificial limits on things such as PCB size and number of layers.

The KiCad tools were used in the design of the Myriad-RF 1 module and interface boards, and as open source hardware the schematic and board layout “sources” have been provided under a liberal licence, along with the Gerber files that are used in manufacturing.

Proprietary EDA tools would have almost certainly made it easier and quicker to design these boards, and while such tools can be notoriously expensive, most companies involved in PCB manufacture have them out of necessity. However, in the case of Myriad-RF 1 and the interface boards a decision was made to use KiCad in order to further lower the barrier to participation.

It’s clear that CERN would need to develop a great deal of advanced electronics in support of their groundbreaking experiments, but it may come as a surprise to learn that open source hardware and KiCad play key roles. Indeed, CERN have their own Open Hardware Repository (ohwr.org), hosting designs for everything from backplanes and processor boards, to particle accelerator monitoring systems. In addition to which, they are also making a significant investment in KiCad.

Code contributions to KiCad include a push & shove router and a graphics abstracttion layer, and for more details see the project page on ohwr.org. Why are CERN making this investment? This statement from the project wiki succinctly articulates the opportunity:

“We think that KiCad can do to PCB design what the gcc compiler did to software: ensure there are no artificial barriers to sharing so that design and development knowledge can flow more freely.”

Anyone who has ever used EDA tools, open source or proprietary, will appreciate how much time can be lost in creating new components and footprints. And when creating RF designs the risk of failure due to layout errors resulting from incorrect and low quality parts/libraries is even higher.

This problem is something that we would also like to address through Myriad-RF, and by way of a first step, Lime Microsystems have published their KiCad library. This includes, for example, connectors for HSMC, FMC, DE0-Nano, FX10B and Micro-USB 3.0.

Contributions to the GitHub repository of libraries for other RF and ecosystems parts (digital and FPGA etc), both for KiCad and other EDA tools, are welcomed.

For an introduction to KiCad see the presentation from Werner Almesberger (PDF), and also the excellent Contextual Electronics video series from Chris Gammell.