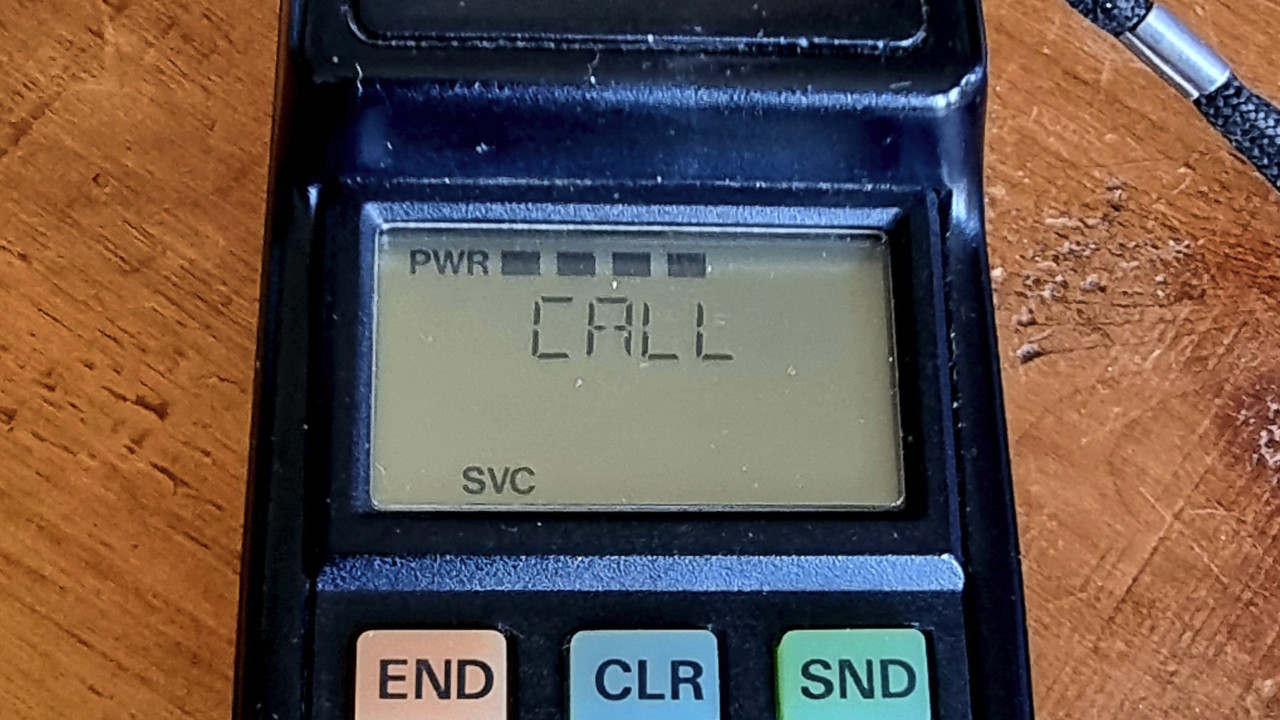 It’s been a bumper month for the LibreCellular project with not one but two major milestones to celebrate: The first end-to-end test of the continuous integration (CI) system and the first basic service network offering connectivity to real-world 4G Long Term Evolution (LTE) devices.

“We are pleased to report that the next milestone has been achieved,” Andrew Back announced, “and it is now possible to set up a network to provide basic service, supported by: A reference hardware platform; a packaged fork of srsRAN; and documentation covering spectrum licensing, software installation, network configuration and subscriber provisioning.”

The srsRAN fork, Andrew explains, is necessary to boost performance over using the SoapySDR application programming interface (API). “It shouldn’t be the case that there is such a performance overhead to using SoapySDR,” he says, “and this likely points to an issue in the interfacing between the library and Lime Suite” – and if that issue can be discovered and resolved, and other issues can be addressed, the project may be able to switch back to the mainline version of srsRAN instead.

The project’s CI system has also passed its testing, showing the ability to automatically build and deploy the software stack to a base station and complete an end-to-end test. “Now that we have confirmed basic operation,” Andrew says, “we will switch to using Ansible and Docker, as used by the Osmocom project and making use of the associated configuration that they provide.”

Launched in May last year, LibreCellular is a ongoing project to provide a fully-tested and validated hardware platform and software stack for 4G Long Term Evolution (LTE) networking building atop existing open-source projects. Those interested in learning more can read the user guide for instructions on deploying their own LTE network.

Production testing of the LimeSDR Mini 2.0 software-defined radio (SDR) board is now underway, though delays in the receipt of certain component – an issue the electronics industry has still not been able to address – mean a schedule slip to mass production and delivery.

“We are pleased to report that production test has been set up and we have all of the components with the exception of the FPGAs,” Andrew Back explains in the latest crowdfunding campaign update, “which were dispatched last week and should be with the assembly house later this week.

“However, the delay in receiving parts does mean that delivery of orders placed during the campaign has slipped to January 6. We apologise for the delay, and will of course ship sooner than January 6 if at all possible.”

The LimeSDR Mini 2.0 aims to improve on the original LimeSDR Mini design, offering the same radio capabilities with a more powerful field-programmable gate array (FPGA) backed up by an open-source toolchain – making it easier to write and run custom gateware on the device, alongside the glue logic provided from the factory.

Anyone looking to keep up-to-date with the project, or place a pre-order ahead of mass production and shipping, can find out more on the Crowd Supply campaign page.

Self-described “chilled-out human” Chris Farrow has put a LimeSDR board to work bringing back a vintage mobile phone from the dead, albeit briefly – after picking a unit up, initially simply to use as a non-functional costume prop.

“I’d recently purchased the Cleartone [CTN9000 ETACS] phone from eBay purely as a prop for a 1980s-themed birthday party,” Chris explains, “but after the party I started thinking about getting it to actually do something. The design of the (E)TACS system was similar to most other analogue mobile networks at the time: signalling between handset/network was achieved by tones/FSK [Frequency-Shift Keying] and fwd/reverse voice channels used basic FM [Frequency Modulation].

“After hooking up a 7.5V PSU directly to the phone’s battery terminals it sprang to life and revealed its PSTN [Public Switched Telephone Network] number as ‘0836 257712.’ From the data on the Osmocom Analog pages it looks like this was a Vodafone UK TACS phone and so we now know the initial paging ID to feed into the software. I downloaded and compiled the software and we’re off. Luckily it comes with a ‘–limesdr’ option that sets things up for the SDR I was using.”

Using the Osmocom Analog application, which was specifically written to drive vintage mobile phone hardware, Chris was able to successfully connect the phone to a LimeSDR USB – though, sadly, the device’s electronics succumbed to age soon after. “It shows ‘ERROR NAM’ every time it’s powered on,” he explains, “and there’s a really odd smell (‘hot electronics’ mixed with fishy smoke! Yeuuck.)”

Chris’ full write-up is available on his blog.

The Internet Archive has called upon radio hams and historians the world over to help it build a collection of materials as part of the Digital Library of Amateur Radio and Communications (DLARC) project.

“Internet Archive has begun gathering content for the Digital Library of Amateur Radio and Communications (DLARC), which will be a massive online library of materials and collections related to amateur radio and early digital communications,” Kay “K6KJN” Savetz, program manager for special collections, explains. “The DLARC is funded by a significant grant from the Amateur Radio Digital Communications (ARDC), a private foundation, to create a digital library that documents, preserves, and provides open access to the history of this community.

“The library will be a free online resource that combines archived digitized print materials, born-digital content, websites, oral histories, personal collections, and other related records and publications. The goals of the DLARC are to document the history of amateur radio and to provide freely available educational resources for researchers, students, and the general public.”

To support that, the Internet Archive has called upon contributors with “troves of ham radio, amateur radio, and early digital communications related books, magazines, documents, catalogues, manuals, videos, software, personal archives, and other historical records collections, no matter how big or small,” to get in touch. “All collections in this digital library will be universally accessible to any user,” Kay explains, “and there will be a customised access and discovery portal with special features for research and educational uses.”

More information on the project and how to contribute is available on the Internet Archive blog.

“The goal of ns-O-RAN is to kickstart research on control of 5G RAN systems using xApps [custom RAN control applications] and the Open RAN interfaces,” says Tommaso Melodia, professor at Northeastern and director of its Institute for the Wireless Internet of Things. “This includes research and development of methods and techniques based on big data, machine learning, and artificial intelligence (AI).”

The ns-O-RAN platform was first developed as part of a project to investigate traffic steering in 5G networks using these xApps. “As of today the research community lacks a sandbox to build data-driven xApps, and create large-scale datasets for effective AI training,” lead author Andrea Lacava and colleagues explain in their paper’s abstract.

“We address this by introducing ns-O-RAN, a software framework that integrates a real-world, production-grade near-RT RIC with a 3GPP-based simulated environment on ns-3, enabling the development of xApps and automated large-scale data collection and testing of Deep Reinforcement Learning-driven control policies for the optimization at the user-level.

“In addition, we propose the first user-specific O-RAN Traffic Steering (TS) intelligent handover framework. It uses Random Ensemble Mixture, combined with a state-of-the-art Convolutional Neural Network architecture, to optimally assign a serving base station to each user in the network.”

The paper introducing ns-O-RAN is available on Cornell’s arXiv preprint server under open-access terms, while ns-O-RAN itself – which builds on and extends the OpenRAN Gym framework – is available on GitHub under the reciprocal GNU General Public License 2.

The Telecom Infra Project (TIP) has announced the formation of a new sub-group focusing on opening fixed-access networks, boasting founding members from Vodafone, Telefonica, TIM, and others.

“In Vodafone, we see that openness and disaggregation are key principles that allow us to build the flexible and agile network we need to support our evolving customer needs,” claims Vodafone’s Bruno Cornaglia, fixed access senior manager, of his company’s involvement in the group. “Our work in this area complements similar work elsewhere in the network, for example with OOPT [Open Optical & Packet Transport, another TIP group] and Open RAN, and we’re excited that this project will help realize these same benefits in the fixed access network.”

The TIP’s Open Fixed Access Networks sub-group will, the organisation has confirmed, work to address challenges in building and scaling access networks – including, but not limited to, improving interoperability and diversity in the access network, modernising operations and deployment architectures, and boosting capacity in last-mile networks by pushing for the transition from gigabit-capable passive optical networking (GPON) to 10-gigabit symmetric passive optical networking (XGS-PON).

TIP has confirmed that the operators involved in the group will work together to develop technical requirements for a “pizza box” optical line terminal (OLT) device for deployment in local exchange environments, with a request for information expected to be issued later this year.

Maker and self-described “engineering enthusiast” Mihai Cucuic has eschewed the use of community networks in favour of deploying his own local LoRaWAN network for a city-wide air quality sensor network.

“This may not be a very good idea,” Mihai admits. “For most purposes you’re much better off using something like The Things Network, as you’re helping the community and vastly increasing your coverage by leveraging on said community.

“However, based on your coverage needs and future deployment plans this could actually make sense, as you gain guaranteed quality of service and you won’t run into costs as you scale. In this case I just wanted to see how feasible it is to run an isolated pocket of LoRaWAN.”

The network, deployed in Magurele, Romania to support a network of low-power air quality sensors, is based on a single gateway deployed on the roof of a tall building to provide as clear a line of sight as possible across the city. The gateway communicates to a server over ChirpStack, gathering data from the LoRaWAN sensors and transmitting it via MQTT for recording in InfluxDB and visualisation via Grafana.

Those interested in seeing how the network was built, or in building their own, can find more information on the project’s Hackaday.io page.

“Normally, when it comes to radio-related projects, my home of New York City is a terrible place to be,” Stephen explains. “If we could see and hear radio waves, it would make an EDM rave feel like a sensory deprivation tank. Radio interference plagues the metropolis. But for once, I realised I could use this kaleidoscope of electromagnetism to my advantage – with a passive radar station.

“Unlike conventional radar, passive radar doesn’t send out pulses of its own and watch for reflections. Instead, it uses ambient signals. A reference antenna picks up a signal from, say, a cell tower, while a surveillance antenna is tuned to the same frequency. The reference and surveillance signals are compared. If a reflection from an object is detected, then the time it took to arrive at the surveillance antenna gives a range. Frequency shifts indicate the object’s speed via the Doppler effect.”

Using two antennas connected to low-cost software-defined radios and using transmitters atop the Empire State Building as the pulse source, Stephen was able to successfully turn a Raspberry Pi single-board computer into a functional passive radar – picking up the airspeed of a passing plane during testing. “My passive radar setup doesn’t have much everyday value,” he admits, “but as a demonstration of how far and fast inexpensive SDR technology is advancing, it’s a clear signal.”

Stephen’s full article is available on the IEEE Spectrum website, and was published in print in the November 2022 issue of the magazine.