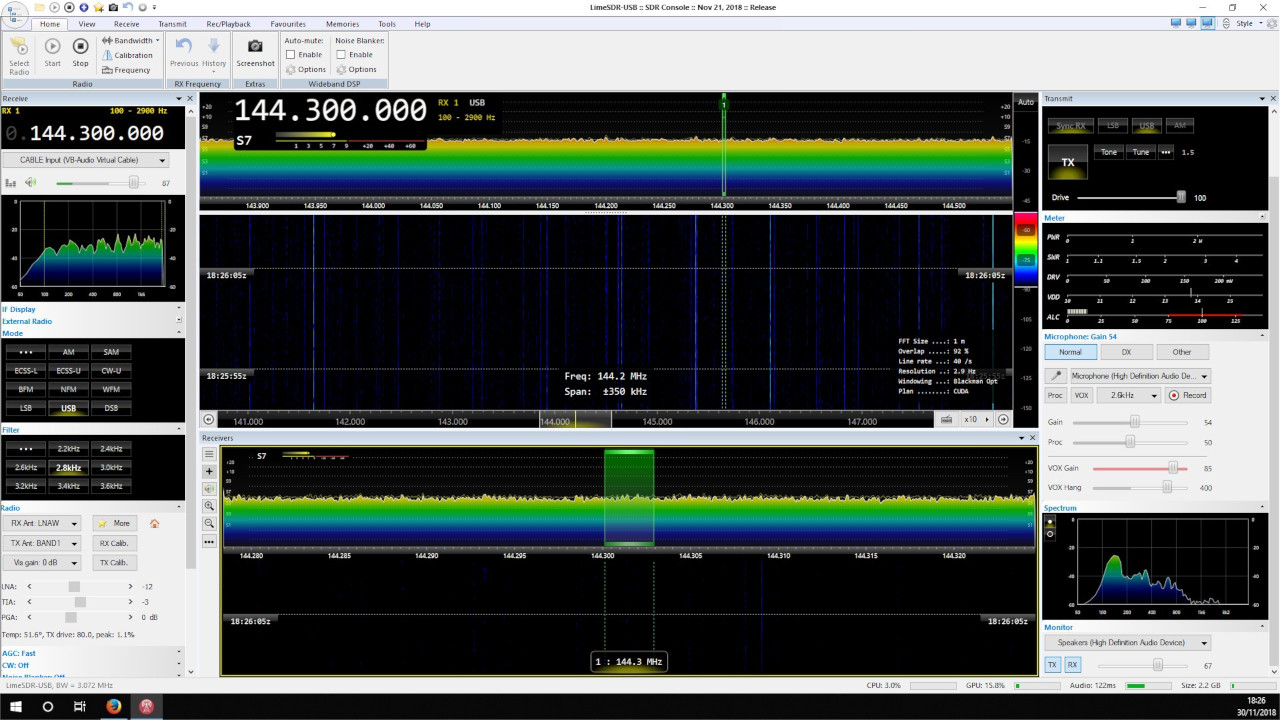 Popular software package SDR-Console is set to get transmit support on the LimeSDR range, from version 3.0.4 onwards – once beta testing is complete.

The beta release is not yet publicly available, however, with Jason pointing interested parties to the SDR-Radio.com Test Team group for application to download the software ahead of its general launch.

The MarconISSta project, which has placed a LimeSDR on the International Space Station to map and test global radio frequencies, continues its experiments – and has spotted an interesting signal which appears to originate from the ISS itself.

In the project’s latest update, written by Martin Buscher, details of a signal spotted by the LimeSDR are provided: “A signal that varies over time between 2403 MHz and 2405 MHz,” Martin explains, providing graphs to illustrate its behaviour. “This signal clearly originates from the ISS, but we do not know what it is, most probable a frequency shift of a TCXO (oscillator).

“We will analyse the discontinuities and oscillations of the signal and how these match the ISS orbits and eclipse times. We also asked regulatory authorities and ARISS if they have any idea what the signal is, with a final answer still pending.”

Suggestions from the comment section range from heating and cooling of hardware as the ISS orbits the earth, the behaviour of equipment connected to certain battery compartments, and a noisily-oscillating power supply.

As always, all the mission updates are available from the MarconISSta website.

Elsewhere in space, Fox-1Cliff successfully launched aboard a Falcon 9 earlier this week and has been designated AMSAT-OSCAR 95 by the AMSAT organisation.

Named for long-time AMSAT supporter Cliff Buttschardt, Fox-1Cliff was part of the SSO-A SmallSat Express mission launched via SpaceX Falcon 9 from Vandenberg Air Force Base this Monday. After activation, Brazilian stations were the first to report reception of its safe-mode voice beacon while AMSAT Fox-1 member Burns Fisher was the first to submit telemetry showing it to be in good health. Commissioning is expected to be completed some time next week, after which the satellite will be opened for general use.

More details on the Fox-1Cliff mission can be found on the AMSAT website.

NASA’s satellites, meanwhile, go a little further than most, with the MarCO A and B CubeSats have travelled to Mars in order to provide communication connectivity with the InSight lander.

“Two CubeSats, MarCO A and MarCO B, have gone where no CubeSats have gone before: beyond low Earth orbit. MarCO A and B—short for Mars Cube One—traveled to the Red Planet in a mission to prove that the tiny satellites can be useful in deep space,” explains Michael Koziol in a piece for IEEE Spectrum.

“The MarCO satellites used a technique called bent-pipe relay to send data back to Earth in near real time. Rather than clean and encode the data, bent-pipe relays just amplify the signal after converting it from an uplink to a downlink frequency. With bent-pipe, JPL knew what had happened to the lander with a delay of only 8 minutes and 7 seconds—the amount of time it took for the signal to physically travel from Mars to Earth. The hope is that future missions can use CubeSats with bent-pipe relays to easily provide real-time communications for the critical moments during entry, descent, and landing, instead of shuffling other orbiters into position for just a few minutes of work.”

Michael’s full piece can be read on IEEE Spectrum now.

Hackaday has drawn our attention to a project to deal with varying radiation patterns from a fixed-wing drone’s antenna – by 3D-printing an active roll stabiliser.

“This is an FPV [First-Person View, where drones are raced using a head-mounted display linked to an on-board camera] antenna stabiliser to solve a problem of having very bad radiation pattern when turning with plane,” explains Anders Homm in the documentation for his project. “Plane turns take a lot longer and they fly further away than multicopters so this was very noticeable and disturbing.

“This is only [a] 1-axis gimbal so it only helps on a roll axis,” Anders continues. “I designed this with my Mini Talon in mind so it should be good for peaceful cruising. The design is also very slim to fit my specific need but I think this way it could be also easily embedded into a frame if needed.”

The design uses a 3D-printed frame to hold a servo motor and the antenna. Using signals from the iNav flight controller hardware, the servo motor is used to keep the antenna pointing straight up regardless of how the aircraft rolls.

Instructions, and a demonstration video, are available on Thingiverse.

Shortwave enthusiast Mark Hirst has published a ‘skill’ for Amazon’s Alexa voice assistant platform which allows for hands-free querying of signal databases to find out who is broadcasting on a given frequency.

Detailed on the SWLing Post, Mark’s Alexa Skill allows the user to ask questions about broadcasts on particular frequencies at particular times and receive useful answers – using only voice queries. The skill is free, and activated using the Alexa App under the name “Shortwave Signals.”

A guest post from developer Mark details how to get the best results from the tool – which can answer queries like “Alexa, ask Shortwave Signals who broadcasts on one five five eight zero kilohertz in English from 3PM to 8PM” – while also adding a usage tip: “‘Right now’ is interpreted as the current time in your time zone,” he explains, “which is fine if your time zone is UTC/GMT, but doesn’t work if you are elsewhere in the world.”

RTL-SDR has alerted us to a series of posts on the design and testing of a PCB antenna family based on a spiral design for wideband use – and, in a neat design twist, which include suction cups for window mounting.

Created by Hex and Flex as part of the Vivaldi project, discussed in an earlier OTA, the designs are discussed in a series of blog posts covering the reason for the new, eye-catching spiral design, the modelling and simulation process, and the testing process.

As before, Hex and Flex has produced a number of the antennas and has made them available for sale, along with the ‘palm frond’ Vivaldi antenna design, on Tindie in 300 MHz+ and 800 MHz+ variants.

Finally, Element 14 has published a new entry in its Tech Spotlight series highlighting how to go about designing circuit boards for use with surface-mount chip antennas.

“Surface-mounted chip antennas have helped incorporate wireless solutions in applications having challenges in board space and power resource limitations,” the article begins. “In this article, we learn about the best practices for designing a chip antenna on the PCB of an RF radio.”

Building on a previous guide to placing antennas for optimal performance, the piece walks the reader through the placement of a chip antenna, board-level design guidelines, impedance matching, power supply bypassing and decoupling, and even dealing with corner compensation in circuit track bends.

The full piece is available to read, following free registration, on Element 14 now.