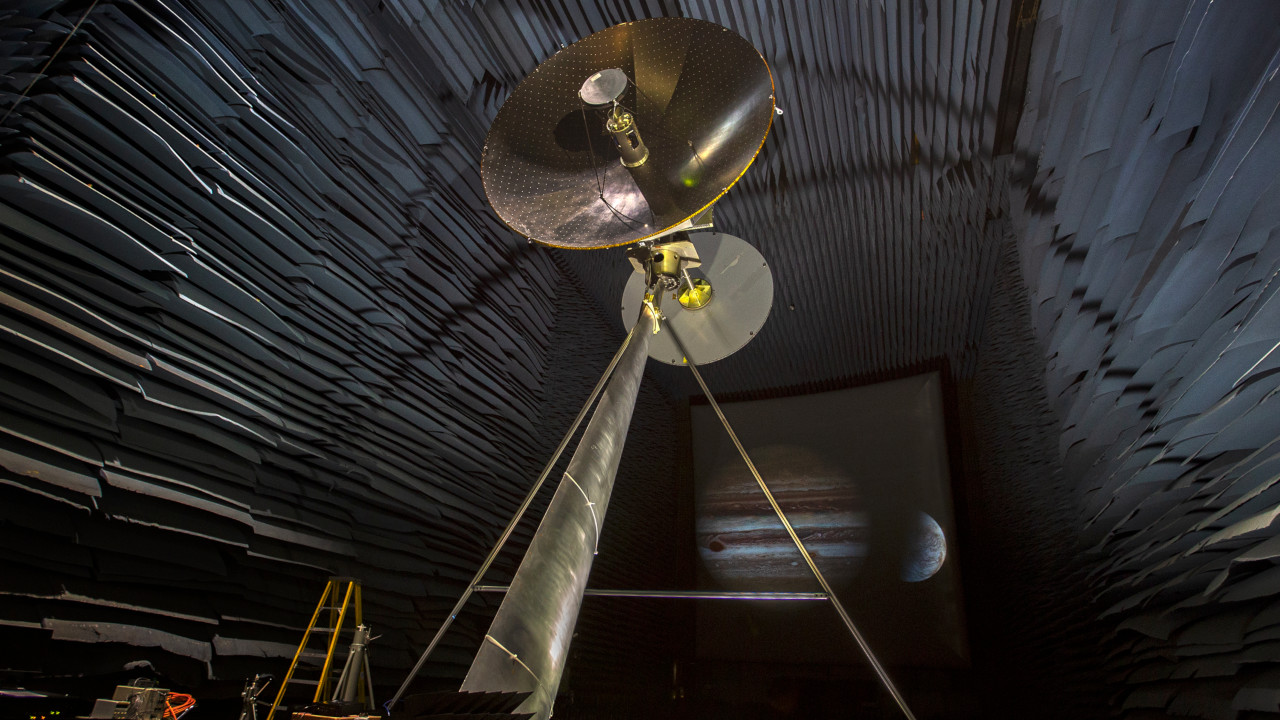 The second AMSAT-F Recontre Radiomateur Spatiale was a special one, for an out-of-this-world reason: its lectures were transmitted to a global audience using a LimeSDR Mini and the Es’hail-2 (QO-100) satellite.

Evariste Courjaud explained the transmission chain in an interview published this week on the Lime Micro community hub: “The chain was: a PC running Vmix (video mixer) to NDI [Network Device Interface] (over Ethernet) to a PC modulator. On the PC modulator: NDI to ffmpeg H.264 encoder to lime_dvb to a LimeSDR Mini to DVB-S2. Then the power amplifier: DVB-S2 to a preamplifier to a 150W 2.4 GHz PA to a 1.4 metre dish.”

Daniel Estévez, meanwhile, reported receiving and decoding the transmitted lectures via Twitter. “I use the following hardware,” he expounds during the same interview. “A 1.2m offset dish from diesl.com; an Avenger PLL-321S-2 LNB which has been modified to feed an external 27 MHz reference; a 10 MHz GPSDO by DF9NP; a 27MHz PLL by DF9NP to generate the 27 MHz reference for the LNB from the GPSDO 10MHz; a Chinese set-top-box to feed DC (and sometimes the 22 kHz tone) to the LNB; a splitter and DC block to feed the IF of the LNB to the LimeSDR; A LimeSDR, using the 10 MHz GPSDO as reference. Regarding the software, I used: GNU Radio, together with gr-osmosdr and SoapySDR to get samples from the LimeSDR; leandvb to receive DVB-S2; VLC to play the video.”

The full interview is available on Lime Micro now.

SDR-Radio 3.0.7, which includes beacon locking compatible with the QO-100 satellite’s amateur transponders, was released this week – and some hams have already been demonstrating considerable success.

The SDR-Radio 3.0.7 release, which includes the same SDR Console as used by Christian in his experimentation, is available to download now from the official website.

Peter ‘nepe’ Kis has updated his scalar network analyser (SNA), detailed in an earlier OTA, bringing a range of improvements and fixes.

First announced last month and detailed in an interview on the Lime Micro community hub, Peter’s limeSNA software is based on the pyLMS7002Soapy example and has been tested with the LimeSDR Mini. “I pushed a new version to the GitHub,” he writes of the latest version. “[I] added sample rate selection, more visible sweep cursor, SWR display mode, sweep time improvements, modular sweeper, and bug fixes.

“With 20 MS/s 500 kHz resolution (steps=40) a 100 MHz sweep only takes about 6 sec. I also tried a multi tone measurement method (MultiToneSweeper.py), with the same settings the sweep time is halved but its highly reduced dynamic range so no UI options added for this right now.”

The latest version of limeSNA is available from Peter’s GitHub repository under the Apache 2.0 licence.

Registration and a call for participation (CFP) have opened for GNU Radio Conference 2019 (GRCon 19), to take place this September at the Space & Rocket Centre in Huntsville, Alabama.

The ninth annual GRCon event, GRCon 19 is calling for both developers and end users from the GNU Radio community to submit proposals – to include, but not be limited to, “projects, presentations, papers, posters, and problems,” its organisers alliterate – ahead of the first round closing on the 1st of July 2019.

Those interested in participating can find details on the conference submission page; those just wishing to attend can find registration information on the GRCon 19 website.

The MagPi Magazine, official publication of the Raspberry Pi Foundation, has published an article by David Honess on receiving slow-scan TV (SSTV) signals from the International Space Station (ISS) ahead of the broadcasts beginning today.

“What is Slow Scan TV (SSTV), then,” David asks his audience. “You convert a picture into sound (similar to fax machine or dial-up modem noise) transmit the sound via radio, and convert the received sound back into a picture at the other end. The International Space Station (ISS) has a long history of transmitting SSTV pictures for global events, each lasting several days, where people the world over tune their radios to the ISS and try to receive the pictures every time it flies over their home.”

Designed to bring the concept of SSTV and software defined radio in general to a less-technical audience, David’s article is based around the use of a Raspberry Pi 2 single-board computer and a low-cost RTL-SDR compatible USB dongle as the receiving SDR. Many of the techniques discussed are also applicable to other SDR devices, including the LimeSDR USB and LimeSDR Mini.

David’s full feature is available now on the MagPi website.

The US Defence Advanced Research Projects Agency (DARPA)’s Radio Frequency Risk Reduction Deployment Demonstration (R3D2) satellite, which is to test a new membrane reflectarray antenna design, has been successfully launched into orbit on board a Rocket Lab launch.

Detailed in an earlier OTA, DARPA’s R3D2 mission is designed to test out a new antenna design constructed from tissue-thin Kapton membrane and designed to be packed into a compact micro-satellite then expand to 2.25 metres in diameter once in low Earth orbit. The mission itself will see the antenna tested for ease of deployment, survivability, and its core radio frequency characteristics.

DARPA’s use of private launch services provided by Rocket Lab is part of what DARPA Tactical Technology Office director Fred Kennedy described as the prioritising of “rapid acquisition of small satellite and launch capabilities,” allowing it to run the design and development through to a successful launch in just 18 months. Details of the satellite’s testing phase, however, have not yet been made public.

NASA, meanwhile, is currently testing a high-gain antenna design which is to form the heart of the communications system on board Europa Clipper for its reconnaissance mission to Jupiter’s moon.

A full-scale prototype measuring ten feet tall, the Europa Clipper high-gain antenna design is undergoing Earth-bound testing at the Experimental Test Range (ETR) of the Langley Research Centre in Virginia. “Several years ago we scoured the country to find a facility that was capable of making the difficult measurements that would be required on the HGA and found that the ETR clearly was it,” explains Thomas Magner, assistant project manager for Europa Clipper at the Applied Physics Laboratory, in an interview for NASA.gov.

“The measurements that will be performed in the ETR will demonstrate that the Europa Clipper mission can get a large volume of scientific data back to Earth and ultimately determine the habitability of Europa.”

More details on the test can be found on the NASA website.

The Radio Society of Great Britain (RSGB) has released training materials for the upcoming 2019 exam syllabus for radio amateur licensing, expected to come into force this September and to include software defined radio (SDR) as a topic.

“We are pleased to publish the new Amateur Radio Examination Syllabus so that you can prepare for its adoption in September 2019,” writes RSGB Examinations Standard Committee chair Tony Kent. “In order that you can start preparing your new training materials we have provided documents to help you see what material in Syllabus 2019 at each of the three levels is completely new, what’s been removed from the syllabus entirely and what’s been moved between levels.”

The new software defined radio topics, which have not previously formed part of the licensing exams, are introduced at all three licence levels: Foundation, Intermediate and Full. Those studying for the Foundation licence need only understand the core concepts; Intermediate exams will require knowledge of the purpose behind Fourier transforms, digital filters, the difference between time domain and frequency domain, the identification of simple harmonic waves, and the ability to identify elements of an SDR on a block diagram; while the Full licence exam goes into additional depth.

The RSGB’s documentation, which include a full syllabus specification, model tutorial slides, and information on what has been added, removed, and substantially modified from previous syllabi, can be found on the organisation’s website.

“NPR (New Packet Radio) is a custom radio protocol, designed to transport bidirectional IP traffic over 430 MHz radio links (ham radio),” the creator explains of his project. “This protocol is optimised for ‘point to multipoint’ topology, with the help of managed-TDMA. Bitrate is up to 500kbps (net, effective bitrate). The radio modem is cheap (~$80) and home-made, with a 433 MHz ISM module inside. The modem is connected locally with Ethernet, therefore no specific software is needed on PC. The modem is easy to build and reproduce.

“You can add a DMR radio amplifier in order to achieve 20 W radio power or more. The main usage is an extension of HSMM – Hamnet networks. All the project is open-source: hardware, software, protocol specification.”

More details are available on the Hackaday project page.