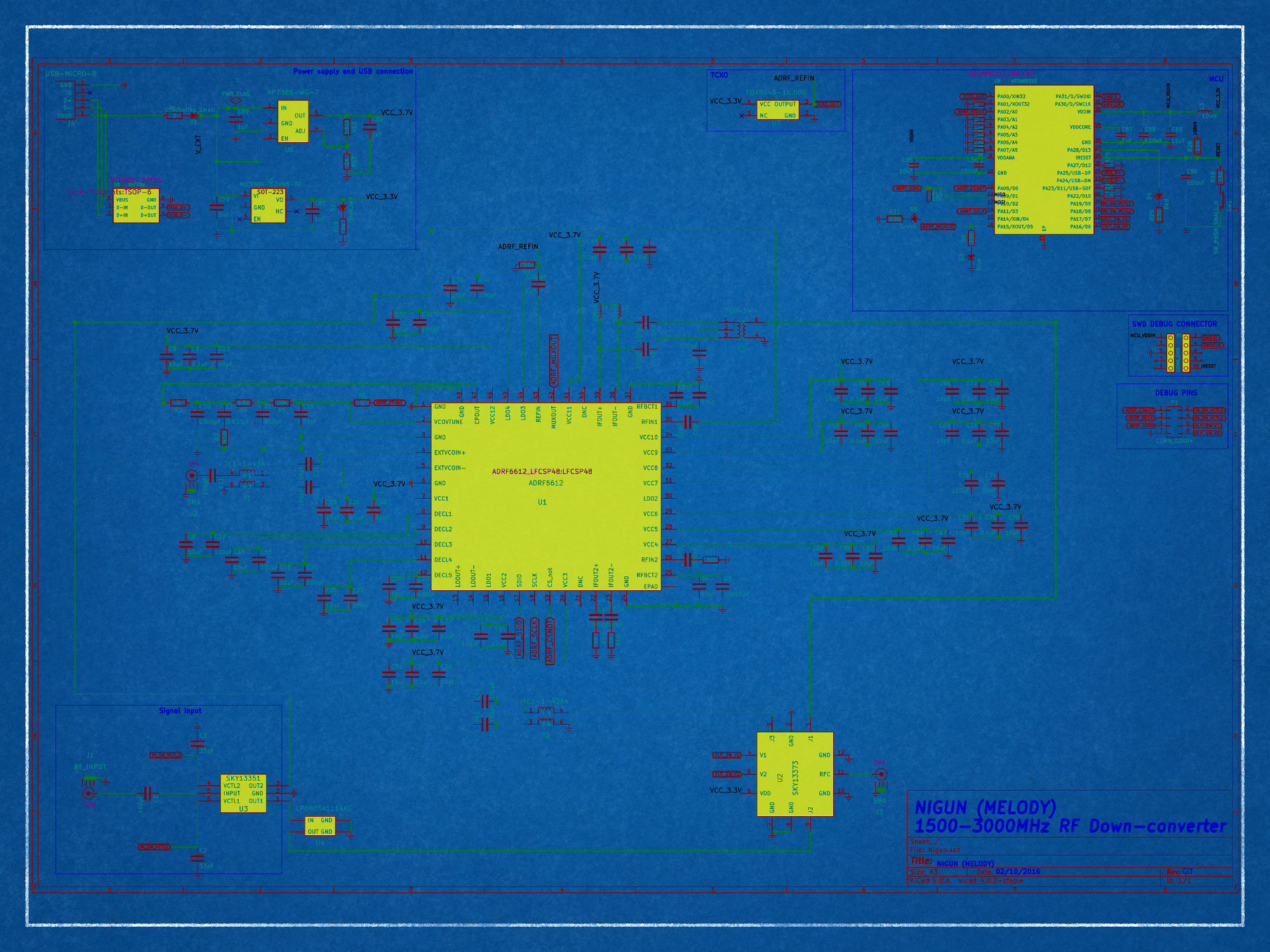 Engineer Raziel Einhorn is ringing in the new year with the production of a prototype open-hardware 1.5-3GHz downconverter, designed to allow lower-frequency radio hardware to receive high-frequency signals.

Brought to our attention by the RTL-SDR project, Raziel’s Nigun (Melody) project is based around the Atmel SAMD ARM-based microcontroller and includes a dynamic local oscillator (LO), a voltage-controlled oscillator (VCO) running from 200-2,700MHz. and support for downshifting frequencies as high as 3GHz.

Raziel is producing the first hardware prototype from his design this month, following completion of the PCB design. The final licence for the project has yet to be decided, with Raziel leaning towards the CERN Open Hardware Licence (OHL) v1.2. Those eager to get started with the Nigun can contact Raziel for immediate licensing.

The impressive build, written up in detail on Hackaday, is designed to be high-performance at a very low cost: the bulk of components come courtesy a junkyard, with a car’s rear wheel bearing providing rotation and the frame being entirely constructed from scrap metal and tubing. The system can be seen in operation on YouTube.

On the software side of things the Lime Suite has been updated with a handful of improvements and bug-fixes including support for the SOAPY_SDR_ONE_PACKET flag and an official changelog to make tracking of new features significantly easier.

Those running on Ubuntu Linux and derived distributions can, as always, install the latest version of Lime Suite from the Myriad-RF personal package archive (PPA); if you’re the type to build from source, there’s now a new Stable source tree to ensure you get the most polished code possible. Other download links can be found on the project wiki.

The Pothos project is currently working steadily towards a 0.5.0 release, but before upgrading users should take some time to understand changes centring around the serialisation format which will mean potential compatibility issues.

Pothos 0.5.0, pre-release notes in the project’s changelog detail, will do away with the traditional reliance on a separate pothos-serialization dependency in favour of an in-library solution. The result is smaller and cleaner code, but it brings with it a change to the serialisation format which will require testing with any projects depending on Pothos’ serialisation.

Additional changes due in 0.5.0 include an application programming interface (API) for parsing sources for block descriptions, a plugin loader based around configuration files and supporting JSON topologies, Just-In-Time (JIT) compilation, and block descriptions. Its launch will come some time after the next point release, Pothos 0.4.2, which includes minor bug fixes.

LimeSDR user Jiang Wei has posted another project to the Myriad-RF Discourse forum, demonstrating how the LimeSDR can be used to transmit audio playing in Foobar2000 on Windows over FM frequencies to an RTL-SDR receiver.

Fresh from adding LimeSDR support to MATLAB, as covered in the final OTA of 2016, Jiang has developed a plugin for Foobar2000 on Windows which allows the streaming of audio through a connected LimeSDR. To prove it works, Jiang then connected a low-cost RTL-SDR dongle to the same machine to receive the stream.

The Defense Advanced Research Projects Agency (DARPA) has published details of AMEBA, a project investigating the use of ultra-low frequency electromagnetic waves to expand wireless signal transfer into the underwater and below-ground realms.

Known as A Mechanically Based Antenna (AMEBA), DARPA’s project is claimed to offer considerable potential for getting signals into areas which would previously have been complete black-spots. “If we are successful, scuba divers would be able to use a ULF channel for low bit-rate communications, like text messages, to communicate with each other or with nearby submarines, ships, relay buoys, UAVs, and ground-based assets,” programme manager Troy Olsson explained, “[while] through-ground communication with people in deep bunkers, mines, or caves could also become possible.”

Finally, our friends at the Osmocom project have put out a call for participation, and sysmocom is putting up 50 nano3G femtocells with five SIM cards apiece as encouragement for developers and engineers to work on improving the project’s 3G and 3.5G cellular capabilities.

The call for participation asks for technically-skilled users, developers, and engineers working either as individuals or with a recognised non-commercial research institution to look towards aiding with Osmocom 3/3.5G development itself, improving the documentation, or publishing a research project based around the platform. As an incentive, selected applications received before the 31st of January will be chosen to receive nano3G femotocell hardware and compatible SIM cards.

Those eager to apply can submit their proposals to accelerate3g5@sysmocom.de.