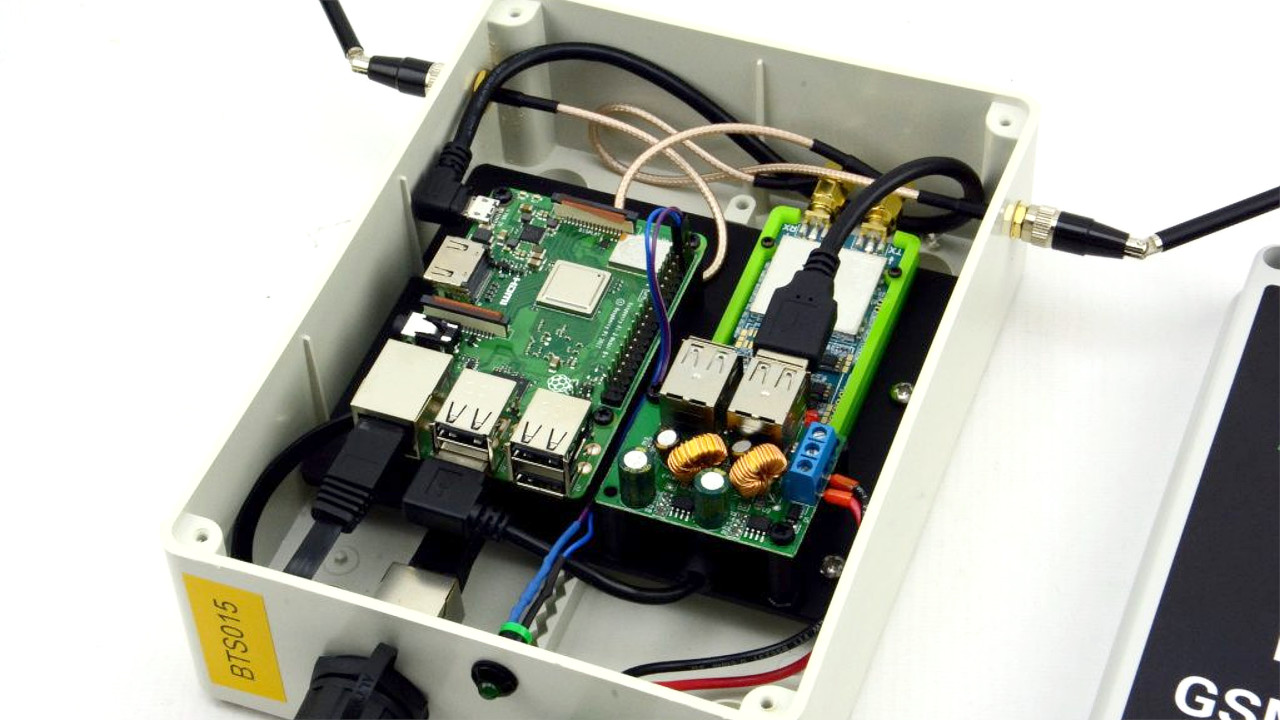 LimeSDR units will be a key feature of this year’s Electromagnetic Field (EMF Camp) event, taking place in the UK this weekend, powering a local GSM cellular network for attendees’ use.

Part camping festival, part gigantic temporary hackspace, Electromagnetic Field is this year held in Eastnor, UK, and on top of the usual Wi-Fi connectivity and power grid there’s a GSM-based cellular network powered by LimeSDRs. “When the organisers got in touch to ask if we could help out with providing the infrastructure for a self-contained GSM network, we couldn’t resist lending our support,” explains Andrew Back.

“The solution we came up with is based around the LimeSDR Mini board paired with a Raspberry Pi 3 Model B+ host, which will run Linux together with a fully open source GSM base station (BTS) stack courtesy of the Osmocom Cellular Network Infrastructure software. Power is provided via a 24V mains adapter and a DC-DC converter integrated into the weatherproof enclosure providing 5V to the Raspberry Pi. Since these will be mostly mounted outdoors and rain is a common feature of the British weather, IP67 rated DC power, Ethernet and SMA connectors were used to prevent against water ingress.”

More information on the network, along with a talk to be given during the event by Lime principal RF design engineer Dr. Danny Webster, can be found on the Lime Micro website.

The LimeSDR has gone further than a field in the UK, though, with the MarconISSta team having successfully had a LimeSDR and Astro Pi-equipped Raspberry Pi installed and activated on the International Space Station this month.

Named for ‘marconista,’ the Italian for radio amateur, the Technische Universität Berlin project sees a LimeSDR installed on-board the International Space Station to analyse global spectrum usage in UHF, VHF, L, and S bands, along with detection of interefers and assessments of the ARISS module antennas’ radiation pattern on board the Columbus module.

“After the first few days, many interesting recordings have been made,” the team explain in their week-one update on the project post-installation. “The main goal of MarconISSta is to develop heat maps of the global use of spectrum. One challenge that we identified early in the development of the visualisation tools is how to handle recordings that result from the system itself and recordings that are special for the ISS. The system has some internal ‘noise’ in the form of DC offset, oscillator artefacts etc. that are constantly seen in the recordings. Obviously, these have to be neglected for the global heatmap.

“Additionally, there are transmissions that are only sent when the ISS is passing over a certain region. With having ESA astronaut Alexander Gerst on the ISS, there are more European school contacts than usual. Should these school contacts be added to the global heatmap or not? Additionally, the high power responses of the radio operators aboard the ISS should not be included in the global heatmap. Due to these reasons we might need some time to publish the first scientifically relevant heatmaps.”

Full details, and regular updates, on the project can be found on the official website.

The draft schedule for OsmoCon 2018, the annual Osmocom open-source mobile communications conference, including information about support for LimeSuite in OsmoTRX.

Taking place on the 18th and 19th of October at Hotel Albrechtshof in Berlin, OsmoCon 2018 includes tasks from Anthony Timson on operating a real-world roaming GSM network using Osmocom, two different handover systems by Neels Hofmeyr, monitoring and key performance indicators (KPI) in Osmocom by Daniel Willmann, and of particular interest to LimeSDR users a talk by Pau Espin on the addition of LimeSuite support into the OsmoTRX transceiver platform.

Tickets for the conference are available now from the official website, while community attendees without commercial backing can quality for a community discount.

“Current planning regulations severely restrict the ability of licensed Radio Amateurs to erect experimental aerial systems. We the undersigned require the government to amend the law to exempt all licensed Radio Amateurs (and C.B. radio users) from requiring planning permission for their aerials,” Gary writes in an official petition to Parliament. “Amateur Radio is a fantastic hobby for those who wish to learn about electronics and radio; and it can provide emergency communications when other systems fail.

“The experimental nature of the hobby allows people to design and build their own radios and aerial systems. Unfortunately, erect any kind of aerial and there is a chance you will be required to apply for planning permission. Change the aerial for a new design, and you will be back to square one. Planning law needs to change!”

Gary’s petition is available for UK citizens to sign at the official Parliament Petitions website, where it has at the time of writing attracted nearly 4,000 signatures of a required 10,000 minimum to receive a governmental response.

“GNU Radio is perhaps the most important bit of any software defined radio toolchain,” writes Hackaday’s Brian Benchoff. “This is the software that provides signal processing blocks to implement software defined radios. GNU radio is how you take a TV tuner USB dongle and pull images from satellites. You can use it for simulation, and GNU Radio is widely used by hobbyists, academics, and by people in industry.

More information, and a link to the event, is available on the Hackaday website.

“This work aims at using measurements to evaluate the performance of Bluetooth 5 and to make the findings available to Rutronik Elektronische Bauelemente GmbH in the form of a white paper,” the paper’s introduction explains. “The results show that Bluetooth 5 with encoded PHY (125 kbps) improves the communication throughput with low throughput. However, these improvements do not confirm the promised 4-way range of the Bluetooth specification. In addition to the floor reflection and environmental conditions, the walls and the furniture, depending on the material, very much reflect the Bluetooth radio signal.

“A maximum range of 527 meters has been achieved outdoors. This is quite sufficient to use the low power sensors, such as moisture sensor in agriculture, to monitor the plants at a maximum distance of 527 meters. Thus, the sensor values can also be read with a smartphone, tablet or laptop from a great distance and, for example, forwarded to a cloud for processing. Inside, the maximum range was 60 meters.”

The full white paper can be found on Rutronik’s website (free registration required.)

IEEE Spectrum has published a piece claiming that the US Federal Communication Commission should “count devices as well as people” when it comes to valuing portions of the radiofrequency spectrum.

“The FCC needs to start thinking beyond cellphones and people: We are now building a world of connected devices, where sensors, appliances, drones, and tractors need cellular connections too,” explains Stacey Higginbotham in her piece for the publication. “Historically, the agency and spectrum buyers have arrived at a price for spectrum based on how many people it could cover. Thus, prices are measured relative to “MHz pops” (megahertz passing one person). So if you have 3 MHz capable of reaching 2 million people, you designate that as 6 million MHz pops.

“The FCC should focus on devices or uses rather than number of people covered. It would be a more complex valuation equation, but if done right, it would more accurately reflect the ways wireless connectivity can add value beyond ordinary telephony. The NFL might offer fans access to a wireless sensor network that tracks players’ statistics live on the field, or, taking stock of inventory, sends them to the nearest place to get a hot dog.”

The full piece can be read on the IEEE Spectrum website.

The WhiteSpace Alliance, meanwhile, is calling on telecommunications regulators to adopt bi- and multi-directional spectrum sharing in order to expand global access to electronic services.

“Allowing devices to share spectrum is not only feasible, it has become the new reality,” explains Dr. Apurva N. Mody, WhiteSpace Alliance chair, in a call for telecommunications regulators to rethink spectrum sharing. “There is no longer a need to view traditional broadcast spectrum as a finite, static resource. Use of shared spectrum methodologies such as TV whitespace can dramatically accelerate efficient delivery of critical services. What’s needed now is widespread adoption of telecom regulations that foster greater network access and innovation.”

The WhiteSpace Alliance, naturally, has its own implementations of spectrum sharing systems, including the IEEE 802.22 Wi-FAR standard and WSAConnect interoperability specification. More information is available on the official website.

Finally, Hackaday has highlighted a novel hardware project designed to bring set-top-box like live-rewind capabilities to radio, rather than just TV: the Radio Rewind Button.

A design by Pier42’s Wolfi Friedrich, the Radio Rewind Button has but one purpose: to allow you to rewind and replay ‘live’ radio broadcasts. “This idea started with my wife wishing to catch a piece of talk in the radio where we missed the beginning of the story or one of her favourite songs playing that she would like to hear from the beginning right now,” Wolfi explains. “Putting 1+1 (idea + implementation) together, this is the perfect entry for this year’s [Hackaday prize contest]. Makes her happy and gives me an exciting and challenging project.

“The base platform is going to be a Digilent Arty S7 board which provides 256MB of SDRAM already, so I don’t have to do the risky SDRAM over PMOD interface. The daughter card with all audio circuit will be in a Arduino Shield form-factor for potential later re-use. With 256MB of memory all used in one big ring buffer and assuming 44.1 kSamples/sec, my math adds up to just under 25 minutes of rewind time, which should be plenty.”

More details can be found on the Hackaday project page.