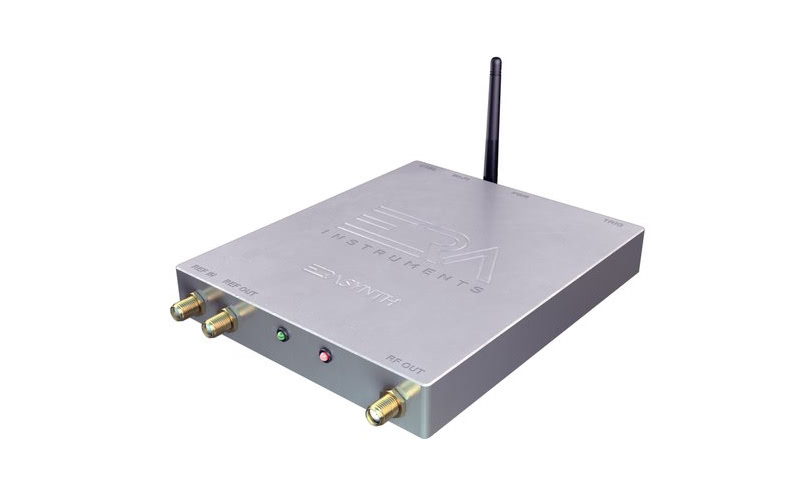 Designed to appeal to everyone from hackers and students to professors and professional engineers, the ERASynth’s specifications are undeniably impressive: the entry-level ERASynth can generator signals from 10MHz to 6GHz, while the ERASynth+ boosts the range from 250KHz to 15GHz. The devices have a number of uses in both the lab and the field, including as a source of test signals to check calibration and functionality of software defined radios like the LimeSDR.

Boasting a multi-loop architecture claimed to reduce integer-boundary (IB) spurs and reference phase noise and with a Wi-Fi-powered browser-based user interface compatible with devices from smartphones upwards, the ERASynth design is to be released under an as-yet undisclosed permissive licence – both the underlying software and its hardware schematics. The ERASynth is priced at $499 with the ERASynth+ priced at $749 (around £388 and £582 respectively), and the team is currently 21 percent the way to its $40,000 funding goal on Crowd Supply.

The Pothos project has received a major update in the form of its milestone 0.5.0 release, including new application programming interfaces (APIs), a new loader for plugin configurations, and more.

Released at the tail end of April, Pothos 0.5.0 replaces point-release 0.4.3 as the current version. Unlike its 0.4-branch predecessor, 0.5.0 has a considerable list of changes to work through. Chief among these is the long-awaited removal of the pothos-serialization dependency in favour of a significantly smaller in-library alternative. For anyone relying on serialisation, though, the change brings with it a warning: the format has changed, requiring anyone working on projects dependent on the old format to adapt to its replacement.

Pothos 0.5.0 also includes a new configuration file loader for plugins, capable of loading JSON topologies, Just In Time (JIT) compilations, and block descriptions. APIs have been added for concatenating two plugin paths and parsing sources for block descriptions, while changes have been made to the BlockEval API to support the GUI evaluator and to the DocUtils API to support queries via GUI. Finally, compiler support and QFormat have been reimplemented, the latter improving its simplicity and adding various warnings.

As always, the latest version of Pothos can be found on the project’s GitHub repository.

Forum regular Tegwyn Twnfatt has cause to celebrate with a Hackaday Prize 2017 award for his LimeSDR-based femtocell cellular network signal repeater project.

Chosen as a winner of the first round of the Hackaday Prize 2017 event, Tegwyn’s project was first covered in brief during an OTA back in March, and demonstrates well how a software defined radio system can speed up research and development of hardware solutions – Tegwyn using the LimeSDR for educational and experimentation purposes as he works on a custom-built hardware solution to the problem of poor local phone signals.

It’s a problem Tegwyn is eager to solve, too. “There are currently available two groups of devices that already claim to [repeat cellular network signals], one of which is reassuringly expensive and the other is just plain illegal,” he explains in the project page. “This project aims to democratise the situation enabling cost effective, hackable devices to be built that not only work properly but also conform to the telecoms regulations.”

You can read more about Tegwyn’s project on its official page or discuss it with him in the Myriad-RF forum.

Anyone looking for a housing for their LimeSDR board is likely to be interested in a new 3D printed case featuring labelled ports for up to twelve SMA connectors and ventilation grilles to aid with cooling.

Aaron Paquette’s LimeSDR case design builds, in true open-hardware fashion, on an earlier design released by Thingiverse user Addy cDc featuring parts from Ben Pye, which in turn was based on this original design by Philip Hahn first discussed in an OTA late last year. Addy’s modifications include improvements designed to better fit the LimeSDR v1.4 board, grilles for improved ventilation, and spaces for fitting up to 12 SMA connectors within non-turning cutouts with each fully labelled within the case itself.

While Addy’s changes make an already impressive case more flexible and functional, Aaron found that they made the case more difficult to print on hobbyist-grade 3D printing equipment. His modifications aim to rectify that primarily by fixing floating pieces within the built-in labelling and a reoriented lid which no longer requires supports for successful printing. Aaron’s version requires no supports or rafts, is designed to be printed without infill, and is released under a permissive licence for further modification.

MATLAB users looking to get to grips with SDR-related projects should watch this video tutorial which presents a guide to receiving and decoding ADS-B signals.

Brought to our attention by RTL-SDR, the MATLAB video showcases the use of the Communications Systems Toolbox to capture Automatic Dependent Surveillance Broadcast (ADS-B) signals from passing aircraft and decode them for flight data including aircraft identifiers, position, velocity, and altitude.

The LimeSDR has been supported in MATLAB since late last year when Jiang Wei announced the release of a Simulink blockset and matched MATLAB functions. If you’re using MATLAB for the first time, ensure your LimeSDR is running the latest firmware and FPGA gateware and that you have an up-to-date LimeSuite installation.

Finally, Disney engineers have released a whitepaper on ultra-wideband ambient backscatter (PDF warning) which researchers claim could be the perfect solution for node-dense Internet of Things (IoT) deployments.

Backscatter technology is well established in industry: radiofrequency ID tags operate using backscatter, with tags receiving their power from the radio signals output by the reader. Such implementations are typically extremely short range, however, which is where Disney’s research and the promise of long-range communications with battery-free energy-harvesting backscatter nodes comes into play.

In the paper, written by Disney researchers Couchang Yang, Jeremy Gummeson, and Alanson Sample, previous research on long-range narrowband backscatter communications in a lab setting is taken out into the field and expanded to cover an 80MHz to 900MHz range. By tying in to 17 pre-existing ambient signal sources ranging from FM radio and TV broadcast towers to cellular network towers, the team was able to demonstrate communication with a remote node at a range of 50 meters and a 1Kb/s data rate.

While the researchers proved the efficacy of their system and suggested its suitability for deployment in metropolitan areas, thus far Disney has not suggested it has any plans to commercialise the technology.