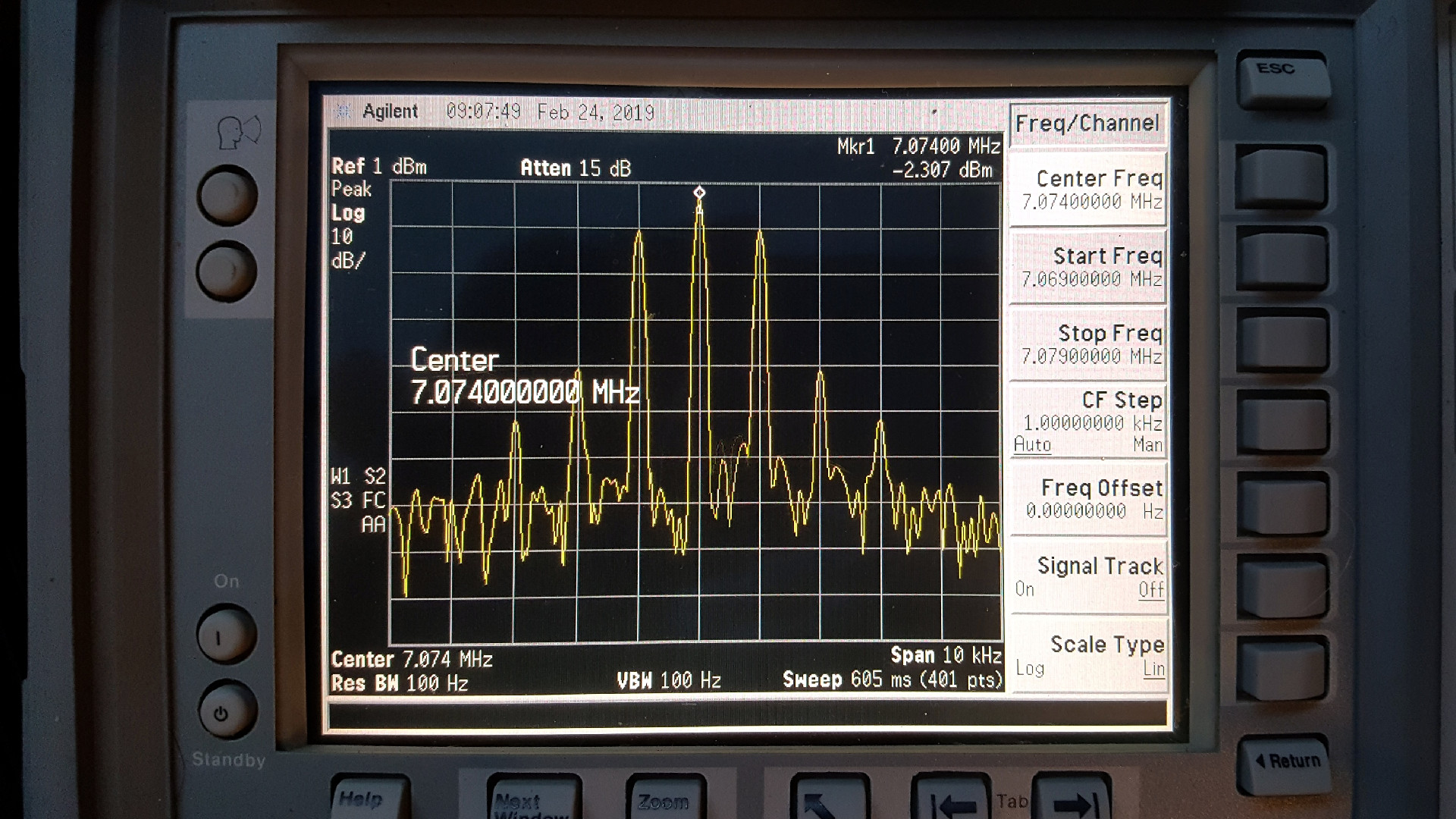 The amateur transponder on board the Es’hail-2 satellite, launched back in November, has been activated and qualified as ready for amateur use – and use it amateurs most certainly are.

The Tech Minds YouTube channel has published a video on the implications of it being the first geostationary amateur transponder, while Luigi Freitas has written of receiving the transponder’s signals using a LimeSDR Mini and “a crappy $7 LNBF powered with an improvised PSU that I made in 10 minutes […] WITHOUT a dish.”

For those outside the transponder’s coverage, the British Amateur Television Club (BATC) and AMSAT-DL are hosting a WebSDR instance.

Forum user Marty Wittrock has written of his experiments with high-frequency (HF) amateur radio transmissions using a LimeSDR, declaring himself “really impressed with the output of the Lime and SDRAngel.”

“For those that REALLY want to know what their LimeSDR is capable of on transmit I finally took matters into my own hands and took pics of the transmit power level right out of the Low Band port on the LimeSDR,” Marty writes. “Anyway, on AM at 90% modulation you can expect an output power of -6.7dBm at 75m, -2.3dBm at 40m, and 0.026dBm at 30m. There are a couple of pictures of what the Upper Sideband transmit level looked like and it was +2.34 dBm at 40m, +3.786dBm at 30m, so note that the power level is slightly higher using SSB than AM (as is true with all radios.

“This should go without saying, but if you plan to drive your LimeSDR with an amplifier, you need a low pass filter with a decent roll-off for the band of choice to eliminate the harmonics that are very prevalent in the spectrum. Obviously, the further out you go in frequency the spurs diminish, but 2nd and 3rd harmonics are strong enough to get transmitted – so use a LPF for your band of choice if you plan to ‘pump up the volume’. Overall, I was really impressed with the output of the Lime and SDRAngel. Really happy to see that the spectrum is about what you’d expect and very clean – no close-in spurs in the modulation.”

For those just getting started with a LimeSDR, the SignalsEverywhere YouTube channel has published a video on installing and updating the LimeSDR Mini under Windows 7 and Windows 10.

Designed for those who have only just received their LimeSDR, the SignalsEverywhere video walks through connecting it to a Windows system, installing the required drivers, and downloading and updating the latest firmware in a simple manner – the whole video is just four and a half minutes long.

The video is live on on SignalsEverywhere.

The Libre Space Foundation has announced the release of new satnogs-client and gr-satnogs builds, versions 0.9 and 1.5.1-2 respectively, for the SatNOGS open-source global satellite ground station network.

Among the improvements in satnogs-client v0.9 are support for demodulation of the Reaktor Hello World satellite, the inclusion of observation frequency in metadata, and a new option to set a manual power level range in the waterfall – though this brings a small bug of its own which is expected to be fixed in the next build.

The new gr-satnogs v1.5.1-2, meanwhile, includes a Golay (24, 12) decoder, a demodulating flowgraph for the Reaktor Hello World satellite, and a fix for the baudrate issue in BPSK gr-script.

More information is available in the official forum, while those looking to update their systems can find instructions on the wiki.

A call for submissions has been issued ahead of the GNU Radio Conference (GRCon) 2019, which takes place this September at the Space & Rocket Centre, Huntsville, Alabama.

The event organisers are calling for submissions for three presentation categories: talks, which are 20-30 minutes long with a five-minute question and answer session supported by a slide deck and a preference for real-world development and testing rather than simulation-only projects; tutorials, 40 minutes long with an educational bent; and posters, which “can display any type of material that you believe is interesting to the community.”

Those interested in presenting will find instructions on the official website, while more information on the GRCon event itself can be found here.

Facebook has released Magma, a new open-source cellular core networking platform with which it hopes to speed deployment and expansion of cellular networks into rural and private areas.

Written as part of Facebook’s founding membership in the Telecom Infra Project, the BSD Three-Clause-licensed Magma is a product of the Facebook Incubator programme. “Mobile packet cores are important infrastructure for any mobile network and can be complex to operate,” Facebook explains of the reason for its development. “Magma is not intended to replace existing EPC deployments for large networks. Rather, it extends existing network topologies to the edge of rural deployments, private LTE networks or wireless enterprise deployments.

Magma is available now on the Facebook Incubator GitHub repository.

Other Telecom Infra Project (TIP) members, including LimeSDR creator Lime Microsystems, have joined forces at Mobile World Congress (MWC) 2019 to run an end-to-end (E2E) cellular network demo – including the use of a LimeSDR-powered LimeNET CrowdCEll device.

“Many of these TIP technologies were first proven and tested in TIP Community Labs around the world, achieving important milestones on the way to production deployment,” claims TIP executive director Attilio Zani of the demo’s participants. “Now, for the first time, TIP is showing how its technologies fit together across a telecom network. Together, this suite of solutions utilises a software-centric, vendor-neutral approach that highlights the value of disaggregation and the power of interoperability for more agile, cost-efficient networks.”

Techcrunch reports on an MWC satellite communications demo with a difference: the ground stations are nothing more than unmodified off-the-shelf cellular smartphones.

“Utilising a constellation of satellites in low Earth orbit, Ubiquitilink claimed during a briefing at Mobile World Congress in Barcelona that pretty much any phone from the last decade should be able to text and do other low-bandwidth tasks from anywhere,” writes Techcrunch’s Devin Coldewey, “even in the middle of the ocean or deep in the Himalayas. Literally (though eventually) anywhere and any time.

“The theory became a reality earlier this year after Ubiquitilink launched their prototype satellites. They successfully made a two-way 2G connection between an ordinary ground device and the satellite, proving that the signal not only gets there and back, but that its Doppler and delay distortions can be rectified on the fly.”

Ubiquitilink aims to launch a globe-spanning constellation of ultra-low-orbit satellites, extending cellular coverage globally without the need for special hardware on the ground, connection to which will be sold to network providers. The system will also support calling and messaging emergency service numbers, entirely free of charge, along with a built-in emergency broadcast system for disaster response. More information is available on the Ubiquitilink website.

Finally, Hackaday has brought to our attention the publication of nine MIT Radio Society lectures in video form on YouTube.

“These aren’t some five minute quicky videos, either,” writes Hackaday’s Al Williams. “They are basically live captures that run anywhere from an hour to almost two hours in length. The topics are a great mix including radio history, software-defined radio, propagation, radio astronomy, RADAR, and even 5G.”

All nine lectures – An Introduction to Radio Experimentation, Technology, and History; Baba Yaga’s Hut: A Laboratory Experience in Signal Modulation and Phasor Analysis; Software Defined Radio; The Ionosphere, Shortwave Radio, and Propagation; Experimental Radio Astronomy; The Final Frontier: Unveiling the Low Frequency Universe Through Space Based Radio Astronomy; Principles of Radar; Space Weather Observations and Phenomena; and 5G, Cellular Communications, and the Future of Radio – are available now in a playlist curated by the MIT Student Cable YouTube channel.