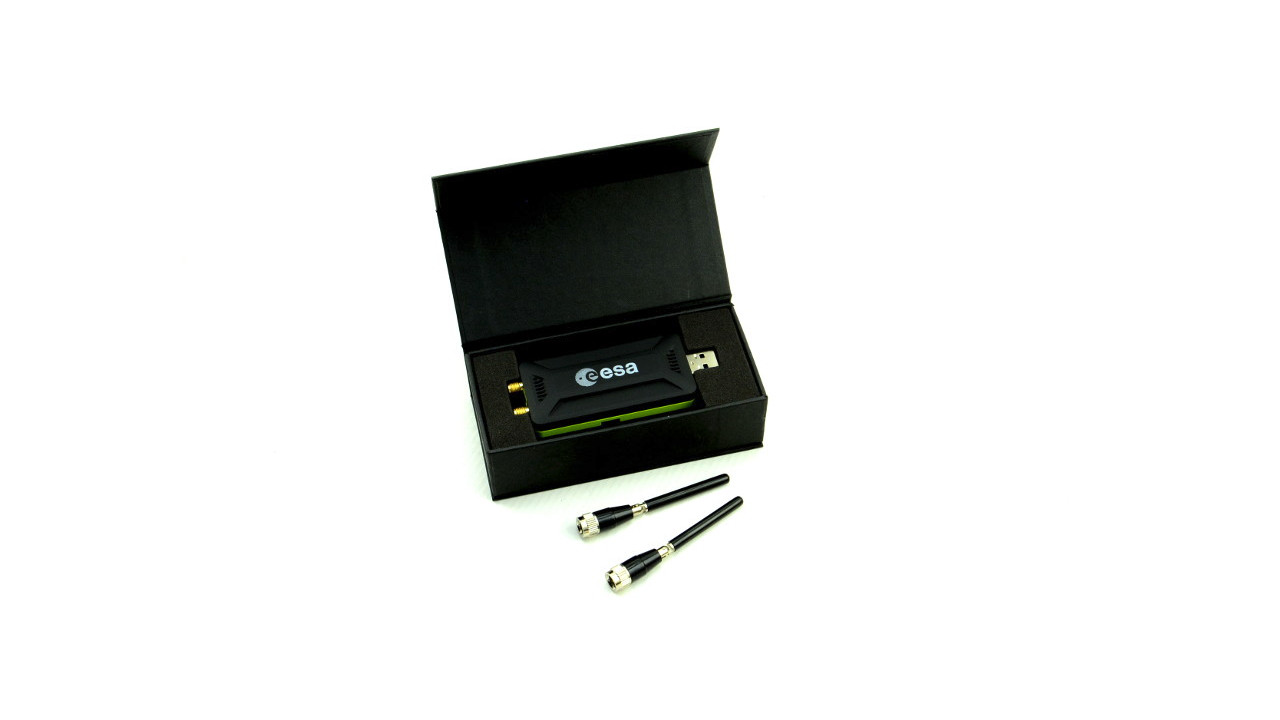 The Field Report Contest is now complete, and we have a winner – named in a live drawing at Crowd Supply’s headquarters earlier this month.

Designed to highlight the amazing projects the community has built around the LimeSDR family of software defined radios, the Field Report competition saw some strong entries. Daniel Estévez wrote about his miniature ground station for QO-100 communication, Godfrey Laswai detailed his experiments with rural Digital Audio Broadcasting (DAB), Andrin Doll offered a look at LimeSDR’s application in experimental science at CEA Saclay in France, while Ogun Levant wrote about the drone-jamming Dronesense project.

There could be only one winner, however, and the lucky recipient of the LimeSDR Mini – chosen by Crowd Supply’s Josh Lifton at random from those who contributed a Field Report to the contest – was the OreSat open-source satellite project, detailed in a post by Andrew Greenberg and Glenn LeBrasseaur.

More information on the drawing, and a recording of the livestream, can be found on the LimeSDR Mini Crowd Supply campaign page.

Daniel Estévez has written up his experiments with reception and transmission of the QO-100 geostationary satellite in more detail, offering a look at both the hardware and the software he’s been using.

This post was soon followed by one detailing the software in use. “For receiving the downlink, I want to use Linrad because I am a huge fan of that SDR software. I have been using it for all sorts of things, some of which you can see in other blogposts. Thus, it seems natural to use the Linrad network protocol to stream data from the BeagleBone Black,” Daniel writes.

“Since Linrad’s transmit capabilities are not so developed, I am using GNU Radio for the uplink. Most of the time, I will use a GNU Radio flowgraph that gets audio either from my microphone or another application (such as fldigi or WSJT-X) using PulseAudio, filters it to an SSB bandwidth and modulates it on the correct frequency of the transponder. Thus, the GNU Radio flowgraph is essentially an SSB transmitter covering the complete transponder. Using GNU Radio opens up the possibility for other experiments, such as running a digital transmitter implemented completely within GNU Radio.”

As well as the blog posts, Daniel has set up a GitHub repository to make it easier for people to follow in his footsteps.

Applications for the SDR Satcom Developer Kit, sponsored by the European Space Agency, are now open for those looking to work with open-source satellite communications projects.

“Individuals, open source projects and organisations may qualify to receive free developer hardware as part of the European Space Agency sponsored SDR Satcom initiative,” the SDR Satcom site explains. “Projects which have previously received support are also invited to apply, where this will enable new contributors and further development.

“Please note that where applicants are not formally associated with a relevant project or organisation, some evidence of experience developing software defined radio applications will be required. In such cases please include a link to a GitHub/GitLab or similar profile/repository which will provide this, along with a suitably detailed description of the proposed project. Finally, if you have no relevant prior experience, but are keen to contribute, we recommend that you contact an existing project with a view to becoming a contributor and see if they will make an application on your behalf.”

Those interested in applying need only agree to publish their applications under a recognised open source definition; distribution via the Snap-based SDR Satcom app store is welcomed, but not mandatory. Full details, and a link to apply, can be found on the SDR Satcom website.

Inside GNSS has published a write-up looking at Simultaneous Tracking and Navigation (STAN), a positioning system based on low-Earth orbit (LEO) satellites which can be used when traditional GPS signals aren’t available.

The write-up goes on to detail experimentation carried out by Professor Zak M. Kassas, Joshua J. Morales, and Joe J. Khalife for the Office of Naval Research, in which ground- and air-based vehicles were cut off from GPS signalling and the navigational error measured. Navigational errors of more than 3.7 kilometres for the ground vehicle were reduced to 192.3 metres using STAN; the unmanned aerial vehicle test, meanwhile, reduced navigational errors from 123.5 metres to 29.9 metres – and was improved still further using periodically-transmitted satellite positional data.

The full article is available on Inside GNSS.

Hackaday has drawn our attention to a new video from Alan Wolke, detailing how a pulse-counting detector can be used for frequency modulation (FM) signal demodulation.

“This video describes how a Pulse Counting FM Discriminator works,” Alan writes. “It is a unique FM demodulator that doesn’t require any tuned circuits like the FM Ratio Detector or Foster Seeley discriminator. It operates by measuring the changing duty cycle resulting from a series or fixed width pulses that are synchronized to the carrier, or IF frequency.”

Alan’s video begins with an explanation of the concept behind a pulse-counting FM demodulator, and why it typically requires down-conversion from the original carrier frequency to work. He then details circuits which take the FM input and pass out the demodulated audio in as simple a manner as possible.

The video is available on Alan’s YouTube channel, while the matching show notes can be downloaded as a PDF.

Semtech and Internet of Things (IoT) specialist Definium Technologies have announced the opening of a state-wide LoRaWAN network in Tasmania, hoping to make the region a hotbed for IoT experimentation.

“We decided to take on the challenge of rolling out a statewide enterprise-grade LoRaWAN network,” explains Definium chief executive Mike Cruse of the project. “We want to encourage people to come to Tasmania and test their IoT solutions, then deploy them around the state with enterprise-grade reliability. Tasmania is the ideal life-sized laboratory at scale where individuals and businesses of all scales can experiment with next-generation IoT applications, such as applying intelligent sensors to asset management, agricultural, horticultural, and aquaculture use cases.”

“The increasing deployment of large scale LoRaWAN networks using Semtech’s LoRa devices reflects a trend toward the growing adoption of IoT globally,” adds Semtech’s Marc Pegulu. “Definium’s deployment in Tasmania will expose businesses, students and potential developers to IoT, and is expected to bring thousands of devices online to enable smarter solutions in a variety of vertical markets.”

More information on Definium’s Tasmanian network can be found on the company’s official website.

The UK Government has announced the launch of its Rural Connected Communities (RCC) competition, which will fund up to 10 research and development projects to encourage 5G adoption in rural environments.

“These projects will trial innovative use cases and technical solutions to build the business case for investment in rural connectivity and explore the capabilities of 5G to benefit rural communities,” the UK Department for Digital, Culture, Media, and Sport (DCMS) explains in its launch announcement. “They will also help demonstrate demand from a variety of economic sectors and rural communities for 5G technologies.

“Connectivity applications are expected to show a combination of societal and economic benefits that will together create a stronger case for investing in the deployment of 5G infrastructure for rural areas.”

The competition is open to UK-based consortia including those from the public, private, and third sectors, as well as academia. Entries close on the 25th of October, with shortlisted applicants interviewed in late November and early December before those selected to participate are notified towards the end of the year. The grants available under the programme, meanwhile, will be claimable from the 1st of January 2020 through to the 31st of March 2022.

More details are available on GOV.UK.

AMSAT’s Michelle Thompson has announced an initiative to lease 1 MHz of bandwidth on the EchoStar 09 geostationary communications satellite, as a means of providing an experimentation and development platform covering the US.

“An arrangement on EchoStar 9 for 1 MHz of bandwidth for up to 4 years of USA+Mexico+Canada coverage is on offer for $2000 a month,” Michelle explains in a posting to the amsat-bb mailing list. “I’m putting together a grant proposal for ARRL, FEMA, and others to pay for at least year of access. I’ve gotten some positive feedback already. I think we can make this happen with some fundraising effort. I’m willing to provide the human resources and whatever incidental financing needs to happen to secure a grant for rental.

“The main purpose of this type of system would be to enable field deployment of ‘legacy mode’ aggregators, like the Phase 4 Ground ARAP (Amateur Radio Access Point). This is where traffic on any ham band, using FM or analogue gear, is digitised by a local “collecting” repeater, and is then sent to a satellite from that repeater. FEMA and ARRL have expressed a lot of interest and support for this in the past. Phase 4 Ground needs an ARAP in order to support legacy radios.

“I think it’s worth it to provide a US-based way to design, deploy, test, and use real world aggregator equipment. We learn a lot about GEO comms and figure out a lot of the ins and outs.”

Michelle’s posting can be found on the amsat-bb mailing list. The EchoStar 9 satellite launched in 2003 and is currently at the end of its projected 15-year lifespan.

AMSAT-UK and the British Amateur Television Club (BATC) have announced the availability of a new web-based software defined radio, installed at the Goonhilly Earth Station, for 144-146 MHz operation.

“[The WebSDR] is being provided in collaboration with Goonhilly Earth Station where it is kindly hosted alongside the existing receiving equipment for the amateur radio transponders on the Qatar-Oscar-100 (QO-100 / Es’hail-2) geostationary satellite,” AMSAT-UK explains. “It shares the same Turnstile antenna that is used for the reception of the AO73, EO88 & JO97 CubeSats.

“Being located in the far South West of the UK, it is anticipated the SDR will be useful for early Acquisition of Signal (AOS) of 144 MHz downlinks from amateur satellites and the International Space Station (ISS). Additionally it can be used for reception of tropospheric signals from the south – the Spanish beacon ED1ZAG on 144.403 MHz has been already been heard on the system.”

The WebSDR is available now on the BATC website, and joins the earlier 10 GHz QO-100 installation.

RTL-SDR has highlighted updates to the Meteor Demodulator plugin for SDR# and its linked M2 LRPT Decoder utility.

Finally, artist and designer Richard Vijgen has built a system which draws an artistic representation of nearby radio signals in real-time – bringing the hidden world of Wi-Fi networks to life.

“The piece, called Wi-Fi Impressionist, is composed of an antenna that picks up the signals, a tiny computer to process them, and a device that can draw a representation of those signals,” writes Fast Company’s Katharine Schwab of the project. “As the antenna scans the world around it, it picks up on devices sending data through Wi-Fi. The computer then translates the horizontal and vertical angle of the antenna combined with the strength of the signal into a point on the page—effectively creating a visual illustration of each signal.”

“The work consists of a directional antenna on a pan-tilt mechanism that listens for Wi-Fi signals and builds a three dimensional model of the signals around it,” explains Richard. “From this model a viewport is selected that defines the perspective and the frame. Signals that are picked up within the frame are visualised as waves emitted from a specific origin and drawn using a mobile plotter. The antenna and the plotter are both mounted on a tripod and can be placed in the field much like a painter would set up his easel. Once positioned and oriented a drawing becomes denser over time depending on the density of networks around it. Wherever there is a Wi-Fi signal, the drawing will eventually fill the frame.”

Examples of the device’s output, which is drawn using data gathered by a Raspberry Pi single-board computer and 2.4 GHz Yagi antenna, can be found on the Wi-FI Impressionist website.