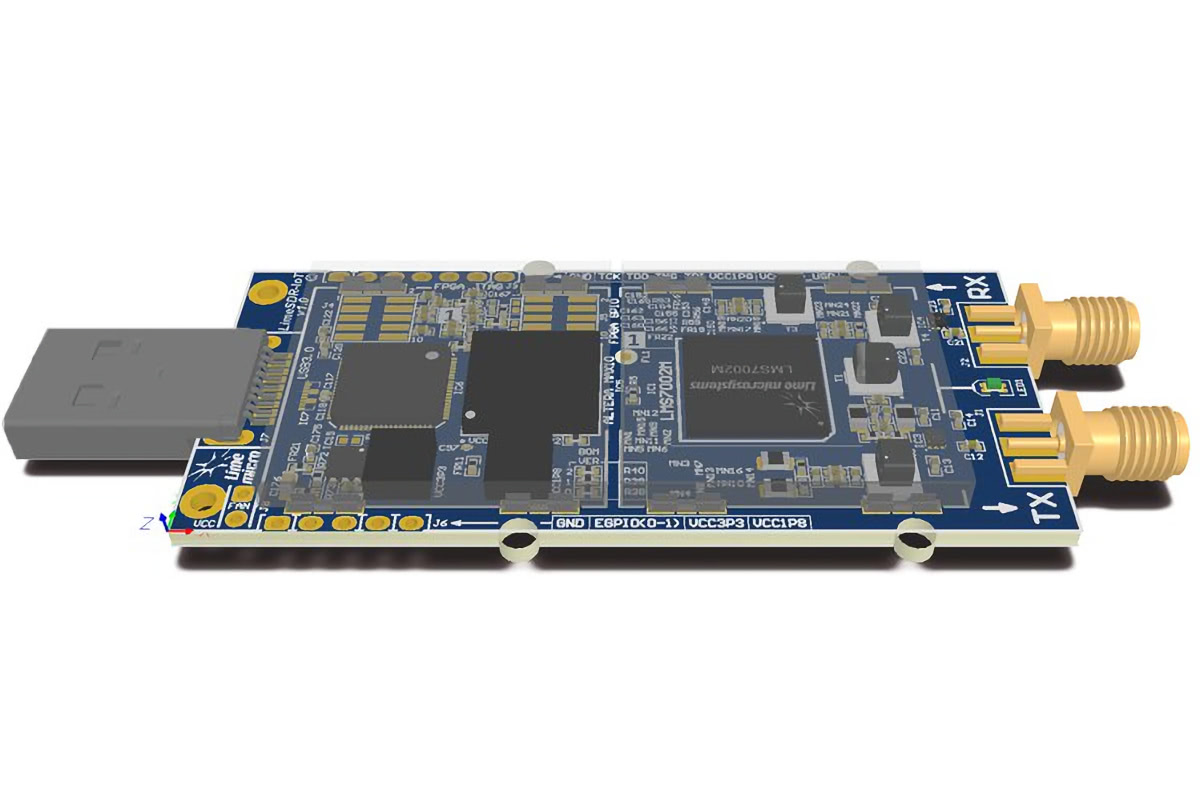 Shipping of the LimeSDR Mini continues apace, with all crowdfunding orders and many outstanding post-campaign pre-orders expected to have been filled within a week of this post – and there’s going to be enough stock left over for latecomers, too.

In a shipping update on the Crowd Supply campaign page, the team behind the LimeSDR Mini confirmed that over 300 boards have shipped to backers so far with another 900 arriving at Crowd Supply’s fulfilment facility earlier this month. Shipping is ongoing, but all crowdfunding backers and a large number of post-campaign orders are expected to receive their shiny new SDRs within a week.

The LMS8001 Companion Board, which boosts the frequency range of the Lime SDR Mini, is also under active shipping: 50 units had been sent to backers by the start of March, with a further 100 units winging their way since.

Those who have not yet received their LimeSDR Mini, or who are on the fence about buying one, can whet their appetite on a review of the board by Hackaday.

“In just the time that it has been on the bench here, the Mini has opened a significant new vista over an RTL-SDR, and given a few months in which to play with GNU Radio will I am sure provide both some useful radio applications and a seriously interesting learning process,” writes Hackaday editor Jenny List of the board.

“Previous SDRs at the budget end of the market […] have all remained somewhat expensive purchases, ones a typical radio amateur might have had difficulty concealing from their partner in the family accounts. With a price point that is almost edging into the realm of an impulse purchase, the Mini has the potential to become an SDR transceiver for everyone. If you have been holding back because of the price, maybe it’s time you gave it a look.”

Linux.com, meanwhile, has written of the recent partnership to put LimeSDR Mini devices in the hands of satellite radio developers with a view to finding novel applications to run on European Space Agency (ESA) satellites.

“Other applications will include IoT networks controlled by fleets of small, low-cost CubeSat satellites. CubeSats, as well as smaller NanoSats, have been frequently used for open source experimentation. The applications will be shared in an upcoming SDR App Store for Satcom to be developed by Lime and Canonical.”

Eric also makes mention of the LimeSDR Mini’s compatibility with the Raspberry Pi and other affordable single-board computers, in particular via the Grove Starter Kit developed in partnership with Seeed Studios.

If you’re a campaign backer who has already received your LimeSDR Mini and you have access to a 3D printer, you can now accessorise the board with a cleverly-designed case published on Thingiverse.

Designed for home printing or submission to professional 3D printing services, Jassca’s LimeSDR Mini Case snaps over the LimeSDR Mini circuit board while retaining access to the antenna and USB connectors. A variant by Quas7 modifies the design slightly with groove and sprung clip for a tighter closure. Both include ventilation grilles, though for those using the LimeSDR Mini in a high ambient temperature environment an additional heatsink may be required for maximum reliability.

Elsewhere on Thingiverse user Mike Karliner has published the design for a discone antenna hub, designed to make it easier to construct your own discone antenna for use with software defined radios.

“The discone antenna is remarkable in that it is capable of receiving and transmitting over a wide range of frequencies with good matching. Because of this, it is a good match for SDR receivers such as the popular RTL-SDR sticks,” Mike explains. “The only really tricking thing about making a discone is that the disc has to be balanced at the very top of the cone, which is mechanically awkward.

“The two parts here allow the cone to be solidly clamped and provide an adequate base for the disk. There [are] also two holes [to] bring the coax centre and braid out to the disc and cone. The base part has a socket at the bottom for 25mm (1 inch) plastic conduit for mounting.”

Asimina Kiourti, assistant professor of electrical and computer engineering at the Ohio State University, has been wrestling with a very different type of antenna woven from threads and for use in ‘smart fabric’ devices.

“The e-threads we’re working with are bundles of twisted polymer filaments to provide strength, each with a metal-based coating to conduct electricity,” Asimina explains. “The polymer core of each filament is typically made out of Kevlar or Zylon, while the surrounding coating is silver. Tens or even hundreds of these filaments are then twisted together to form a single e-thread that’s usually less than half a millimetre across.

“The embroidered antennas are lightweight and just as good as their rigid copper counterparts, and can be as intricate as state-of-the-art printed circuit boards. Our e-thread antennas can even be combined with regular threads in more complex designs, like integrating antennas into corporate logos or other designs. We’ve been able to embroider antennas on fabrics as thin as organza and as thick as Kevlar. Once embroidered, the wires can be connected to sensors and batteries by traditional soldering or flexible interconnections that plug components together.”

The IEEE Spectrum has published a webcast on real-time direction finding and spectrum monitoring using software-defined radios, with a particular focus on applicability to the military.

Presented by National Instruments, the webcast describes commercial off-the-shelf (COTS) SDR products and how they enable direction finding and spectrum monitoring in addition to their use as functional radio transceivers for a given signal. “SDRs with user programmable FPGAs [field programmable gate arrays, as found on the LimeSDR family] are uniquely positioned to keep pace with the rapidly changing ecosystem of algorithms and technologies to effectively carry out SIGINT [signal intelligence], EW [electronic warfare] and multi-mission operations.”

Wired, by contrast, has a less militaristic take on direction finding with a report on the sport of radiosonde hunting.

“The white plastic boxes contain instruments to measure things like wind, temperature and humidity; meteorologists send them skywards on balloons, and they transmit data back over radio waves. But somewhere around 100,000 feet, the balloons burst, and the radiosondes parachute back to earth,” Wired’s Laura Mallonee explains. “An antenna and radio receiver tuned to the probe’s frequency lets them listen to its blips and beeps, which they decode with the computer program SondeMonitor.

“Ultimately, someone like Roland [F5ZV, an interview subject for the piece] is able to track it to a precise location … like the kitchen table of one perplexed couple who discovered it in their garden. ‘They couldn’t understand how I found it with my antenna,’ Roland says.”

Linköping University researcher Emil Björnson is turning the traditional thinking surrounding massive multiple-input multiple output (MIMO) antenna arrays on its head with the claim that there is no theoretical upper limit to their capacity.

“We can show that massive MIMO has unlimited capacity, both mathematically and with the aid of simulations,” Emil claims of his research on the subject, blaming the previous conclusion that massive MIMO has an upper capacity limit due to pilot contamination on “the result of us using a model that was far too focused on research tractability and a method that was too simple.

“The consequence is that we can continue to deploy increasing numbers of antennas, as people consume ever increasing amounts of wireless data, and in this way satisfy the demand,” Emil claims, with his team’s research paper available via arXiv (PDF warning) for those who want to delve into the mathematics behind the claim.

“Over the course of a few early morning sessions I came up with a real time NF [noise figure] measurement system, and wrinkled several bugs out of it. I also purchased a few Airspy SDRs, and managed to measure NF on them as well as the HackRF,” Dave explains of his project.

“It’s a GNU Octave script called nf_from_stdio.m that accepts a sample stream from stdio. It assumes the signal contains a sine wave test tone from a calibrated signal generator, and noise from the receiver under test. By sampling the test tone it can establish the gain of the receiver, and by sampling the noise spectrum an estimate of the noise power.”

Using this technique, Dave was able to track and eliminate several sources of noise – including the surprise discovery that the noise figure for an Airspy Mini SDR was 1dB worse when connected to his laptop’s front-left USB pert than the rear-left USB port.

Radio amateurs with a penchant for the designs of Juha Niinikoski and Matti Hohtola – jointly known as Juma – will be pleased to hear that the pair have released PCB design files for their end-of-life radio kits.

While not truly an ‘open hardware’ release – the files are licensed for use as club projects and personal use only – the Gerber files released by Juma allow for the production of since-discontinued PCBs at any commercial facility or even, given the relative simplicity of the single- and double-layer designs, at home using any one of a range of hobbyist PCB production techniques.

Circuits released by Juma so far include the RX1, TX1, and TRX1.

RTL-SDR has written of a project to receive and decode signals from the Meteor-M2 Russian weather satellite directly on a Raspberry Pi single-board computer.

In a translation of an originally Russian article on the project, RTL-SDR describes the work of radio enthusiast Andrey to port GNU Radio blocks to Java in order to run them on any platform without modification or recompilation. “Andrey explains his motivation for writing the software which was that the Windows work flow with SDR# and LRPTofflineDecoder is quite convoluted,” RTL-SDR continues, “and cannot be run headless on a Raspberry Pi.”

Andrey’s code is published on his GitHub repository under the Apache Licence v2.0, with blocks available for the Meteor-M N2 and AAUSAT-4 satellites.

Finally, Myriad-RF will once again be participating in Google Summer of Code as a mentoring organisation with the FOSSi Foundation.

Two LimeSDR-based project ideas have been published: Integrate a RISC-V Core and Switch to a FuseSoC-based Development Flow. Other proposals are welcome, however, these should involve the FPGA or an element of digital design.

For more details see the blog post and any questions can be directed to either the discussion forum thread or LibreCores Gitter.