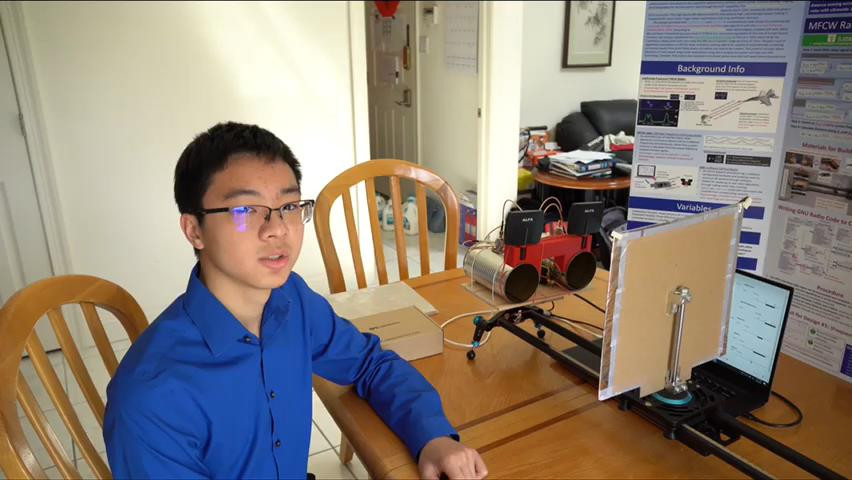 “This project achieved both high accuracy and low cost in a narrowband RADAR design by combining the unpopular Multiple Frequency Continuous Wave (MFCW) RADAR algorithm with the low-cost Software Defined Radio (SDR) on the GNU Radio platform,” Cai explains in his paper’s abstract. “According to traditional Pulse or FMCW RADAR technologies, a typical SDR with 4MHz BW will have a theoretical accuracy limit of 3750cm (i.e. inaccuracy equivalent to the size of a large house). However, this project established the first SDR-based MFCW RADAR in the 2.4-2.5GHz band using two Continuous Waves (CW) with only a few kHz BW and a superior range accuracy of 15cm.

“Despite a lack of applicable publications on MFCW RADAR, a distance sensing algorithm capable of automatically correcting erroneous results from direct delta phase calculation was able to be created. This proof of concept opens the doors to many short-range RADAR applications using the emerging low power and low cost SDR technology.”

The full paper is available on the OpenConf.org website now.

Pseudonymous security researcher Aaron “Cemaxecuter” has published another update to his DragonOS SDR-focused operating system, along with a video demonstrating how to use it and a LimeSDR Mini to set up a home-brew GSM cellular base station.

“How to setup a GSM base station using DragonOS Focal PublicR1 (available once I get it uploaded) and a LimeSDR Mini,” Aaron writes in the description to the supporting video. “Everything is pre-installed and configured to test at least SMS message between phones so long as you have SIM cards and have updated the HLR [Home Location Register]. This is probably the lowest cost SDR that I know of that’ll work with Osmo-BTS,” he adds of the LimeSDR Mini itself.

A second video demonstrates how to expand the LimeSDR Mini-powered base station to support voice calls, while a third shows off FALCON – the Fast Analysis of LTE Control Chanels tool collection, designed for real-time analysis of radio resources in LTE and LTE-A networks.

All the videos, and others covering DragonOS, are available on the Cemaxecuter YouTube channel now; the latest DragonOS release can be found on SourceForge.

For those who prefer to read, rather than watch, their tutorials, “Dr. Signal” has published a step-by-step guide to setting up a LimeSDR with GNU Radio and gr-gsm in Canonical’s Ubuntu 20.04.

“Gr-gsm is developed by ‘Piotr Krysik’ back in 2014 or so,” the Doctor writes. “He and a few others tried how to sniff GSM packets and break the Algos, retrieve the SMS or voice data as part of their security research after those vulnerabilities in GSM. This gr-gsm tool is so famous that it made other domain hackers / people search about what is SDR.”

The Doctor’s post walks through the installation and use of gr-gsm with a LimeSDR and GNU Radio; for those just starting out, a second tutorial walks through setting up the LimeSDR and a supporting software stack – including GNU Radio, gr-limesdr, LimeSuite, and GQRX, as well as how to use configure the USRP Hardware Driver (UHD) to use the LimeSDR hardware as a source.

The specific gr-gsm and general setup guides are both available on Dr. Signal’s Medium page now.

Single-board computer specialist LattePanda, meanwhile, has highlighted the LimeSDR Mini as an ideal companion to its latest LattePanda Delta SBC.

“[The LattePanda Delta] has only gained connectivity functions since its infancy via the use of LimeSDR Mini technology,” the company explains, “which allows the SBC to transmit and receive data through a variety of different types of wireless communication standards, including, but not limited to, UMTS, LTE, GSM, LoRa, Bluetooth, Zigbee, RFID, and Digital [Video] Broadcasting.

“Whether you would like to convert your LattePanda SBC to a ham radio or add LTE connectivity to your LattePanda project, all of this is achievable with the small LimeSDR Mini. This USB dongle can help you control these different types of waves transmitted to and received by your LattePanda, enabling makers to expand beyond high-end Bluetooth and Wi-Fi connectivity. This means that any avid amateur radio fans can now build their radios using the LattePanda SBC, suitable touch screen, and LimeSDR Mini with ease, and anyone who wishes that their project could double as an LTE antenna providing smartphones and personal devices with LTE service can consider using this technology to improve upon their already exceptional project.”

To prove its point, LattePanda has highlighted two community projects: one turns a LattePanda with LimeSDR and SDR Angel into a ham radio rig, while the other adds LTE cellular connectivity.

The full blog post, which also highlights Intel’s Movidius neural network accelerator technology, can be found on the LattePanda website.

Wired’s Jaime Stathis has come out in heavy support of radio hams, proclaiming that “there’s no better time to be an amateur radio geek” and showcasing how hams are of service in emergency situations.

“Although I spent most of my life thinking amateur radio was for geeks and grandparents, I now sit with [my boyfriend] Martin for twice-weekly check-ins with the local amateur radio club,” Jaime writes. “It’s a way for ham radio operators to not only touch base with each other, but also to test their equipment. Amateur radio operators not only help themselves, but in emergencies they deploy to assist organizations like the Federal Emergency Management Agency (FEMA), Red Cross, and local public safety offices communicate and coordinate with the public, and with each other.

The full article is available on the Wired website.

The US Federal Communication Commission is taking an active interest in the concept of open radio access networks (open RANs) for 5G cellular infrastructure, with chair Ajit Pai in seeming full support of the concept.

According to coverage of a forum on open RAN technologies published by Broadband Breakfast, Ajit proclaimed that “open radio access networks can transform network architecture, costs, and security,” while claiming that open RAN systems will contribute to keeping the United States on top of development and distribution of 5G cellular.

Other panellists speaking during the event praised the ability of open RANs to disaggregate previously-monolithic and vendor-locked networks, to improve network interoperability between wired and wireless infrastructure, improve network slicing, and even to contribute to closing the “digital divide” – the gap between the haves and have-nots of the networked world.

The full write-up can be found on Broadband Breakfast.

The International Space Station (ISS) is now home to an active and amateur-accessible FM repeater, as the first part of the ARISS Next Generation radio system has been installed in the Columbus module.

“The ARISS team is pleased to announce that set up and installation of the first element of our next generation radio system was completed and amateur radio operations with it are now underway,” ARISS announced to followers earlier this mopnth. “This first element, dubbed the InterOperable Radio System (IORS), was installed in the International Space Station Columbus module. The IORS replaces the Ericsson radio system and packet module that were originally certified for spaceflight on July 26, 2000.

“Initial operation of the new radio system is in FM cross band repeater mode using an uplink frequency of 145.99 MHz with an access tone of 67 Hz and a downlink frequency of 437.800 MHz. System activation was first observed at 01:02 UTC on September 2. Special operations will continue to be announced.

ARISS has confirmed that a second IORS, to be installed in the Russian module, is to be launched in the near future, to add dual simultaneous operation capability. More information is available on the ARISS website.

The Search for Extra-terrestrial Intelligence (SETI) Institute and GNU Radio have partnered on signal procesing work at the Allen Telescope Array (ATA) and the Hat Creek Radio Observatory (HCRO) – an extension of a partnership which began in 2019 and resulted in the GNU Radio module gr-ata.

“I first started using GNU Radio as a teaching tool,” Steve Croft, community partnership scientist on the SETI Institute SETI team, recalls. “With $25 worth of hardware and some free software, someone with a little technical know-how can begin to explore the radio spectrum – picking up and visualising FM radio stations, decoding transmissions from airplane transponders, or detecting the signal their car key sends to unlock their vehicle. But I soon discovered there was a whole community of people developing and building cutting-edge devices with this technology, and they welcomed me into their collaboration.”

“This partnership will bring important and substantial benefits to both the GNU Radio project and larger community, and is also a reflection of GNU Radio’s success, impact, and importance in the field of RF and radio,” adds GNU Radio president Ben Hilburn. “Some of the most foundational goals of GNU Radio have always been to make the fields of RF and wireless accessible and fundamentally empower people to explore and build, through free and open source software, for the benefit of everyone: academics, educators, researchers, hobbyists, and government. In the SETI Institute, we’ve found a partnership that will lift both organizations up together towards our common goals.”

More details on the project, which will result in the development of a common infrastructure for software at the Allen Telescope Array, can be found on the SETI Insitute website.

“[The] noise only appeared when an Ethernet cable was plugged in to the Pi,” the poster explains. “Eventually I made a new Ethernet cable, same length as the first one, but with 3 turns around a ferrite ring. I couldn’t really believe that one simple ferrite bead could make such a drastic improvement, so I made yet another cable, same length but no ferrite, and plugging that in reduced the noise even more.

“Also, with the SDR connected to the server, switching the Pi on with the new ethernet cable no longer made any visible noise on the FFT. And somehow, the high ground resistance I saw also disappeared. So, the problem was the cable? I don’t get it. It’s a pre-made Cat5 cable, just 2m long, it works perfectly fine even at gigabit speeds, yet somehow it just vomits noise all over. I stripped the whole thing and it looks properly made, each pair being tightly and evenly twisted. I have no idea how one cable could make such a mess.”