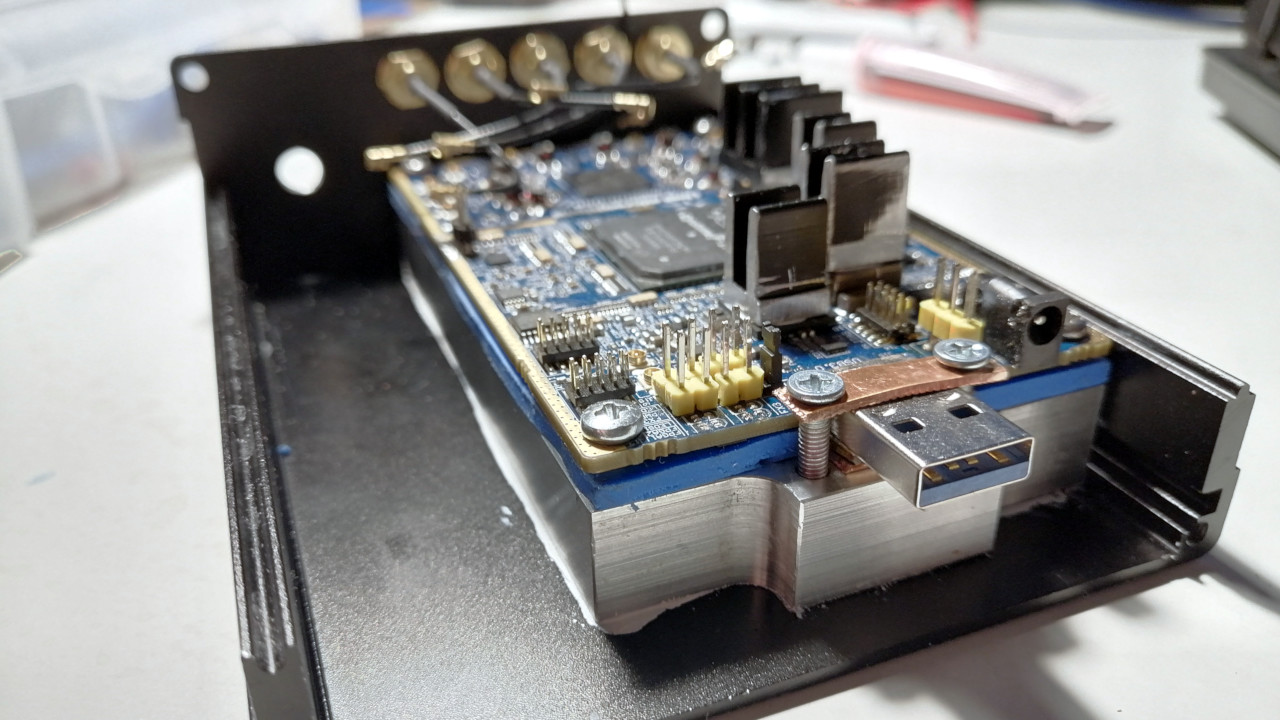 Using the LimeSDR Mini, housed in a protective casing and connected to an off-the-shelf laptop running software based on the SoapySDR application programming interface (API), the system is designed to wrest control of an unauthorised drone using a timing attack – triggered on an impressively sci-fi graphical user interface.

“The software scans the environment and notifies if the drone communication between transmitter and receiver is captured,” Ugnius explains in the video. “The drone was identified. The software initiates a drone takeover operation. The drone’s control system is taken over. We can fully control the drone with virtual joysticks in the software’s GUI window.”

Hyperion Technologies has launched a LiFi development kit based around the LimeSDR USB, as a means of making work with its light-based wireless communication system as simple as possible.

According to specifications released by the company, its LiFi transmitter and receiver front-end modules offer 20MHz of electrical bandwidth, a 170 degree field-of-view with line-of-sight and non-line-of-sight operation modes, and a 20m rante based on the built-in 5000K 186-lumen LED light source.

The LiFi transmitter and receiver front-end modules are connected to a modified LimeSDR USB via SMA, with the company providing sample source code for GNU Radio to get users up and running as soon as possible.

More information on the bundle, which includes two front-end modules and two modified LimeSDR USBs, can be found on the Hyperion website.

Community member Orson Maxwell has written a forum post detailing a custom “cheap-o” enclosure for the LimeSDR USB, which includes a chunky block of custom-milled aluminium as a heatspreader.

“I passed on the commercially available enclosures for LimeSDR USB-A because I had a specific device in mind,” Orson writes, “and I needed a bit more breathing room inside to include an HF converter directly into the box so it doesn’t dangle on the cables outside.”

The project started with an off-the-shelf low-cost aluminium enclosure, while a hefty “aluminium brick” heatspreader serves the dual purpose of cooling the LimeSDR USB and relieving strain on the USB connector. The board is electrically insulated and thermally bonded to the brick with a 2mm thermal pad, and markings were engraved for all connectors using a CNC machine.

“Then I thought that all those connectors and stuff needs protection,” Orson notes, “so I designed small U-shaped railings to protect them, and went off to a friend with a 3D printer. I also had him make a small box-shaped cap that would go onto the USB connector and cover up the gaps around it so you can fit the cable, but the air does not get sucked in through them.”

The finished case, including additional heatsinks and a small fan for active cooling, can be seen on the MyriadRF Discourse forum; Orson has also offered to share the CAD files for anyone wanting to replicate his design.

Anyone finding that their otherwise-functional LimeSDR Mini boards are failing loopback tests in Lime Suite are advised to keep an eye out for an updated software release, following the discovery of a bug that causes intermittent test failures.

“We had a number of reports of LimeSDR Mini boards intermittently failing loopback tests that are run by the LimeQuickTest utility,” Andrew Back explains. “Upon investigation, it turned out that the VCO bias current for LimeSDR Mini was being set lower than it was for other boards, which was resulting in this error and possibly other issues.”

The bug has now been fixed, though this is not quite yet reflected in the pre-built downloads. Those affected by the bug have the choice of waiting a few days for the new release, scheduled for the end of July, or to build Lime Suite from source using the “master” branch to receive the bug fix immediately.

More information is available on the forum thread.

Developer Alexandre Rouma has announced work on a cross-platform software defined radio package designed as an alternative to the popular SDR# – dubbed SDR++ – and has released the first official alpha.

“A few weeks ago I posted about my SDR software project. For those who didn’t see the post, it’s an open source and cross platform SDR program that looks and feels close to SDR#,” Alexandre writes on Reddit. “This alpha version is Windows only due to the code being kinda wonky on Linux. (A Linux release is coming soon though.) I would love for you guys to give me feedback. But please keep in mind that since it’s an alpha version, it’s quite unstable and misses a lot of features.”

While the alpha release is officially Windows-only the target is to have the software be cross-platform – and the most recent source revision builds correctly and runs on Linux, but with no word yet on macOS support.

More details are available in the Reddit thread, while the alpha releases and source code can be found on GitHub under the GNU General Public Licence v3.0.

The Pothos SDR framework’s C++ library has been updated to release 0.7.0, which adds new PothosUtil features and changes a selection of application programming interface (API) calls – including fixes for buffer length and data type reporting.

Other changes include the moving of probe handlers into worker actor as a fix for “Python overload,” and fixes for the circular buffer alias calculation.

The new release is available from the Pothosware GitHub repository now, under the Boost Software Licence v1.0.

The New England Workshop on Software Defined Radio (NEWSDR) 2020 conference has been shifted to a virtual-only event, with registrations closing on the 9th of August.

“The 2020 New England Workshop on Software-Defined Radio (NEWSDR’20) is the tenth installment of an annual workshop series organised by the Boston SDR User Group (SDR-Boston),” those coordinating the event write. “Given the continued global health emergency of the COVID-19 pandemic, this year’s event will be safely hosted online using a variety of Internet technologies such as Zoom, YouTube Live, and Slack.

“Although this will be a virtual event, the NEWSDR 2020 organizers are committed to achieving the primary goal of this workshop by providing a forum that enables individuals working on SDR-related projects within the New England area to get together, collaborate, and introduce SDR concepts to those interested in furthering their knowledge of SDR capabilities and available resources. NEWSDR 2020 welcomes both experienced SDR enthusiasts as well as individuals who are interested in getting started with SDR.”

More information, and a link to register to attend in silico, can be found on the official website.

Yian IT is preparing to launch a crowdfunding campaign for its RadioSlate, a Windows- or Linux-based tablet computer capable of housing an internal LimeSDR Mini on a custom-built bracket.

“RadioSlate is a sturdy aluminum tablet with an industry-favourite software-defined radio (SDR) board,” the company explains. “Whether you’re a Ham radio operator, a network engineer, a mobile base station designer, a security auditor, or some other variety of SDR enthusiast, RadioSlate lets you do your thing, even if that thing requires you to go outside and walk around, get unusually close to transmitters and receivers, keep one hand free for other tasks, or manage all of the above without drawing undue attention to yourself. Explore the spectrum, while on the go, without having to drag along your laptop, an SDR board, and cables.”

The tablet is based on a 1,024×600 resolution touch-screen display in an aluminium housing with an Intel M3 8100Y processor, 8GB of RAM, 64GB of storage, and an Arduino Leonardo microcontroller. In addition to wired Ethernet and 802.11ac and Bluetooth 4.2 radios, the tablet includes an internal mounting bracket compatible with the LimeSDR Mini.

For more details, and to register for an alert when the campaign goes live, visit the Crowd Supply campaign page.

Radio amateur Manuel Lausmann has come up with an interesting technique for quickly shifting frequency in SDR# – by encoding them into barcodes and reading them with a scanner.

Using a cheap USB barcode scanner and an online barcode generator which runs in the browser, Manuel encoded his most commonly-used frequencies into simple 1D barcodes. Swiping the scanner over each sets SDR# to that frequency – quickly and without the errors that could be introduced by untrained users adjusting the frequency manually.

Manuel’s video, with links to the generator and scanner used, is available on YouTube; the narration is in German, with computer-generated English subtitles.

Hackaday has brought to our attention a project by pseudonymous maker “The Amateur Engineer” demonstrating an easy approach to fix a broken telescoping antenna.

“Recently, I passed one of my Kyosho Mini-Z RC Monster Trucks (AM 27 MHz version) on to my son, who recently turned 7. He enjoys playing with it, but like most young kids, he does not really know the proper care of the truck,” TAE explains. “As he was keeping the antenna, he pushed it in with his palm instead of pulling the segments in from the base (my fault for not teaching him that). The result was a broken antenna, near the base of the second top-most segment.”

TAE’s approach to fixing it involved using a screwdriver to prise open the third segment, remove the upper two, retrieve the broken segment plus the movement-limiting copper plates, and drilling holes in the now-shortened upper segment before reassembling.

The full guide is available on The Amateur Engineer website.

Finally, Hackaday has also covered an interesting drone project dubbed the Sky Anchor – which aims to put antennas up without the need for a mast.

“Sky Anchor […] allows myself and anyone else who duplicates this project to have a rapid deployment sky born communications for both Software Defined Radio, wide area Wi-Fi (below the drone) and the ability to target a robot or AP off in the distance and lock onto that direction and angle and adjust if the AP is moving,” creator Josh Starnes explains. “This is where the smart part of the drone is important using machine vision and Software defines radio to track projects or locations that need a solid internet connection to transfer data.”

Powered by a Raspberry Pi 4 single-board computer, the Sky Anchor system includes a ground-facing camera linked to a machine vision system to compensate for GPS drift, downward-facing LIDAR, and an RGB light – both for illumination and to make the drone more easily targeted for line-of-site communication at night.

The full project is detailed on Hackaday.io.