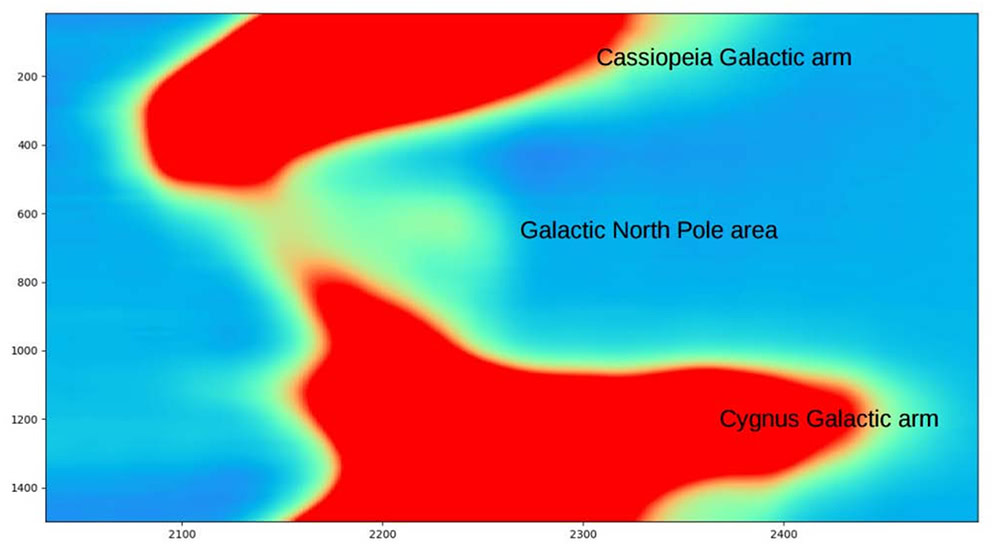 David Lonard has posted in the forum to share his results with using the LimeSDR for stargazing via astronomical interferometry, using the board’s 2×2 multiple-input multiple-output (MIMO) functionality.

“I’ve been working on a 1420 MHz radio astronomy interferometer for a while now and using the LimeSDR that I just received I’m getting some nice results,” David explained in his posting. “Basically, the 2×2 MIMO capability of the LimeSDR has made it easy to get two antennas to function together as a coherent receiver pair. I’m hoping that I can get two LimeSDR units to work together to get 4×4 MIMO, and I am also very interested in the 4×4 MIMO PCIe based unit that is in the works.”

A full record of David’s experiments can be found in his Google Group for the project. The LimeSDR-specific results are available as a PDF in this post.

If you’ve ever wondered about the basics of how a software defined radio works, you could do a lot worse than following Oscar Steila’s write-up on his Breadboard RF103 SDR build.

“These are exciting times for homemade construction of Software Designed Radio (SDR),” Oscar wrote of his project, brought to our attention by a post on Hackaday. “Our laptops and desktops have more computing power. Better compilers simplify multi-thread programming. Computer interfaces run at a higher throughput rate.” It’s these features of modern computers that allowed Oscar to simplify his build: the BBRF103 avoids the need for on-board processing by spitting its raw data to a host system over a USB 3.0 connection and relying on the PC to process it.

Oscar’s design is based around the ARM-based Cypress FX3 Super Speed Explorer Kit development board, an LTC2217 analogue-to-digital converter (ADC), an R820T2 tuner, and a Si5351A clock generator. As well as the write-up on his blog, Oscar has published schematics and source code for the project on his GitHub repository under an unspecified licence.

Thomas Cholakov has forever dispelled the myth that you need specialist antennas to pick up satellite communications, publishing a video demonstrating how to use old an old ‘bunny ears’ TV antenna to pick up signals from the NOAA 19 weather satellite.

While originally designed to pick up terrestrial TV signals, the ‘bunny ears’ dipole design comes with feature Thomas used to alter its reception properties: it is telescopic, allowing its length to be adjusted to resonate at varying frequencies. By setting the antenna to around 20 inches and aligning it north-to-south, Thomas was able to pick up clear signals from the National Oceanic and Atmospheric Administration (NOAA) satellite – and even found it rejected strong vertically-polarised stations which may have otherwise interfered with the signal.

RTL-SDR has published a brief write-up on Thomas’ video, and includes the promise of a soon-to-launch ‘bunny ears’ style dipole antenna tailored for SDR use with multiple mounting options and three metres of RG174 co-axial cable. The site states the antenna will be priced at around $10-15 including shipping from China, making it an affordable alternative to scouring through parts bins or auction websites then adding the mounts and cable yourself.

The SatNOGS do-it-yourself ground-station project has its own antenna offering for improving reception of satellite signals in the form of a no-rotator design which avoids the complexity of moving parts.

Founded with the aim of creation an open-source network of satellite ground stations, the SatNOGS project is a treasure trove of advice, tools, and designs for satellite communication reception. While many of the project’s previous antenna designs have relied on rotators to maintain contact with the moving satellites, the group’s recently-published no-rotator design avoids moving parts – greatly simplifying construction, installation, and maintenance.

Images of the ground station have been published to the project’s wiki, though thus far although a bill of materials is included the assembly instructions have yet to be written.

Researchers at Fox-IT and Riscure have again demonstrated the value of SDR technology to the security industry, publishing a white paper on TEMPEST attacks capable of recovering encryption keys using just €200 in equipment.

Also known as van Eck phreaking, TEMPEST involves capturing electromagnetic and radiofrequency signals from target equipment and using them to deduce the state of the machine. In the white paper, Fox-IT and Riscure’s researchers describe using TEMPEST techniques in a side-channel attack against the Advanced Encryption Standard (AES) to capture private keys from distances of up to a metre – though limited to 30cm under ‘realistic conduitions’ – using three software-defined radios from a top-end lab-grade 500MHz model to the ultra-low-cost RTL-SDR.

“The low bandwidth requirements have allowed us to perform the attack with surprisingly cheap equipment (€20 radio, modest amplifiers and filters) at significant distances,” the team concluded. “In practice this setup is well suited to attacking network encryption appliances. Many of these targets perform bulk encryption (possibly with attacker controlled data) and the ciphertext is often easily captured from elsewhere in the network.”

Canonical’s Maarten Ectors is once again bullish on the future of open-source radio technologies, predicting a day when the cost of software-defined radio technologies has been reduced “to as close to zero as possible.”

Following Maarten’s interview detailed in a March issue of OTA, developer site TheServerSide has published a further interview in which Maarten predicts the lowest possible entry cost for future SDR projects. “Step 1 was about building an ecosystem of developers,” Maarten explained. “Step 2 is about giving the developers a market to sell their apps. Step 3 will be about reducing the cost of an SDR to as close to zero as possible.

“This will be done by putting the SDR on a chip and even in the future include this inside other chips. With this approach, we will go from a $285-$500 SDR to a below $10 SDR which will open the possibilities to have an SDR in any wireless device, including smartphones. The future will likely be about each mobile app having the possibility to use their own protocol by negotiating this with the software defined radio in the base station.” Maarten predicted. “Wireless Innovation at Internet speeds, driven by GitHub and App Stores.”

The full interview is available on TheServerSide now.

Finally, if you’ve ever wondered what it looks like to print a case for a LimeSDR the 3DPrintPig Channel has your answer – albeit distilled into an 18-second timelapse which makes the process seem an awful lot quicker than it really is!

Various LimeSDR case designs are publicly published via services like Thingiverse, and most are suitable for printing on even the cheapest of consumer-grade 3D printers. For those who haven’t taken the plunge, commercial 3D printing services will accept the files and send you the result by post – or local hackspace, makespace, or other collaborative working environments typically have 3D printers and other small-scale production hardware available for members’ use.

If you’ve ever visited the Myriad-RF forums with a technical query, the chances are high you’ve run into Lime Microsystems engineer Zydrunas “Zack” Tamosevicius. “I was invited to Lime to work as a digital chip designer almost 11 years ago,” Zack recalls. “Just a few months after Lime was established. There is no typical day at my job – it is dynamic,” he smiles. “Meetings, support, driving a team, design… A lot of things happen at my job during the day, and it is always different.”

Zack remembers his first introduction to software defined radio well. “The nature of my job gave me no option,” he explains. “We create FPRF [Field Programmable Radio Frequency] transceivers, as you know, and this is just a right and most suitable vehicle for SDR. Hence we started to create boards to be able to get data between our transceiver and a PC. I’ve lead the team for the LimeSDR project both for hardware and software,” he adds – demonstrating that when you get an answer to your LimeSDR query from Zack, you can rest assured he knows what he’s talking about.

“It’s a zoo, actually,” Zack describes the software and hardware environment he uses on a daily basis. “The hardware our team and I use are usually the boards from LimeSDR family. Software usually is LimeSuite – our software for LimeSDR boards – and a bunch of other programs from our partners or open-source projects we are trying to make work together with our software and hardware.”

That open-source nature, being able to plug things together to experiment and modify, is a key feature of what keeps Zack enthused about SDR technology. “Freedom,” he responds when asked of the root of his attraction to SDR. “You do not have to work for a large corporation to get access to wireless interfaces and technologies of all kinds. You just keep your hardware the same while changing the software. As a result you may execute a LTE base station right now and after a minute switch to Wi-Fi, GSM, BT, you name it.”

Not that there isn’t room for improvement, Zack will readily confess. “There are a lot of things which needs to be improved,” he admits. “The interface between different software modules, for instance. It would be very nice to have a united protocol for this kind of software. There is the same issue for interfacing SDR hardware. But I believe that community will standardise these things, and life will be easier.”

Asked to name his proudest achievement, Zack is humble: “It is the achievement of our team with the LimeSDR-USB campaign. I am very happy to see how many people supported our effort to deliver this product to the community. Moreover, it is very exciting to see a working LTE basestation, for instance, on the platform based on the chip which was designed by your team.”

“It always happens,” Zack replies when asked to recount some of his more memorable ‘learning experiences.’ “Usually it’s kind of like ‘why this stupid device doesn’t work when yesterday it was working like a charm,’ and you are killing yourself trying to figure out what is wrong – and it appears that you have to turn on the device to fix it,” he laughs. “There was a funny thing with an electrolytic capacitor: It just exploded for some reason. I felt something flying just above my head and the office was full of the dust. It happens when you have electrolytic capacitor soldered the wrong way around!”

Zack’s advice for those just starting out with SDR is simple: “Be curious and do not be afraid! There is a big community who will help you during this journey. And do not hesitate to ask for help if you feel stuck. Most importantly – start with the LimeSDR,” he laughs.