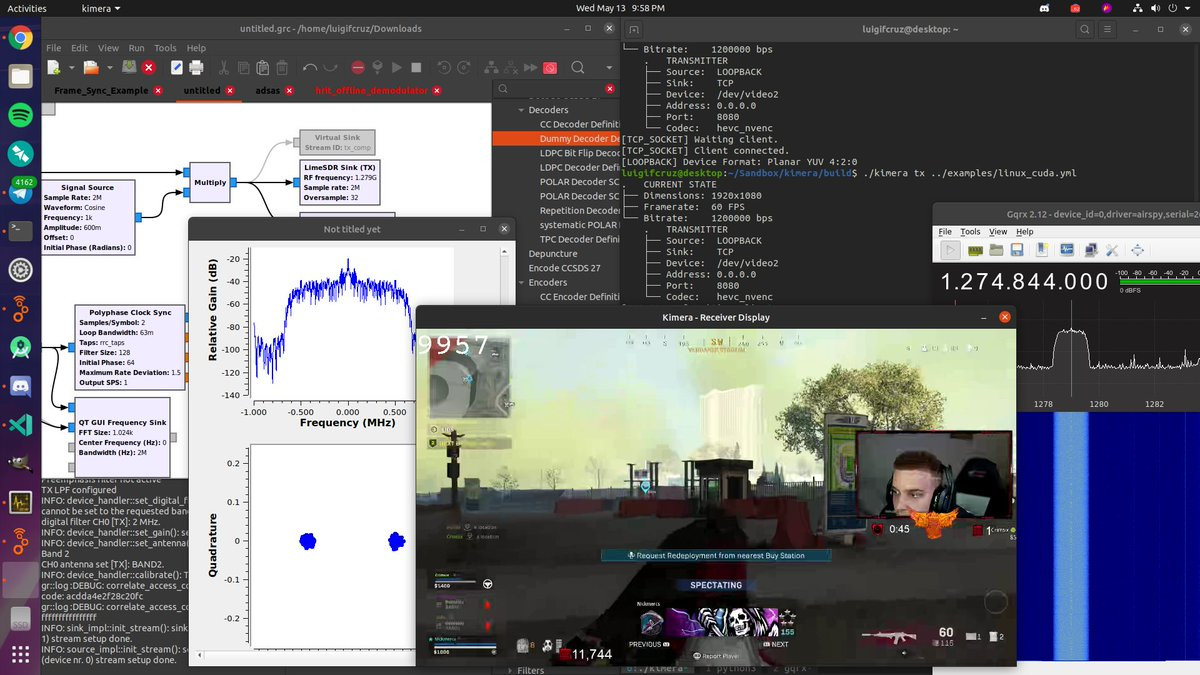 Community member Luigi Cruz has published a tool which is capable of encoding any video source, complete with hardware acceleration, and transmitting it over the airwaves using a LimeSDR.

“Kimera can capture any camera connected to your computer, hardware encode it with any codec available (e.g. HEVC, AVC, AV1), and transmit over TCP, UNIX Socket, or this GNU Radio Transport Layer,” Luigi writes of his latest software release. “On the receiver, it will decode and emulate a native camera.”

Described as a work-in-progress, Luigi has demonstrated Kimera transmitting a live video stream from Twitch on a host system to a receiving system using a LimeSDR and GNU Radio. The neatest trick: The received stream appears as a video device, allowing any software which can accept a webcam as input to receive the stream without modification.

More details are available on Luigi’s Twitter thread, while the Kimera source code is available on GitHub under the GNU General Public Licence 2.0.

Pseudonymous engineer “Einthecorgi” has shown off a custom-built case for a LimeSDR USB, designed to fit in a rack and provide access to all RF channels via external antenna connections.

“Made a rack mount case for a #LimeSDR,” Ein writes of the project, which is still a work-in-progress for integrating LimeSDR into 1U of a standard 19″ communications rack. “Still have to add power and Ethernet.

“This will be a 700mhz gateway device. Next I will build a filter amplifier and switch unit. All RF channels are available but I will only be using 2.”

An image of the housing is available on Ein’s Twitter feed.

Radio amateur Albert van Deursen – callsign PA5OXW – has cause for celebration this month, after successfully making his first-ever QSO to QO-100 using a LimeSDR.

“Today became a special day for me,” Albert writes on Twitter. “Made my very first Satellite QSO {EVER} with Vlad R9LR using QO-100.

The call for participation in the GNU Radio Conference 2020 is now open – and, as is to be expected given world events of late, the 10th GRCon is going to be entirely virtual.

“GNU Radio Conference (GRCon) is the annual conference for the GNU Radio project & community, and has established itself as one of the premier industry events for Software Radio,” the event’s organisers write. “It is a week-long conference that includes high-quality technical content and valuable networking opportunities. GRCon is a venue that highlights design, implementation, and theory that has been practically applied in a useful way.

Full details of GRCon 2020 are available on the GNU Radio website, along with forms to fill in to register as a guest or to answer the call for participation.

“The D-GSM implementation is now complete and merged to the OsmoHLR master branch. It is hence featured in OsmoHLR’s Nightly Builds, and will be included in the next OsmoHLR release (upcoming OsmoHLR v1.21),” writes Osmocom’s Neels Hofmeyer.

“Distributed GSM is a unique feature set tailored to non-centralized collaboration of communal mobile network sites. Compared to traditional (centralised, highly available) core networks, the most novel aspects of D-GSM are that it allows mobile network sites to roam its subscribers and connect calls without any central entity, and that it minimises disruption that may be caused by unstable links between sites.”

More information is available in Neels’ blog post, along with a link to the documentation for making use of the feature.

The BBC has written an article on how amateur radio is bringing people together during lockdowns against the spread of the SARS-CoV-2 virus, formerly known as the novel coronavirus.

“Amateur radio use in the UK has seen a ‘significant’ rise during the coronavirus lockdown as people seek new ways of staying connected,” writes the BBC’s Vanessa Pearce. “The national body that represents users – the Radio Society of Great Britain (RSGB) – has said many people who formerly enjoyed the hobby are also returning to it.

“Steve Thomas, RSGB general manager, says the organisation has experienced a threefold increase in the number of people asking to sit licensing exams since social distancing rules came into place. There are currently about 75,000 licensed users in the UK.”

The full article, including comments from radio amateurs old and new who have discovered or rediscovered the hobby during lockdown, is available on the BBC News website.

VKSDR author Sam has published a guide to using his xrit-rx utility to receive and decode images from the geostationary GEO-KOMPSAT-2A weather satellite using an SDR and a Linux host.

“GEO-KOMPSAT-2A (GK-2A) is a geostationary weather satellite operated by the National Meteorological Satellite Center of the Korea Meteorological Administration,” Sam writes. “It is positioned over the equator at 128.2°E longitude which is visible from Australia, New Zealand, Southeast Asia, Japan, Korea, China, India and Eastern Russia.

“A GK-2A LRIT receiver is made up of two open-source applications: goesrecv and xrit-rx. Demodulation and decoding of the LRIT downlink is handled by goesrecv, while xrit-rx takes care of demultiplexing and decrypting the packets from goesrecv into image files.”

Sam’s full guide is available on the VKSDR website.

RTL-SDR has brought our attention to gr-tempest, an implementation of Van Eck phreaking – TEMPEST – for GNU Radio.

“TEMPEST (or Van Eck Phreaking) is a technique to eavesdrop video monitors by receiving the electromagnetic signal emitted by the VGA/HDMI cable and connectors (although other targets are possible, such as keyboards, for which the same term is generally used),” writes author Federico La Rocca. “This is basically a re-implementation of Martin Marinov’s excelent TempestSDR in GNU Radio (see https://github.com/martinmarinov/TempestSDR).

“The reason is that I felt it may be easier to maintain and extend. Note however that the basic ideas were imitated, but the synchronisation algorithms are different, and some functionalities (particularly in the GUI) are missing.”

Federico’s software, recently released with GNU Radio 3.8 compatibility, comes with four main examples: One each of manual and automated systems for simulation and actual TEMPEST capture. The source code and instructions for running the software on GNU Radio 3.7 or GNU Radio 3.8 are available on GitHub under the GNU General Public Licence.

GNU Radio project officer Bastian Bloessl has released the source code for a version of GNU Radio capable of running on an unmodified, unrooted Android smartphone or tablet.

“Some months ago, I looked into Tom Rondeau’s work on running GNU Radio on Android,” Bastian writes. “It took me quite some time to understand what was going, but I finally managed to put all pieces together and have GNU Radio running on my phone.

“A state-of-the-art real-time stream-data processing system and a comprehensive library of high-quality DSP blocks on my phone – that’s pretty cool. And once the toolchain is set up, it’s really easy to build SDR apps. I put quite some work into the project, updated everything to the most recent version and added various new features and example applications.”

More on the project, along with a demonstration video, can be found on Bastian’s website; the source code, meanwhile, is available on GitHub.

Reddit user natedn10 has written up how they solved interference in NOAA weather satellite imagery: By installing a bandpass filter.

“I’ve been super frustrated by NOAA images with vertical lines and a complete lack of Meteor images,” natedn10 writes. “Looking at the spectrum in GQRX, I saw the same thing others have reported in this sub – a ‘bouncing’ noise floor and intermittent noise in demodulated audio. I tried a bunch of things that didn’t help, such as removing my NooElec Sawbird+ NOAA and connecting the RTLSDR directly to the feed.

“I made an LC bandpass filter around the 137 MHz satellite band (don’t remember the specifics, just a 3rd or 4th order Butterworth) and put that in front of the Sawbird, and was able to increase the sig gen power about 10 dB before the noise floor out of the sig gens started to get into my measurements, but still no intermod issues. Next test was sensitivity at 137.5 MHz, and my filter didn’t really have any negative effect there despite ~3 dB insertion loss. So I put the setup back together with the filter in front of the Sawbird and got my first rather decent Meteor image in a week.”

Researchers at Duke University have published a paper on a method for passively locating radio wave sources – proving their point by turning an antenna shaped like a smiley face into a “heat map” of radio waves.

“In this paper we achieved spectral images of microwave noise sources themselves, which means we can locate radio and microwave sources, like antennas, while simultaneously characterising what frequencies they are emitting over,” says Aaron Diebold, the electrical and computer engineering research assistant at Duke who led the research. “At optical frequencies, that would be like getting a color image of a hot object like a stove burner. While that is pretty simple optically, it takes different techniques in the radio and microwave regime.”

“Passive imaging occurs in situations where you don’t control the source, like taking a photo using light from the sun or light bulbs,” explains Professor David R. Smith. “At microwave frequencies, there are lots of signals bouncing around constantly. These ambient RF waves could provide enough illumination for a metasurface imager to reconstruct images using the techniques described in this research.”

More information is available on the Duke University website.

Developer Gokberk Yaltirakli has published a tool for encoding, rather than decoding, images into APT signals – the same modulation format used by NOAA weather satellites.

“Apt-encoder reads image files and turns them into sound data modulated as APT signals,” Gokberk writes of the project. “APT is a way to send images as audio, and it is used by NOAA weather satellites. It is a simple format that a lot of people recognize by sound, and decoders for it are easily available. This makes it a good candidate for simple radio faxing.

“The program needs pictures encoded in the PGM format. You can use an image editor, such as GIMP, in order to create these files. The format needed by the program is P2, also known as the ‘Text’ encoding of PGM. The images will need to have a width of 909 pixels, and they can have any height. The program can handle images of different heights. If two images with different heights are encoded, the shorter image will be padded with black pixels.”

The source code for the program is available on GitHub, published under the GNU General Public Licence 3.0.

Finally, the head librarian of the Center for Astrophysics has announced a partnership with the LibreSpace Foundation for the installation of SatNOGS ground stations in libraries – as a means of encouraging education and experimentation in the field of satellite communications.

“We are working with Libre Space Foundation to install SatNOGS stations in public libraries around the world,” Diana Bouquin writes on Twitter of the effort. “Thanks @BMHasdeu @BibliotecadStgo @cambridgepl & Marathon TX for being the first!”

“The John G. Wolbach Library at the Center for Astrophysics (a collaboration between Harvard University and the Smithsonian Institution) has partnered with the Libre Space Foundation to create new infrastructure to support small satellite missions and enable public engagement with space technologies,” the project’s documentation further explains.

“Part of this initiative is LSTN (Library Space Technology Network), a project that offers public library communities the chance to build and engage with space technology. During the pilot phase, five public libraries around the world will build SatNOGS-powered ground stations and provide feedback to the core team.”

More information is available from the LSTN handbook, available on Zenodo under a Creative Commons Attribution-ShareAlike 4.0 International licence.