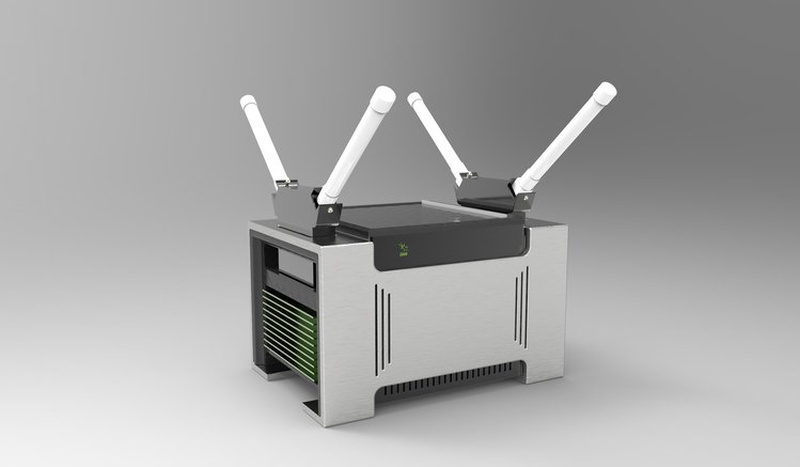 Lime Microsystems and Canonical are putting together the finishing touches to the LimeNET wireless-network-in-a-box crowdfunding campaign with a view to launching a pair of powerful yet compact computers equipped with LimeSDR modules.

Based on hardware specified by Lime Microsystems and running Canonical’s Ubuntu Core GNU/Linux operating system, the LimeNET boxes are designed as one-box solutions for radio basestation work – and while there’s a primary focus on using it as a cellular network node the LimeNET devices can run on any frequencies and protocols supported by the internal LimeSDR, permits and regional laws permitting. Each use will be supported by applications available in self-contained ‘Snaps’ from a centralised app store system.

The campaign looks to raise funds to produce two main devices: the LimeNET Mini, based around the Intel Core i7-7500U low-power dual-core processor with 32GB of memory, 512GB of SSD storage, and a USB-connected LimeSDR built into the compact chassis; and the larger LimeNet, featuring a powerful Intel Core i7-6950X 10-core processor, 64GB of memory, 1TB of SSD storage, and the LimeSDR PCI Express (PCIe) add-in card. More details, plus a registration link to be notified when the campaign goes live, can be found on the Crowd Supply campaign page.

The International Telecommunication Union (ITU) has announced agreement on key performance requirements for fifth-generation (5G) cellular networks, under the IMT-2020 banner, publishing a draft report ahead of approval in November this year.

“The IMT-2020 standard is set to be the global communication network for the coming decades and is on track to be in place by 2020,” François Rancy, ITU Radiocommunication Bureau director, claimed following a meeting in Geneva late last month. “The next step is to agree on what will be the detailed specifications for IMT-2020, a standard that will underpin the next generations of mobile broadband and IoT connectivity.”

While the specification has yet to be finalised, early trials based on IMT-2020 requirements have already begun. Researchers from the Universities of Bristol and Lund, National Instruments (NI) and BT have begun trials of massive MIMO (multiple-input multiple-output) antennae arrays linked to a software defined radio (SDR) platform with IMT-2020 in mind, while cellular network provider Verizon has begun its own field trials in the US.

The draft report, entitled “Minimum requirements related to technical performance for IMT-2020 radio interface(s),” can be found on the ITU website.

The US Federal Communications Commission has formally authorised he first Long Term Evolution for Unlicensed (LTE-U) devices, allowing LTE devices access to the unlicensed 5GHz band for the first time.

“This is a significant advance in wireless innovation and a big win for wireless consumers. LTE-U allows wireless providers to deliver mobile data traffic using unlicensed spectrum while sharing the road, so to speak, with Wi-Fi,” claimed FCC Chair Ajit Pai of the agreement. “The excellent staff of the FCC’s Office of Engineering and Technology has certified that the LTE-U devices being approved today are in compliance with FCC rules. And voluntary industry testing has demonstrated that both these devices and Wi-Fi operations can co-exist in the 5 GHz band. This heralds a technical breakthrough in the many shared uses of this spectrum.”

The FCC’s certification extends to hardware from Ericsson and Nokia, and cellular providers T-Mobile and Verizon have confirmed they plan to integrate LTE-U technology into their existing LTE networks. The certification process took two years, a process extended owing to concerns that the LTE-U equipment could interfere with Wi-Fi signals using the same unlicensed 5GHz spectrum but now mitigated by design changes led by a Wi-Fi Alliance test plan.

Anyone using GNU Radio compatible software defined radios, including the LimeSDR, may want to have a look at Universal Radio Hacker, an open-source tool for analysing radio signals developed by Johannes Pohl.

Brought to our attention by Hacker News, Universal Radio Hacker is designed to make it as simple as possible to demodulate and analyse unknown radio protocols. Compatible with GNU Radio device backends, as well as offering native support for HackRF and RTL-SDR devices, URH is a powerful tool for anyone reverse-engineering wireless protocols or troubleshooting an installation. Compatible with Linux, Windows, and macOS, the software is written in Python and requires only Python 3.4 or above, numpy, psutil, zmq, PyQT5, and a C++ compiler.

Examples of URH’s interface can be found on the GitHub repository, along with the full source under the permissive Apache Licence 2.0.

If you’re wondering just how the various blocks in GNU Radio actually work, then the grblocks blog is one to follow – beginning with its in-depth explanation of the Frequency Xlating FIR Filter block.

Designed to break down the functionality of various lesser-understood GNU Radio blocks, the grblocks blog has launched with a detailed look at the Frequency Xlating FIR Filter – a block designed to perform frequency translation and downsampling of a signal. The write-up includes instructions on the block’s use and an example flowgraph, and will be followed in the future with additional detailed explanations of other block types.

For an overview of just what goes into making an SDR built on a field-programmable gate array, like the LimeSDR, then you could do a lot worse than Pentek’s Putting FPGAs to Work in Software Radio Systems Handbook, released in its tenth edition this month.

Written, naturally, with Pentek’s own products in mind, the 90-page white paper nevertheless offers a good overview of a software radio system and how it can be implemented on an FPGA – and, indeed, why doing so is a good it for the technology. The document is available to download for all EE Times members from the Learning Centre, and membership to the site is free if you haven’t already registered.

Finally, our friends at RTL-SDR have a fascinating write-up on a proposal to turn a global array of low-cost SDR devices into a giant radio telescope in order to search for giga-Jansky fast radio bursts.

Detailed in a paper by Dan Maoz of Tel-Aviv University and Abraham Loeb of Harvard, the project looks to the use of low-cost SDR devices and the radios in cellular phones to create a global network of devices designed to listen for fast radio bursts (FRBs). Using GPS clocks for accuracy, the project proposes that it would be possible not only to detect FRBs but also triangulate their location in the sky to within arc-second accuracy – and without the need for large, high-cost radio telescope hardware.