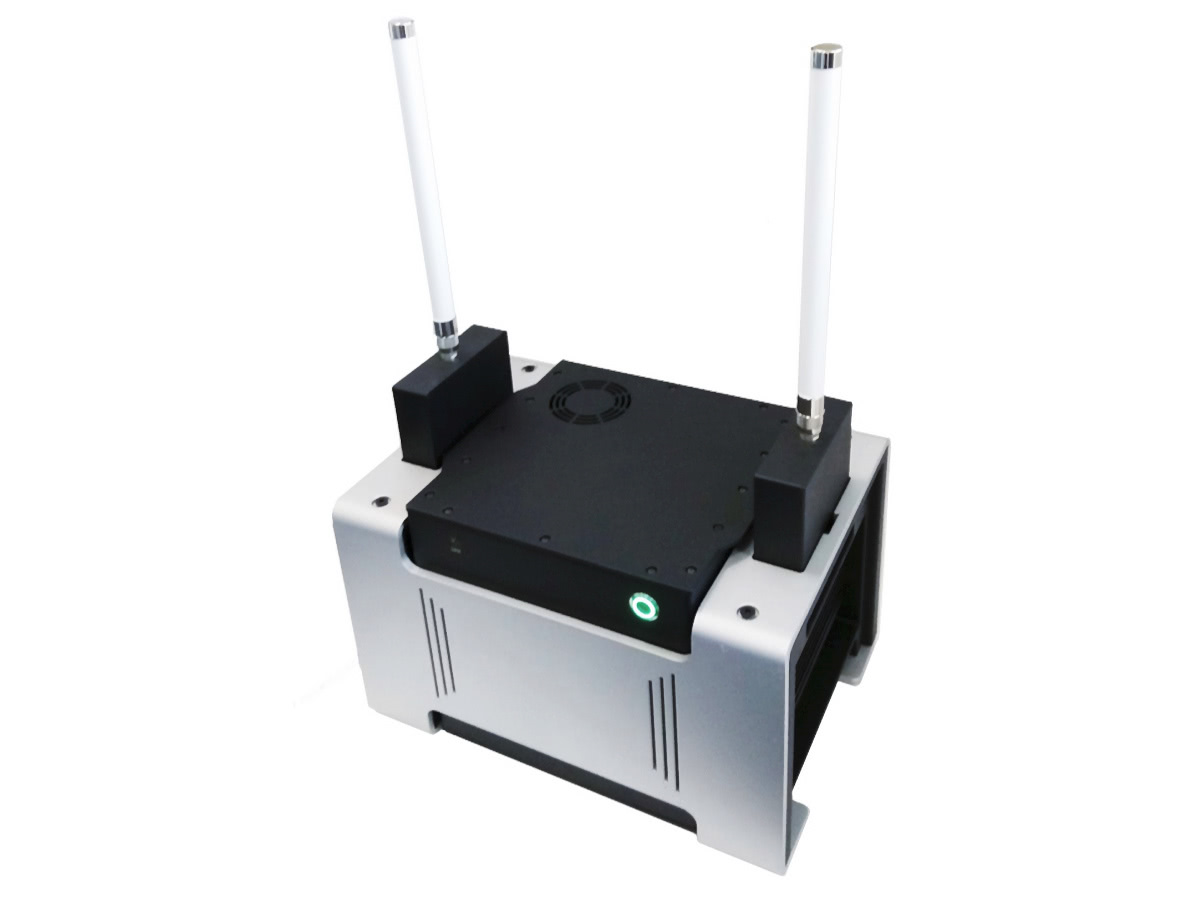 The LimeNET network-in-a-box crowdfunding campaign has officially opened, and comes with the unveiling of a new PCI Express version of the LimeSDR: the LimeSDR QPCIe.

Announced earlier this year, the LimeNET campaign seeks to produce a range of all-in-one software defined radio (SDR) platforms based around the LimeSDR. The entry point is the LimeNET Mini, a compact 105 x 110mm machine powered by an Intel Core i7-7500U processor and with 32GB of memory; those requiring more power have the option of the more powerful LimeNET Enterprise with its Core i7-6700 processor and externally-housed LimeSDR; those who need the ultimate performance, meanwhile, should look at the LimeNET Core, featuring a 10-core Intel Core i7-6950X processor, 64GB of RAM, and an all-new PCI Express LimeSDR, and also featuring an optional aluminium amplifier chassis to turn it into the LimeNET Base Station.

Dubbed the LimeSDR QPCIe, the new PCI Express variant of the LimeSDR builds on the original add-in card with a range of improvements. Chief amongst these is a second LMS7002 transceiver chip, allowing for a 4×4 multiple-input multiple-output (MIMO) configuration to the original board’s 2×2 MIMO limit. LimeSDR QPCIe cards are expected to begin shipping at the end of November this year alongside the LimeNET Core, while the LimeNet Mini and Enterprise units are due to ship in October. The Amplifier Chassis and Base Station, meanwhile, are expected to begin shipping in February next year.

More details are available on the LimeNET Crowd Supply campaign page, with 48 days left on the clock to reach a $50,000 funding goal.

For those working with LimeSDR hardware already, some notes on calibration – starting with the news that as of this week the LimeSuite software has received source code commits to improve its calibration capabilities courtesy developer Josh Blum, available now on the LimeSuite GitHub ‘master’ branch.

If you’d like a little help with calibrating your LimeSDR through LimeSuite, meanwhile, Tegwyn Twmfatt has posted a video guide to the forum. Detailed in full on his Hackaday project page and available to watch via YouTube, Tegwyn’s video covers the construction of a simple FM receiver in Pothos, bumping its frequency by 1MHz, and then using LimeSuite to manually calibrate the LimeSDR for best transmission and reception.

A new levels diagnostics guide posted to the wiki aims to help where different levels are observed across LimeSDR A and B channels. Although shot, the straightforward guide offers a checklist for diagnosing issues with reduced transmission and reception levels or problems with levels being different between the A and B channels. Of particular note are the measured level differences: 3-15dB suggesting mismatch in GUI settings or RF matching, 6dB+/-1dB suggesting damage to one LNA or TX pin, and anything above 25dB suggesting there is something very mechanically wrong.

The wiki entry also includes a list of the information needed in any problem report including the frequency or frequencies at which the differences in gain were recorded, software and hardware version information, and a note to include the LimeSuite ‘.ini’ configuration file whenever possible.

People just starting to experiment with the LimeSDR and looking for a beginner’s guide should point their browsers in the direction of Marijus Bernotas’ latest video, which walks through using the LimeSDR to receive shortwave radio stations.

While Marijus’ video uses GQRX on Canonical’s Ubuntu Linux, the tutorial can also be followed by anyone using the same software on other compatible platforms; Marijus notes that Windows users need only install the PothosSDR bundle to receive a copy of GQRX.

Networking giant Cisco has announced its membership of the OpenAirInterface (OAI) ecosystem, offering support for its implementation of the Small Cell Forum’s nFAPI MAC/PHY split base station architecture.

“Even though Cisco has licensed the nFAPI libraries under the permissive Apache 2.0 license, enabling them to be integrated by the widest possible set of stakeholders including closed source proprietary RAN products, we do not underestimate the real challenges in getting such capabilities implemented,” said Cisco’s Mark Grayson following the membership announcement. “We will use our membership of OAI to demonstrate how to integrate the open-nFAPI libraries into an existing LTE RAN protocol stack; the integration between the lower nFAPI libraries and the PHY layer implemented on a Software Defined Radio platform as well as the integration between the upper nFAPI libraries and the MAC and RRC layers.”

Cisco’s membership of OAI brings the non-profit consortium a step closer to its goal of the development of fully open-source hardware and software for all areas of a 5G cellular networking stack running on commercial off-the-shelf (COTS) hardware.

Finally, members of the popular eHam.net amateur radio forum have ignited a fascinating discussion on off-the-shelf antenna analysers, which contains a range of advice for anyone looking into checking the performance of existing antennas, modifying antennas, or even designing their own.

While everyone involved has their own favourite analyser, from entry-level easily-handled devices all the way through to bulky Hewlett-Packard Network Analysers, some common names pop out: devices from Rig Experts are recommended for acceptable accuracy and compact size at a reasonable cost compared to more industrial-grade tools, while one member recommends the Comet CAA-500 Mark II with its colour graphic display and cross-needle meter. For those on a budget, the Sark-100 and its pocket-sized variant the Mini-60 come recommended, too.

Marty Wittrock has been a licensed amateur radio operator since 1973 under callsign KN0CK, with a love of designing custom equipment to fill a need. It’s no surprise, then, to find that he has jumped into the world of software defined radio (SDR) with great enthusiasm.

“The flexibility of the hardware to the applied applications and the user interfaces of those, especially the spectra/waterfall displays and other unique features that the developers add to the SDR app,” Marty explains of his attraction to SDR, from his home in Cedar Rapids, Iowa. “It’s limitless in terms of what can be achieved and that’s what makes it especially invigorating to me.

“With the advent of the RTL-SDR I designed and built a 120 MHz HF [High Frequency] Upconverter that allowed it to tune the entire HF range from 0.5 MHz to 56 MHz (160m to 6m), and sold many of these SDRs domestically and internationally – 327 to be exact,” Marty recalls. “From there I became entrenched with other SDR with purchases and used the HackRF Blue, Red Pitaya, Flex 5000A, LimeSDR, and recently the mcHF SDR.

Speaking of his achievements, two stand out in Marty’s mind: “The design and build of my HF Upconverter, that was a great seller and very popular for awhile when SDR was really emerging as a low cost way to listen to the HF and other V/UHF [Very/Ultra High Frequency] bands. But more recently I think my contribution to the LimeSDR effort has really given me the most satisfaction seeing it from when it started and what it’s grown into now. LimeSDR has a bright future ahead, trust me!”

Marty’s experience with the LimeSDR began as a reviewer: “I was actually recruited by Maarten Ectors – Vice President of Internet of Things at Canonical/Ubuntu – in early February of 2016 to review the LimeSDR and then blog on it to those blogs that I have a connection to, especially one of the most established blogs, RTL-SDR.com, in hope that it would inspire others to enter the LimeSDR fray. I joined that fray at the very beginning, when no-one knew what a LimeSDR – after it was SoDeRa – was. The rest, as they say, is history. I get great satisfaction being a part of the MyriadRF forum and helping others with their LimeSDR issues, too, having been in it since the beginning.

“Don’t make the mistake of getting involved with low-cost SDR any more,” Marty offers as advice for those new to the world of SDR. “Enter the market with a medium-cost SDR solution that has good specs for receive – > 0.1uV sensitivity and 120dB dynamic range to start – because it will carry you further into your SDR experience than the ‘cheapy SDRs’ will.” That’s not to say that there isn’t room for the current range of medium-cost SDR platforms to evolve, though. “I’d REALLY love to see Lime Microsystems design and develop a broader band SDR – 10 kHz to 20 GHz – that would employ a software wrapper to that hardware that would allow it to be used with the OpenHPSDR application series for Windows, Linux, and other homebrew applications for even Arduino in a minimalist sense. That would blow away a lot of the market and drive MANY users and radio enthusiasts to ‘LimeSDR-Pro.’

“I have a Dell 3020 with dual-boot capability – Windows 10 and Ubuntu 16.10 – that allows me to use the LimeSDR in both software realms, Windows and Linux,” Marty explains, describing his SDR workstation configuration. “I tend to stay with SDRConsole V3.0 that Simon Brown is developing for the LimeSDR as my primary means to use the LimeSDR, but recently have branched out to SDRAngel which is a great application for Linux that has receive and transmit operational. I have other smaller ‘cube’ PCs that I use with my LimeSDR using the same apps and with GNU Radio Companion, Pothos, and GQRX, but the Dell 3020 is my primary PC for LimeSDR and other SDRs at the moment.”

Through 47 years of experience in radio and electronics under his belt, a love of making his own equipment, and his enthustistic participation in the LimeSDR community, Marty has a wealth of stories covering both successes and failures. “I was designing a MOSFET RF amplifier for the Red Pitaya such that I could get 10W – 15W output with the Red Pitaya’s 10mW input – this same amplifier will be used for the LimeSDR eventually, too,” Marty recalls of one of his most hair-raising experiences, “and during critical tuning of the MOSFET bias for maximum RF output – – with a well-heatsinked final MOSFET – I not only fried that MOSFET but it took all the power circuit traces and power RF choke along with it in smoke! What a mess, and I was getting close to meeting my 10W to 15W output power on SSB, too. I still plan to pursue that design for the Red Pitaya and LimeSDR, but I’m going to be a lot more careful at that last critical step!”