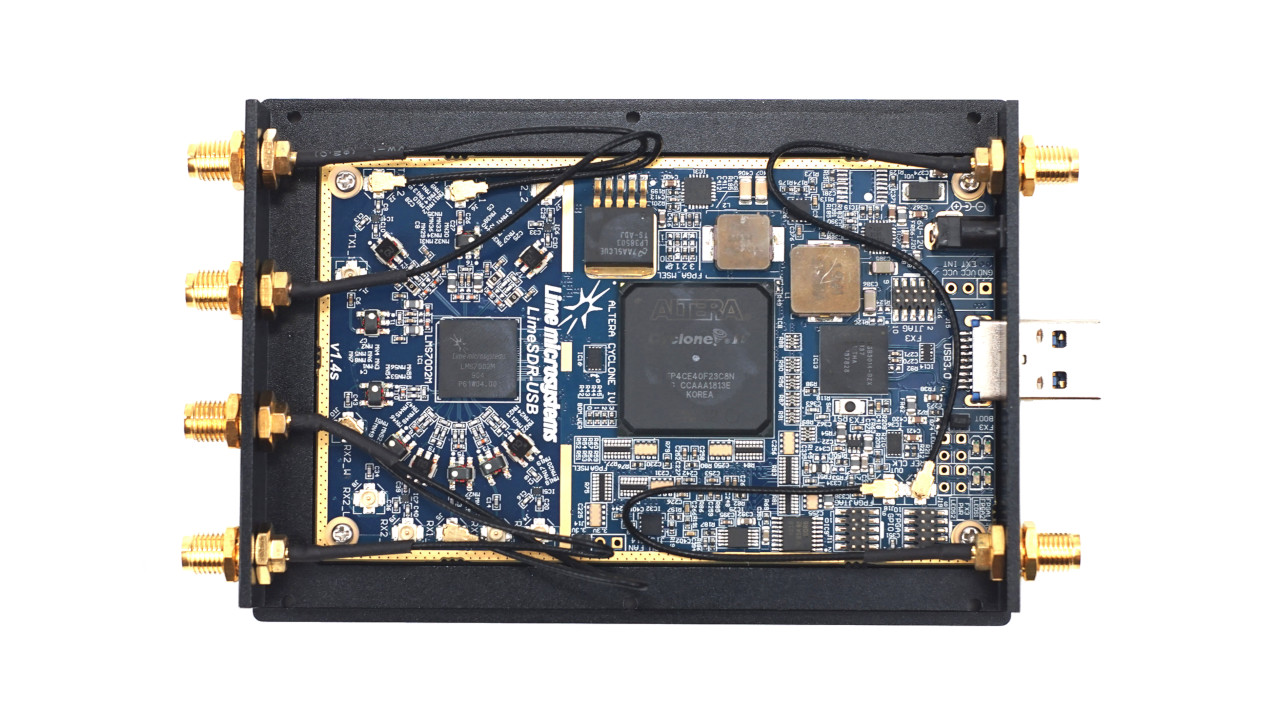 Manufacturing of the LimeNET Micro is underway, after initial volume production was delayed by selected components entering end-of-life (EOL) status.

“A few of the parts we were planning to use went end-of-life just as we were in the process of setting up a volume production run,” explains Lime Micro’s Andrew Back of the delay. “The good news is that we’ve identified alternative parts and updated our design to accommodate them.

“Doing so took us a little while, as we had to go through our design and manufacturing verification process once again. The new parts are due to arrive in about two weeks, and we expect to ship outstanding orders before the end of November. While this delay was disappointing, we are committed to making LimeNET Micro available as a stock item, and these sort of delays shouldn’t happen in the future.”

The full update is available on the Crowd Supply campaign page.

Hacker Gadgets has launched its crowdfunding campaign for the Lime AC Case, an active-cooling heatsink and chassis designed specifically for the LimeSDR Mini and LimeSDR USB.

“Lime AC (Active Cooling) Cases are designed for LimeSDR users who want to better manage heat generated by their devices,” the project’s creators explain. “The cases also make LimeSDRs more portable – protecting the PCB from damage – while they provide RF shielding for enhanced performance. We’ve designed one case for the LimeSDR Mini and three versions for the LimeSDR USB Type-A.”

The LimeSDR Mini variant is compatible with both v1.1 and v1.2 boards, though requires that the metal RF shield is desoldered and removed – a process which carries a risk of damage and which would void a warranty. The LimeSDR USB variants, meanwhile, are available in three thicknesses, and do not require any modification to the board itself.

In three of the four designs, a small fan can be attached and detached as required to provide additional cooling above and beyond the combined chassis and heatsink; only the LimeSDR USB Thin variant lacks the option to mount a fan.

Community member Daniel Estévez has published a guide to using an external reference with the LimeSDR Mini, as part of his work on transmitting and receiving signals to and from the QO-100 satellite.

“A while ago I spoke about feeding an external reference to the LimeSDR USB. Now I wanted to use an external reference with the LimeSDR Mini that I have in my QO-100 groundstation to lock all the system to GPS,” Daniel explains. “Preferably I wanted to use 27 MHz as the reference, since this is what I am using in my LNB, so this would save me from having to run 10MHz or another frequency to the groundstation.

“It is possible to feed in an external clock instead of using the [on-board] VCTCXO by removing the 0 Ohm resistor R59 and installing R62, which is not fitted by default,” Daniel continues. “The 0 Ohm resistor R62 goes directly to the clock input U.FL connector. There are only three pads for the two resistors, so they share a common pad and it is only possible to install one of them. To switch R59 to R62, it is enough to rotate the resistor in the red box by 90º (so in the figure the resistor would be rotated from a horizontal position to a vertical position).

“This is the only hardware modification that needs to be done. Apparently it is possible to use any external clock between 10 and 52 MHz just by changing a resistor and calling an API function. In particular, it is not necessary to modify the FPGA gateware. I understand that there is a NIOS CPU in the FPGA gateware that runs from the reference clock. This means that this CPU will run slower or faster depending on which reference frequency you use, but I don’t think it is a major concern.”

Daniel’s full guide is available on his personal website.

Videos and slides from the GNU Radio Conference 2019 (GRCon19) are now available, including the technical talk on the future of GNU Radio beyond release 3.8.

Highlights from GRCon19 include a look at the future of the GNU Radio project, a look at the development of a Turing test for radio intelligence, the optimisation of radio settings for algorithms, enhancements designed to improve GNU Radio’s usability for space-based research, and even a look at the operation of the Apollo communications module.

Vidoes of all 40 presentations from the four-day GRCon19 event, which included a renewed focus on tutorials and walkthroughs including those aimed at beginner users, have been uploaded to the project’s YouTube channel. The supporting slide decks, meanwhile, can be found on the GRCon19 Presentations page.

RTL-SDR has highlighted a new plugin for SDR# from Eddie MacDonald, designed to make the popular software more accessible.

Eddie, who launched a dedicated website for SDR# plugins last year, has designed his latest plugin to provide easier keyboard-based control, an improved toolbar, a new on-screen display, and a range of keyboard shortcuts – all of which combine to make the software more accessible to people with disabilities.

While the current version is ready to use once downloaded from sdrplugins.com, Eddie has indicated he’s working on a future revision which will incorporate screen reader support for the blind and partially sighted.

The Defence Advanced Research Projects Agency (DARPA) has announced the winner of its Spectrum Collaboration Challenge (SC2): GatorWings, from the University of Florida.

Designed to find artificially intelligent solutions to sharing increasingly crowded spectrum, the SC2 challenge has reached the conclusion of its three-year run with the crowning of GatorWings’ autonomous radio platform as the victor – and recipient of a $2 million prize.

“We were competing with some of the smartest people in this space, and have been competing against some of them since the first DARPA Spectrum Challenge in 2014,” says John Shea, co-lead of the University of Florida’s GatorWings team. “From that first challenge to today with SC2, you can see that incredible progress has been made – both in terms of what the teams can do and the sophistication of the decision engines, as well as their radio’s ability to work in much more complicated environments.

“This is going to push us towards making this a practical technology that can be deployed both by the military and commercial users. Through SC2’s efforts, we are moving towards using more intelligence in our radios and making things more adaptive and collaborative.”

Vanderbilt’s MarmotE took the second-place prize of $1 million, just one point behind GatorWings’ score, while Zylinium, a three-person startup, took third place and $750,000. Those interested in seeing the challenge final can view a recording of the event on YouTube.

SWLing Post has brought our attention to the 15.61 Crew DXcamp, an upcoming event which combines DXing with direct and committed action against climate change.

“The DXcamp, will be held between November 15-18 on Marajó island. It’s the first time that an event with these dimensions and characteristics is held in Brazil and maybe in South America,” its organisers Martin Butera and Ivan Dias explain. “The objective of 15.61 Crew is not just DX. We will take a direct and committed action to help the planet and raise awareness about the climate change that we are sadly living.

We will plant a tree on behalf of the European DX Council (EDXC). Planting a tree amid the flames that are killing the Amazon rainforest today will certainly not be your salvation, but it will leave a legacy and our contribution for a better world. We will raise awareness that together we can change this situation with actions such like waste sorting, buying products that can be reused, lowering electricity consumption, eating more organic fruits and vegetables, moving on public transport and so on.”

Satellite communications startup Kepler has opened pre-registration for its first development kits, due to launch in the first quarter of 2020.

“Various studies and market research reports predict billions of industrial IoT connections coming online in the next five years, and a global solution such as our everywhereIOT service will be key to achieving this. For this reason, we believe this to be exciting news for the market, as much as it marks an important milestone for Kepler. We are adding a unique set of capabilities for smart connected devices that did not previously exist in a satellite service,” claims Wen Cheng Chong, co-founder and chief technical officer at Kepler. “Together with the world’s OEMs, device and sensor manufacturers, and solution providers, we envision a future where Kepler’s everywhereIOT makes possible higher efficiencies across multiple industries.”

More information, and a link to pre-register, is available on the Kepler website.

TruSat is attempting to improve space sustainability through crowd-sourced visual satellite tracking, providing an open record of satellite orbits accessible by anyone with an interest in the topic.

“TruSat is an open source, citizen-powered system for creating a trusted record of satellite orbits in service of the long-term sustainability of outer space,” the organisation explains. “This TruSat System comprises two main elements: satellite observers, who make and report satellite observations, and TruSat software that autonomously processes observations of a satellite from multiple points around Earth into an orbit prediction and confidence assessment of that prediction. Space sustainability advocates may task the TruSat System to observe satellites of interest for sustainability purposes, and utilise the resulting data.

Currently available in prototype form, TruSat relies on visual tracking using augmented reality smartphone applications; the tracking data is then entered into a system built on the Ethereum blockchain, to ensure it cannot be tampered with. More details are available on the TruSat website.

The C-Band Alliance has issued an updated proposal to the US Federal Communications Commission (FCC) which calls for the clearance of 300 MHz of spectrum to support nationwide 5G deployments.

“Throughout this nearly two-year process, we have sought to work collaboratively as peers, to be responsive to the goals of U.S. policy makers seeking spectrum for 5G, and to work closely with our customers to protect their transmissions and understand their current and future network needs,” claims Intelsat chief executive and C-Band Alliance spokesperson Stephen Spengler of the organisation’s work. “Over this time, compression technology has continued to commercialise.

“We are confident that we can deliver a solution that not only maximises the clearing of mid-band spectrum to enable 5G in the U.S., but also fully funds a spectrally-efficient, next-generation compression infrastructure for programming distribution in the U.S. This solution represents unprecedented coordination among satellite operators, our customers, and the FCC, and we look forward to delivering to the U.S. an accelerated 5G deployment and the innovation and high-technology job growth that the deployment of 5G is expected to generate for the U.S. economy.”

The FCC has not yet responded to the updated proposal.

“In 2013, I was looking at a protocol called NBP, used to create a data network over amateur radio links. NBP was developed in the 2000s as a potential replacement for the venerable AX.25 protocol that’s been in use for digital links since the mid-1980s,” Guillaume explains. “I believed it was possible to create an even better protocol with a modern design that would be easier to use and inexpensive to physically implement.

“It took six years, but the result is New Packet Radio (NPR), which I chose to publish under my call sign, F4HDK, as a nom de plume. It supports today’s de facto universal standard of communication—the Internet’s IPv4—and allows data to be transmitted at up to 500 kilobits per second on the popular 70-centimeter UHF ham radio band.”

Guillaume’s full write-up on the project is available on IEEE Spectrum.