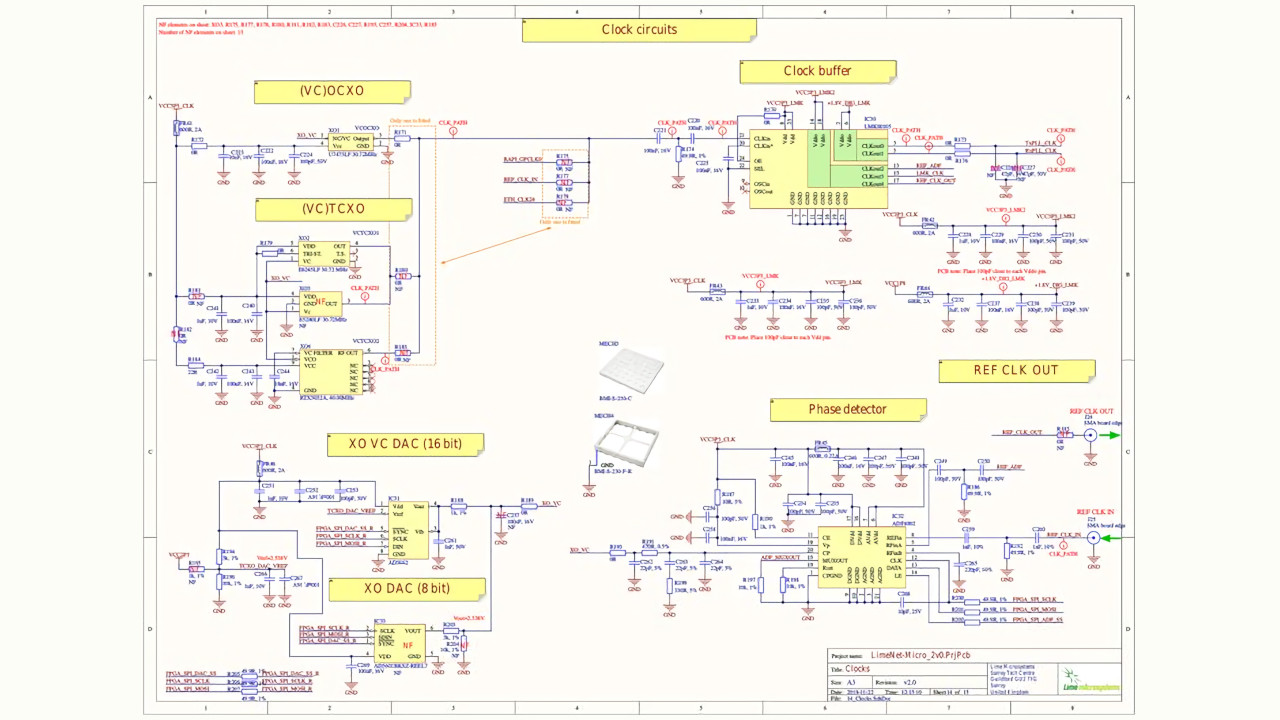 The board design files for the LimeNET Micro v2.0, which includes expanded bandwidth for the radio portion as well as making more features of the Raspberry Pi Compute Module 3 available, have now been published to the Myriad-RF GitHub repository.

Now, in-keeping with the open nature of the project, the design files for the LimeNET Micro v.2 have been published to the Myriad-RF GitHub repository. These files, in Altium Designer format, include full schematics, PCB layout, and associated manufacturing files, published under the permissive Creative Commons Attribution 3.0 Unported licence.

The LimeNET Micro v2.0 is still available to order through the Crowd Supply campaign, at a $30 discount over the post-campaign pricing.

The MarconIISta project, which has put a LimeSDR radio on the International Space Station to survey global radio frequency spectrum usage and carry out other experiments, has now gathered more than ten weeks of data totalling 9GB.

In the latest project update, Martin Buscher details the successful reception of 9GB of radio frequency data – indicating that “all bugs have been eliminated” from the system – which includes 16 days of VHF recordings, 33 days of UHF recordings, 13 days of L-band recordings, and 24 days of S-band recordings. “We will now start to look into various bands that initially were of secondary interest,” Martin continues, “after which we will look at the amateur bands again to investigate time/season variations of the signals.”

For those interested in what the project has found so far, Martin has shared a series of plots from the current data set and is asking for assistance in identifying the signals via the site’s comment section.

The FossaSat-1 project, which is looking to become Spain’s first satellite launched by a non-governmental organisation, has an official home on Hackaday, where details of the open source picosatellite system can be found.

Developed by Fossa Systems, a not-for-profit organisation based in Madrid, the FossaSat-1 is built around an Atmega-328P microcontroller and uses low-cost LoRa radio modules for communication – meaning, its creators promise, “anyone will be able to communicate with a satellite fusing modules found online for under €5 and [using] basic wire mono-pole antennas.”

As well as the new Hackaday Project page, Fossa Systems keeps a project blog and publishes source code and hardware designs to GitHub under the GNU General Public Licence v3. At present, the company is aiming to launch the 5cm³, 250g satellite in the second quarter of 2019.

Twitter user cn0Xroot has drawn our attention to a little something for those who like to work at the command line: Rakesh Peter’s retrogram-soapysdr project.

Designed for use with any radio which can work through SoapySDR, retrogram-soapysdr provides a live wideband spectrum analyser rendered in ASCII art at the terminal. The spectrum can be panned, zoomed, centred to a frequency, have its sampling rate or bandwidth adjusted, a reference level set, its dynamic range adjusted, its frame rate increased or decreased, and the radio tuned, all using shortcut keys while the spectrum is being updated.

The SoapySDR variant of the project is based on earlier work for ADALM PLUTO and the RTL-SDR families, while all share their origins in code originally written by Ettus Research.

Tysonpower’s Manuel has published a build of a 3D-printed carbon0rod dual-band Yagi antenna, for satellite communications, which he claims can be put together for around €20.

“A lot of ham radio operators use an Arrow dual band Yagi that is made by a company in the USA to make contacts over satellites. The antenna has enough gain for use with a low power 5 W handheld radio and is relatively light,” Manuel explains. “It costs around $150, what is not cheap. If you live in Europe you pay even more because of shipping etc.

“I found two German ham radio operators that published information online to build Yagi antennas. The first one DK7ZB has some information about single band Yagis and a simple match. DL3RTL used his plans and made an Arrow style dual band Yagi out of it. I used these informations and designed a carbon version that is ultra light and simple to build because of the use of 3D printed parts.”

Full details, including a video of the build, are available on the Tysonpower blog, while the 3D printable parts have been published on Thingiverse under a Creative Commons Attribution Non-Commercial licence.

Researchers at the Georgia Institute of Technology have created a radio filter system which, they claim, can be quickly and easily tuned for various frequencies – and it’s based on origami, the art of paper folding.

“The Miura-Ori [origami] pattern has an infinite number of possible positions along its range of extension from fully compressed to fully expanded,” explains researcher Glaucio Paulino, the Raymond Allen Jones Chair of Engineering and a professor in the Georgia Tech School of Civil and Environmental Engineering. “A spatial filter made in this fashion can achieve similar versatility, changing which frequency it blocks as the filter is compressed or expanded.”

“A device based on Miura-Ori could both deploy and be re-tuned to a broad range of frequencies as compared to traditional frequency selective surfaces, which typically use electronic components to adjust the frequency rather than a physical change,” adds Abdullah Nauroze, graduate student, of the project’s potential. “Such devices could be good candidates to be used as reflectarrays for the next generation of cubesats or other space communications devices.”

More information on the project can be found on the Georgia Institute of Technology website.

The US Defence Advanced Research Projects Agency (DARPA) has announced the winners of the Spectrum Collaboration Challenge’s latest qualifying round, with 15 teams being selected to compete in the grand finale next October.

Designed to find technological solutions to the problem of ever-growing radio applications vying for fixed portions of radio frequency spectrum, the latest qualifiers for the Spectrum Collaboration Challenge saw fifteen teams selected to pass to the next round and six walk away with cash prizes: Zylinium, MarmotE, Sprite, Erebus, Gator Wings, and IDLab’s SCATTER project.

“The six different [challenge] scenarios were closely aligned to actual situations that our defence and commercial systems face in the field. The Wildfire scenario, for example, replicates the complex communications environment that surrounds an emergency response situation, while the Alleys of Austin scenario was designed to mimic what’s needed to help dismounted soldiers navigate and communicate as they sweep through an urban environment. This real-world relevance was critical for us as we want to ensure these technologies can continue to develop after the event and can transition to commercial and/or military applications.”

More details on the competition, which focuses on using machine learning for efficient spectrum management, can be found on the official website, while RCR Wireless News and IEEE Spectrum have published write-ups of the latest qualifying round.

The UK communications regulator, Ofcom, has launched a consultation to make the deployment of private radio networks in previously-reserved spectrum, including private cellular deployments, both cheaper and more accessible.

In its consultation document, Ofcom details plans to open up the 3.8-4.2 GHz, 1,800 MHz, and 2,300 MHz bands – current used by satellite ground stations and wireless access systems, the 12 Concurrent Spectrum Access (CSA) licensees, and the Ministry of Defence (MOD) respectively – to lower- and medium-power uses based on an £80 per 10 MHz or per twin-3.3 MHz block charge for coverage in a 50 metre area. At the same time, new regulations would allow for a three-year site licence for access to bands currently allocated under the Mobile Trading Regulations (MTR) for a £950 fee.

Ofcom is positioning the revised regulations, which are available in full as part of the consultation document (PDF warning), as making it easier for individuals, start-ups, and established enterprises to deploy networks for use in everything from the Internet of Things (IoT) to mining, agriculture, and voice and data cellular services.

If Ofcom’s proposals are accepted, licences would become available in the second half of 2019.

Vodafone’s UK arm has come up with an interesting method of hiding the multitude of antennas required for mass deployment of 5G cellular services via small cell systems: hiding them in manhole covers.

“These fibre-connected 5G-enabled small antennae are the foundation on which connected smart cities will be built,” the company claims. “5G connectivity will allow connected traffic lights instantly to reroute road traffic around congestion, councils automatically to schedule repairs for broken infrastructure like street lighting, and businesses to manage how much energy they use intelligently.”

The company has already installed two types of connected manhole covers at its Newbury office and technology centre: a reinforced purpose-built unit the size of a water butt sunk into the ground, and another which reuses an existing cast-iron manhole cover. Both, the company claims, can carry voice and data over a 200 metre radius at a low power draw.

More information is available in the company’s press release.

Finally, Ted Yapo has published a project to turn a low-cost USB-connected serial port adaptor into a software defined radio transmitter capable of everything from sending audio to controlling an RC toy.

“Common USB-to-UART bridges are capable of handling 2Mbps or more of throughput – enough to reach medium-wave (AM broadcast band) frequencies directly,” Ted explains of his project. “And, unlike the true serial ports of yesteryear, the slew rate of TTL-level ports is not controlled: they have very fast edges which generate a rich set of harmonics up the bands.”

Using an FT232RL serial port adapter, Ted has proven that it can transmit audio on 1 MHz – capable of being received on an unmodified AM radio – and even transmit control signals on 27 MHz to drive a radio-controlled truck toy.

Ted’s full project log is available over on Hackaday Projects, while his code has been published to GitHub under the MIT Licence.