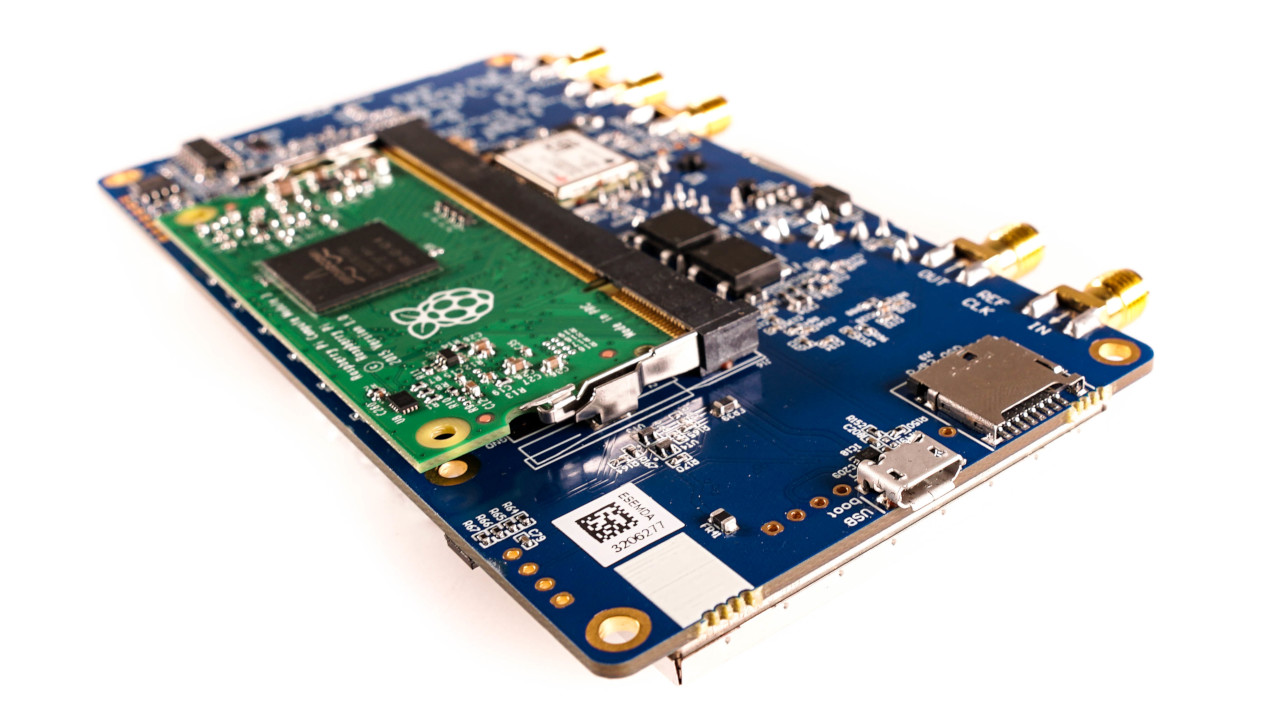 The LimeNET Micro crowdfunding campaign continues, and has brought with it a welcome change to the design which will greatly increase the radio’s available bandwidth and sample rate while also adding support for camera and display accessories.

Announced via a crowdfunding campaign late last month, the LimeNET Micro is the latest entry in the LimeNET family of open all-in-one software defined radio (SDR) basestation hardware. Based on the same technology as the LimeSDR, the LimeNET Micro mates the radio hardware with a Raspberry Pi Compute Module 3. Previously, this relied upon the Serial Peripheral Interface (SPI) bus, reducing the bandwidth available – but a change in the design has now unlocked additional bandwidth.

“LimeNET Micro was originally designed with narrowband applications in mind, such as GSM and various IoT air interfaces,” explains Lime’s Andrew Back. “However, since launching the campaign we’ve received quite a few requests from users who would benefit from being able to use higher sample rates and bandwidths. We are now pleased to confirm that the LimeNET Micro design has been updated to use USB for connectivity between the Compute Module and transceiver.”

More details are available from the campaign update.

The MarconISSta project, which has put a LimeSDR on the International Space Station, appears to have recovered from early teething issues and is continuing to pull in data from the station’s amateur radio antenna array.

“We are happy to announce that we received another set of data. Commanding was performed on Friday instead of Thursday. This results in a loss of measurements that were planned on Thursday, however these measurements can be repeated next week,” project lead Martin Buscher posted in an update marking the project’s 43rd week, after earlier power issues had resulted in lost data.

“MarconISSta operational for four weeks in a row,” Martin continued in the following update a week later. “This does not sound too exciting, but MarconISSta is now operational for three weeks without unplanned interrupts. Last week, we looked into AIS, ADS-B and amateur-satellite L band. This week, we will focus on amateur-satellite VHF bands. This Thursday we receive the new VHF data. After that we will have no commanding window until November 22nd and therefore have to plan two weeks in advance. During this time, we will do a deeper investigation into amateur-satellite S band.”

As always, all project updates are available on the official website.

GNU Radio Foundation president Ben Hilburn is seeking support to extend its schedule of events with a new GNU Radio Symposium, to be held in London in the spring or early summer of 2019 or 2010.

To gauge interest for the event, Ben has set up an official survey which will also register applicants for more information as and when it becomes available.

While there are no shortages of pictures of the LimeSDR family in and out of cases, Twitter user Alex “HWR0” has shared one that’s a little more unusual: an X-ray of the board.

“Here is an X-ray of a #LimeSDR Board in an Alu-Case,” Alex writes, “where every available mmcx connector is routed to a SMA connector on the custom case front and backplates.” The image, taken as part of a beginner’s course in reverse engineering Alex is developing, followed a similar shot of a vintage Casio microcomputer with its individual components labelled – demonstrating a clear difference in the complexity and density of the respective circuit boards.

Alex’s X-ray image can be found on his Twitter profile.

The popular SDR# software package has received a series of updates early this month centred around adding and refining support for what its creators have dubbed the SpyServer Network – namely the ability to browse for other devices directly within the software.

Designed to take advantage of SDR#’s ability to provide access to software defined radio hardware over a network, the latest version of SDR# includes a built-in SpyServer Network Browser which lets users find and access publicly-listed SDR# networked instances on a global map. For those already using the SpyServer functionality, it also comes with a warning: all SpyServer systems will be automatically listed in the public directory by default, unless the configuration file is changed from its default to hide the server.

The SpyServer Network functionality was added in revision 1690 in late October, but only after receiving patches and tweaks was it considered ready for public use with r1700 – released as a general build under version number 1.0.0.1700.

RTL-SDR has highlighted work by two hams, Nico de Roo and Raydel Abreu Espinet, to decode images from the Geostationary Operational Environmental Satellite 16 (GOES 16) in Windows, rather than Linux.

Based on an original tutorial (PDF warning) written by Raydel, Nico’s updated guide (DocX warning) uses the free XRITDecoder tool, Xrit2Pic, and a Windows build of GNU Radio to receive and decode imagery from the GOES 16 weather satellite.

Previously, one of the few options for GOES 16 decoding on Windows was a commercial XRITDecoder, closed-source and costing $100, RTL-SDR notes.

The resulting application, dubbed glrpt, is available for download in source-code form from Neoklis’ website under the GNU General Public Licence Version 3. At present, only RTL-SDR-based receivers are supported, though Neoklis has indicated that support for additional radios may be added “if documented driver APIs are available.”

AMSAT South Africa (AMSAT SA) has published details of a new CubeSat micro-satellite project based on software-defined radio technology, dubbed the AfriCUBE, is being built alongside a previously-announced analogue CubeSat called Ketskous.

“AMSAT SA has announced that parallel to its analogue Kletskous CubeSat, the group is working on a digital project featuring a software defined transponder,” the organisation’s announcement explains. “Called AfriCUBE, the CubeSat will use the same space frame as Kletskous. Anton Janovsky is current building a prototype transponder.”

The Kletskous project, though, is struggling due to what AMSAT SA describes as “electronic component obsolescence [forcing] unwanted design changes to be made to ensure to ensure that when the time comes to construct the final launch unit, the main components are still available.” This follows earlier issues with a battery failure during balloon testing.

Those interested in becoming part of the team working on the AfriCUBE project are invited to email AMSAT SA on admin@amsatsa.org.za.

IBM has named Project OWL, which designs and builds mesh network devices for disaster response, as the recipient of its Call for Code global prize.

“In the worst disasters, chaos and misinformation are pervasive,” explains project lead Bryan Knouse in an interview with IBM following his group’s receipt of the Call for Code Global Prize, which comes with funding to further the project’s development. “With better information and better analytics, you can get the resources you need to the places that need it most. This type of efficiency can dramatically impact the number of people that can be saved in a disaster.”

The Project OWL system is based around addressing issues with Organisation, Whereabouts, and Logistics (OWL) following a disaster, using low-cost radio modules dubbed “ducks” which can cover a square-mile area in just five units communicating together via LoRa and providing Wi-Fi connectivity to anybody within the area.

More details on Project OWL can be found on the official website.

Hackaday’s Tom Nardi has written up a project by Andreas Eversberg to resurrect old, analogue cellular phones – first using traditional radios to form a base station, then switching to the LimeSDR or LimeSDR Mini.

“[Andreas’] software allows the user to create a functioning analogue base station for several retro phone networks used in Europe and the United States, such as AMPS, TACS, NMT, Radiocom, and C450,” Tom writes. “You can go the old school route and do it with sound cards and physical radios, or you can fully embrace the 21st century and do it all through a Software Defined Radio (SDR); in either event, calls to the base station and even between multiple mobile devices is possible with relatively inexpensive hardware.”

While cellular connectivity on SDR typically focuses on 2G upwards, Andreas’ project – dubbed Osmocom-Analog – shows that it’s also possible to use the technology to breath new life into classic analogue hardware – though Tom rightly warns that providing your own analogue cellular base station doesn’t resolve the other issue of the handsets being “impractical due to their monstrous size compared to modern gear.”

Tom’s write-up is available over on Hackaday, while more information is available on the Osmocom-Analog website and the software on a git repository under the GNU General Public Licence Version 3.

Finally, the IEEE Spectrum has covered a project by Thomas Witherspoon to build what is described as “a time machine” for radio: the Radio Spectrum Archive.

“Thomas Witherspoon is building a time machine, of sorts,” writes IEEE Spectrum’s Stephen Cass by way of introduction. “With it, you’ll be able to pick a date and tune through an entire broadcast band as if you had a radio that could pick up transmissions from the past. Sure, well-established shows already make past episodes available, but with Witherspoon’s time machine you’ll be able to hear not just that programming but everything else that was on the air as well: the local news, the commercials, the pirate stations, even the mysterious number stations that lurk on shortwave.”

Witherspoon is working hand-in-hand with The Internet Archive, a non-profit organisation which has found ways to preserve all kinds of media from text and video to video games and software, gathering recordings from around the world and finding a way to represent them in a standardised format for distribution and, with appropriate hardware and software, to replay them and analyse their contents. Later, Witherspoon hopes to see a web interface developed so visitors from around the world can browse the recordings.

Stephen’s full write-up of the project is available on the IEEE Spectrum website now, while more information can be found on the official website.