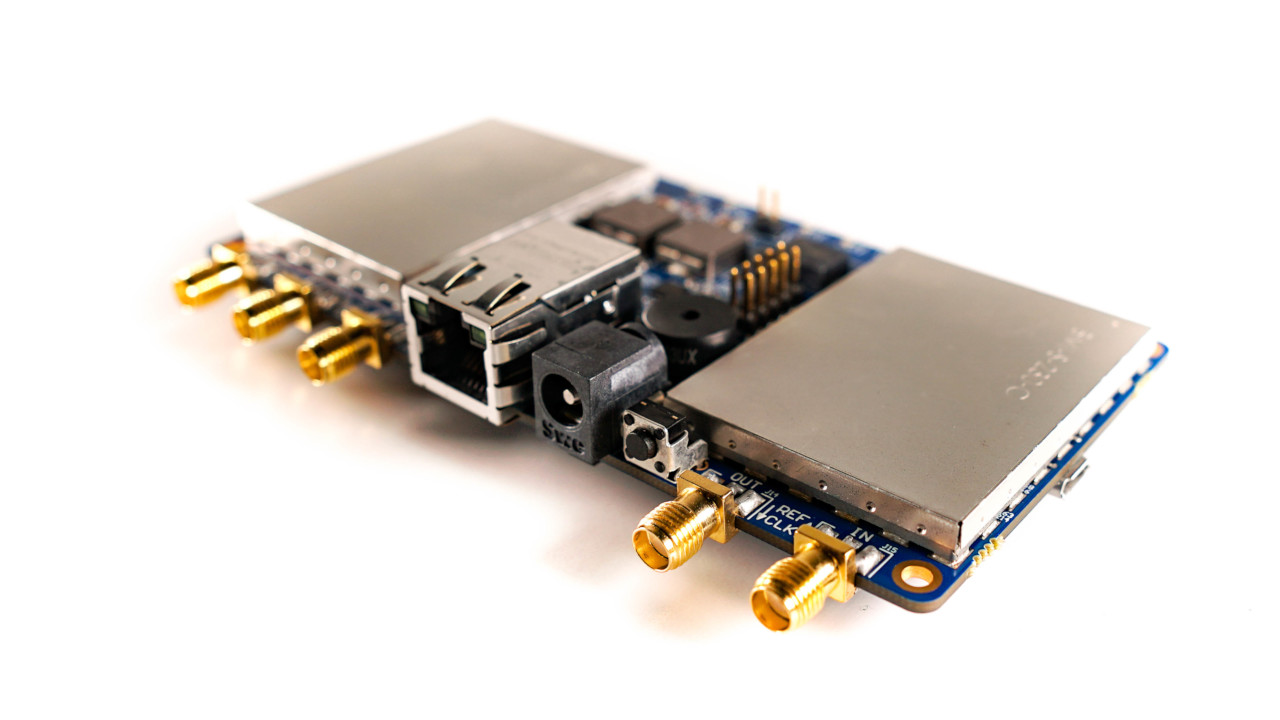 Lime Microsystems has launched a crowdfunding campaign for the LimeNET Micro, an all-in-one device which combines the LMS7002M field-programmable radio frequency (FPRF) chip with a Raspberry Pi Compute Module 3, bringing the LimeNET family to its lowest price point yet.

Designed with narrowband applications in mind, the LimeNET Micro operates from 10 MHz to 3.5 GHz – the same frequency range as the LimeSDR Mini – with a 1 MSPS sample rate at a 12-bit depth. Its transmit and receive channels are full duplex, while there’s a u-blox NEO-M8Q global navigation satellite system (GNSS) receiver on-board as a high-accuracy timing source.

Unlike the LimeSDR family, though, the LimeNET Micro is designed to be self-contained: an on-board Raspberry Pi Compute Module 3 – which can be swapped out for a Raspberry Pi 3 Model B+ or other Raspberry Pi model using a simple cable – provides general-purpose processing, while the entire unit can be powered from DC or via Power-over-Ethernet (PoE) for remote deployment. As with its predecessors, the LimeNET Micro is open-source and open hardware.

The campaign has already reached more than three times its funding requirement, with units available for order starting at $269 (taxes excluded) with shipping expected to begin in late February 2019. More information can be found on the Crowd Supply campaign page.

The MarconISSta project, which has put a LimeSDR on the International Space Station, continues, with work on a web interface for heatmap generation and the reception of 200 MB of new data over the past week.

“While waiting for new data, the student team keeps improving the GUI for data analysis,” project lead Martin Buscher writes in the project’s regular weekly updates. “At the same time, they prepare a web interface that let’s you create your own heatmaps! Just to mention this again, these students do this in their free time, without getting paid or getting credit points!

“After we had problems with the setup in the beginning of October, we had to wait two weeks to find out if the experiment works nominal again. Luckily it does,” Martin continues in the latest report. “On Thursday we received 200 MB of new data with many interesting captures. One of these was a varying artefact around 2402 MHz that seems to be oscillating in sync with the ISS’s orbit. Another interesting result of last week was that we received good data in UHF, even though we accidentally recorded using the L/S band patch antenna instead of the VHF/UHF antenna.”

Martin has warned, however, that there may be an impact on the project from the failed launch of a Soyuz MS-10 which was heading to the ISS on a resupply mission: “For the unlikely event that the remaining crew has to leave [and there is] no replacement, ESA currently checks which experiments can stay operational. If everything continuous to work nominal, MarconISSta can stay operational without crew on-board. For this reason, we expect to be online at least until February/March 2019.”

Regular updates can be found on the MarconISSta website.

Lime Microsystem has published an interview with community member Gaspar Karm, who has been working to add spectrogram acceleration to the field-programmable gate array (FPGA) on the LimeSDR Mini.

“I had a need for a spectrogram accelerator,” Gaspar explains in the piece on his work. “The first thing I tried was the GPU [host PC graphics processing unit], which worked, but I ran into problems when i wanted to accelerate a neural network on the same GPU.” The solution: using the on-board FPGA, which can be reprogrammed at will for a variety of tasks, as an accelerator.

“The FPGA of LimeSDR Mini was already quite packed,” explains Gaspar, “so the first step was to throw out everything I didn’t need – e.g. anything related to TX. Doing that, I got the utilisation down to ~25%. Next, I implemented the DSP [digital signal processing] blocks: DC removal – Gets rid of the centre peak on the spectrogram; Windowing and 8192-point FFT [fast Fourier transform] – Core blocks for the spectrogram; Average pooling – Applies an averaging window to the spectrogram, which reduces the noise and decimates the data-rate, enabling monitoring of 80 MHz of bandwidth with a data rate of only 2.5 MB/s. In addition, it saves a lot of FPGA resources – which kind of made it all possible.”

The final result: a spectrogram which runs smoothly on low-end Arm-based systems, and a dramatic reduction in the data rate from the radio to the host system. More information is available on the Lime Micro Community site, while the accelerator itself can be found on Gaspar’s GitHub repository.

Any LimeSDR users looking to experiment with Long Term Evolution (LTE) cellular connectivity should take a look at a set of instructions from Bastien Baranoff on getting up and running with OpenAirInterface and the LimeSDR Mini.

Bastien’s minimalist instructions are based on using the popular Kali Linux distribution with the LimeSDR Mini, and walk the user through installing a low-latency Linux kernel, SoapySDR, Lime Suite, and OpenAirInterface to create a 4G Long Term Evolution base station.

“The last puzzle piece with the lousy bursty throughput,” Bastien explains, “was partly solved by using the lte-softmodem -d switch Enable soft scope and L1 and L2 stats (Xforms), since it was built with the -x –xforms option, and partly by randomly moving the phone around and noticing there was a sweet spot where Firefox would download and install very fast.”

The full instructions can be found on Bastien’s blog.

Radio amateur Daniel Estévez is continuing his work on a 2.4 GHz transmitter for the Es’Hail 2 satellite, built from a BeagleBone Black single-board computer and a LimeSDR USB.

A product of Qatari Es’hailSat, Es’Hail 2 is to be the first geostationary communications satellite designated for amateur radio use and covering hams from Brazil to Thailand from its position 25.5 degrees East. Daniel’s transmitter, covered in an earlier OTA, targets the 2.4 GHz Phase 4 transponder, which is installed alongside a 10.45 GHz Phase 4 transponder, 250 kHz linear transponder, and 8 MHz transponder for experimental digital modulation schemes and amateur DVB broadcasts.

Videos from OsmoCon 2018, the annual conference for users and developers of the numerous open-source telecommunications projects under the Osmocom umbrella, are now available via the Chaos Computer Club Video Operations Centre (C3VOC).

Of particular interest to LimeSDR users will be a presentation from developer Pau Espin on work behind the addition of Lime Suite support to OsmoTRX, allowing easy use with the full LimeSDR family of software defined radios. Harald Welte has also offered a ten-year retrospective of the Osmocom project, serving as both a handy introduction for those unfamiliar with Osmocom and a means of catching up on the latest developments.

“Continued development of standard specifications for the LoRaWAN protocol is key to enabling interoperability between end-device providers and network providers,” explains Donna Moore, chief executive and chair of the LoRa Alliance. “The new specifications showcase how our members collaborate to continuously advance LoRaWAN. The rapid uptick of LoRaWAN Certified products validates that the market stands behind the need for IoT devices that deliver a proof of quality.”

The FUOTA functionality comes split across three individual specifications: LoRaWAN Application Layer Clock Synchronization, LoRaWAN Remote Multicast Setup Specification, andLoRaWAN Fragmented Data Block Transport Specification, all of which have been released this week in v1.0.0 form. While each brings its own functionality independently, all three must be implemented for FUOTA support.

More information is available on the LoRa Alliance website.

Those interested in the operation of CubeSats, miniature satellites designed to be built, launched, and operated at a signficantly lower cost than traditional full-scale satellites, will find plenty of detail in an article from NASA about Dellingr – “the little CubeSat that could.”

“A team of scientists and engineers at NASA’s Goddard Space Flight Center in Greenbelt, Maryland, set out on a quest. Their goal? To build a more resilient CubeSat — one that could handle the inevitable on-flight mishaps that bedevil any spacecraft, without going kaput,” NASA’s article explains by way of introduction. “They wanted a little CubeSat that could.

“It was uncharted territory for them — an engineering exercise par excellence. The team was used to building big spacecraft, with the layers of process, analysis and testing that makes them reliable. Switching to CubeSats would require adapting or in some cases creating new processes and approaches, modifying organizational structures, all while working fast and on a limited budget. But it was an experiment worth trying, as the lessons they were sure to learn would benefit the entire CubeSat community. They got to work in 2014 and, after three years of development, Dellingr was ready to take flight.”

The article covers the timeline from launch in August 2017 to its last notable mission log in early October 2018, including a range of issues encountered along the way from its ejection from the launch craft with a dead battery, a failure to keep track of the location of the sun, and the rather more serious problem of a loss of GPS positioning – all, thankfully, resolved by early February.

The article can be read in full on the NASA website.

“With one antenna, all’s well. But put another antenna next to it and that second one can be swamped by the strong signal coming from the first, making it deaf to the weaker signal it should be receiving,” the pair explain of the problem. “Two antennas are bad enough. But these days, a typical smart device can have many more. Their ranks usually include one or two antennas for Wi-Fi, one for Bluetooth, one for GPS, and two or four for 4G LTE cellular communications.

“The only sensible solution is a new approach to antenna design. Instead of creating antennas as individual elements and leaving it to the designers to choose where to fit them into a device, it’s better to design a suite of antennas that work well together as a system and then install that system into the mobile device as a single cohesive unit.”

The pair go on to detail existing approaches, including traditional polarised antennas and Fractus’ ‘invisible’ antennas, before detailing their company’s creation of more directional antennas by modifying the physical shape across three dimensions. “We can place antennas physically close together, within just a few centimetres,” the two explain. “But positioning them properly in three dimensions so they all work in harmony isn’t easy. We can’t leave that step up to the device designers or manufacturers, so we aren’t producing individual components. Instead, we’re manufacturing the entire set of antennas needed for a mobile device on one flexible 0.44-millimetre-thick printed circuit board. Flexibility reduces the cost of manufacturing because it lets us start the process in two dimensions and then turn it into a 3D package—by moulding a plastic shape and then wrapping it with the flexible circuit board.”

Finally, YouTube channel Freethink has published an interview with amateur astronomer Scott Tilley, who was responsible for rediscovery the long-lost IMAGE satellite after NASA had lost communication with it 13 years ago.

Scott’s work, detailed in full on his blog back in January this year and covered in an earlier OTA, was the catalyst for a successful effort by NASA to restore communication to the Imager for Magnetopause-to-Aurora Global Exploration (IMAGE) satellite, thought lost in December 2005 when it ceased communicating with ground stations.

Freethink’s video interview covers Scott’s role in the recovery of the satellite, long after NASA had declared it officially lost, his love of amateur astronomy, and the larger role for citizen scientists in general and how they have contributed to scientific knowledge over the years.

The video is live now on Freethink’s YouTube channel.