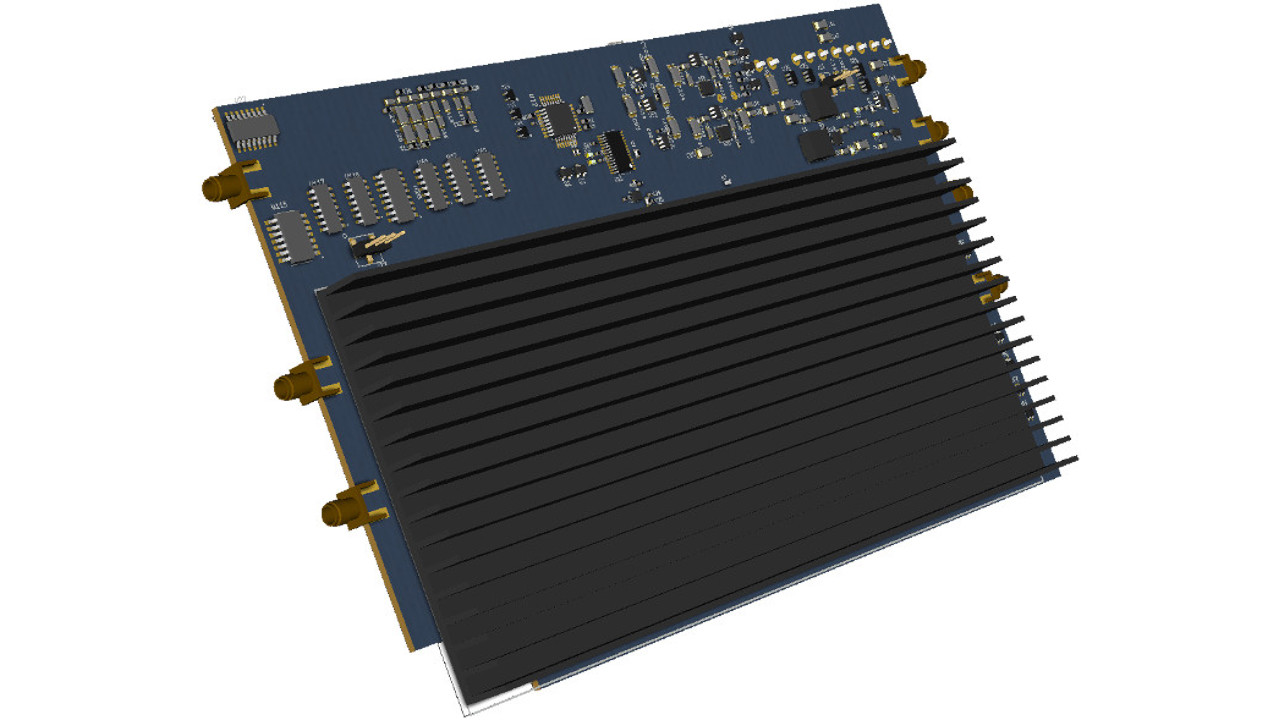 Schematics for the LimeRFE software-definable front-end module for LimeSDR and LimeNET devices have been released, as part of Lime Microsystems’ pledge that it will be fully open hardware.

“We’ve had a number of requests to share the LimeRFE schematic diagrams, and we’re pleased to report that they are now available on our new LimeRFE hardware design repository,” writes Andrew Back in a Crowd Supply campaign update announcing availability of the preliminary schematics. “As with all MyriadRF projects, LimeRFE will be fully open hardware.

“In due course, we will publish our full design database, which will include the board layout, the Bill of Materials, etc. In the meantime we encourage you to take a look at the schematics, which are provided both in PDF form and as a KiCAD project. We would appreciate any feedback you might have.”

The preliminary schematics are available now on the LimeRFE GitHub repository, where feedback can be provided as a GitHub Issue. The first hardware, meanwhile, is scheduled to ship to backers in mid-November 2019.

Community member Dave Crump has opened a forum thread which reveals how to manually control a fan on the LimeNET Micro, switching it from the default temperature-controlled setting to always-on or triggering it under custom conditions.

In order to better cool the built-in LimeSDR hardware, as well as the Raspberry Pi Compute Module 3 that powers it, the LimeNET Micro features the ability to connect a fan to the J8 header. By default, this is linked to an on-board temperature sensor. “As my application is processor-intensive,” Dave wrote in the forum, “I would like to run the fan all the time to cool the CM3 module. Is there a LimeSuite C call that I can make to control the fan from my application?”

An answer was soon provided by Zack Tamosevicius: a function which can be used to enable manual, rather than automated, control of the fan, and another to switch the fan on. Combined, they allow for permanently-on fan operation – or can be extended with other code to control the fan according to any other metrics required. “That works perfectly,” Dave confirms. “Now set to come on while transmitting and then set back to auto during standby.”

The full thread is available over on the Myriad-RF forum.

IEEE Spectrum’s Julianne Pepitone has written a piece asking whether amateur radio is a hobby, a utility, or both, as background for the ongoing issue of ever-more-crowded spectrum allocations.

Julianne’s piece opens with a complaint from 71-year-old radio ham Ron Kolarik regarding encrypted messages sent via the amateur bands. “Kolarik filed a petition, RM-11831, to the US Federal Communications Commission (FCC) proposing a rule change to ‘Reduce Interference and Add Transparency to Digital Data Communications,'” Julianne writes. “And as the proposal makes its way through the FCC’s process, it has stirred up heated debate that goes straight to the heart of what ham radio is, and ought to be.

“The core questions: Should amateur radio—and its precious spectrum—be protected purely as a hobby, or is it a utility that delivers data traffic? Or is it both? And who gets to decide?”

The piece covers both side of the argument: those who argue that transparency is a key aspect of ham radio, and those who believe that services like those of radio-carried email platform Winlink are useful and expand the hobby. “The battle continues in letters and comments to the FCC about the proposal,” Julianne concludes. “It could be months before the agency completes all of its comment periods and other processes and ultimately decides whether to codify the proposal or strike it down.”

The full piece is available now on the IEEE Spectrum website.

The Learn Engineering YouTube channel has published a beginner’s guide to antenna operation, aimed primarily at those who concern themselves more with the practical aspects than the underlying mathematics.

In the eight minute video, Learn Engineering focuses primarily on the core function of an antenna: to receive an electromagnetic wave and convert it to an electrical signal, or to receive an electrical signal and radiate it as an electromagnetic wave. While focused mainly on ideal dipole antennas, the short video does take a look at real-world antennas including those used for TV, satellite, and cellular telephone signals.

The video is available now on the Learn Engineering YouTube channel.

The Arduino Blog has highlighted a direct conversion receiver build by Michael LeBlanc, created as an upgrade from a regenerative receiver build now several years old.

“In the late winter of 2018-19, I decided to build a receiver that would provide a performance improvement to the regen I built a couple of years ago,” writes Michael. “It made sense to me that the next step in my radio-building self-instruction should be a ‘direct conversion’ receiver. DC radios have an oscillator running at the same frequency as the signal you’re trying to receive. This oscillating wave gets combined with the signal in a double-balanced mixer. The mixer converts the high-frequency signal down to audio frequency, where it can be amplified using several audio amp stages. It’s a very simple configuration, and the result is a very clean sound.”

Based on the DC40 design from Ashhar Farhan with upgrades from Ryan Flowers, the radio includes a frequency control and display based on an Arduino microcontroller board and an SI6351 oscillator.

Full details are available on Michael’s blog, while the radio can be seen in action in a YouTube video.

Ofcom, the UK’s communications regulator, has announced a consultation on licensing Digital Audio Broadcasting (DAB) on a small scale, with responses requested before the 4th of October.

“Small-scale DAB is a new way of transmitting digital radio that uses advances in software and low-cost computer technology to provide a flexible and inexpensive approach to the terrestrial broadcast of digital radio services to a relatively small geographic area,” Ofcom explains of its consultation. “In the UK, the concept was first tested by Ofcom engineer Rashid Mustapha in 2012 and subsequently the Government funded a series of trials, licensed and facilitated by Ofcom, to test the feasibility of the technology.

“The trials demonstrated that small-scale DAB can provide a robust and reliable means for small analogue stations to broadcast on digital, as well as for entrants wishing to launch new radio services on a digital terrestrial platform.”

The consultation covers Ofcom’s proposals for spectrum usage and licensing, its approach to developing a coverage area plan, and how it intends to advertise licences and assess applications for same. Full details, along with a form for offering a response to the consultation, are available on the Ofcom website.

Lightsail 2, an CubeSat experiment into solar sail propulsion for future spacecraft, has begun transmitting its Morse code beacon – though planetary reception is limited by its low inclination.

“The Georgia Tech Prox-1 spacecraft did its job perfectly, delivering LightSail 2 to the desired orbit for solar sailing,” says LightSail 2 project manager Dave Spencer in an interview for the Planetary Society. “Receiving the initial radio signal from LightSail 2 is an important milestone, and the flight team is excited to begin mission operations.”

The transmission includes a Morse code beacon, transmitting the satellite’s callsign of WM9XPA every 45 seconds. Those interested in attempting to receive it – and who are in the limited geographic footprint of reception, which must be between 42 and -42 latitude – can find details including the beacon structure on the Planetary Society website.

RTL-SDR has brought our attention to Pictor, Apostolos Spanakis-Misirlis’ project to create an open-source, open-hardware radio telescope based on software defined radio hardware.

“Pictor consists of a 1.5 metre parabolic antenna that allows anyone to make continuous and spectral (i.e. hydrogen line) drift-scan observations of the radio sky in the 1300~1700 MHz regime for free,” the project’s creators explain. “The goal of this effort is to introduce students, educators, astronomers and others to the majesty of the radio sky, promoting radio astronomy education, without the need of building a large and expensive radio telescope.”

As well as releasing the design for the telescope and its driving software for anyone to build their own, the prototype Pictor is available for free use over the internet: interested parties can request an observation on the official website, and receive the results via email once complete.

Details on building and running your own Pictor are available on the project’s GitHub repository.

Researchers from Boston University have published a paper describing how to bypass privacy features in Bluetooth Low Energy (BLE) to identify and track devices, and have come up with recommendations to protect future implementations.

“Bluetooth Low Energy (BLE) devices use public (non-encrypted) advertising channels to announce their presence to other devices. To prevent tracking on these public channels, devices may use a periodically changing, randomised address instead of their permanent Media Access Control (MAC) address,” researchers Johannes K. Becker, David Li, and David Starobinski explain in their paper, Tracking Anonymised Bluetooth Devices. “In this work we show that many state-of-the-art devices which are implementing such anonymization measures are vulnerable to passive tracking that extends well beyond their address randomisation cycles.

“We show that it is possible to extract identifying tokens from the payload of advertising messages for tracking purposes. We present an address carry-over algorithm which exploits the asynchronous nature of payload and address changes to achieve tracking beyond the address randomization of a device. We furthermore identify an identity-exposing attack via a device accessory that allows permanent,non-continuous tracking, as well as an iOS side-channel which allows insights into user activity. Finally, we provide countermeasures against the presented algorithm and other privacy flaws in BLE advertising.”

“The Signal ID Wiki (sigidwiki) is our sister site that we started a few years ago as a way to collect and catalogue various types of signals that an SDR user might see and hear on the airwaves,” the announcement explains. “The idea is that a user could search the database to learn about and identify unknown signals. Over time it has grown significantly, with now almost 400 known signals with both waterfall images and sound samples available in the database.

“Artemis is an open source Windows/Linux/MacOS compatible application initially programmed by Marco Dalla Tiezza. It brings the sigidwiki website into an offline searchable database with an easy to use UI. Today version 3.0 was released to the public. The new version has been completely rewritten from scratch in Python, as the previous versions were written in BASIC (a now abandoned programming language). The new version has an improved UI, and paves the path for future improvements.”

The latest version or Artemis is available to download now from Ares Valley.

“One of the things I’ve most enjoyed about building my career in software radio is the opportunity to meet so many amazing people working on so many different things,” Ben explains of the inspiration behind the project. “Software radio represents the intersection of many fields of science, engineering, and design, and it enables an incredible array of applications and technology.

“Guests [on the podcast] can be representatives from industry, academia, government, or hobbyists. The goal of this podcast is to discuss technical topics, but at a level that doesn’t require expert or esoteric knowledge to follow the conversation. Every show should be both accessible and fascinating, regardless of your level of experience. This isn’t a tutorial or ‘how-to’ podcast, but every episode should provide an opportunity to learn about something exciting and impactful.”

The first two episodes of the podcast are available now: an interview with SignalsEverywhere creator Harold Giddings, and an interview with Xilinx’ Manuel Uhm on the company’s new Versal family of products. Future episodes will be uploaded to the official website when available.