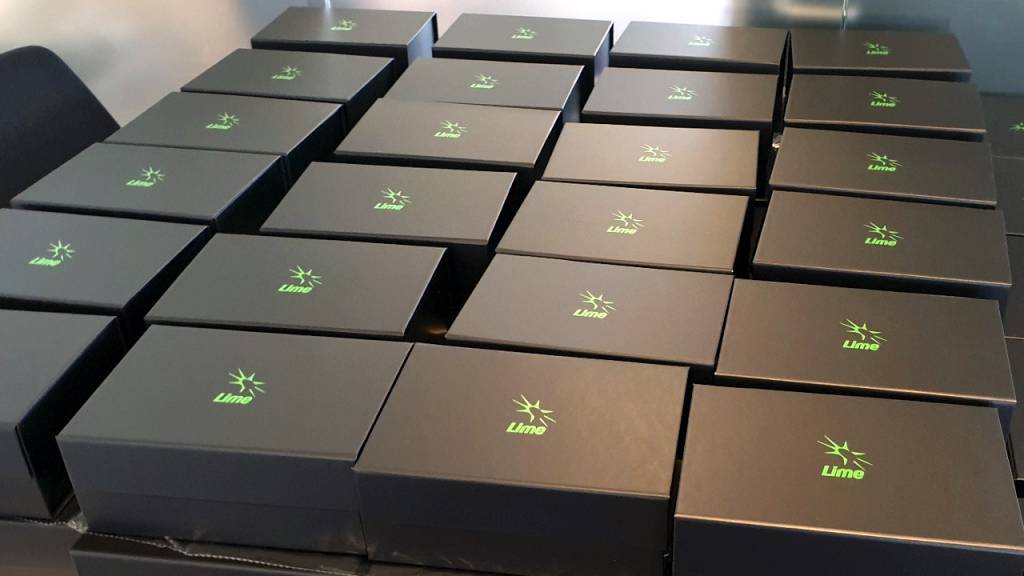 Lime Micro has announced that the first batch of LimeRFE boards has now been shipped to Crowd Supply, with all backers’ orders expected to be fulfilled by the end of June.

Designed to bring the same flexibility as the LimeSDR range to the radio-frequency front-end field, the programmable LimeRFE promises to give any LimeSDR project a stronger, clearer signal for transmission, reduced noise for reception, and improved range for both.

Now, after a last delay driven by the COVID-19 pandemic, the boards are shipping to backers. Earlier this month the first 50 fully-assembled and improved boards were sent to Crowd Supply for distribution, with the remainder expected to arrive with backers by the end of June.

As well as the LimeRFE, each package includes an acrylic case, a ribbon cable for connection to a LimeSDR or LimeNET Micro, and two 50R SMA terminations for unused ports. The box, meanwhile, includes a schematic of the LimeRFE in the lid.

Backers and other interested parties can read more on the Crowd Supply campaign page, while order status updates can be found on your Crowd Supply account page.

LibreCellular has launched, a MyriadRF project designed to provide a fully-tested and validated hardware and software stack for 4G Long Term Evolution (LTE) networking – complete with an open test methodology.

The project is based around existing open-source and open-hardware efforts including srsRAN (formerly srsLTE) and Open5GS, OsmoGSMTester, the LimeSDR family, and LimeRFE, and will include a fully-tested configuration alongside all necessary tooling and documentation required to get up and running with your own LibreCellular 4G network.

More details on the project are available on the LibreCellular website.

The Telecom Infra Project (TIP) has officially launched OpenWiFi Release 1.0, which it describes as “an industry movement for unlocking Wi-Fi infrastructure for the next decade.”

“Wi-Fi is delivering high-quality connectivity that the world so desperately needs, and provides critical telecom infrastructure necessary for daily activities, telework, and other important services in rural and underserved areas,” adds Susan Silveira, Wi-Fi Alliance director of business development. “The vision of Wi-Fi Alliance to connect everyone and everything, everywhere complements the mission of the Telecom Infra Project (TIP), and Wi-Fi Alliance is proud to deliver foundational technologies and programs to ensure Wi-Fi provides an interoperable and secure experience so that initiatives like TIP OpenWiFi can continue to innovate for years to come.”

More details are available on the OpenWiFi section of the TIP website. The project also ties in with the Wireless Broadband Alliance’s OpenRoaming initiative, launched last year.

The next batch of LimeSDR Mini boards has come off the production line and has shipped out to Crowd Supply.

The latest update notes, “We unfortunately experienced further manufacturing delays, due to supply chain issues regarding component allocation and the current industry-wide silicon shortages. However, we are now pleased to report that the next batch of 1,200 LimeSDR Mini boards is coming off the production line and will be shipped to Crowd Supply next Tuesday, 25th May”.

“Welcome to the very interesting world of aviation data,” Rob says in the introduction to his latest video. “ACARS stands for Aircraft Communications Addressing and Reporting System, and is basically a form of SMS or text-messaging for the aviation industry. ACARS messages are transmitted via VHF, satellite, and HF, also known as shortwave.”

Rob’s video concentrates on receiving and decoding standard ACARS messaging on the VHF band, using a software-defined radio and a selection of free or low-cost software – including packages for Linux, macOS, and Windows, some of which are compatible with single-board computers like the Raspberry Pi family.

The video is live now on the Frugal Radio YouTube channel.

MagicSDR aims to make it simple to interact with your software defined radio from your smartphone, including LimeSDR devices paired with the lms_tcp wrapper.

MagicSDR works over the network, communicating with an SDR device hosted on an RTL_TCP-compatible server. Thanks to the work of community member Lucas Teske, that includes LimeSDR-hardware: unveiled earlier this year, lms_tcp acts as a wrapper between the LimeSDR device and any software compatible with RTL_TCP – including MagicSDR.

More information on MagicSDR is available on the official website; those looking to try it out with a LimeSDR will need lms_tcp from Lucas’ GitHub repository.

“I built a shortwave radio receiver from scratch using only cheap and easily available components, i.e. standard transistors, op-amps and 74xx logic chips,” Michael explains of his project. “No typical radio parts – no coils, no variable capacitors, no exotic diodes. This project is easy to build and gives you a hands-on experience with radio technology which you won’t get from a fully integrated SDR [Software-Defined Radio].”

Based on the concept of a heterodyne receiver, but with the radio-frequency mixer replaced with a 74HC4051 analogue multiplexer, the local oscillator replaced with a 74HC4046 phase-locked loop (PLL), and two custom op-amp circuits for filtering and amplification plus demodulation, the receiver is fully functional – and also the basis of an unusual guitar effects pedal.

Full details, including schematics, are available on Michael’s website.

The CENOS antenna modelling and simulation package has now left beta, launching as a subscription-based service with prices starting at €20 a month for individuals.

“Two years ago we launched a specialized induction heating simulation software to cover the growing demand in the SME sector – smaller equipment manufacturers, tooling shops, and production plants,” says company co-founder Dr. Mihails Scepanskis. “Following the success in the low-frequency applications, we decided to move to the microwaves with the same mission – to democratise the simulation software, make it accessible for every engineer.

“I believe, it is an awkward situation in the market – engineers have to choose either to pay tons of money for enterprise-type generic simulation packages to utilise just a fraction of their functionality or to use over-simplified 1D approximations with the hobbyist-level software. With CENOS we have leveraged the power of open-source algorithms to break the status quo – to deliver a full-functionality FEM software for price-sensitive business users and individuals.”

The freshly-launched CENOS Antenna Design is free to try for 10 days, after which subscribers can sign up starting at €20 per month for an individual-level account with no live engineering support.

More information is available on the official website, along with a link to sign up for the 10-day trial.

For those working on adding compact antennas to a PCB design, meanwhile, Antenova’s launched its own web-based offering: the Antenova Antenna Selection and Placement Tool.

“This tool will help you choose the best SMD antenna for your project, based on your PCB size, technologies and preferred layouts,” the company promises of its new in-browser offering. Choose an antenna for your application. View recommended layouts and export screenshots. Compare antennas based on your PCB size to find the right solution for your application.”

Built for use ahead of the PCB design phase, the tool runs on any modern web browser and is provided free-of-charge – though users are asked to fill in a form detailing their requirements and the status of their project in order to gain access. It also only recommends Antenova’s own antenna designs, for obvious reasons.

Instructions on using the new tool and a link to request access are available on the Antenova blog.

“Commercial calibration kits can cost thousands of dollars, and are precisely machined and individually measured against an even more expensive calibration standard,” James explains. “What if I took a geometric modelling approach to designing home-brew calibration standards? My needs are pretty modest: I have a combination spectrum analyser/single-port VNA that can measure up to 3 GHz. Surface-mount SMA connectors are cheap, and could be terminated to produce a OSL kit. Their dimensional accuracy is not as good as an airline, but better than you can measure on a typical set of calipers.

“Until recently, getting numerical solutions to Maxwell’s equations with arbitrary 3D geometry (known as full-wave electromagnetic simulation) was out-of-reach of amateurs. openEMS, first developed in 2015, is one of the first free and open-source 3D EM field solvers. It is not the easiest thing to learn, since geometry is created by Matlab code, and is limited to combinations of geometric primitives like boxes, cylinders, and spheres. EM field solvers are also notorious for their garbage-in-garbage-out behaviour; if the geometry is slightly off, or is discretized in a bad way, the simulation will still run and give you completely crazy results. Thankfully, openEMS also provides tools to visualize the discretized geometry pre-simulation, and wave propagation during simulation to catch errors.”

James’ full post is available on his website, while the openEMS simulation files and data have been published to GitHub under the permissive Apache 2.0 licence.

Deutsche Telekom, Orange, Telefónica, Telecom Italia (TIM), and Vodafone are all working under a Memorandum of Understanding (MoU) in which they hope to begin large-scale deployments of open RAN technologies in 2022. Ahead of that, a joint white paper details their technical requirements – outlining “essential requirements for implementation by suppliers.”

The resulting paper describes large-scale macro deployment as “the primary target” for the operators, in both centralised and distributed virtualised RAN (vRAN) topologies and with small-cell use both indoors and outdoors. RAN sharing, in which one operator’s customers can use the network of another, is highlighted as a kit requirement, while the focus is on 4G and 5G cellular networks – legacy support for 2G and 3G devices being pushed off onto proprietary interfaces “since no open interface has been specified successfully.”

Other requirements detailed in the document include support for automation through the Service Management and Orchestration (SMO) framework, energy efficiency from the radios through to the entire infrastructure, security, and high availability.

The a summary of the document is available to download as a PDF from Orange.

Finally, researchers at the National University of Singapore have published a paper detailing a successful project to harvest enough energy from ambient 2.4GHz Wi-Fi signals to drive small electronics.

“We are surrounded by Wi-Fi signals, but when we are not using them to access the Internet, they are inactive, and this is a huge waste,” claims project lead Professor Yang Hyunsoo. “Our latest result is a step towards turning readily-available 2.4GHz radio waves into a green source of energy, hence reducing the need for batteries to power electronics that we use regularly.

“In this way, small electric gadgets and sensors can be powered wirelessly by using radio frequency waves as part of the Internet of Things. With the advent of smart homes and cities, our work could give rise to energy-efficient applications in communication, computing, and neuromorphic systems.”

The team’s approach uses an array of eight spin-torque oscillators (STOs) which capture and convert 2.4GHz radio signals to a direct voltage – enough to either directly light a 1.6V LED or to charge a capacitor, allowing the LED to run for a minute based on only five seconds of captured energy.

The team’s work has been published under open-access terms in the journal Nature.