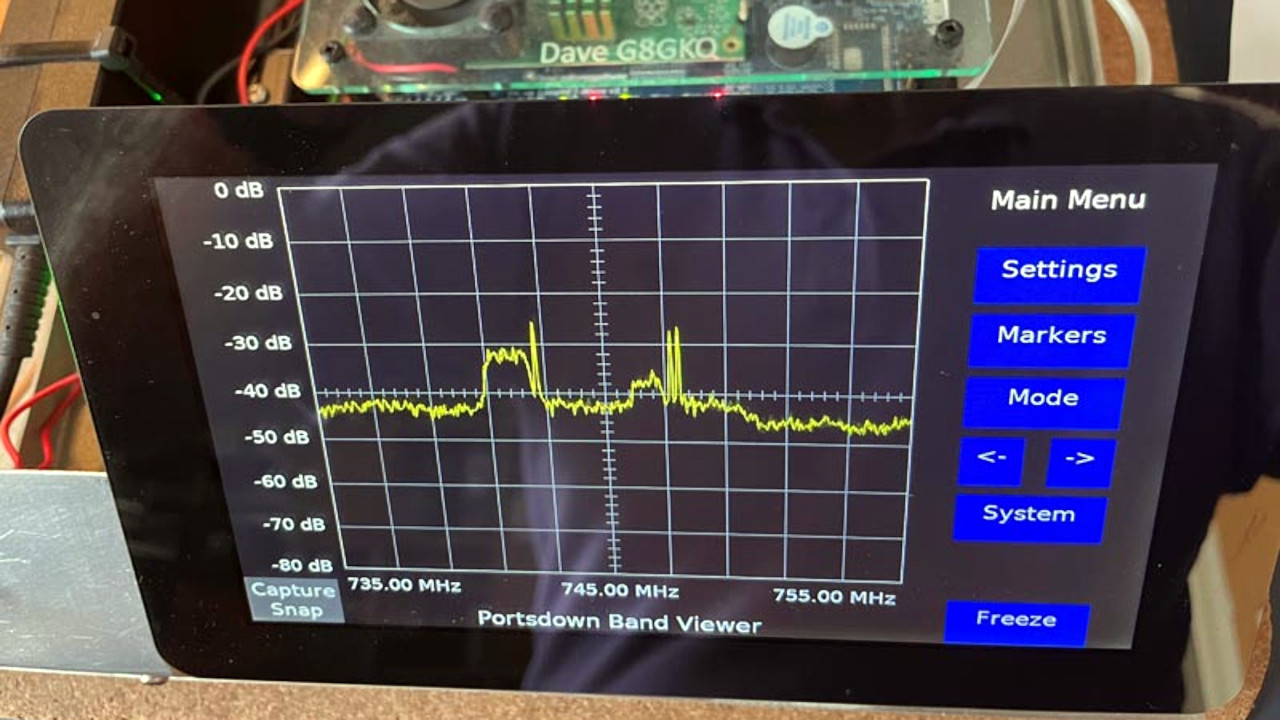 Radio amateur Rob Swinbank has written of a project to help filter out an annoying 6m noise source, using a LimeSDR board and GNU Radio to remove the noise and provide a cleaner signal.

“Got a another small Yagi pointing at my 6m noise source and can now cancel it out using the LimeSDR inputs and GNU Radio,” Rob writes in a Twitter thread demonstrating the technique, “then back out to the radio. The trick is to get noise signal above what you see on the main antenna. [I] have had more success on 6m than i had when i tried on 2m a few months back, but the noise is less broad on 6m.”

Rob has shared the GNU Radio graph file, dubbed LimeNoiseCancel.grc, for others to try the same technique. Full details, and a link to download the GRC file, are available on Rob’s Twitter thread.

Designed to make amateur digital TV transmission as simple as possible for those used to analogue transmission, the Portsdown platform is based on a LimeSDR Mini connected to a Raspberry Pi single-board computer. In constant development, its latest release brings new functionality to help map out spectrum usage and hone-in on weaker signals.

“The Band Viewer software is included with the Portsdown 4 and Portsdown 2020 and can be used to provide a basic spectrum display of band occupancy using the receive section of a LimeSDR Mini or LimeNET Micro,” the BATC’s documentation explains. “Thanks to Phil M0DNY for the LimeSDR FFT [Fast Fourier Transform] code, and to Michel HB9DUG for encouraging the development.”

More details on the Band Viewer are available on the BATC wiki, along with links to both Portsdown releases; a community case study investigating the Portsdown system as a whole can be found on the Lime Micro website.

Harald Welte has presented on pySim-shell at OsmoDevCall, showcasing what he describes as a “next-generation SIM configuration tool” with full scripting support.

“pySim-shell is an interactive, scriptable command-line environment for exploring, editing and configuring SIM/USIM/ISIM cards,” Harald explains of the tool he has written for integration into the pySim subproject of the Osmocom open-source telecommunications suite. “Why would you want to program your own SIM cards? Because you want to operate your own cellular network. 2G can use random third-party cards, but it’s not really convenient in most cases; anything greater than or equal to 3G requires you to know the card-specific secret keys. In reality, that translates to having your own programmable SIM cards.

“What to do about the [pySim] user interface? GUIs [Graphical User Interfaces] are bad: they are not really scriptable or automisable. GUIs are hard to make portable, test automatically, etc. People setting up FOSS [Free and Open Source Software] cellular programs most likely use [shells] on a daily basis, so they are familiar with the concept of interactive cells/CLIs [Command Line Interfaces]. So, let’s do a CLI/shell/REPL [read-evaluate-print loop]!”

The full 50-minute video is available on the Osmocom website now, while pySim-shell is available in the latest pySim sources on GitHub under the reciprocal GNU General Public Licence 2.

The US National Institute of Standards and Technology (NIST) has announced it has built and tested a software-defined radio system designed to bridge the gap between analogue radio and modern digital broadband systems.

“This NIST project aims to develop a prototype infrastructure that could be used by commercial entities to create a low-cost solution for public safety users, allowing them to interconnect their radio systems to broadband networks,” claims NIST engineer Jordan O’Dell of his team’s work. “There isn’t a commercial option that compares to what we are developing. The goal here is to create a prototype and accelerate technology development in industry that will fill a significant gap.”

Pseudonymous security researcher Aaron “Cemaxecuter” has published another update to the SDR-focused DragonOS Linux distribution, bringing support for radio-frequency propagation and calculation via the Signal Server package in the latest beta.

“This video is a preview of a new RF Propagation and Calculation feature provided by Signal Server,” Aaron writes in the introduction to a video demonstrating the new functionality. “Additionally, custom web server scripts by Dr. Bill Walker, will also be included in DragonOS Focal R14 in the near future. There’s a lot of moving parts, but once complete, all you ‘should’ have to do is download, convert, and place the SRTM elevation data for the areas needing coverage calculations in the /usr/src/SDF directory.

“Big Thanks to Dr. Bill Walker for sharing his work, helping understand how SPLAT! and Signal Server works, and for taking the time to update the SPLAT! Web-server to the faster multi threaded Signal Server application.”

Based on SPLAT!, signal server offers RF signal propagation, loss, and terrain analysis for frequencies between 20 MHz and 20 GHz based on Shuttle Radar Tomography Mission (SRTM) data files. The video is live now on Aaaron’s YouTube channel, while DragonOS Focal can be found on SourceForge.

Engineer Jankae Kaeberich has published an updated version of his open-hardware vector network analyser (VNA), LibreVNA, which acts as a hardware front-end for a software application running on a PC.

“The PCB is really only the RF frontend with some processing power,” Jankae explains of the project’s design. “Everything else is handled in the PC application once the data is transferred via USB. You can try out the application without the PCB (obviously no measurements are possible, but you can import provided example measurements and get an idea about what it can and can’t do).”

The LibreVNA project aims to cover 100 kHz to 6 GHz with harmonic mixing up to 8 GHz, 10 kHz to 50 kHz IF bandwidth supporting 10k points per second acquisition speed, and includes a spectrum analyser offering 13 Hz to 112 kHz resolution bandwidth and -103 dBc/Hz phase noise at 1GHz with a 10kHz offset. These specifications may, however, change as the project progresses through development.

More information on the LibreVNA and full source files for both the hardware and software can be found on the project’s GitHub repository under the reciprocal GNU General Public Licence 3.

AMSAT, the Radio Amateur Satellite Corporation, has announced that the first satellite in its Greater Orbit, Larger Footprint (GOLF) programme has been manifested for launch aboard ELaNa-46.

“The goal of the GOLF program is to work by steps through a series of increasingly capable spacecraft to learn to develop systems and skills needed to achieve successful high orbit missions,” AMSAT explains. “Among these are active attitude control and the ability to command attitude changes, deployable/steerable solar panels, radiation tolerance for commercial off the shelf (COTS) components in higher orbits, and propulsion. The eventual goal of the GOLF program is a satellite in Highly Elliptical Orbit (HEO) similar to AO-10, AO-13, and AO-40, but at a currently affordable cost combined with significantly enhanced capabilities, which in turn will allow the use of much less complex ground stations.

More details on the project can be found on the AMSAT website, where donations are being solicited to fund the project’s further development and deployment.

SpaceX has begun encrypting the downlink signals from its on-board camera systems, after radio amateurs had succeeded in capturing video transmissions from Falcon 9 and other missions.

With considerable interest in the company’s promise of relatively-low-cost reusable space launch hardware, and the occasional video feed getting cut out just when things start to get interesting, there’s no surprise that radio amateurs and space enthusiasts have shown interest in capturing the downlink transmissions from SpaceX’s launch vehicles. Sadly, early successes have led to the company encrypting its data – making the captures useless.

The issue was first noted on the /r/AmateurSatellites sub-Reddit, with user “derekcz” noting that “while I can see why SpaceX have done this, I personally do not agree with their decision. I was genuinely expecting them or [Elon] Musk to embrace these amateur decoding efforts as a very cheap and effortless way for them to at least partially regain ‘respect’ after their complete disregard of the astronomy community, however this has shown the opposite.”

While no official statement has been made by the company, SpaceX flight software engineer Stephen Barrett confirmed the encryption on Twitter with a brief message: “Sorry guys.”

“Changing the geometry of an antenna will change its performance,” Assistant Professor Huanyu “Larry” Cheng explains of the problems faced by the team in the quest to develop a functional antenna which could operate while being twisted, compressed, and/or stretched. “We wanted to target a geometric structure that would allow for movement while leaving the transmitting frequency unchanged.

“We’ve demonstrated robust wireless communication in a stretchable transmitter. To our knowledge, this is the first wearable antenna that exhibits almost completely unchanged resonance frequency over a relatively large range of stretching. We are really excited that this research could one day lead to networks of sensors and transmitters worn on the body, all communicating with each other and external devices. What we’re imagining is science fiction at the moment, but we are working to make it happen.”

The team’s work has been published under open-access terms in the journal Materials & Design.