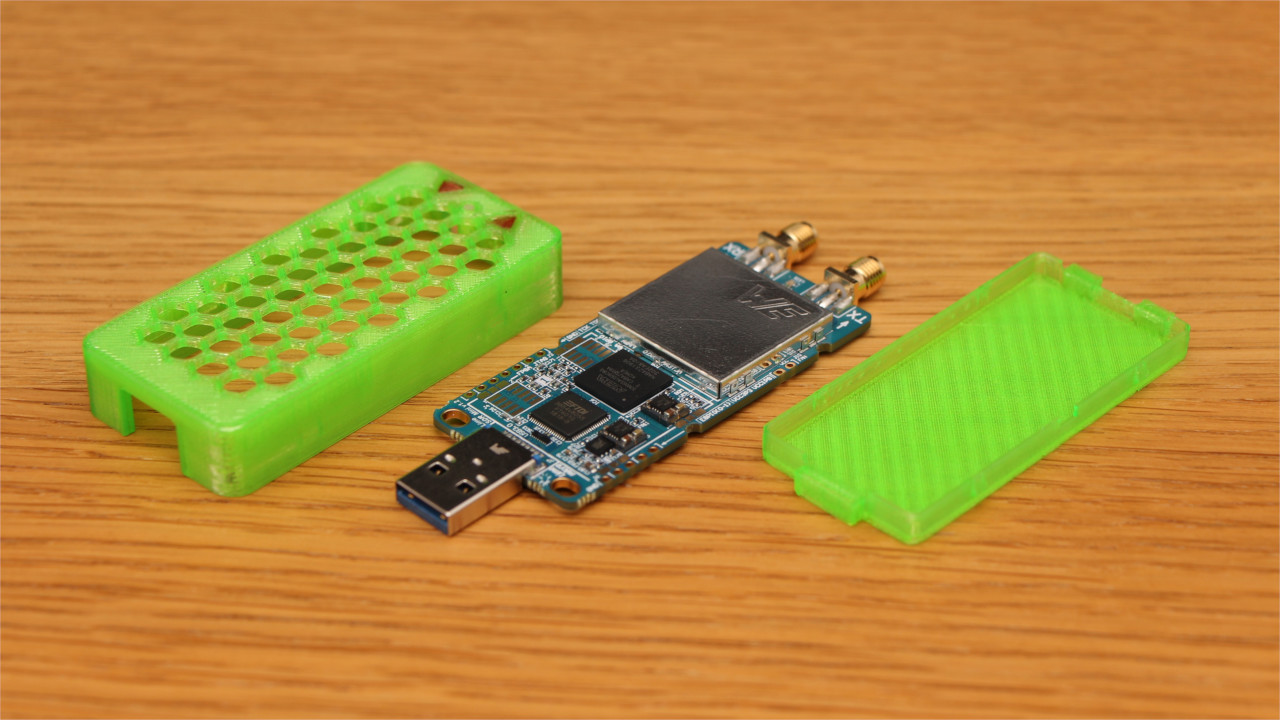 While most users of the LimeSDR focus on its LMS7002M radio frequency integrated circuit (RFIC), naturally enough, there’s flexibility to be found also in its field-programmable gate array (FPGA) – as proven by Gaspar Karm’s project to add a DC-removal filter into the board’s gateware.

As the name suggests, a field-programmable gate array can be programmed in the field – which is to say, at will. The FPGA on the LimeSDR arrives programmed to provide a standard set of functionality, but it’s possible to modify the FPGA to add support for additional new functionality – aided by the release of the gateware under an open source licence permitting modification. Gaspar took this gateware and added an impressive new feature: a DC removal filter, requiring no physical modification to the board or additional hardware.

“[The] algorithm is based on the Dual-MA (2048 points) filter,” Gaspar explains in a forum post. “Hopefully this is also interesting for people at Lime, so maybe we can find a way to get it into the master branch” – a move which which would, if it proves possible without losing any existing functionality, make the feature available as a standard part of the LimeSDR’s gateware.

Gaspar’s modified gateware, which at present requires a custom build of LimeSuite to support the modification, is available on his GitHub repository under the Apache Licence 2.0, while instructions for its use and demonstration animations can be found in his forum post.

Gaspar is also behind another new feature for the LimeSDR Mini’s FPGA: a hardware-accelerated real-time spectrogram, with a view to making it significantly more usable on relatively underpowered hardware including Arm-based single-board computers (SBCs).

While real-time spectrogram displays are incredibly useful tools, they require considerable processing power. Although well within the reach of a modern desktop computer, lower-power devices like single-board computers, tablets, and smartphones can struggle – and with the LimeSDR Mini being well suited to use with such portable devices, Gaspar came up with a solution. “Average-pooling reduces the noise of the spectrogram and downsamples the output data rate,” he explains. “[This is] potentially usable on Arm devices.”

There is a side-effect, however: using the FPGA as an accelerator is extremely effective, but increases the operating temperature of the LimeSDR Mini considerably over standard gateware operation. As a result, Gaspar mandates the use of a large heatsink attached to the entirety of the LimeSDR Mini using a non-conductive thermal pad to dissipate the additional heat effectively.

For those looking for a little protection for their LimeSDR Mini, forum user Rikard Lindström has shared a permissively-licensed design suitable for home or professional 3D printing.

“I got an LimeSDR Mini early this week, and the first thing I did was to print a case, but it wasn’t quite as durable as I wanted,” Rikard explains. “So I decided to design my own – I wanted one without screws. Features: screw-less design; honeycomb vent on top; hole over led for a bit of clear filament as light pipe; recessed arrows next to antenna connectors to indicate TX and RX.”

Designed using the OnShape software, Rikard’s case design has been uploaded to Thingiverse under a permissive Creative Commons Attribution Share-Alike licence, from where the files can be download for home printing or print-on-demand parts ordered for those without access to 3D printing facilities locally.

The MarconISSta project, which has put a LimeSDR on board the International Space Station as a means of mapping global radio spectrum usage and discovering new ways to support the coexistence of amateur and professional satellite communications operations, continues to receive data – and work progresses on a micro-satellite variant, too.

Following the successful installation of the LimeSDR-based MarconISSta hardware on board the International Space Station, where it was integrated with the Amateur Radio on the International Space Station (ARISS) antenna array and the Astro Pi single-board computer platform, and a first week’s data reception detailed in an earlier OTA, the MarconISSta project did encounter a small hiccup: a scheduled power-off of the Columbus module resulted in a failure to reboot the system, losing some of the second week and all of the third week’s reception data.

Thankfully, the issue was resolved and data continues to flow for week four onwards. “Almost the complete measurements of week 04 were taken in the L band,” the team explain in a project update. “This gave us the opportunity to test the 2D heatmap visualisation. There are already some interesting things to be seen, like the different use of these two frequencies (little use of 1263.5 MHz in Africa compared to 1264 MHz).”

The team is also working on Spectrum Analysis of LEO Satellite Allocations (SALSA), a related project which uses the open LimeSDR design to create a variant suitable for deployment on micro-satellite “cubesat” systems – meaning it will be possible to map the Earth’s radio frequency spectrum from multiple orbits. Forum-goers are also getting involved, with Djani ‘9A4DB’ Bodlovic posting of his own experiments to support the project.

More information on MarconISSta can be found on the Lime Micro case study, while the latest project updates are available on the official blog.

Still on the ISS, satellite communication enthusiasts are being asked to dig into their pockets to raise funds for Amateur Satellite (AMSAT) and Amateur Radio on the International Space Station (ARISS) as part of a crowdfunding campaign to upgrade the amateur radio infrastructure on the space station.

“ARISS is in critical need of an infrastructure update to ensure that programs like students talking to astronauts in space via amateur radio can continue,” the organisation explains of its crowdfunding drive. “Through your donations ARISS seeks the following upgrades: next Generation radio system [which] will support easier radio mode transition, to enable new, exciting capabilities for hams, students and the general public including; new multi-voltage power supply [which] will support present and future radio capabilities and allow wireless experiments to be conducted; [and] ARISS needs to build 10 Next Generation Radio Systems to support our development, on-orbit operations, training and long-term maintenance.”

To fund these, the group is seeking $150,000 in US tax-deductible donations between now and the end of next year. Those donating at certain levels will also receive physical rewards: $100 gets an ARISS challenge coin; $250 a challenge coin, pin, and T-shirt; $500 all of the aforementioned plus their name and callsign stored on an SD card loaded into the ARISS power supply on board the ISS; $1,000 all of the aforementioned plus a mounted power supply circuit board; and still higher levels with yet more swag.

More information on the campaign, as well as the link to donate, can be found on the official crowdfunding page.

Low-power computing specialist Arm has announced the release of an open-source Bluetooth Low Energy stack based on Bluetooth 5 for its Mbed operating system: the Mbed Cordio Stack.

“For silicon partners, the solution gives them access to a full-featured, production-ready Bluetooth 5 stack as part of their Mbed OS offering and the ability to port to additional platforms. Having complete open source access to the stack, removes the risk of relying on a stack vendor, and allows them to meet changing requirements where full source code availability is critical.”

More information on Mbed Cordio is available on the official website, with the BLE stack available now and Bluetooth Mesh available early next year.

Researchers at Philadelphia’s Drexel University have published a paper detailing “spray-on” antennas, made from a transparent layer of titanium carbide and aimed at Internet of Things (IoT) and wearable devices which require small, light, unobtrusive, and flexible antennas.

Speaking to IEEE Spectrum, Drexel University student Asia Saycheva explains that the ultra-thin antenna design is based on MXenes – titanium metal bonded with carbides and dissolved in water then applied using an off-the-shelf spray gun.

The team claims its work breaks through the issue of skin depth – whereby too-thin layers of metal cease working as an antenna – with a thickness of 100nm proving to form a functional antenna, compared with 100 microns, or six orders of magnitude thicker, for a traditional MXene layer. The result is antennas which are so thin as to be effectively transparent, flexible, and which can be rapidly and cheaply produced in a range of shapes and sizes.

“I began thinking about practical alternatives for high-frequency circuits that can provide maker-friendly prototypes that are fast to build, and easy to probe and alter,” Robert writes. “I should say that I make no claims of originality: Indeed I employ some oft-forgotten, decades-old techniques, but they turn out to be surprisingly useful in an age of surface-mount components operating at gigahertz frequencies.

“The results of these methods are not always the prettiest-looking boards, but I’ve had good success in using these techniques to prototype microwave circuits.”

Robert’s article can be found in the October 2018 print issue of IEEE Spectrum, or viewed on the website.

RTL-SDR has highlighted a novel design for a 3D-printable ultra-wideband antenna covering 900 MHz to 11 GHz, created by Professor John Jackson.

Based on existing discone and sphere antenna designs, John’s creation is a mixture of the two – described in RTL-SDR’s write-up as “a sort of ice-cream with cone looking shape.” Interestingly, the majority of the design is 3D printable: aside from an off-the-shelf metal dish turned on its back as a base, the antenna’s top hemisphere, cone, radome, and supporting structure are all 3D printable – the hemisphere and cone in brass on a metal 3D printer, and the radome and supporting structure in plastic on a more traditional 3D printer.

A full write-up of the design and its construction, which John has found is usable from 900 MHz to 11 GHz, can be found on the JR Magnetics website.

Finally, the Radio Society of Great Britain (RGSB) and National Hamfest Lincoln Limited are running the UK’s National Hamfest radio rally this weekend, and it’s a very special one: the event’s 10th anniversary at its current venue.

Taking place on the 28th and 29th of September at the Newark and Nottinghamshire Showground, the rally boasts a wealth of attractions including a flea market, bring and buy stand, National Club of the Year trophy presentations, along with a raffle celebrating the event’s decade-long run.

Full details can be found on the official website.