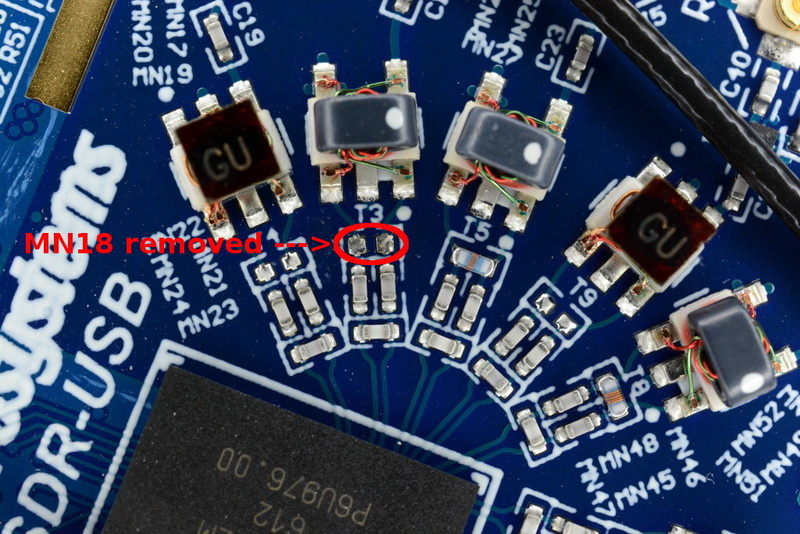 Users around the globe have begun experimenting with the LimeSDR v1.4 hardware, and in doing so have discovered both an issue with its reception of high-frequency (HF) bands and a fix for same – and if you’re still waiting for your own LimeSDR, you’ve got until February 21 to decide whether you want a HF-modified unit shipped out.

As explained by Danny Webster earlier this week, the LimeSDR’s matching network – identically designed on both channels – is at its peak performance for frequencies around 700 to 900MHz, and offers reasonable performance down to around 400MHz. As a consequence of its optimisation, however, it performs relatively poorly in the HF band, as detailed on the official wiki. For those who need better HF performance a number of solutions have been found, and one suggested by forum user “sdr_research” has proven the simplest: removing an inductor from the first transceiver channel, a process that requires a soldering iron and a couple of minutes.

Those who have LimeSDR hardware in-hand have reported great improvement in HF reception following the modification, but for those who have not yet received a LimeSDR there’s a decision to make: as explained in the most recent update on Crowd Supply, those still in the shipping queue have until February 21 to decide whether to receive the stock hardware with matching network optimised for >900MHz use or a pre-modified version fixed for improved sub-900MHz reception. Full details are available from the project survey.

Progress on the LimeSuite software, meanwhile, continues to progress nicely. The promised LimeSuite 17.01.1 stable release launched earlier this month, and 17.02.0 is pending with improvements including automatic phase configuration and better handling of multiple-input multiple-output (MIMO) configurations.

Changes entered for LimeSuite 17.02.0 include automatic phase configuration for DIQ clocks, fixes for fast Fourier transform (FFT) amplitudes when using MIMO configurations, a receive gain control with decibel value, several bug fixes, and improvements in device handle display and labelling to make the software easier to use. As always, anyone wanting to experiment with the very latest version of the software can use the Master branch, while the Stable branch is recommended for general use.

Whether you have your LimeSDR or not, if you’re near London, England on March 24 you can attend a hands-on introduction to the hardware and software at the British Computer Society (BCS) with free entry.

Run by Danny Webster, the event includes an introduction to the LimeSDR hardware and LimeSuite software, followed by a hands-on afternoon which adds GNU Octave and Pothos into the mix. For more advanced users, demonstrations will be made of using the LimeSDR in more complex projects including a functional 4G femtocell.

Entry is free whether or not you’re a BCS member, with lunch provided, and the booking link is live through to March 22nd.

If you like customising your hardware, the Tysonpower blog has posted a build of a low-cost yet highly attractive Yagi-style antenna designed for high-efficiency reception at the desired frequency while offering an extremely low weight – and at a cost of just €20 in parts ($21/£17).

Adjustable for different frequencies depending on the length, the Tysonpower design includes 3D printed parts for stability and carbon fibre piping to reduce weight and decrease flex. Using a version targeted at 136MHz for NOAA satellite reception, a signal to noise ratio of 36dB was recorded – and from a build which its creator claims took just a few hours and uses low-cost welding rods as the reception elements. As an added bonus, and particularly for those whose target frequencies require longer elements, the design can be folded in half for transportation.

The University of Alaska Fairbanks Geophysical Institute has announced several experiments as part of the High Frequency Active Auroral Research Programme which include theoretically global reception of radio transmissions bounced off the ionosphere.

The HAARP research facility includes a 40-acre grid of towers, and planned experiments using these towers include a study of atmospheric effects on satellite-to-ground communications, optical measurements of artificial airglow, over-the-horizon radar experiments, and an attempt to create an “artificial aurora” which can be photographed by anyone in Alaska during the trial. For radio buffs, though, the bigger news is that the University of Alaska Fairbanks Geophysical Institute is to publish transmission frequencies on the short-wave band for reception almost anywhere in the world.

Those using software defined radio platforms for radioastronomy, meanwhile, may want to take advantage of the release of 1,699 star details from the LCES HIRES/Keck Precision Radial Velocity Exoplanet Survey – including almost 65,000 Doppler velocity measurements and software for analysing same.

“This is an amazing catalogue, and we realised there just aren’t enough of us on the team to be doing as much science as could come out of this dataset,” said Jennifer Burt, a Torres Postdoctoral Fellow in MIT’s Kavli Institute for Astrophysics and Space Research, of the release. “We’re trying to shift toward a more community-oriented idea of how we should do science, so that others can access the data and see something interesting.”

Finally, Dan Englender has released the decode345 project, which includes a flow-graph for GNU Radio and a software decoder for receiving and processing data from Honeywell-protocol home automation hardware in order to integrate it into alternative platforms such as OpenHAB.

In the project’s extensive write-up, Dan goes into detail about the capture of the RF transmissions using a low-cost software defined radio, signal identification and decoding, and then the conversion of the bitstream into a bytestream that could be analysed to get a handle on the undocumented Honeywell protocol itself. Even if you have no plans to get into home automation reverse engineering yourself, it’s a great read for an introduction to many SDR concepts and tricks.