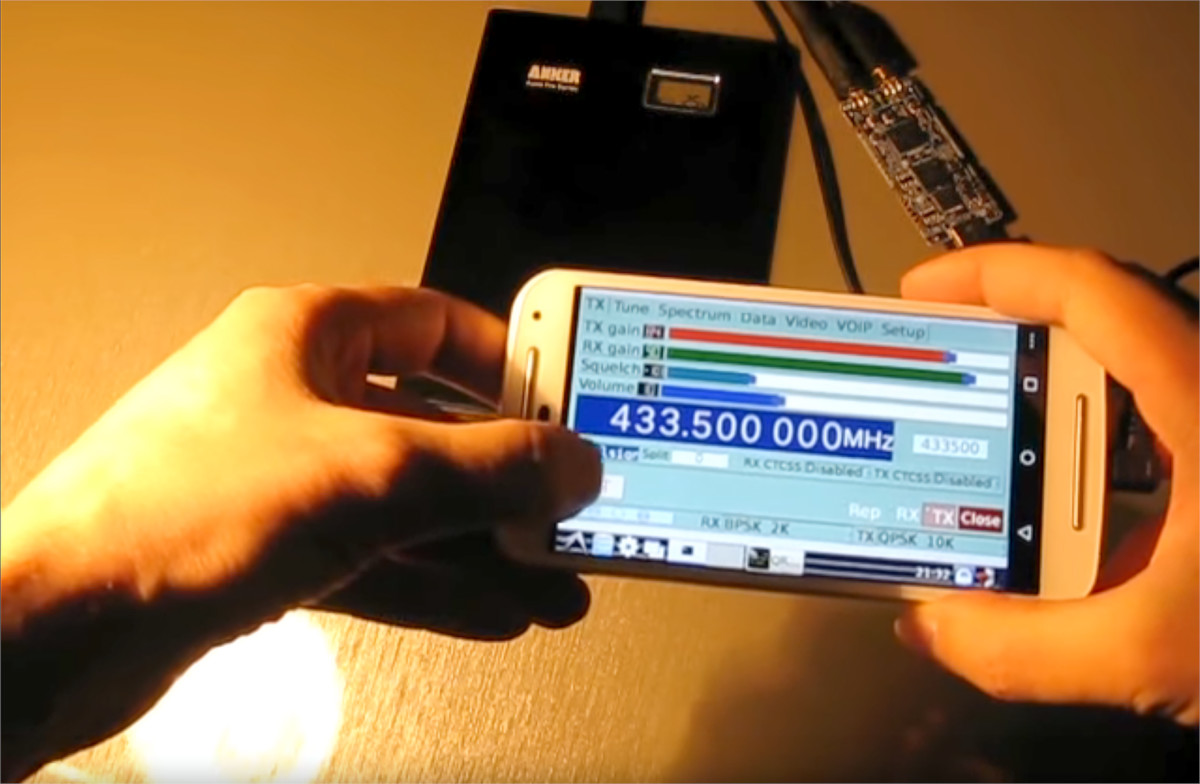 QRadioLink developer Adrian Musceac has shown off how the LimeSDR Mini can be connected to a smartphone for on-the-go software-defined radio reception and transmission, in the latest demonstration update to the Crowd Supply campaign.

Using the GNU Radio-based QRadioLink running on an Android smartphone, a USB battery pack, and a USB On-The-Go (OTG) adaptor cable, Adrian shows how the compact LimeSDR Mini can be used portably. During the video demonstration, which is also available on YouTube, Adrian shows the LimeSDR Mini receiving broadcast and narrowband FM, Codec2 and Opus digital amateur, and single sideband (SSB) modulated signals, as well as transmitting a digital voice signal from the smartphone’s built-in microphone.

Mass production of the LimeSDR Mini, meanwhile, is under way following a slight schedule slip for the delivery of parts and full testing. A small initial batch will be produced to ensure the production process is working as it should followed by full-scale production and the delivery of the radios to campaign backers.

Over in the forums Marty Wittrock has been playing with a LimeSDR Mini and an Android smartphone too, using rooting the handset and installing a fully-fledged version of Ubuntu Linux.

“Over the past couple of days, I’ve taken to rooting an LG G3 smartphone and installing Ubuntu Xenial (16.10) OS on that Android phone. After that, I loaded all the dependencies for LimeSuite along with the app itself,” Marty explains of his experiment. “After successfully compiling the LimeSuite application in the terminal, I connected an OTG cable to my LG G3 phone and then connected the LimeSDR-Mini to that. Once I saw that the LimeSDR-Mini was powered, I launched the LimeSuite app and began to check if the app could see the ‘Mini. It did.

“The much longer game plan is to get this all working as an Android APK and not have to do any rooting on phones at all. But for the purpose of investigation and feasibility, this platform will serve that purpose to ensure no time is wasted.”

Radio Physics and Electronics has published a video explaining the mathematics behind amplitude modulation and SSB, demonstrating the concepts using a fast Fourier transform (FFT) display.

Designed for those with some radio experience looking to dive into the inner workings of amplitude modulation and single sideband (SSB), the 20 minute video combines hand-drawn explanations with real-world signals plotted as a fast Fourier transform on a digital oscilloscope. The video is number 57 in a series which has included a look at commercial off-the-shelf receivers, breadboard builds of passive and active resistor-capacitor (RC) filters, and the restoration of vintage equipment including an Emerson tube radio.

The UK Space Agency has announced the launch of the SatelLife Challenge Year Two, which aims to interest people aged 11 through 22 in satellite communication technologies.

“Satellites are shaping our society and increasingly important for our economy. Every second they send information around the world, keep shipping lanes and flight paths clear and help us get to where we want to be,” explains Science Minister Jo Johnson of the initiative. “Young people today will be an integral part of our mission to grow the UK’s share of the global space market to 10 percent by 2030, as set out in our industrial strategy. We need to ensure the potential benefits of space are felt across the whole economy and encourage young British entrepreneurs to develop ideas that rival the best in the world.”

IEEE Spectrum has gathered together details of all the companies looking to trial 5G cellular services during the Winter Olympics, held in South Korea’s Pyeongchang this February.

“It’s understandable why they’re all jumping on this bandwagon,” writes Ariel Bleicher of organisations including KT Corp, SK Telecom, LG U+, and the European Union using the Winter Olympics as a proving and promotional ground for their respective 5G network technologies. “After all, there’s no bigger stage for showcasing the possibilities of a new technology than the Olympics.”

Some contributors to the article, however, warn that the results may be disappointing, with former US Federal Communications Commission (FCC) adviser Henning Schulzrinne warning that “at best what will be demonstrated are some early lab prototypes that will look roughly similar to what 5G standards will eventually incorporate.”

Researchers at the Universidad de Alicante (UA) have announced a smartphone app which they claim can transmit a Wi-Fi-based distress beacon which can be picked up and triangulated by a low-cost receiver over several kilometres away, containing the location of the device and a short text message.

“At present, there is no system in the world that uses Wi-Fi signals to geo-locate a smartphone. There are devices that allow you to detect mobile phone signals from a smartphone and pinpoint its location through triangulation, but it costs around €80,000 and requires the use of a helicopter,” claims José Ángel Berná, professor at the UA’s Department of Physics. By contrast, the system he has designed is claimed to cost merely €600 (£534/$724) in volume and connect to an off-the-shelf smartphone.

Tests with the Special Mountain Intervention Rescue Groups (GREIM) of the Guardia Civil, the Maritime Service of the Armed Forces, and Maritime Rescue have indicated the system works at ranges of two to three kilometres.

The US National Institute of Standards and Technology (NIST) has announced work on ‘quantum radio’ technology which is claimed could allow for communication and mapping in currently inaccessible locations, including indoor, underground, and underwater environments where traditional radio signals struggle to propagate.

The researchers’ work relies on boosting the ability to transmit and receive data using very low frequency (VLF) signals. “The big issues with very low-frequency communications, including magnetic radio, is poor receiver sensitivity and extremely limited bandwidth of existing transmitters and receivers. This means the data rate is zilch,” explains NIST project leader Dave Howe. “The best magnetic field sensitivity is obtained using quantum sensors. The increased sensitivity leads in principle to longer communications range. The quantum approach also offers the possibility to get high bandwidth communications like a cellphone has. We need bandwidth to communicate with audio underwater and in other forbidding environments.”

The research project has demonstrated the detection of digitally-modulated magnetic signals using a magnetic-field sensor based on the quantum properties of rubidium atoms. By varying the magnetic field, frequency modulation (FM) is achieved – with the claim that the atomic magnetometers allow for both high sensitivity and high bandwidth.

Amateur radio enthusiast Wolfgang Kiefer has published details of a homebrew antenna analyser build powered by the STM32F7 microcontroller, based on work released by Yury Kuchura.

Wolfgang has indicated that the revised software will be made available via GitHub for others to use once the programming is complete.

Finally, members of the eHam.net forum have been sharing stories of how they got started in amateur radio, with answers ranging from third-generation hams and Boy Scouts through to electronics enthusiasts and search-and-rescue volunteers.

Currently running to four pages, the thread – started by member C. Waite as a means of both sharing origin stories and finding ways for advocates to bring more members into the amateur radio fold – is filled with a wealth of fascinating tales of radio-based introductions, from those who got started as curious children through to those who are still children themselves.