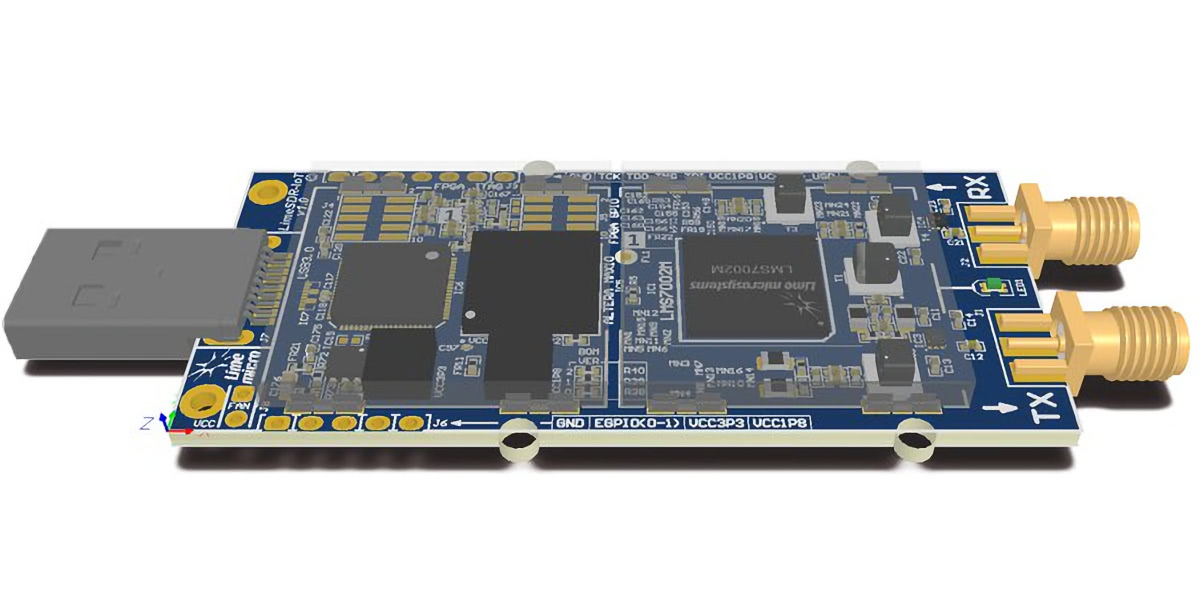 Lime Microsystems has officially opened a crowdfunding campaign for the LimeSDR Mini, a reduced-size and reduced-cost version of the LimeSDR which offers one TX and one RX channel for just $99 for Early Bird backers and $139 thereafter.

Taking place on Crowd Supply over the next month – the same platform used to launch the original LimeSDR – the campaign seeks to raise $100,000 to produce the LimeSDR Mini, but those who already own a LimeSDR needn’t worry about their device becoming obsolete: the LimeSDR Mini is designed as a cut-down version of the full-fat LimeSDR, dropping  from 2×2 MIMO to SISO (single in/single out) in a more compact footprint.

Although based on the same LMS7002M transceiver as its bigger brother, the LimeSDR Mini hits its impressively low price point with some slightly reduced capabilities: as well as half the channels, which drops the available radio frequency bandwidth to 30.72MHz from 61.44MHz and the sample rate accordingly, the board offers a frequency range from 10MHz to 3.5GHz rather than the LimeSDR’s 100kHz to 3.8GHz. The on-board FPGA is also reduced in size, from 40,000 gates on the LimeSDR to 16,000 on the LimeSDR Mini.

The LimeSDR Mini has not, however, cut any corners when it comes to precision and performance. The board can transmit at up to 10dBm frequency-dependent, just like the full-size LimeSDR, and offers an oscillator precision of ±1ppm initially and ±4ppm stably. Better still, it ties in to the existing LimeSDR ecosystem – meaning any applications or projects built around the LimeSDR will work perfectly with the LimeSDR Mini, so long as they don’t need 2×2 MIMO or the extended frequency range.

The LimeSDR Mini campaign is live on Crowd Supply through to the 30th of October, with shipping scheduled to begin at the end of the year.

Earlier this week Karl Woodward posted his fifth entry in the LimeSDR Made Simple series, offering a deeper look at how to control a LimeSDR – or LimeSDR Mini – using GNU Octave.

“MATLAB, and therefore Octave, were originally designed to solve mathematical equations. This makes it ideal for prototyping the software part of SDR to synthesise ‘mixers, filters, amplifiers, modulators/demodulators, detectors, etc.’ in software,” writes Karl in the latest post, introducing the software around which the examples are built. “We need maths and in some cases lots of maths!”

Karl’s GNU Octave example builds an amplitude shift keying (ASK) platform – “a common encoding technique in the simplest of radio devices, with an example being a key fob for your garage door,” he explains.

Papers from the GNU Radio Conference Technical Proceedings (TP) 2017 event have been published to the official website, with a total of 19 papers available to download now.

“The TP is intended to provide a venue for more detailed and longer lasting results publication than what can be conveyed in a 30 minute talk at the conference,” the site explains of the format, introduced for the first time last year. “As a result we adopted the current TP format, which takes the form of a free and open access research paper publication. Speakers may elect to submit a paper to accompany their talk, and people doing good work in the area unable to attend the conference or give a talk may also elect to submit a paper from afar.”

Hackaday contributor Dan Lamoney has begun a series on in-band signalling techniques, starting with dual-tone multifrequency (DTMF) dialling and moving on to coded squelch systems for use via radio.

Although DTMF dialling is of more interest to telephone buffs than radio operators, Dan’s look at squelch signalling is a worthy follow-up of definite interest to SDR fans looking for a little history on the topic. Covering the historical reed-based continuous tone-coded squelch system (CTCSS) and modern digital coded squelch (DCS) systems, the post serves as a great introduction to the topic – if a little light on the technical details.

Researchers from the University of Washington have published a paper on LoRa backscatter experiments (PDF warning) which demonstrated the ability to communicate with ultra-low-cost and low-power backscatter devices in-the-field at ranges up to 2.8 kilometres (around 1.7 miles).

Based on a modified version of the LoRa long-range radio standard enhanced with a chirp spread spectrum (CSS) modulation and mechanism to cancel harmonic interference, the researchers – Vamsi Talla, Mehrdad Hessar, Bryce Kellogg, Ali Najafi, Joshua R. Smith, and Shyamanth Gollakota, all of the Paul G. Allen School of Computer Science and Engineering – describe their paper thus: “This paper overturns this conventional wisdom about backscatter and presents the first wide-area backscatter system. Our design can successfully backscatter from any location between an RF source and receiver, separated by 475m, while being compatible with commodity LoRa hardware. Further, when our backscatter device is co-located with the RF source, the receiver can be as far as 2.8km away.”

The result of the team’s work is impressive: a LoRa backscatter integrated circuit (IC) suitable for use everywhere from smart contact lenses to epidermal patches costing “less than a dime at scale” to produce and consuming only 9.25µW of power – “more than 1000x lower power than LoRa radio chipsets.”

RTL-SDR has brought to our attention a massively open online course (MOOC) introducing SDR basics, based around the RTL-SDR dongle itself but applicable to all SDR hardware in theory.

Run by Juan Moreno and colleagues from the Technical University of Madrid, the English-language course will be based around MATLAB and Simulink and is available to all completely free of charge – though the registration page is in Spanish. In it, Juan promises to cover not only the use of SDR hardware “but also a lot of related areas like antennas, digital signal processing, radio frequency, and communication electronics.”

Another Hackaday post has highlighted the work of radio amateur Jeremy ‘Fuzz’ Hahn to build a Ham Radio Go Box for use in the field.

“Ham Radio Go Box with a Raspberry Pi connected to a 7 inch touchscreen,” Fuzz writes of his project. “Running Ubuntu Mate and Gpredict for satellite tracking and QTCSDR for my USB dongle. BTECH tri-band radio hooked up to a external speaker. Bluetooth speaker hooked up to the Raspberry Pi 3.” An internal 12V battery powers the entire system, and can be charged from a solar panel for extended field use – something Hackaday’s Dan Maloney points out would make it a great tool for emergency communication (EmComm) use in disaster areas.

Demonstrated in a pair of videos posted to Twitter, the build takes advantage of the Android operating system running on the low-cost Kingwear KW88 smartwatch to host and run the Airspy SpyServer client software and allow for monitoring of signals including control via the watch’s touch-screen interface. Therein, of course, lies the trick: the SDR hardware itself, an Airspy HF+, does not connect to the watch itself; instead, it’s connected to a host PC which streams the fast Fourier transform (FFT) and audio data to the watch via a wireless network.