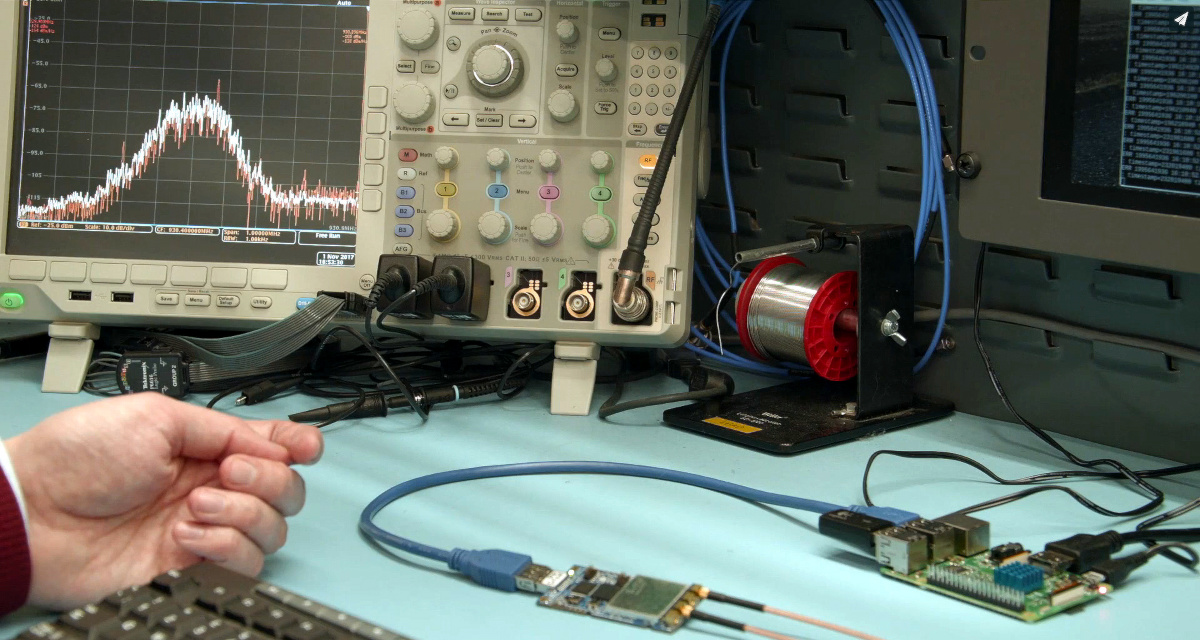 The LimeSDR Mini crowdfunding campaign has come to its close with almost three times its target raised, meaning production is now on-track for the first units to ship to backers by the end of the year.

A post-campaign update from Andrew and the LimeSDR Mini team provides thanks for all those who have backed the project, and the promise of more to come. “We are by no means finished with LimeSDR Mini and LMS8001 Companion demoes,” explains Andrew, “and you can expect to see more of these over the coming weeks also. In addition to which, we will be working to make further improvements to the LimeSDR platform documentation and examples.”

New demonstrations have been published showing the LMS8001 Companion Board working at 10 GHz and the LimeSDR Mini being used to create an Osmocom-powered GSM base station on a Raspberry Pi 3.

Although the campaign has officially closed, those interested in the LimeSDR Mini, LMS8001 Companion Board, or any of the supported accessories are still able to place pre-orders.

Those who already have a LimeSDR will be pleased to see the Wireless Masterclass series continues with a look at the LMS7002 which powers the LimeSDR.

The latest video presentation from Dr. Danny Webster walks through the Lime Microsystems LMS7002 field-programmable radio frequency (FPRF) integrated circuit which sits at the heart of both the LimeSDR and the LimeSDR Mini. As well as diving into the circuit itself, Danny also offers tips for resolving issues common to all software defined radio platforms – making the video a must-watch for anyone interested in the topic.

Over on the forums Djani ‘9A4DB’ Bodlovic has shared an intriguing biconic dipole antenna design constructed from the finest IKEA serving bowls and boasting a sub-1:2 standing wave ratio (SWR).

“Works like an average dipole,” Djani explains in the Making Antennas forum thread, “just wide-band. It can be done 1 to 3 GHz but you may have higher SWR on top end. The cones must be smaller, no such cones in IKEA so you must order custom made from copper or brass. Stainless steel is not so good for higher freq, but you see from curve that can be used.”

Available on Thingiverse under a Creative Commons licence, the design offers a centre frequency of 1550 MHz. The 3D printed parts are combined with a 2mm-thick aluminium base plate, copper cable, and an SMA flange to form the antenna, which is also available in a Right Hand Circular Polarised (RHCP) variant for use without a dish. Combining the left-hand version with an 80cm dish, Manuel demonstrates impressive reception at a very low cost.

RTL-SDR has written an update on the Fairwaves XTRX SDR project, which is said to be launching on crowdfunding site Crowd Supply in the very near future.

Based on the same Lime Microsystems LMS7002M FPRF as the LimeSDR and LimeSDR Mini, the Fairwaves XTRX is built into a mini-PCI Express (mini-PCI) form factor for high-speed connection inside small form-factor machines – including suitable single-board computers and laptops, with testing having been carried out earlier this year showing its suitability for use with the ARM-based Nvidia Jetson TK1 single-board computer development kit. Final pricing has yet to be confirmed.

The planned launch of the Radiation Effects Satellite (RadFxSat Fox-1B) as a secondary payload on the Joint Polar Satellite System-1 (JPSS-1) launch has been delayed due to a faulty battery in the ULA Delta II rocket’s booster.

One of four CubeSats which make up the educational NASA ElaNa XIV mission, RadFxSat was due to enter orbit earlier this month. The battery fault on the launch system has now pushed the satellite’s go-live date back to the 14th of November. When the satellite does go live, operators for around the world are encouraged to tune in as part of the Amateur Satellite programme.

The European Telecommunications Standards Institute (ETSI) has published a white paper detailing a framework for software defined radio technology (PDF warning), predicting that it will be vital for a range of telecommunications platforms in the future.

Proposing a platform based around the concept of a radio virtual machine, which “corresponds to an abstract representation of a radio algorithm,” ETSI’s proposal offers a flexible framework in which “original hardwired components may selectively be re-parameterised or replaced by software components.” Example use-cases include smartphone reconfiguration, long-life automotive systems, and Internet of Things (IoT) platforms, all of which may need to adapt to new network standards within their lifespan.

Google has released a range of Global Navigation Satellite System (GNSS) analysis tools and CNXSoft has taken them for a test-drive, finding the software powerful but complex for beginners.

Designed for use with data captured from a smartphone’s GNSS system via a companion Android application, Google’s software provides interactive plots organised into three columns detailing the behaviour of the radiofrequency reception, clock, and measurements, with support for multiple constellations including GPS, GLONASS, Galileo, BeiDou, and QZSS. The software is available now from the Android Developer site.

Finally, RTL-SDR has gathered together a list of talks on software defined radio and general radio topics from the Defcon 25 conference, picking out a range of interesting presentations and demonstrations.

Among the talks highlighted are a radio exploitation introduction by Matt Knight, a look at stopping SDR-powered relay attacks against vehicles by Weston Hecker and another on replay attacks against home security systems by Eric Escobar, a talk by Robert Ghilduta on designing an automatic gain control in VHDL, and a discussion on controlling Internet of Things (IoT) devices using a LimeSDR by Calreb Madrigal.

Based 20 kilometres outside Turin, Mario Cannistrà has a sporty background “I studied digital electronics and computer science, then started working in the software industry in 1984,” he explains. “During the past ten years I’ve worked for international sports federations and broadcasters, mostly on soccer, rugby and olympic events.”

His use of software defined radio, though, is more in service to his principle hobby. “I’m a long time amateur astronomer,” Mario explains, “and I currently own a [Celestron] C11 Edge HD [telescope] which I mainly use for observing and sometimes for a bit of planetary imaging and digital photography.

“My interest for radio-astronomy actually started in the 80s, reading a radio-astronomy article in a Italian amateur astronomy magazine,” Mario recalls. “I remember the authors were Gianfranco Sinigaglia (I4BBE) and, probably, Goliardo Tomassetti (I4BER), two great HAMs that also wrote books on the topic. Tomassetti was a researcher at IRA-INAF [Istituto di Radioastronomia at the Instituto Nazionale di Astrofisica] and Sinigaglia worked directly at the construction of the “Croce del Nord” radiotelescope in Medicina, Italy, and its prototype before.

“I already had some knowledge about radio and electronics before going to school thanks to more than a hundred magazines about HAM radio I got from an Italian HAM, a friend of my father. Unfortunately, at the time it was more difficult for me to approach that kind of construction with many components to find and solder with proper RF shielding techniques and then tuning and measuring.”

These days, of course, things are significantly simplified thanks to software defined radio technology. “I read of RTL-SDR dongles in IEEE Spectrum magazine, and the first experiments I did were encouraging. I was able to mimic NASA Radio-Jove work at 20.1 MHz, but looking at 2 MHz of spectrum instead of logging signal strength at a single frequency with an analog receiver.

“I saw radio-astronomy at the confluence of analogue, digital, software, and physics, and I found the opportunity to learn more about RF and physics domains, merging and controlling them with software, extremely exciting. Those SDR dongles are just 8 bit, somewhat noisy, and have several issues, but that didn’t stop me from publishing my Raspberry Pi radio-astronomy project on Hackster.io. It was well received, with lots of views and likes for a project of its kind.”

Soon, though, Mario’s desire for bigger things grew. “I absolutely had the need to work with a better radio, wider bandwidth, higher dynamic range, faster and more precise analogue to digital converter,” he explains. “I saw LimeSDR’s Crowd Supply campaign and grabbed the opportunity on the fly. Great features at an acceptable price for a low budget experimenter like me.

“All my software runs on a old laptop with USB 3.0 and latest Ubuntu operating system. The same runs fine also on Windows, on which I’ve installed the free Anaconda Python environment. I use my LimeSDR plus a custom built bandpass filter for the 15-30 MHz range and a custom built TFD [Terminated Folded Dipole] antenna with 16:1 balun. The same software actually runs well on Debian and the Raspberry Pi, but the USB 2.0 connection would not allow me to leverage all of the LimeSDR’s bandwidth so I keep that hardware setup for other projects.”

The results speak for themselves. “During the first half of September 2017 I captured lots of wonderful solar emissions during the various CME [Coronal Mass Ejection] flares that happened in those days. A good number of those spectrograms are available here and here for download.”

Mario’s ideas for the future of SDR hardware are, naturally, focused upon improving their suitability for radio-astronomy projects. “Most radio-astronomy work is based on FFT [Fast Fourier Transform] processing of the raw IQ data coming from the SDR, with some configurable integration time. Doing this on a wide bandwidth requires a powerful CPU, and this consumes lots of power. I would really like to have the FFT processing done inside the SDR FPGA. That would allow the use of smaller and less power-hungry single board computers, ideally running 24/7 unattended.”

For those eager to get started in the hobby of radio-astronomy, Mario offers some advice. “In my opinion it’s very important to learn about IQ representation of radio signals, and possibly about ADC [Analogue to Digital Conversion] and DSP [Digital Signal Processing] techniques. This will allow you to make the best SDR choice for your usage scenario.

“Many projects or experiments can be attractive but the antenna size will affect your choices heavily. I know of people that started with a 1m dish or a 70cm wooden horn, others with a 7m dipole and still others with a couple of 10m dishes, just because they had them – and plenty of backyard space! Be sure of your observation target frequency or frequency range, whether you have the space to buy or build your antenna, pick the best SDR for your budget and check for software availability in advance. Remember that you can’t amplify what you didn’t catch because of a poor-quality or too small antenna. Don’t save on that or your SDR will not be leveraged. Consider filtering both to exclude other signals and to mitigate RFI. Don’t forget to read, read, read books and browse forums before starting. You should always leverage others’ experiences to shorten your path. Every week I learn something and this journey is part of the fun.”

Asked to recount a “learning experience,” Mario smiles. “As always there are funny and dangerous sides to this hobby. I still remember when I grabbed the soldering iron from the tip because I was not looking – I was sharing it with a friend – and I also learned at the age of 15, I guess, that you can fire LED tips long distances using no resistor and high enough voltages!”