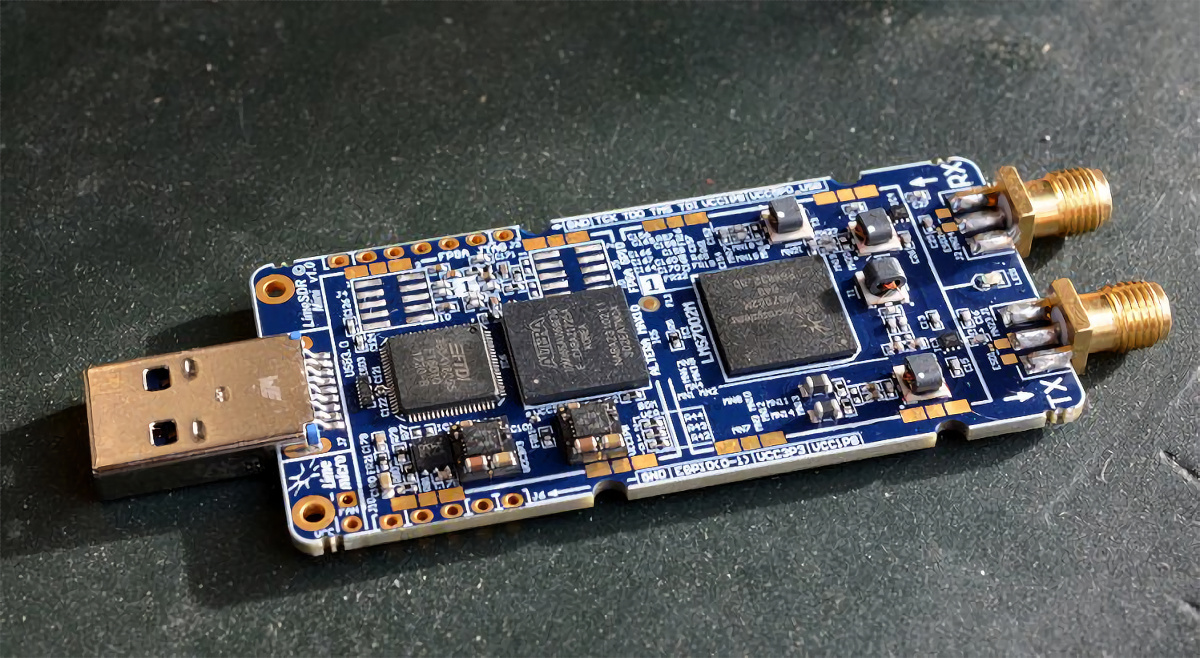 Karl Woodward’s LimeSDR Made Simple series headed into its eight instalment this week with a look at how to program the LimeSDR from a Linux host.

“Very early on in episode one we promised to work from SDR novice to API programming examples in small, bite sized chunks,” Karl explains of the series. “Having done many of those steps it’s now time to take the final one and start programming. For those who have read the whole series we have touched on programming before with GNU Octave, and in a way Pothos and GNU radio — so moving to direct API access should be a tiny step.”

The eight instalment of the LimeSDR Made Simple series covers programming for the LimeSDR on a Linux host using the SoapySDR application programming interface (API) from C language programs. All previous parts in the series can also be found on the blog.

The LimeSDR Mini project is proceeding on schedule with the first pre-production v1.0 boards arriving from the factory, offering a first look at the design which is heading into production for shipping later this year.

Designed to offer a more affordable alternative to the full-size LimeSDR, the LimeSDR Mini has proven popular. Previous campaign updates have demonstrated its capabilities but the latest campaign update offers something for which backers have been waiting: a look at the final v1.0 board design, straight from the factory. Featuring a more polished layout than the prototypes, the LimeSDR Mini v1.0 includes rounded corners to the PCB, SMA connectors for receive and transmit, U.FL connectors on the underside for reference clock input/output, and the mounting notches necessary for the acrylic case accessory.

The pre-production batch is set to be used to finalise and test the acrylic case design before that too heads to production, after which time a small number of boards will be distributed to key members of the Myriad-RF community for evaluation ahead of the planned production-model shipping date of the 31st of December 2017.

Those who already have a LimeSDR may be interested in an ongoing forum discussion on modifying the FPGA gateware to squeeze in additional functionality and customise the board for particular tasks.

The field programmable gate array (FPGA) on the LimeSDR provides a means of communication between the host PC and the LMS70002 field programmable radiofrequency (FPRF) chip. However, as a field-programmable device the FPGA can be quickly modified to perform some other task – and that’s exactly what forum member Will is working towards. “I’m trying to narrow down being able to maintain the basics,” he explains, “antenna port, frequency, gain, etc while giving me more space to put some signal processing capability in the FPGA (for RX only).”

While Will’s work is not yet complete, the thread is certainly one to watch for anyone interested in working on their own FPGA modifications.

Vanu Bose, along with colleagues Mike Ismert, Matt Welborn, and John Guttag, worked on a Massachusetts Institute of Technology (MIT) programme dubbed SpectrumWare and most clearly described in the 1998 paper Virtual Radios. Generally considered to be a pioneering project in the software defined radio space, SpectrumWare formed the basis for a range of SDR projects from Vanu’s commercial implementations to the popular GNU Radio.

Within the last few weeks Vanu had been working on building SDR-based cellular base stations powered by solar panels for emergency response and rural deployment. His death was reportedly the result of a pulmonary embolism. Vanu is survived by his wife Judy and daughter Kamala.

Analog Device’s Wei Zhou has published a piece on the challenges associated with high-definition, low-delay video transmissions using SDR technology, based around the company’s AD9361 transceiver.

“Integrated RF agile transceivers are not only widely employed in software-defined radio (SDR) architectures in cellular telephone base stations, such as multiservice distributed access system (MDAS) and small cell, but also for wireless HD video transmission for industrial, commercial, and military applications, such as unmanned aerial vehicles (UAVs),” Wei explains. “In a simplified wireless video transmission scheme, the camera captures the image and transmits video data to a baseband processor via Ethernet, HDMI, USB, or another interface. Image coding/decoding can be handled by hardware or an FPGA. The RF front includes the switcher, LNA, and PA to the programmable integrated transceiver.”

“UHD is a key part of many broadcasters’ portfolios,” explained DVB chair Peter MacAvock at the announcement of the standard’s completion. “DVB has worked tirelessly to finalise a comprehensive set of specifications for UHD. While work continues, DVB is certain that broadcasters can confidently implement UHD on the basis of its specifications.”

Other announcements made during the Steering Board’s 87th meeting include a new revision to ETSI TS 103 285, which adds the ability to provide live text messages and slideshows to Hybrid Digital Radio devices, support for interactive applications linked to DVB-DASH broadcasts, high dynamic range (HDR), high frame rate (HFR), and next-generation audio (NGA) support, amendments to TS 101 154 which add conformance points for the use of the H.264/AVC and HEVC video codecs with MPEG-DASH, and amentments to the ETSI EN 300 743 standard for DVB Subtiting Systems which include UHDTV support, progressive-scan oject coding, and new colour systems for the colour look-up table (CLUT).

If you’re trying to get your head around the new features of the Bluetooth 5 standard Allen Henley’s write-up on EDN might be exactly what you’re looking for, walking as it does through the newly-added physical layer enhancements as implemented in real-world devices.

“No single wireless technology is ideal for all internet of things (IoT) applications. For short range, low power, and low data rates, the most common choices are ZigBee, Z-Wave, and Bluetooth Low Energy. With new enhancements that are being added to Bluetooth, the wireless link will become even more appealing and its usage will increase in this category of IoT applications,” Allen writes by way of introduction. “Bluetooth 5 is adding capabilities to improve range and increase data throughput. It will support mesh networks that can improve reliability while maintaining low power consumption.”

For a broader look at radio frequency system design IEEE Spectrum’s latest whitepaper offers a great overview of the fundamentals that must be considered, from the transmission medium itself all the way through to the verification process.

Designed to walk through an RF system design from first principles, the paper starts at the consideration of the transmission medium, wave propagation and free-space path loss before taking in transmission and reception of signals, link designs, and the key components required. Written with the aim of offering practical knowledge for those looking to design an RF system, the paper will also be of interest to anyone looking to dig deeper into RF fundamentals.

Finally, the Radiation Effects Satellite (RadFxSat Fox-1B) has finally launched after a faulty battery in the ULA Delta II rocket’s booster had delayed its initial attempt to enter orbit.

One of four CubeSats which make up the educational NASA ElaNa XIV mission, RadFxSat Fox-1B was deployed on Saturday the 18th of November after an uneventful launch. The first telemetry signals were received two hours after deployment, demonstrating that the satellite is functioning correctly and granting it the Amateur Satellite designation of AMSAT-OSCAR 91 (AO-91).

Those interested in communicating with the satellite can find a radio programming chart and more information on AMSAT-UK.