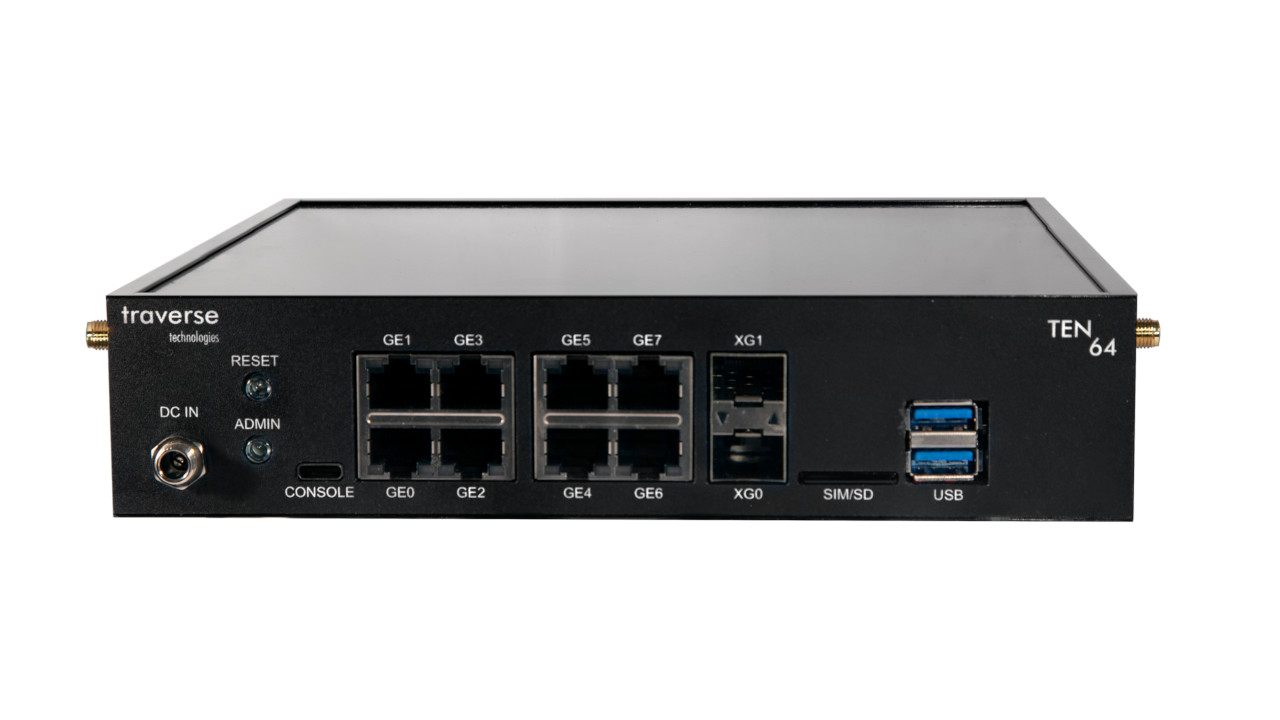 Traverse Technologies has showcased the flexibility of its Ten64 eight-core Linux-based networking platform for wireless use, demonstrating its compatibility with the LimeSDR USB and GNU Radio.

“There has been quite a bit of interest in using Ten64 for software-defined radio (SDR) applications,” the company explains, “so we have put together a simple demo using a LimeSDR to tune into an FM radio station and stream it to the internet.”

Built as a Docker container, the project uses GNU Radio to capture an FM signal using the LimeSDR, demodulate it, and pipe the audio through JACK to DarkIce for MP3 compression. This audio is then streamed to compatible clients, including web browsers and multimedia engines, using Icecast, while nginx serves as a frontend.

“The above container stack can be deployed both directly on the hardware, or under a VM (with at least two CPU cores) using USB passthrough,” Traverse explains. “This architecture could be extended in various ways, for example, with multiple tuner instances feeding a single Icecast instance, or by moving the frontend components into the cloud. If you don’t need visualisations, you can export a GUI-free, completely headless tuner application from the GNU Radio Companion.”

More details can be found on the Ten64 Crowd Supply campaign page.

Production of the LimeRFE, a software-definable radio-frequency front-end module built for the LimeSDR family, has shifted to a new factory with a target of fulfilling all orders in January 2021.

“We missed our August delivery date due to parts shortages,” explains Lime Micro’s Ebrahim Bushehri. “We’ve since completed the redesign necessary to accommodate alternative components, sourced those components, completely relocated our factories, and are starting manufacture.

“Due to the COVID-19 pandemic and generalized global supply chain instability, we were suffering from LimeRFE production being spread among three locations (UK, Eastern Europe, and East Asia), so decided to consolidate to two locations (UK and a different Eastern Europe location). This consolidation is now complete and already yielding results. For example, our new production facility has a reliable source of Rogers dielectric material, which is what is being used for the printed circuit board itself.”

With production now shifted and the parts shortages resolved, production is expected to continue without interruption with a view to shipping all units in January 2021. Adds Ebrahim, “Thank you for your patience.”

The US House of Representatives has voted to approve $750 million in funding for open radio access network (open RAN) technologies to support the deployment of 5G cellular networks in the nation.

Passed as HR 6624, the Utilising Strategic Allied Telecommunications Act of 2020, the Bill for funding open RAN technologies – which allow for cross-vendor interoperability, promise an end to lock-in, and promote the democratisation of communications technologies – was first introduced in April this year by the chair of the House Energy and Commerce Committee Frank Pallone.

“From keeping Americans better informed during emergencies to promoting 5G coordination, competitiveness and security, these three Bills will create a better, safer communications network for us all,” Pallone and colleague Mike Doyle claimed following the passing of HR 6624 and two related Bills. “At its core, our telecommunications infrastructure exists to serve the public interest and connect our nation, and we are proud of the bipartisan work that went into advancing that goal with these three Bills. We thank all our colleagues for working with us to get such important legislation passed today.”

More information on the bill is available on Congress.gov.

Elsewhere in the US the Federal Communications Commission (FCC) has announced a shift in spectrum allocation which sees an additional 45 MHz of spectrum from the 5.9 GHz band made available for unlicensed use.

“We will require the limited DSRC [Dedicated Short-Range Communications] operations currently deployed over the full 5.9 GHz band to transition to the upper 30-megahertz segment of the band within one year. We also adopt C-V2X [Cellular Vehicle-to-Everything] as the new technological standard for ITS operations in the upper 30 megahertz of the band and seek comment on the appropriate rules and timeline for transitioning from DSRC to C-V2X-based operations.”

Full details on the changes can be found on the FCC website.

Frugal Radio has demonstrated a method for sharing a single antenna across multiple radios, with as little signal loss as possible – proving the point by connecting 15 radios to just one antenna.

“When splitting an antenna signal, you don’t want to experience loss,” explains channel founder Rob. “So using traditional Y connectors is a no-no. Passive splitters also suffer from loss, so you will want some kind of active device. Multicouplers are devices that take 1 antenna input, and split it across multiple outputs with very little loss. These active devices often introduce a little extra gain.

“Commercial multicouplers are not particularly frugal devices. So while I use 1 commercial unit, I also use a much less expensive hack to feed other radios. Here is the other ‘multicoupler’ I use. Officially it is a TV drop amp. My unit is a used Electroline 8 port amp that I purchased on eBay for under $35. It introduces a little extra gain (approx 4.5dB per port). If I was buying one today, I would get the model that offers zero gain.”

Ham enthusiast Adam ‘K6ARK’ Kimmerly has posted an antenna build video with a difference: the antenna is barely larger than the BNC connector used to hook it up to a radio.

“End-fed half-wave style antennas are fantastic for portable use,” Adam explains. “They don’t require a feed line, they’re resonant so you don’t need a tuner, they’re mono-band typically however you can add links for multiple bands – or better yet add traps. Traps make band changes a piece of cake.”

Adam’s design, brought to our attention by Hackaday, is constructed from BNC connectors, toroids, compact capacitors, magnet wire, and antenna wire, with everything held together with heat shrink tubing and five-minute epoxy and all weighing a fraction that of an off-the-shelf antenna.

Engineer Josh Conway has published a design which uses a pantograph-style 3D-printed articulation system linked to a microcontroller to create an automatically-adjustable antenna array for direction finding.

“I accomplish software-controlled spacing of arbitrary number of elements in a 2 dimensional grid by way of a pantograph mechanism,” Josh explains of the design. “Pantographs maintain even spacing between each cross vertices. By tuning the angle of incidence, one can accurately and repeatably tune to the wavelengths requested by a software defined radio operator.

“The code on the microcontroller maintains 2 primary functions. First, is its requirement to home and get a starting location and beginning frequency to start positioning. Secondly, the microcontroller then accepts frequency requests within its minimum-maximum band, and then adjusts the stepper motor to position the final element to the correct spacing.”

RTL-SDR, which brought the project to our attention, notes that Josh applied for a patent but was rejected – so decided to make the design available under the AGPL 3.0 licence.

The design is available now on Josh’s GitLab repository.

Security researcher Jacek Lipkowski has demonstrated how it’s possible to leak data from a device’s Ethernet port such that it can be picked up at distance by a radio – proving the concept on a Raspberry Pi.

“Leaking data via out of unconnected devices (both connected and unconnected) is a very interesting topic, often called ‘soft TEMPEST,'” Jacek explains. “Often this is the realm of absurdly costly lab equipment, source code isn’t published etc. Here I would like to demonstrate this using the simplest equipment and means, and make it very easy to reproduce.

“Signals can be modulated using different methods. Here I will use Morse code for simplicity. This also allows one to judge the signal to noise ratio by just listening. It is also possible to decode it by ear without additional devices if one knows Morse code, if not there is a lot of software that can do it (although usually with much worse performance than an experienced human operator.) Transmission is implemented via very simple shell scripts.”

In testing, Jacek found that the signals were receivable automatically at distances up to 30m and with manual transcription from Morse at up to 100m. More information is available on his blog, with source code for the shell scripts available on GitHub.

Evariste ‘F5OEO’ Courjaud has released an update for RPiTX, a tool for wireless transmission from a Raspberry Pi’s GPIO header using only a wire antenna, which brings initial support for both the Raspberry Pi 4 and the 64-bit Raspberry Pi OS.

“RPiTX is a general radio frequency transmitter for Raspberry Pi which doesn’t require any other hardware unless filter to avoid interference,” Evariste explains of the project. “It can handle frequencies from 5 KHz up to 1500 MHz.”

While RPiTX has been available for some time, its previous releases were limited to older models of the popular Raspberry Pi single-board computer family. The latest version, announced earlier this month to the user group, offers full compatibility across the Raspberry Pi range – including with the Raspberry Pi 4 Model B and the newly-launched all-in-one Raspberry Pi 400.

The new release also adds support for the 64-bit build of Raspberry Pi OS, the custom Debian-derived Linux distribution recommended by the Raspberry Pi Foundation. While the 32-bit version remains the default, increasing numbers of users are switching to the 64-bit version – still in beta – for the promise of boosted performance, particularly on the latest 8GB model of Raspberry Pi 4.

The new RPiTX release is available now from the project’s GitHub repository.

“Simple dPMR decoder,” its creator Vasil writes of the plugin, which is a small ZIP archive with just three files for installation into SDR# – two DLLs and a text file containing the plugin configuration line. “No external dependencies, no settings, uses SDR # audio path. Designed for listening to unencrypted dPMR channels.”

The plugin is available for free download from RTL-SDR.ru now.

“A recent write-up by Tom Nardi about using the 6502-based NES to track satellites brought back memories of my senior project at Georgia Tech back in the early 80s,” Chris writes. “At our club station W4AQL, I had become interested in Amateur Radio satellites. It was quite a thrill to hear your signal returning from space, adjusting for Doppler as it speeds overhead, keeping the antennas pointed, all while carrying on a brief conversation with other Earth stations or copying spacecraft telemetry, usually in Morse code.

“I recall two events from this period which led me to consider a computer controlled project. First of all, we inherited two Commodore PET computers from one of the EE professors. Secondly, we had an ongoing issue controlling equipment up on the roof of the 5th floor from our shack located at basement level. There just weren’t enough wires to do all the things we wanted even for normal HF operations, much less satellite tracking.”

Chris’ full write-up, including a FORTRAN-based precursor to his PET project, a solution for a lack of feedback, and a selection of upgrades – including a later switch to the PET’s more popular successor, the Commodore 64 – is available on Hackaday.