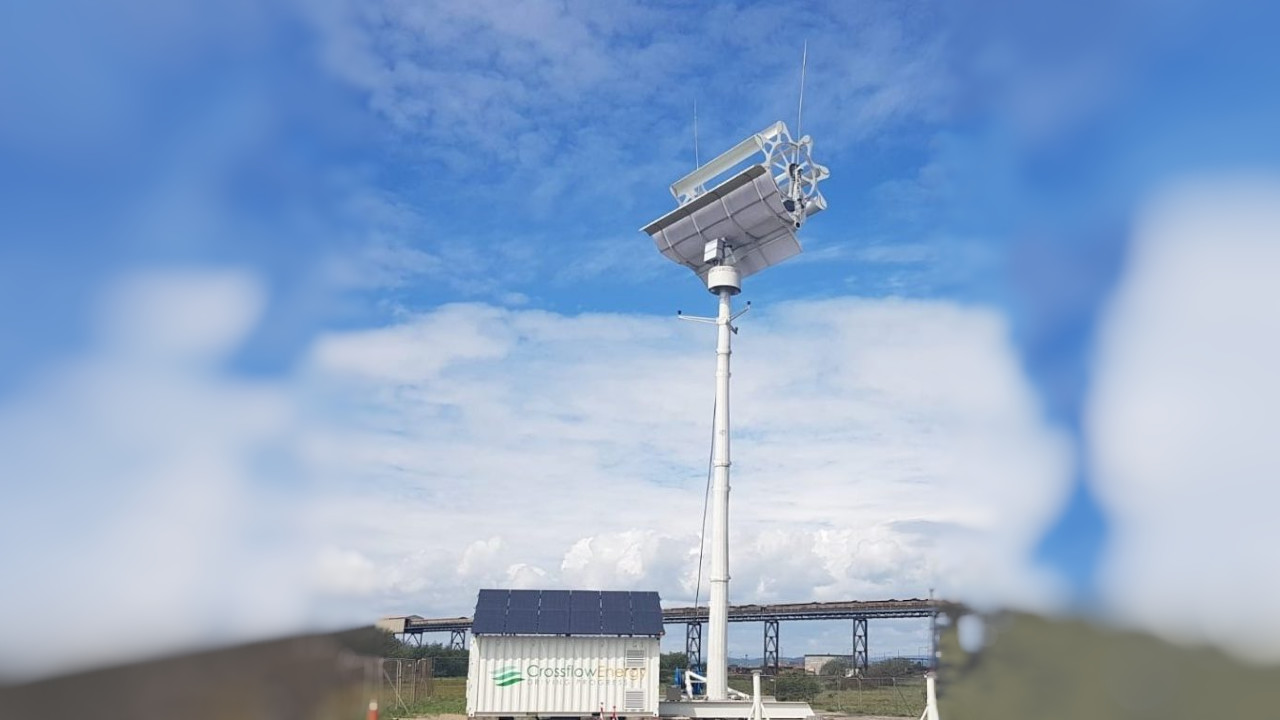 The UK government has announced a target of carrying 35 per cent of all cellular traffic over open radio access networks (open RANs) by 2030, alongside the planned retirement of 2G and 3G cellular – and LimeSDR technology has been selected for two key test-bed projects.

“The mobile network operators have confirmed that they do not intend to offer 2G and 3G mobile networks past 2033 at the latest,” the Department for Digital, Culture, Media, and Sport (DCMS) said in a statement on the sunsetting schedule. “We welcome that some individual operators will switch off their networks, particularly their 3G networks, earlier than this date, and will announce their own plans about when and how they intend to do this.”

“Switching off 2G and 3G will enable operators to transition fully to more energy efficient and high capacity networks to the benefit of customers,” says Hamish MacLeod, director of Mobile UK, of the government’s plans. “We are also working with government and wider industry to support the maturity of new RAN solutions to open up further opportunities for innovation and new services in the future.”

Of the government’s target to carry at least 35 per cent of cellular traffic over open RAN by 2030, the DCMS said: “Joint activity will include investment in the research and development, deployment, and adoption of open network technologies, creating the right market environment to foster and encourage innovation, and international partnerships that bring together learning from across the global supply chain.”

To work towards that target, the government has picked successful bids for its Future Radio Access Network Competition, or FRANC, including two projects powered by LimeSDR technology. The first, Flex-5G, aims to prove the capabilities of a flexible open RAN system no larger than a desktop computer and powered by software-defined radio technology; the second combines LimeSDR technology with a novel wide-band high-efficiency power amplifier for open RAN cellular at frequencies up to 10GHz – while also acting as a test-bed for a quantum-proof security layer developed by project partner Arqit.

BT Group, formerly known as British Telecom, is among the companies looking to deploy open RAN technology ahead of the government’s deadline – but one of its principal researchers has warned it’s still “early days” for the technology.

“We don’t focus too much on the cost savings as the primary goal,” BT principal researcher Richard MacKenzie claimed during a symposium on open RAN held by Light Reading earlier this month, claiming the company “is not going to sacrifice the customer experience just to achieve these cost savings.”

At the same event, Richard told attendees that BT is in the process of running a series of open RAN trials as part of its work with the Telecom Infra Project (TIP) – and that any findings the company makes will feed back into TIP for the benefit of all, as part of its work towards vendor neutrality and interoperability.

“It’s early days for open RAN,” Richard claimed, but tempered this with a prediction that “in the long term, it’s a real competitor.”

More from the event is available on Light Reading.

Developer RightHalfPlane has announced a new release of SdrGlut, a simple-to-use player for software defined radio devices, with features designed to make it more usable with the LimeSDR family.

“SdrGlut V1.27 adds a zoom option for the Water Fall and Power Spectrum windows,” the developer explained in an announcement to the MyriadRF Discourse forum earlier this month. “These changes make SdrGlut more usable with wide bandwidth devices like the LimeSDR devices.”

Built around GLUT, the OpenGL Utility Toolkit, SdrGlut is designed to be portable, compact, and simple, and recently added a Voice Command Module for recording any frequency in any mode at any time.

In SdrGlut v.1.27, it’s possible to zoom using the scroll wheel on both the Power Spectrum and Waterfall views, while other improvements include mode and bandwidth selection options on the start-up window and the ability to launch a dedicated zoom window.

The software is provided in pre-built binary format for Apple macOS, Microsoft Windows, and Ubuntu Linux; the source code, meanwhile, is made available under the permissive MIT licence on the project’s GitHub repository.

“Arducon is for active radio enthusiasts involved in the outdoor sport of Amateur Radio Direction Finding (ARDF),” Charles explains. “ARDF happens to be the most popular (only?) athletic radio sport in the world. The sport of ARDF employs radio transmitters that are automatically controlled and timed with high precision.

“A transmitter controller is (you guessed it) what controls the transmitters: Turning them off-and-on at the right times and having them send specific Morse code signal patterns. Arducon does all those things, and much more.”

The board offers support for all ARDF transmit timing and patterns, can activate and deactivate transmissions based on a temperature-compensate real-time clock, can be configured remotely via DTMF tones with a password lock to prevent unauthorised access, and can report its voltage and temperature for monitoring.

“Arducon is 100% Open Source: both the software and the hardware source are freely available so you can modify and improve upon it as you see fit. In addition to its intended purpose, you might find Arducon to be a useful platform for experimentation with other project concepts requiring precise timing or DTMF decoding.

The crowdfunding campaign is live on Kickstarter now, with physical rewards starting at $10 for a bare PCB, $50 for a board with the surface-mount components already mounted, $60 for a kit including the parts for 2m FM and 80m operation, or $65 for a kit supporting 2m FM, 80m, and 2m AM operation.

Design files, software, and case STL files for 3D-printing a case are available on GitHub under the permissive MIT licence.

The University of Glasgow has announced that it has won a grant which will bbe used to launch a 6G cellular test-bed environment, as an expansion to its Microwave and Terahertz Research Lab, with a view to testing prototype 6G devices.

“6G communications networks are expected to be commercially available by 2030, and to deliver transformative benefits beyond the already remarkable capabilities of 5G,” says Edward Wasige, professor at the James Watt School of Engineering and principal investigator of the project.

“However, there is still a great deal of work to be done to develop the infrastructure, spectrum and protocols that will support data transfer at the speeds of 1.1 terahertz and beyond to deliver 6G. Our new facility will play a key role in supporting the development of the technology which will underpin the next generation of wireless communications.”

“We’re proud to be working at the leading edge of this exciting technology to help deliver the predicted capabilities of 6G in areas like low-carbon growth, self-driving vehicles and artificial intelligence.”

More information is available in the University announcement.

“We are committed to improving rural connectivity, but this comes with some very significant challenges,” admits Andrea Dona, Vodafone UK’s chief network officer. “Connecting masts to the energy grid can be a major barrier to delivering this objective, so making these sites self-sufficient is a huge step forward for us and for the mobile industry.

“Our approach to managing our network as responsibly as possible is very simple: we put sustainability at the heart of every decision. There is no silver bullet to reducing energy consumption, but each of these steps forward takes us closer to achieving net zero for our UK operations by 2027.”

The masts combine radio access network equipment with compact wind turbines developed by Crossflow Energy, connecting to a shipping container with solar panels and batteries to allow for wholly off-grid use – making them considerably easier to deploy in rural regions.

“We are really excited to be working with Vodafone. It’s a fantastic opportunity to show how our self-powered Eco-Tower solves the problem of harnessing ‘small wind’ to offer not just that all-important carbon reduction, but also significant commercial benefits. In the case of Vodafone, it will help to accelerate the expansion of rural connectivity, transform energy consumption patterns and deliver significant economic and carbon savings.

“Our turbine technology has equally strong applications for so many other industries, but to have such a high-profile player as Vodafone deploying our Eco-Tower is a major endorsement for us and our technology.”

More information on the project is available in Vodafone’s announcement.

The Telecom Infra Project, founded as a means of encouraging the development and adoption of technologies including open RAN, has announced the departure of executive director Attilio Zani after three years in the post.

“It has been a great honour to lead TIP, particularly during such a dynamic and critical moment in the history of the industry,” Attilio said in the announcement of his departure. “The past two years in particular have put a real spotlight on the telecoms ecosystem’s role as part of the life support system of our economies and societies, and its need for continued change to be able to meet the increasing demand for greater connectivity.

“The need to create a more diverse ecosystem of disaggregated and interoperable solutions has never been more pressing. I am proud to have supported the TIP community, which is at the heart of this effort, in their relentless drive to improve connectivity for everyone.”

“On behalf of the Board of Directors and the wider community, I would like to thank Attilio for his commitment to the telecommunications industry and his leadership in TIP and its mission,” added Yago Tenorio, TIP chair. “Attilio has been a strong advocate for the value of disaggregation of telecoms solutions not only within the industry and broader ecosystem but also to government officials and regulators across the world.

“He leaves TIP as a stronger, more expansive organization than the one he joined three years ago. We wish him every success in his future endeavours.”

TIP has not yet announced a successor, but took the opportunity to confirm that former Open Compute Project chief executive Rocky Bullock was joining the organisation as director of operations effective immediately.

“About five years ago I published a three-part series on this little ‘Widowmaker’ off-the-line transmitter that was based on an article from a 1968 elementary electronics publication,” explains Mike Murphy WU2D, “and this little breadboard transmitter which actually operated right off the AC line with no isolation.

“It was a way that some hams at least in this country got on the air. Now was it dangerous? Yes, it was dangerous, because at that time they didn’t have these nice IEC type cables that at least give you a chance to understand hot, neutral, and ground. Now that doesn’t mean that your house is properly wired and that neutral and ground are properly connected at the outlet – I found that about half of my outlets were miswired so you have to be very careful.

“Somebody asked me ‘Mike, how many times have you been shocked?’ I’ve been playing with radio stuff since I was a kid because I had a TV repair guy as an uncle, he gave me things he probably shouldn’t have that i was playing with. So if you average out the number of high voltage shocks that I’ve had over my career, boy, I’d have to be pushing a hundred.

“But by far the worst shocks I’ve gotten,” Mike continues, “have not been high voltage shocks they’ve been the voltage between the line and neutral or line and ground so just because something’s only 117 volts or 120 volts or 230 volts that doesn’t mean that can’t give you the worst shock of your life.”

The full video, which shows the “Widowmaker” design in action alongside a simple neon bulb safety feature, is available on Mike’s YouTube channel now.