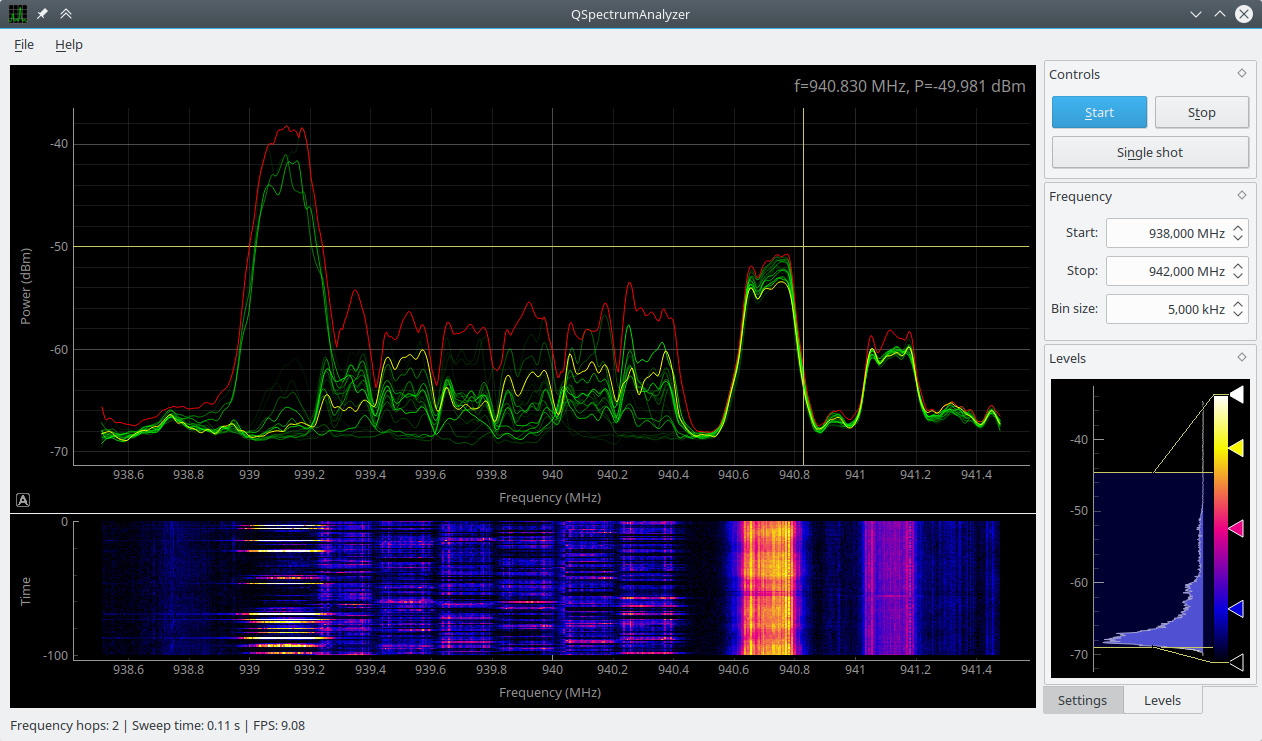 The stable branch of LimeSuite has been upgraded to version 17.02.1 this month, adding a handful of new features and a few bug fixes, while the pending release 17.03.0 promises new application programming interface (API) features and improved Serial Peripheral Interface (SPI) communication speeds.

LimeSuite 17.02.1 brings in a fix for a power-of-two size issue in a LimeSDR streaming buffer along with all the improvements in the major 17.02 release: automatic phase configuration for DIQ clocks, a fix for fast Fourier transfer (FFT) average amplitude calculation when multiple-input multiple-output (MIMO) is enabled, a fix for the free USB device list for STREAM connections, improvements to the device handle display and labelling, tweaks for the PCI Express version of LimeSDR, and gain control with dB value display for reception.

The upcoming 17.03.0 release, meanwhile, can be previewed in the master branch of the GitHub repository and includes five new additions to the API: LMS_CalibrateInternalADC, LMS_CalibrateAnalogRSSIDC, LMS_CalibrateRP_BIAS, LMS_CalibrateTxGain, and LMS_SetClockFreqWithSpurCancelation. LimeSuite 17.03.0 also includes speed improvements for x640/x641 SPI communication, an RX-TX loopback control in the FFT viewer, and a major update for the microcontroller-based calibrations.

Over in the forum Michal Krenek has announced the release of a version of his open-source QSpectrumAnalyzer tool which now supports the LimeSDR – though with one small caveat with regards rapid frequency changes.

Built around PyQtGraph, QSpectrumAnalyzer supports the LimeSDR through its SoapySDR-based soapy_power back-end, allowing for direct control and display of spectrum from a connected LimeSDR board. Michal has warned of one minor bug that anyone experimenting with the tool should note, however: rapid frequency changes can result in artefacts appearing on the graph. A fix involving momentarily stopping streaming, tuning, then re-enabling streaming has been developed and tested, and should be implemented in both QSpectrumAnalyzer and the LimeSDR driver soon.

Full details on the tool, plus the source code published under the GNU General Public Licence v3, can be found on the QSpectrumAnalyzer GitHib repository.

Also on GitHub is a repository for a Dedicated Short-Range Communications (DSRC) module for GNURadio, with its developer actively seeking assistance with implementing the technology and getting it ready for use with compatible software defined radios.

In posts to the reddit social network, GitHub user sverrets has requested assistance with the creation of a module designed to provide GNURadio with DSRC capabilities. DSRC is designed to allow vehicles to communicate with roadside base stations for the purposes of everything from automated vehicle monitoring to toll payments. Thus far, sverrets has not clarified the licence under which his module will be published.

In case you missed the announcement last week, MyriadRF has been selected as a mentor organisation for the Google Summer of Code 2017, in partnership with the Open Source Silicon Foundation.

Thus far, two central projects have been proposed: the replacement of the proprietary NIOS-II processor currently used to control USB and SPI communications on the LimeSDR with a CPU core based on the open-source RISC-V architecture, and laying the groundwork for a developmental switch to the FuseSoC flow – although suggestions for other efforts are more than welcome.

Interested parties should email Andrew Back to discuss their ideas and to be paired with a mentor, while the application period for students in the Summer of Code itself closes on the 3rd of April – meaning if you’re looking to participate now’s the time to get the ball rolling!

A Barcelona-based company is looking to do away with traditional antennas in future smartphones, replacing them with a PCB-based booster and the ground plane of the smartphone’s internal circuit board.

Fractus Antennas has developed what it describes as a “virtual antenna,” taking the form of a small 5mm³ FR4-based ‘booster’ which allows smartphones to use their ground plane layer as an internal antenna for transmission and reception at all common frequencies from GSM850 to LTE2500. “This solution eliminates the need to include large customised antenna,” claimed research and development engineer Aurora Andújar of Fractus’ design. “It frees space to enable emergent technologies such as MIMO, as well as to integrate other handset components, services and functionalities.”

The company first spoke of its designs in a press release dated October 2013, and since then it claims to have sold hundreds of thousands to clients developing embedded radio products ranging from vehicle tracking systems to smart meters – though non, it would appear, to smartphone makers as yet. A document describing the company’s mXTEND Antenna Booster and its use is linked from the original press releases but is currently unavailable directly; a copy can be found on the Internet Archive. An interview with co-founder Carles Puente is also available on IEEE Spectrum.

Finally, Pete Juliano has published the building of a solid-state reduced-power (QRP) transmitter using an at-the-time state-of-the-art transistor from 1955.

Offering a great insight into how far hobbyist radio technology has come, Pete’s short write-up details the creation of a simple QRP transmitter using a Philco SB-100 germanium-type surface barrier transistor manufactured in 1955. Using a hand-made circuit built from a hastily-sketched schematic, Pete was able to use the transistor as the basis for a 14.060MHz transmitter running at 0.4mW with a 3V collector supply – well below the the transistor’s maximum 10mW output, but enough to demonstrate the concept.