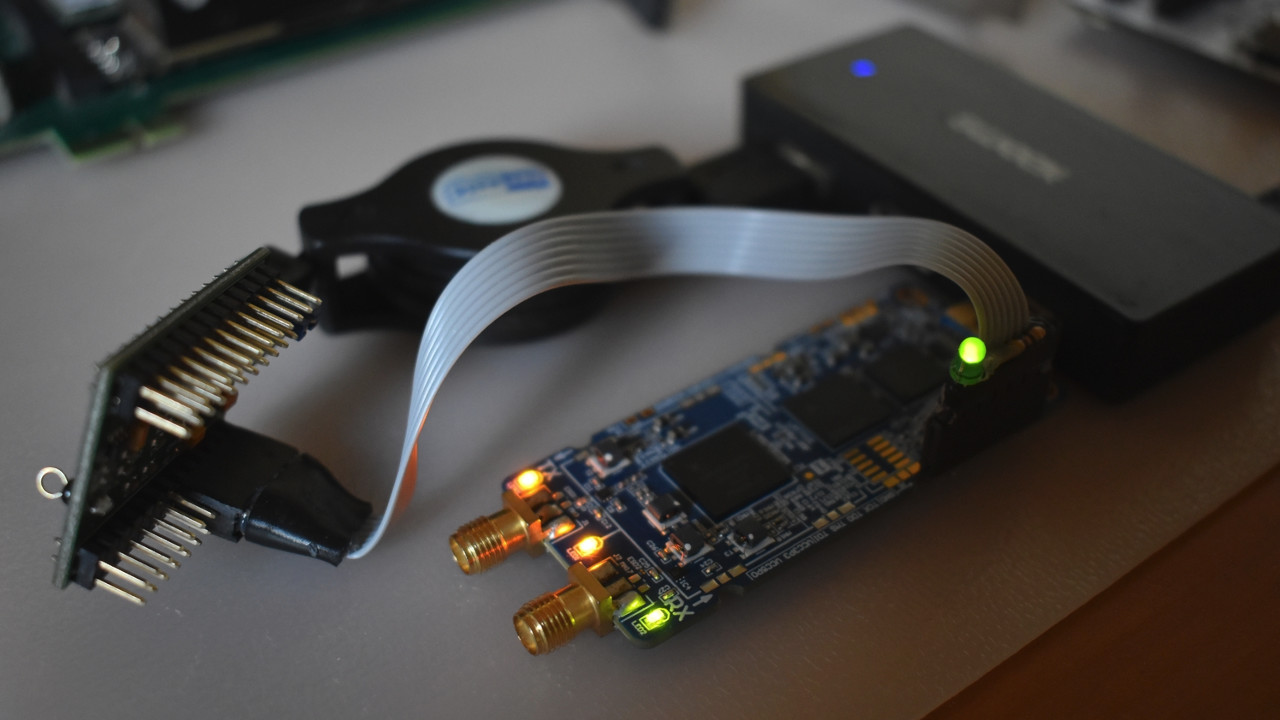 The team at Enjoy Digital has been testing out the upcoming LimeSDR Mini 2.0, and has already turned it into a self-contained computer through the porting of the open-source LiteX system-on-chip to the on-board FPGA — using a fully-open toolchain.

Announced last month, the LimeSDR Mini 2.0 is designed to replace the existing LimeSDR Mini design – primarily as a means of working around ongoing shortages in the original model’s FPGA, but handily providing an opportunity increase the resources available while moving FPGA development away from proprietary software to fully-open toolchains.

“Thanks [to] Lime Micro for the LimeSDR Mini 2.0 early access,” Enjoy Digital wrote on Twitter of experiments with the upcoming hardware. “After a few hours, the LiteX SoC is already in place (with JTAG-UART or JTAGBone), now let’s look at the FT601 + LMS7002M.”

“The ECP5 with its open toolchain makes development so smooth,” Enjoy Digital added.

LiteX is a free and open-source system-on-chip framework – meaning that Enjoy Digital has, effectively, turned the LimeSDR Mini 2.0 into a fully-functional standalone computer, no controlling host required. While performance is limited, with the company’s initial port using a 32-bit RISC-V core running at 80MHz and with just 8kB of static RAM (SRAM), it opens the door to a range of potentially interesting use-cases.

More information on LiteX is available on the project’s GitHub repository, while those interested in pre-ordering the LimeSDR Mini 2.0 can sign up to be notified when the Crowd Supply campaign goes live.

QRadioLink developer Adrian Musceac has shown off a working implementation of an ETSI-compliant Digital Mobile Radio (DMR) base station running on a LimeNET Micro – complete with two inbound timeslots in a true TDMA mode.

“[In this design] we leverage MMDVM-SDR [Peter Rakesh’s Linux port of Jonathan Taylor’s MMDVM firmware] operating as designed and receiving both BS inbound timeslots as specified in the ETSI standard,” Adrian writes. “To operate in TDMA mode, we also need to employ SDR hardware which is capable of providing FPGA timestamps of received samples, and also able to transmit sample bursts at specified timestamps.

“The candidates which were tested were the LimeSDR Mini and LimeNET Micro devices, as they both provide FPGA timestamps. The LimeNET Micro was ultimately chosen for its ability to operate standalone. The LimeRFE device was used as a radio frontend for filtering and power amplification purposes, with the automatic control and band selection being provided by QRadioLink.”

The TDMA functionality on which the project leans is to be released in QRadioLink in the near future, Adrian has promised, with early adopters able to try it out now on the project’s mmdvm_tdma branch. Full details are available on the QRadioLink website, along with an accompanying demonstration video.

Radio amateur and software developer Charles Brain has shown off work on using the free and open-source M17 digital radio modulation protocol with a LimeSDR as the transmitter.

“Seems like my code can now transmit M17 on a LimeSDR,” Charles wrote on Twitter, alongside a video showing the signal being received and decoded into an audible “G4GUO testing” message by the popular SDR++ software.

Developed by Wojciech Kaczmarski and colleagues, M17 is designed as a modern alternative to Digital Mobile Radio (DMR) and is designed to be entirely open-source and both patent- and royalty-free. “M17 is about unlocking the capabilities that amateur radio hardware should already have,” its creators explain.

The M17 protocol is designed around the Codec 2 low-bitrate voice codec developed by communications expert David Rowe, PhD, and colleagues, with support for 3,200 bits per second full-rate and 1,600 bits per second half-rate encoding.

More details on the project are available on the official website, along with a copy of the formal specification.

“It’s been a few years since FreeDV 2020 was released. On-air experience suggests FreeDV 2020 is less robust to low SNR and fading than the 700x modes, which means it can only be used on benign HF channels, with slow fading and a relatively high SNR,” Dr. Rowe explains.

“The goal of this project is to improve the robustness of 2020, and provide intelligible speech at the same operating point SNR as FreeDV 700E. In numerical terms, this can be expressed as the SNR where 700E achieves a coded bit error rate of 0.01, and a packet error rate (PER) of 0.1.”

Among the modifications made and tested are the addition of clipping to the modem waveforms, which Dr. Rowe says “should improve vanilla [FreeDV] 2020 straight away,” a new 2020A mode which offers an unequal error protection scheme to operate at lower SNRs, a 2020B mode with fast fading designed to be “usable in European Winter (or over the South Pole Argentina to Australia,” and index optimisation of the LPCNet vector quantiser.

“We have indeed improved the robustness of FreeDV 2020, waveform compression seems to be the most useful innovation. This can simply be applied to the existing 2020 mode with no compatibility issues. No new mode is required,” Dr. Rowe concluded following testing.
“We have shown 2020 providing intelligible speech at SNRs close to 700E, although in these tests sync was a bit slow. 2020B can handle fast fading channels, however I’m not convinced the partial protection techniques used in 2020A/2020B are worth it. The residual errors are annoying, even at high SNRs.”

Dr. Rowe’s full write-up is available on the Rowetel website.

Viol Tailor’s increasingly popular uSDR lightweight general-purpose software defined radio software package for Windows has received an update to v1.5.0, bringing in a range of new features including one designed to avoid the loss of interesting signals from the waterfall view.

In its latest release, uSDR – which is designed to be lightweight and portable – introduces an option to retain the full history in the waterfall view, which its author states is a “very great option” and means that the user won’t “lose any rare signals.” At the same time, an option to lock device frequency when zooming is added – again, to make it less likely you’ll accidentally switch frequencies.

Other changes include improvements to the graphical user interface, a CTCSS decoder, a passband IQ recorder, a passband IQ TCP server designed for remote processing tasks with C/C++ source code samples for clients included, an advanced audio player, band plan visualisation with a simple text format configuration, and “a lot of bug fixes.”

The software is, as always, available to download on SourceForge as freeware; the source code, however, has not been published.

“[HDLC] doesn’t use individual 64kbps E1 timeslots like in ISDN,” Harald explains, “but it aggregates the entire 31 timeslots of the E1 link (except for TS0) into one fat HDLC pipe. It is customary to either put raw IP packets, or Ethernet packets, or PPP frames or even Frame_Relay into that HDLC. These method of operation is supported by a variety of routers from the 1990ies.

The OCTOI TDMoIP project aims at carrying E1 circuits over IP networks with increased efficiency, as a means of providing connectivity for vintage communications hardware. More details are available on the OCTOI wiki.

Harald has also highlighted another retro-networking effort, led by Osmocom developer “jolly”: Software-Defined Uk0, “a new project for implementing the central-office side of the ISDN U (Uk0 in Germany) interface using a sound card with 192kHz sample rate. Using this setup,” Harald explains, “you can connect an ISDN NT for BRI (NTBA in Germany) to your sound card, and provide ISDN services via mISDN.”

Information on the new project is available on the Osmocom Retronetworking wiki,” though Harald warns that “there is no real documentation yet on how to reproduce this.

Wired’s Lily Hay Newman has penned an article on “hacker shenanigans” which saw a decommissioned satellite used to broadcast a television signal – although permission was, thankfully sought first.

“At the ShmooCon security conference in Washington, DC on Friday, embedded device security researcher Karl Koscher raised questions about a different phase of a satellite’s life cycle: What happens when an old satellite is being decommissioned and transitioning to a ‘graveyard orbit,'” Newman writes.

The answer: the ability to use the still-functional hardware for unintended purposes. “While the researchers could still talk to the satellite using special access to an uplink license and transponder slot lease,” Newman reports of the Anik F1R, which is due to be moved to graveyard orbit soon, “Koscher had the opportunity to take over and broadcast to the northern hemisphere.”

The signal: a livestream from the ToorCon San Diego hacker conference. “Technically, there are no controls on this satellite or most satellites – if you can generate a strong enough signal to make it there, the satellite will send it back down to the Earth,” Karl told Newman.

The full article is available on Wired’s website now.

Ham radio operator Paul Timkovic has showcased an unusual antenna designed to be field portable – by virtue of being made from a rollable steel tape measure.

“I had an idea to use a tape measure as the radiator of a portable antenna,” Paul explains in the videos showcasing the project, “so therefore I give this [the] name End-Fed Half-Wave Multiband Antenna [EFHW Antenna]. Why would I like to use this kind of antenna?

Paul used a 10mm-wide 50m-long steel tape measure as the basis for the antenna, which was built for use with the 80 meter band – meaning the half-wave antenna needed to be 40m, with 10m left in reserve. Following the antenna’s construction, Paul took it on the road for testing – with excellent results.

Paul has published the build video and testing video to his YouTube channel.

Finally, for now, researchers at the Georgia Institute of Technology have developed a new, highly-flexible solution designed to address the issue of bulky antenna arrays for next-generation beyond-5G services – based on 3D-printed tile-like devices.

“Typically, there are a lot of smaller wireless network systems working together, but they are not scalable. With the current techniques, you can’t increase, decrease, or direct bandwidth, especially for very large areas,” explains Manos Tentzeris, project lead and senior author. “Being able to utilize and scale this novel tile-based approach makes this possible.”

The team’s hardware is based on 3D-printed tiles which are assembled onto a flexible material, allowing them to be attached in quantity to a range of surfaces and objects – even, Manos claims, to the underside of an autonomous drone as a means of delivering additional network bandwidth to low-coverage regions.

Because each tile is identical, and simply assembled in a modular fashion to make up the final antenna array, the team claims that mass-manufacturing is simplified and that large quantities are easily produced – and just as easily replaced, should they become damaged during use.

“The tile-architecture’s mass scalability makes its applications particularly diverse and virtually ubiquitous. From structures the size of dams and buildings, to machinery or cars, down to individual health-monitoring wearables,” Manos envisions. “We’re moving in a direction where everything will be covered in some type of a wireless conformal smart skin encompassing a communication system or antenna that allows for effective monitoring.”

The team’s work has been published under open-access terms in the journal Scientific Reports.