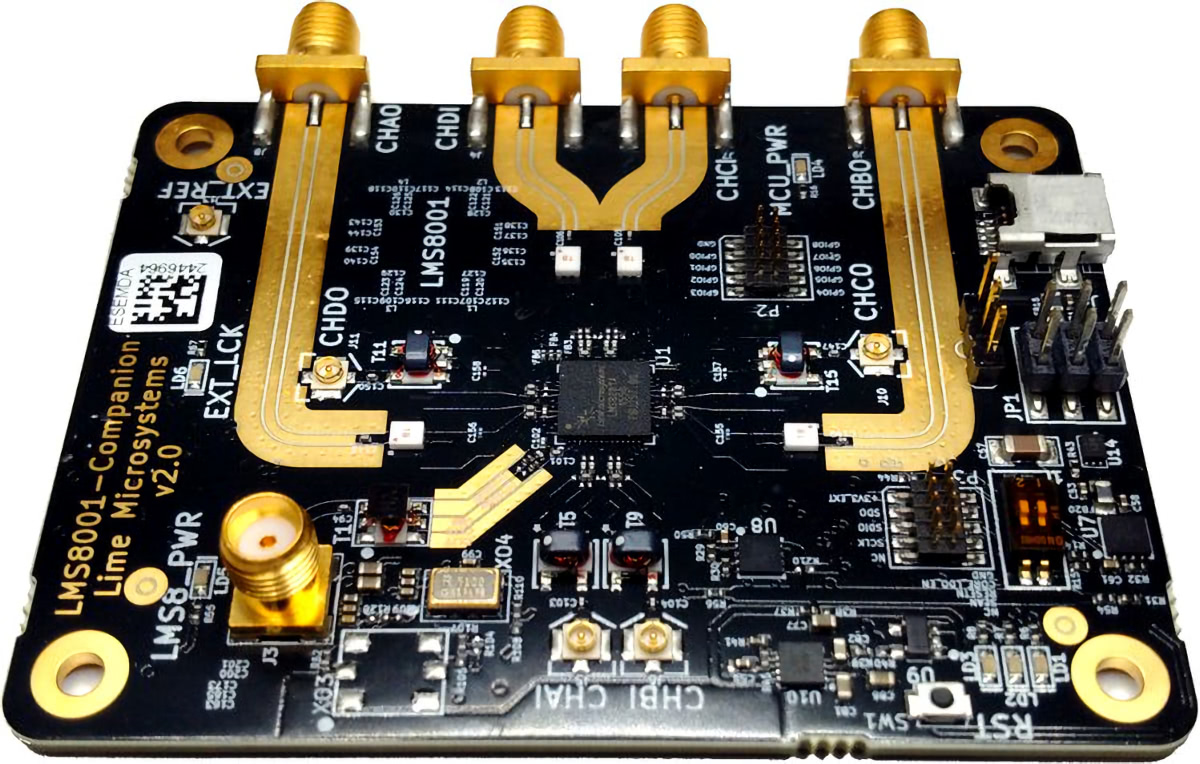 The LimeSDR family now has a new accessory in the LMS8001 Companion Board, an add-on designed to extend the frequency coverage up to 10GHz.

To launch alongside the LimeSDR Mini later this year, the LMS8001 Companion Board features a four-channel frequency shifter compatible with any version of the LimeSDR family. When connected, the accessory board will allow the frequency range to be extended up to 10GHz – and, depending on task, potentially beyond.

Full details on using the LMS8001 Companion Board are available from the documentation, including gain measurements from 2GHz through to 11GHz, while units from the first production run of 150 boards can be ordered for $299 each on the Crowd Supply page.

The LimeSDR Mini campaign itself continues to excite with new demonstrations of the device’s capabilities, including Wi-Fi signal analysis, LuaRadio FM reception, and even radio control via Scratch on a Raspberry Pi 3.

Part of the crowdfunding campaign for the LimeSDR Mini, which is set to reach over double its $100,000 goal when it closes this weekend, the demonstrations offer real-world examples of the low-cost software defined radio’s capabilities. The Raspberry Pi demonstration is particularly compelling, showing that the low-cost single-board computer pairs well with the low-cost SDR – albeit for narrowband applications only – and the custom-made ScratchRadio extension to the MIT Media Lab’s popular blocks-based programming language to help drive down the cost of SDR-based education.

For those interested in the LMS8001 Companion Board, meanwhile, a two-board demonstration shows how to use a LimeNET Mini as a Long Term Evolution (LTE) cellular base station, upshift the signal to 5.5GHz, send it across a room, then downshift it again. “In this demo,” Andrew Back explains, “we can see video streaming live between two handsets registered to the LimeNET LTE base station, via the 5.5 GHz repeater link, all without the sort of optimisations that you might have in production use, such as additional filtering, gain control, and power amplification.”

The LimeSDR campaign runs for the next three days, with the first boards scheduled to ship at the end of the year.

Karl Woodward’s LimeSDR Made Simple series continues this week with a guide to completing the amplitude shift keying (ASK) example from the previous instalment.

Building on the previous guide, which walks the reader through setting up a LimeSDR or LimeSDR Mini as a source in osmocom, creating a DC blocker, a “multiply const.” block, an RMS block, an “add const.” block for DC offset, a clock recovery module, and a binary slicer for data recovery, Karl’s latest entry in the series analyses the captured data and works to build a transmission flow.

“It’s all well and good knowing what the data is to turn our Brennunstuhl device on or off,” Karl explains, “but without a method to transmit this it does us no good.”

“For the IoT to reach its forecast potential, an ability to deploy devices on a massive scale is a key enabler,” says Geoff Mulligan, chair of the LoRa Alliance. “The enhancements introduced today advance the LoRaWAN protocol, further opening up the ecosystem, enhancing interoperability and expanding the reach of existing LoRaWAN networks.”

A survey released by Silver Spring Networks this month points to growing interest in mesh radio networks to support the deployment of smart meters and other smart-city innovations.

Following the survey of 350 utility companies, 65 percent reported that they had plans in place to deploy mesh radio networks to support field area networks (FANs) for distribution automation, fault detection, and the use of Advanced Metering Infrastructure (AMI) smart meters within the next decade. The radio networks won’t be alone, however: 74 percent of respondents were also looking at implementing fibre-optic wired networks.

“These results show us that utilities are looking ahead to proactively prepare for the future needs – including connecting distribution automation, renewable energy, smart grid and smart city assets – for improvement in service and reliability,” claims Matt Smith, senior director of grid management at Silver Spring, of the survey.

The Defense Advanced Research Projects Agency (DARPA) has announced the teams who will be taking part in its Software Defined Radio Hackfest, which serves as the finale to a year-long SDR community programme.

The eight teams – from the Southern Methodist University-in-Taos, Aerospace Corporation, Hacker DoJo, Raytheon BBN Technologies and SSCI, Assured Information Security, the Universities of California at Irvine and Los Angeles, Fat Cat Fab Lab, and Parsons Corporation – will take part in a challenge to control an unmanned aerial vehicle (UAV) through a series of operations. Known as the Hackfest Missions, the event is to take place in November, while during that week DARPA will run a hacker space with 30-minute sessions on SDR technologies.

“At the end of the Hackfest we hope to see new solutions to problems, better use and development of tools that expand the capabilities of everyone, and the build-up of new relationships with parts of the science, engineering, and technology communities that we have not interacted with before,” says DARPA Microsystems Technology Office (MTO) programme manager Tom Rondeau of the event.

Finally, members of the eHam.net have been in a spirited discussion on the benefits or otherwise of automatic antenna tuners, with both sides making impassioned points.

Following a query from a member as to whether an automatic tuner could ever be as precise as a manual tuner, various members came forth with their personal experiences and opinions. “Computers are told when it’s good enough,” says KC4ZGP. “Some humans are happy with good enough, some humans are not.” K0UA counters: “[The LDG Z11Pro2 autotuner] works very well. Very fast, pretty precise. Maybe a human could do better with a manual tuner. I have used several manual tuners in the past, I have built them in the past. They are sometimes “fiddly”, but you learn after a while how to find a good match pretty quick. But not as quick as an autotuner.”

Cameron Hunt is no stranger to software defined radio, but his latest project is something quite different to most: a home command centre for emergency communications.

“When the forecast for Hurricane Imra put Tampa, my city, right in the centre of the eye, I thought I could leverage my existing equipment to help coordinate communication for family and friends in and around Tampa,” Cameron explains. “A goTenna to communicate with my in-laws during the storm, and to attach to a drone post-storm to pick up LoS [Loss of Signal] messages from friends in the neighbourhood; a HackRF and RTL-SDR for trunk radio (unitrunker 2.0 beta, GQRX) to keep track of local fire/emergency services, electric company repair coordination post-storm; and a VHF handheld with VHF vehicle mount as a self-hosted repeater.”

That impressive setup grew, as with most radio enthusiasts’ rigs, from humble beginnings. “I started in SDR using an RTL-SDR to plot aviation positions on a map,” Cameron recalls. “Watching the whole ecosystem around SDR grow since then has been exciting, and to be able to participate and experiment has given me a great level of satisfaction. I was attracted by the creative potential of SDR, and to how helpful to realise how much diversity in RF exists, even in the ‘age of the Internet.'”

A LimeSDR sits at the heart of the command centre, and for one simple reason: “The possibility of having my own femtocell,” Cameron explains of his picking the LimeSDR. “My in-laws live within 250 metres of my house, and the idea that they could use their cell phones to communicate with me was compelling.”

“Trunked radio was surprisingly comforting in providing clues as to the perception of emergency services as to the severity of the effects of the storm,” says Cameron of the project’s efficacy. “Although at one point in the evening traffic dropped off as the emergency service providers themselves were told to shelter in place and not to respond to *any* calls. Nothing like feeling completely cut off from help in the middle of a city!”

For future SDR initiatives, Cameron wants to see the barrier to entry lowered. “SDR needs more pre-packaged software capabilities,” he opines. “Myriad’s work at providing drivers and apps as Snaps is brilliant. I’d like to see the same approach from the open mobile work (OpenLTE, etc).”

For those just getting started, some simple advice: “Make sure you match your first few projects to your technical skill level. There are great graphical software packages out there that are easy to install and get running,” Cameron offers. “Just make sure to keep your initial focus on fun and exploration. Personally, I focus on Open Source software and a Linux-based operating system – more difficult, more fraught with configuration error, but a much broader spectrum of experiments and capabilities.”

Finally, asked the traditional Focus On ‘failure’ question, Cameron laughs. “Nothing I can talk about without legal representation,” he jokes.