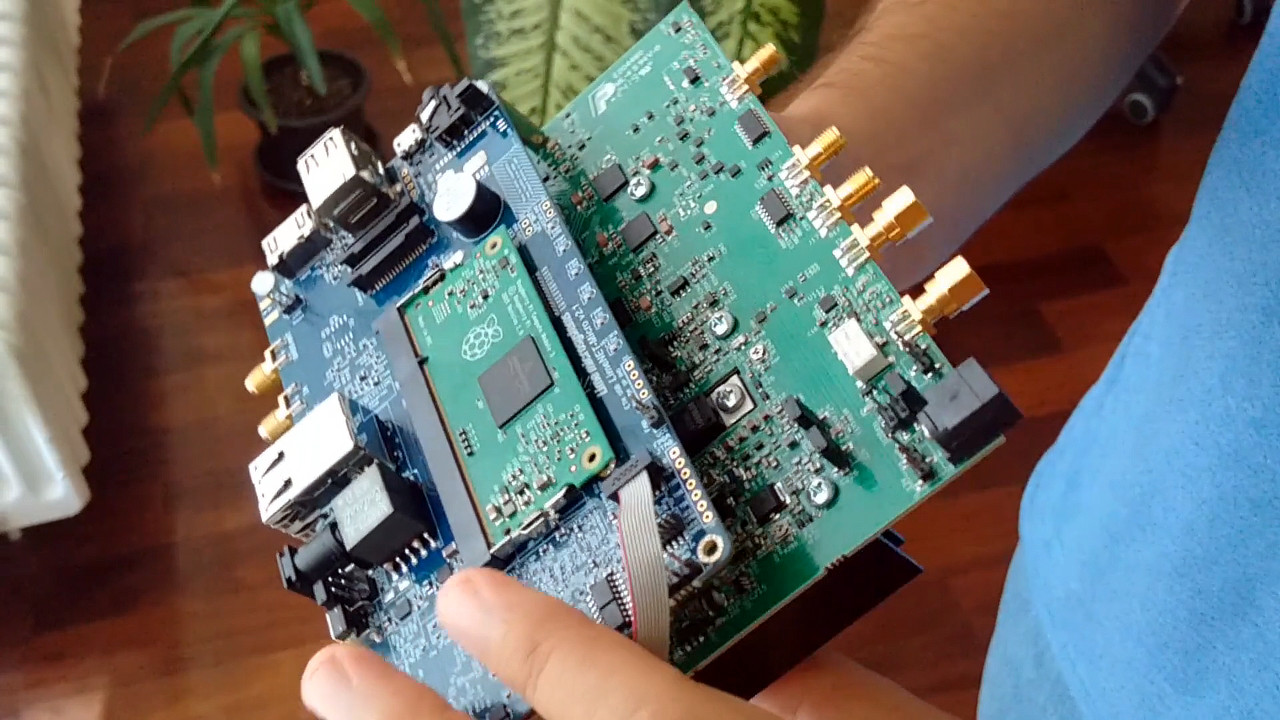 The LimeRFE crowdfunding campaign has a new, lower-cost option: the same programmable software-defined front-end board but without the components needed to operate in cellular bands, as an alternative for radio amateurs.

“We’ve had some enquiries as to whether it would be possible to make a reduced cost version of LimeRFE that doesn’t have support for cellular bands,” explains Lime Microsystems’ Andrew Back. “In response to which we’re pleased to announce that we’ll be making 50 boards in this configuration, with campaign pricing of $449 and post-campaign pricing of $549. Once these are gone, they’re gone and we presently don’t plan to make additional boards without support for the full complement of bands.”

The new lower-cost LimeRFE boards are available to back now on the project’s Crowd Supply page.

Daniel Estévez, meanwhile, has been working with an early LimeRFE unit, and has written up his efforts at enlisting it for Weak Signal Propagation Reporting (WSPR) use.

“The LimeRFE is intended to work as an RF frontend for the LimeSDR family, although it can work coupled with any other SDR or conventional radio,” Daniel writes. “As such, it has power amplifiers, filters and LNAs designed to cover the huge frequency range of these SDRs. It is designed to cover all the Amateur radio bands from HF up to 9cm, and a few cellular bands.

“So far I am liking the LimeRFE,” Daniel continues, after a successful test WSPR transmission and I think that the concept is a great idea. It seems that a LimeSDR plus a LimeRFE is already able to be used for real world amateur radio activities, and not just as lab equipment.”

Daniel’s full write-up can be found on his blog.

Community member Ogün Levent has shared his LimeSDR-powered project as part of the Field Report Contest: the Dronesense spectrum-scanning jammer and control system.

“[Dronesense] started when I was a senior in University. My graduation project involved drones, and, as I got more familiar with the technology, I started to realise how easily drones could be used by individuals with bad intentions,” Ogün explains. “I started researching what sorts of countermeasures existed and soon discovered ground-based, anti-drone rifles. These are equipped with a scope for visually detecting drones and a directional antenna for then jamming their signal (allegedly up to 1200 meters away).

“My research soon revealed that there was a problem with the detection part of this type of countermeasure, it’s dependant on human vision. In the course of further research on drone detection, I discovered Software-Defined Radio and I had an idea: if I could make a unit that could detect drone remote control signals, there would be no need to rely on fault-prone human vision.”

The result is a drone which carries two LimeSDR USBs, a single-board computer, a 2.4 GHz jammer, a GPS module, and a flight controller with software based on GNU Radio. Videos are available on YouTube, while Ogün’s full write-up can be found on the Crowd Supply campaign page.

Elsewhere in the community, Martin Troyer is working on adding functionality to the LimeSDR’s on-board field programmable gate array (FPGA) – starting with a one-shot trigger feature.

“Currently I’m working on the implementation of some additional features on the FPGA. First, I created an interface between LimeSDR and Matlab that allows me to manually configure the transceiver chip and the FPGA board with the Matlab software so I can then analyse and visualise the received data,” Martin explains. “One of these features on the FPGA should be a single-shot trigger, which should start the transmission of the signal at a certain threshold.

While Martin’s initial code encountered a problem – “I can’t start the transmission after the signal reaches the threshold and let it continue,” he explains – a recent reply offers an alternative which begins capturing samples when the trigger is fired and does not stop until reset.

Martin’s post can be found on the Myriad-RF forum.

Hacker Gadgets has unveiled a new case for the LimeSDR Mini, featuring fins and a fan for improved cooling over the company’s earlier design.

Hacker Gadgets’ original aluminium case for the LimeSDR Mini, which used the body of the case as a passive heatsink, was launched back in May 2018. The company began work on a revised design earlier this year, showing off a 3D printed prototype in early July and the aluminium version last week.

A short video of the fan, which sits on top of the case and blows air over the heatsink fins, can be found on Twitter. No launch date has yet been provided.

Salil Tembe has published an article on using GNU Radio and a LimeSDR Mini as a radio-frequency (RF) source for testing circuits in a home lab.

“Operating all the way from 10 MHz to 3.5 GHz, this SDR can serve as a RF source while testing your circuits,” Salil writes. “Remember that this is a makeshift RF source for those who don’t own one, such as myself. This is going to prove quite useful to me while doing my experiments.

Salil’s short write-up explains how to create a simple GNU Radio schematic made of four blocks – Signal Source, QT GUI Range, QT GUI Frequency Sink, and the LimeSuite TX Sink block for communication with the LimeSDR Mini itself – followed by testing with the Tektronix RSA306B spectrum analyser. “Alternately,” Salil writes, “you could also use the LimeSDR Mini itself to observe the signal it generates by plugging in a RX block in the schematic.”

The full article is available on Salil’s blog, Nuclear Rambo.

During a balloon launch late last week, The Things Network users set a pair of records for farthest successful transmission under using LoRaWAN technology. The first record was set by Jose Manuel Cuesta using a probe fitted with three 3D-printed Moxon antennas a a stabilisation reaction wheel, which successfully transmitted over a distance of 741 kilometres.

This record stood less than a day, however, with Enrique Torres own probe succeeding in transmitting over 766 kilometres, despite the weather having prevented the Diana 1 probe and its balloon from reaching its target altitude.

Both balloons were launched as part of the Servet project, a citizen science initiative designed to encourage experimentation through payloads attached to weather balloons. More information is available on the TTN blog.

X-Labz’ creation is based on a circuit board featuring the Atmel ATSAMG55 32-bit microcontroller, an SX1278F30 LoRa radio module on the 446 MHz frequency, and a firmware which encodes and decodes the audio using the free and open-source Codec2 standard at 1,600 bits per second (bps). The hardware is enclosed in a custom-made 3D-printed case designed in Autodesk Fusion 360.

Full details of the project were not available at the time of writing, but X-Labz has previewed the hardware via Twitter.

RTL-SDR has drawn our attention to a project by Jean-Michel Friedt to turn an oscilloscope into a GNU Radio compatible software defined radio source.

Based on a project by Jean-Michel and colleagues Weike Feng, Grigory Cherniak, and Motoyuki Sato, in which terrestrial DVB receivers were repurposed as software defined radio hardware for passive bistatic radar, Jean-Michel’s latest software adds support for using a range of oscilloscopes as an SDR source in GNU Radio.

“Tested on Rohde & Schwarz RTO2034 and RTE1054, will most probably work on any RT series oscilloscopes. Originally developed for the Agilent 54855DSO but not tested after adding support for R&S instruments,” Jean-Michel writes. “For those wanting to test gr-oscilloscope with no hardware access, a TCP server generating dummy data (sine waves) is available in examples.”

The software is available now on Jean-Michel’s GitHub repository, under the GNU General Public Licence 3.

The Radio Society of Great Britain (RSGB) has announced a Build A Radio workshop for young budding radio amateurs, to take place on Tuesday the 6th of August 2019 at historic Bletchley Park.

Designed for young people getting their first taste of electronics and radio as a hobby and potential new career, the workshop will see attendees given an introduction to the core concepts behind wireless communication, radio signal propagation, and electronics, before being walked through the process of building a functional MW receiver – the cost of which is included in the £7 ticket price, with adults charged £8 if accompanying a child under 16.

More details are available on the Bletchley Park website.

Daniel Estévez has shared details on the reception and decoding of Lucky-7, a Czech amateur 1U CubeSat launched early last month, including has addition of support in the gr-satellites utility.

“Lucky-7 is a Czech Amateur 1U CubeSat that was launched on July 5 together with the meteorological Russian satellite Meteor M2-2 and several other small satellites in a Soyuz-2-1b Fregat-M rocket from Vostochny,” Daniel writes. “The payload it carriers is rather interesting: a low power GPS receiver, a gamma ray spectrometer and dosimeter, and a photo camera. It transmits telemetry in the 70cm Amateur satellite band using 4k8 FSK with an Si4463 transceiver chip.

“After some work trying to figure out the scrambler used by the Si4463, I have added a decoder for Lucky-7 to gr-satellites. This post shows some of the technical aspects of the decoder.”

Daniel’s full analysis is available on his blog, while more information on Lucky-7 itself can be found on RTL-SDR.

“It takes considerable volunteer effort and real dollars to keep Amateur Radio in Space,” AMSAT president Joe Spier told members late last month, as reported by ARRL. “AMSAT has several fund-raising needs. The daily operation of AMSAT is accomplished by donations to the General Fund. The other main department needs are the fund for GOLF 3U CubeSats design/construction and Amateur Radio on the International Space Station (ARISS).”

AMSAT has been responsible for the launch of AO-92 (Fox-1D) and AO-95 (Fox-1Cliff), the latter of which the organisation is still trying to bring online since its launch last year. “AMSAT partnered with Spaceflight Inc. by contracting and paying for these launches,” says Spier. “Fundraising for Fox-series satellites has not yet recouped this expenditure, so donations are still being accepted.”

Details on how to support AMSAT and ARISS, either through donations of money or expertise, can be found on the ARRL blog post.