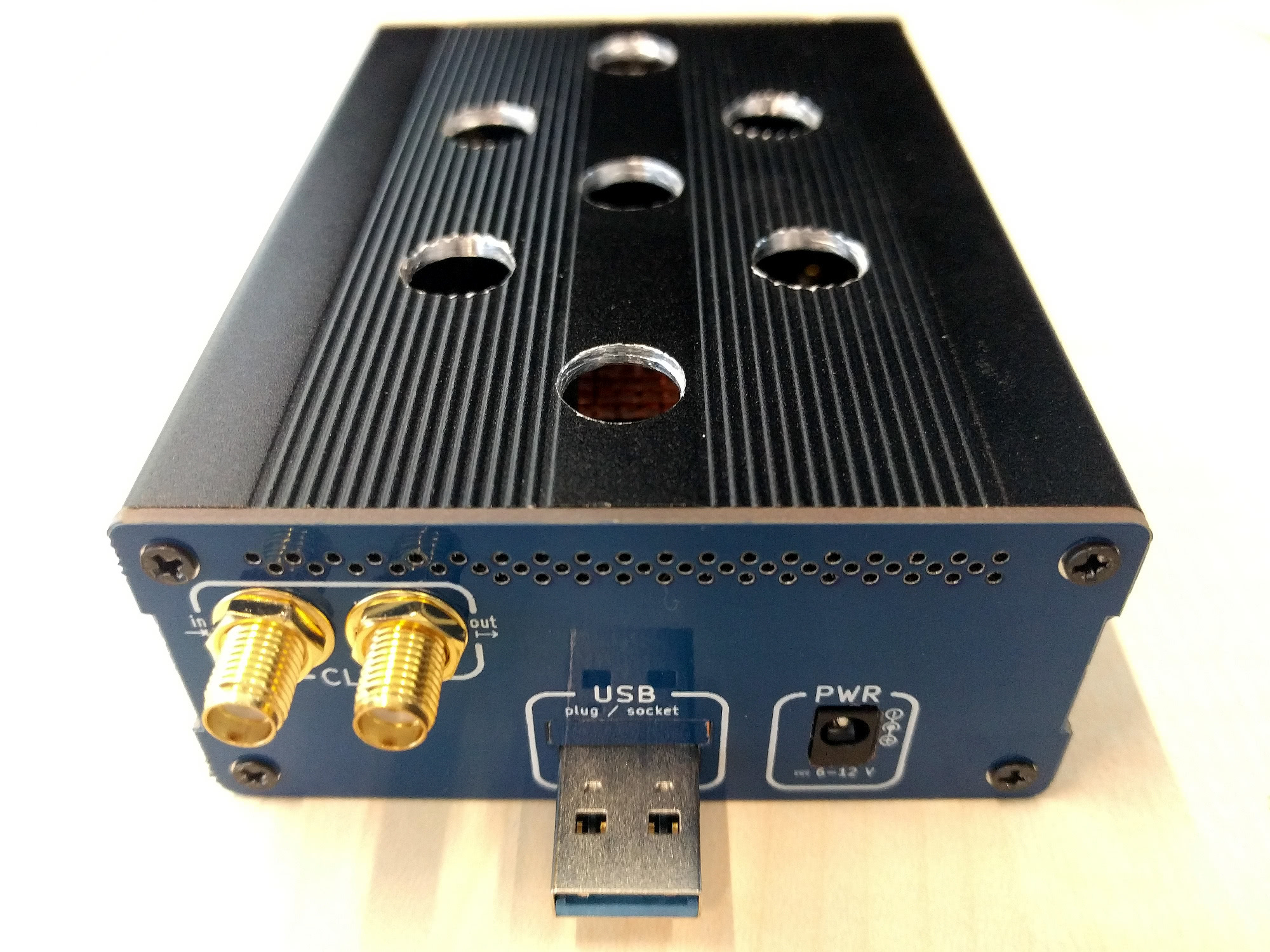 Anyone looking for an attractive and functional housing for their LimeSDR boards should take a glance at this forum post from user cde, who has penned a small review of the casing and panels designed by luftek last year – and has detailed a few modifications he made to improve the board’s performance to boot.

First unveiled in all their glory by designed luftek in August last year and released on this GitHub repository, the ‘luftek case’ is proving popular. In cde’s review, the design was praised for its low cost and easy installation – bar a small issue with the size of the power supply input cutout. To boost performance, cde also discussed the use of a thermal pad under the LimeSDR’s LMS7002D software defined radio chip to transfer heat to the metal chassis – though found holes drilled in the top improved cooling performance still further.

Elsewhere in the MyriadRF forum, Tegwyn Twmfatt has written about the testing of PCB-mounted microwave band pass filters using a LimeSDR and GQRX software.

Detailed in full on a Hackaday project page, the microwave duplex band pass filters are part of Tegwyn’s ongoing efforts to build a signal repeater capable of receiving cellular telephone signals from a large outdoor antenna and rebroadcasting them inside a building via smaller antenna, while the LimeSDR is used to test their functionality through GQRX’s handy fast Fourier transform (FFT) waterfall.

The GNU Radio project has announced two new releases, launching the final bug-fixes for version 3.7.10 and a new feature release in the form of version 3.7.11.

GNU Radio 3.7.10.2 is the last release of the 3.7.10 branch, and includes bug-fixes only including fixes for issues with the GNU Radio runtime, the companion, filters, blocks, the QT-based GUI, and portability issues when running the software on Windows, among others. GNU Radio 3.7.11, by contrast, is a feature release, and includes the latest updates to the application programming interface (API) and core software including support for dynamically-loaded GNU Radio installs, vector types in embedded Python blocks, improved performance in the ATSC transmitter and DVB-T decoder, relative phase plots in the fast Fourier transform display, and the deprecation of various outdated blocks – meaning anyone upgrading should check that they’re not relying on any of the missing blocks before upgrading to 3.7.11.

AMSAT, the North American amateur satellite organisation, discussed using LimeSDR for transmitting DVB-S2 video – an episode of animated sci-fantasy comedy Adventure Time, to be specific – in a weekly report from earlier this month, along with initial spectral analysis and noise measurements for the board.

Overall, three tests were carried out: Charles Brain G4GUO demonstrated using the LimeSDR to broadcast live video via DVB-S2, while Paul KB5MU and Michelle W5NYV were the ones to broadcast a pre-recorded episode of Adventure Time. Mike Seguin N1JEZ, meanwhile, announced details of a spectral analysis of the LimeSDR, along with rudimentary noise measurements – though he concludes that he needs more real-world tests to draw any concrete conclusions.

In more industrial-scale radio news, EE News Europe reports on the results of a massive MIMO field trial carried out by BT, National Instruments, and the Universities of Bristol and Lund, with initial results showing a tenfold improvement over traditional Long Term Evolution (LTE) systems.

The team’s trial centred around a so-called ‘massive’ multiple-input multiple-output (MIMO) system boasting 128 individual elements operating at 3.5GHz. Based on a commercial-scale software defined radio (SDR) platform from National Instruments, the trials showed considerable promise: in both indoor and outdoor trials, the results suggested that spectral efficiency of up to 100 bits per second per hertz (100b/s/Hz) could be achieved at scale – ten times better than current LTE systems for the same spectral slice. Previous tests had shown a fivefold increase, suggesting there is still room for improvement in massive MIMO design.

Canonical’s Maarten Ectors, meanwhile, is confident that software defined radio (SDR) is only the beginning, predicting that the Internet of Things (IoT) will lead the way in what he describes as “software defined everything.”

“While in many applications the notion of ‘software defined everything’ is somewhat blue-sky, in some areas of the IoT, the prioritisation of software over hardware is rapidly becoming a reality. One such area is software defined radios. As we move into 2017, projects such as the LimeSDR represent the first wave in a whole new generation of software defined devices,” claimed Ectors, writing for New Electronics from his position as Canonical’s vice president of IoT. “From digital signage to drones, the future of the IoT will be increasingly driven and defined by software rather than hardware.”

Finally, the GNU Radio Blog has a fantastic write-up on the use of software defined radios to track rockets, as a way around the so-called “COCOM limits” which cause off-the-shelf GPS receivers to deactivate above certain speeds and altitudes.

Based on multiple posts made to his SDR GPS blog, Philip’s post details the need to use an SDR-based solution to bypass the artificial restrictions put in place on off-the-shelf GPS units which prevent the gathering of useful data during rocket tests, various issues encountered during the development process, and the discovery of noise during flight which needed to be corrected using band pass filters, before finally being able to track from ground to apogee – filling in the gaps the commercial GPS receiver had left in the data.