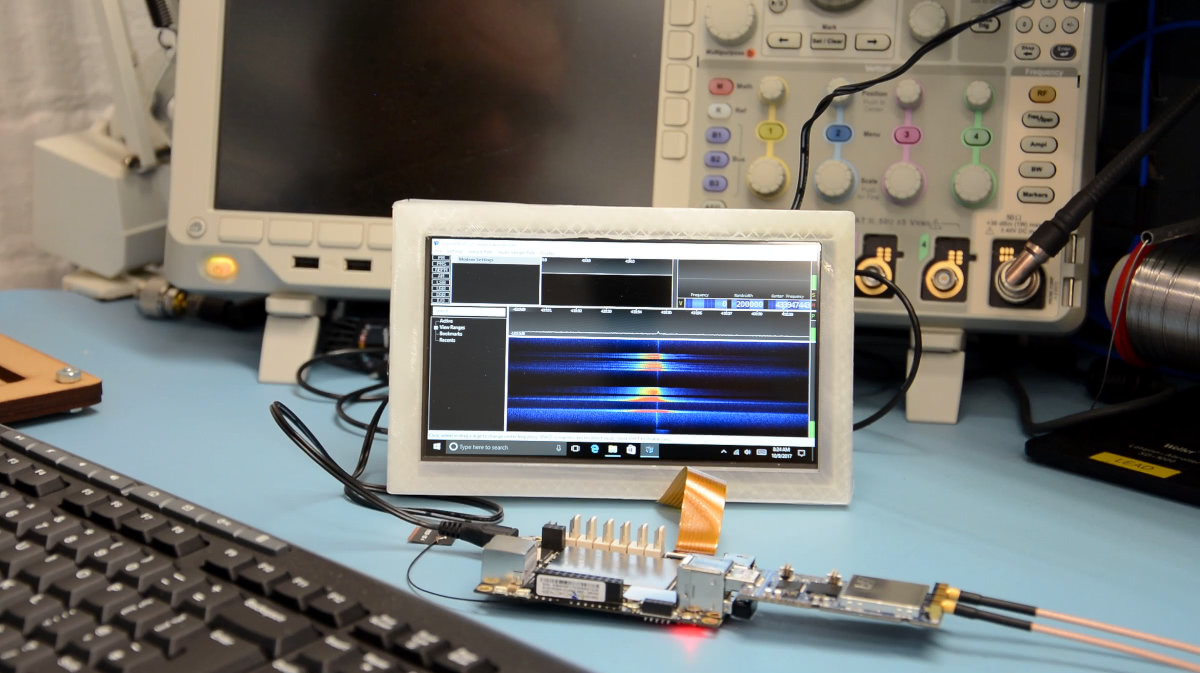 If you’re looking for an in-depth deep dive into digital radio and the inner workings of the LMS7002M and LimeSDR you’ll want to look out for Dr. Danny Webster’s Wireless Masterclass series, the first of which has been uploaded to YouTube.

Based on presentations from the LimeSDR Workshop held back in March in partnership with the BCS Open Source Specialist Group and the Open Source Hardware User Group, Danny’s videos begin with an introduction to core digital radio concepts and will move on to the internals of the LMS7002M and LimeSDR, radio link considerations, and more advanced topics in due course.

Those eager to get stuck in can view the presentations themselves via GitHub, while subsequent videos will be uploaded as and when editing is complete.

More video entertainment can be found on the LimeSDR Mini crowdfunding campaign page, where Karl Woodward has been taking the new low-cost SDR through its paces.

The brain behind the LimeSDR Made Simple series currently running on the main blog, Karl’s videos investigate the use of the LimSDR Mini using three software packages: GNU Radio, Pothos, and CubicSDR – the latter running on the low-cost LattePanda Windows 10 single-board computer (SBC).

The LimeSDR Mini campaign has just over two weeks left on the clock, and has so far raised 157 percent of its $100,000 funding goal – meaning production is now guaranteed.

The Myriad RF forum is currently playing host to a discussion on the merits and tricks to making your own antennas, following a request for information on the subject from a new LimeSDR user.

Described, fairly, as a “Pandora’s Box” topic, the thread has already surfaced a wealth of useful information for anyone interest in the topic – including recommended reading, the inverse relationship between frequency and size, and the signal-to-noise considerations when dealing with information-dense signals. Those with their own advice on the production of an antenna capable of receiving as wide a frequency range as possible, in particular focused on the lower half of the megahertz spectrum, are invited to throw their opinions onto the pile.

Over on the eHam.net forum there’s a discussion regarding tricks and tips for hunting down a source of radiofrequency interference (RFI), manifesting itself as a loud humming noise localised to the original poster’s neighbourhood.

While tracking down RFI sources can be tricky, the members’ advice on the topic is sound and ranges from the creation of a directional loop antenna tuned to the frequency of worst interference to map out the neighbourhood, shutting off circuit breakers in the house to rule out local electrical issues, and using a portable AM radio. Another important tip is that noise sources can be surprisingly small: one user posts of two small mobile phone battery chargers which were throwing out enough high-frequency noise to be easily detectable outside the house.

Communications specialist Intelsat and chip maker Intel – no relation – have jointly filed a comment with the US Federal Communications Commission (FCC) (PDF warning) requesting that portions the 3700-4200 MHz C-band currently reserved for satellite communications be freed up for 5G cellular networks.

“Incumbent C-band FSS [Fixed Satellite Service] operations consist of dozens of space stations, thousands of earth stations, and numerous well-established customer relations, making use of this spectrum for new terrestrial mobile services challenging. At the same time, the propagation characteristics as well as global 5G development plans make the 3700-4200 MHz band highly valuable and attractive for terrestrial mobile use,” the pair explain in their comment submission. “Although Intelsat and Intel disagree over certain aspects of enabling terrestrial mobile operations in the 3700-4200 MHz band, they agree that the following joint proposal best serves the interests of all stakeholders in the near and long term and is far preferable to the other alternatives proffered in the NOI (Notice of Inquiry).”

That proposal takes the form of “market-based incentives for FSS space station incumbents to undertake voluntarily the complicated and costly process of clearing portions of the C-band downlink spectrum in specific areas across the country, thus opening the way for coordinated terrestrial use as rapidly as possible.” The proposal includes the promise of minimised risk of interference to existing FSS earth stations, but the FCC has not yet responded.

Hackaday has a published a write-up on a portable cellular network created as part of a college security course and making use of a low-cost software defined radio module.

Created by students Matthew May and Brendan Harlow for Champlain College’s SEC-440 course, the project sought to create a private and secure portable cellular network which could be used in emergency situations. Based on a Raspberry Pi single-board computer and the Nuand BladeRF x40 SDR, the system allows for SIM cards to be programmed through a connected writer and then inserted into off-the-shelf smartphones for connection to the network.

In real-world testing, the pair were able to demonstrate a 60′ non-line-of-sight and 100′ line-of-site range without the use of multiple base stations or amplifiers. A full guide to the system, including the use of the YateBTS software which powered the base station, is available on the project GitHub repository.

The SWLing blog has a request for someone to create a device to remodulate digital spectrum data back into analogue RF for injection into a real tabletop radio, creating a far more flexible version of the tape-based ‘radio time machines’ often used for receiver demonstration and education.

“The device Mark [Fahey] and I dream of would convert digital spectrum files–from a WinRadio, Perseus, Elad, SDRplay, Airspy, or other SDR–into analogue RF any radio with an external antenna port could tune,” explains SWLing’s Thomas Witherspoon. “How cool would it be to take a spectrum recording from 2008, play it through your Hallicrafters SX-100, Kenwood R-1000 or Alinco DX-R8T, and tune through the 31 meter band? You’d receive Radio Australia, Radio Bulgaria, Radio Netherlands Worldwide, Radio Canada International, Voice of Russia and many other broadcasters that are no longer on the air. Indeed, there’s a strong possibility you might uncover DX you didn’t catch when the recording was first made.”

“I’m enough of a radio geek to know that I would thoroughly enjoy travelling back in time once in a while with a classic radio. Additionally, this device would make it much easier for museums to create kiosks where visitors could tune through recordings of, say, important events in history.”

Suggestions for how to most easily and cheaply achieve this are welcomed on the SWLing blog.

Finally, Chris Summer and Jens Wirth have been showing off their LimeSDR experiments on Twitter: receiving weather satellite data and recording the spectrum of a microwave oven.

Chris’ outlined map image will be immediately familiar to anyone who has played with weather satellite data before, right down to the noisy parts where the signal wasn’t quite captured. Where Chris’ reception differs is in the use of a home-made antenna, which targets the analogue-based NOAA-18 satellite.

Jens, meanwhile, has been investigating how adding different materials to the inside of a microwave oven can change it frequency response, posting a fascinating graphic captured with the LimeSDR which shows the spectrum of the microwave empty, with a glass inside, and when the glass is filled with water – demonstrating that not all SDR projects involve sending or receiving what you might think of as ‘traditional’ radio signals!