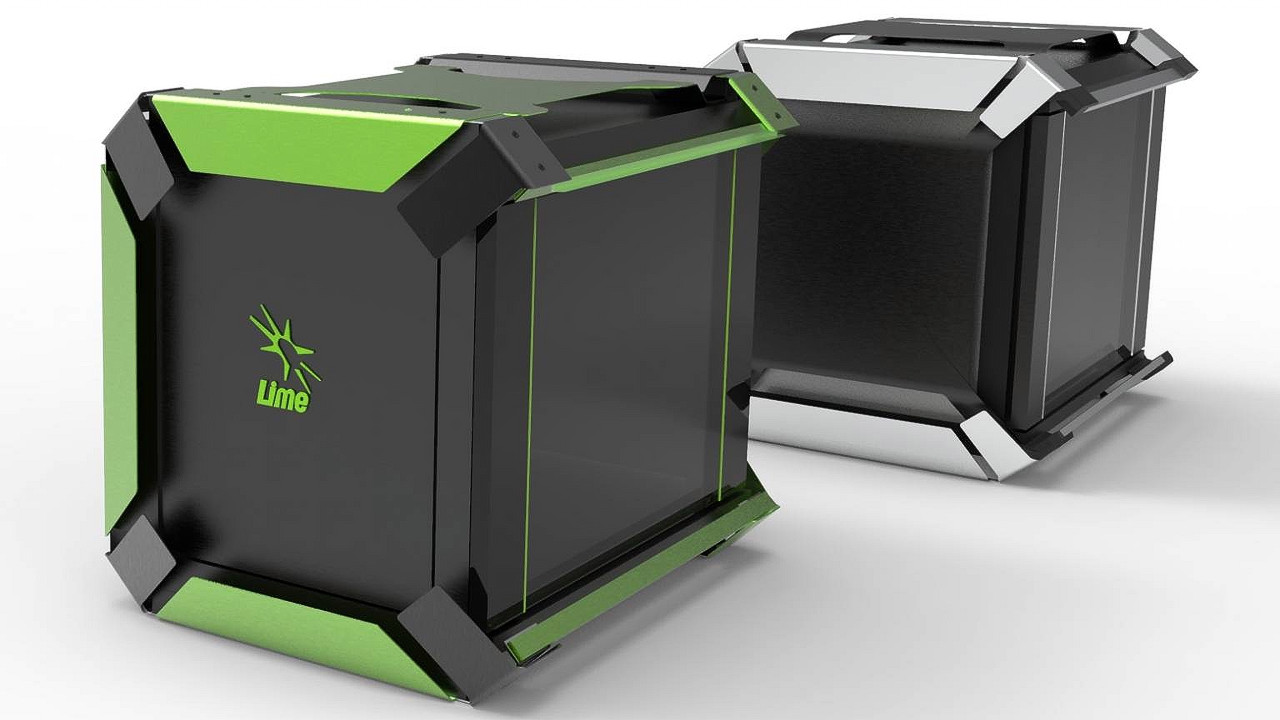 “We are excited to collaborate with Lime Microsystems and the LimeNET ecosystem,” said AMD’s senior director of applications engineering Kun-Yip Liu of the project, “to enable innovative and high-performance 5G edge services running on AMD Ryzen and embedded processors.”

As with previous LimeNET designs, the drivers, application programming interface (API), and board design will be released via GitHub under an open-source licence. More information is available on the Lime Micro website.

“[It is] able to perform input IQ streaming, base band and pass band recording, play back, demodulation, spectrum and waterfall visualisation, animated spectrum navigation, fast zoom and pan. Most of [the] parameters (input frontend, audio device, sample rates etc.) may be changed on the fly, no application hang-up or restart. Under development and a lot of features coming soon.”

The software is available to download now from SourceForge, Viol has not, however, released the source code.

Cuba has been accused of jamming the amateur radio spectrum following anti-government protests in the nation – tracked and monitored by a network of software-defined radios.

“I noticed the interference covering a lot of the [40-metre] band,” California based Josh Nass told IEEE Spectrum of the issue. “Then I had individuals reach out to me, Cuban-Americans living around the country but a lot of them out of Miami, and they said ‘we think there’s a coordinated jamming effort going on.'”

“The response has been real strong from the people who talk to Cuba, but some people couldn’t care less [as long it doesn’t affect them],” adds Alain Arocha in an interview with the site, “but this is making that part of the spectrum unusable. It gives me a sense of frustration for people not to give a damn about this.”

The American Radio Relay League (ARRL) has indicated that it has “no real role” in policing the matter, but advises those affected to report interference through the International Amateur Radio Union.

More information is available in the IEEE Spectrum article.

“This competition aims to get some of our most creative minds helping the UK safely and securely deliver the amazing benefits of 5G for people and businesses,” claimed Matt Warman, minister for digital infrastructure, at the announcement. “It is a major part of our plans to harness the country’s tech prowess, open up the telecoms market, and create new jobs and investment as we build back better from the pandemic.”

“Today’s announcement is another positive step in driving forward the UK’s telecoms diversification agenda, with concrete action to help support the development of innovative new products for our mobile network infrastructure,” adds director of markets at techUK Matthew Evans. “It is a clear signal that the UK has a world-leading market in which to innovate and invest, as well as spurring the opportunity for UK tech companies, SMEs and academia to take advantage of this growing global market.”

The competition will see technology and telecoms innovators submitting proposals for projects designed to fast-track commercially viable open RAN products, with a share of the £30m prize pot up for grabs. The government has indicated proposals “could include exploring issues around power efficiency, the management of radio wave spectrum resource, the availability of advanced software platforms, systems integration, and security.

Details on how to submit a proposal are available on the competition website.

“An SDR time board provides the clock distribution for all receiver and transmitter ADCs/DACs and the FPGA to work synchronously,” Simon explains. “This internal time board consists of an oven-controlled crystal oscillator (OCXO) that delivers a very stable (5 parts/billion) and accurate 10-MHz signal.

“Such oscillators also offer high frequency stability, a low noise floor, and the low phase noise required for accurate timing and synchronization of functions. The unmatched frequency stability of this oscillator makes the SDR clock ideal for applications with strict timing requirements, such as GNSS systems.

“The availability of a built-in clock system enables engineers to save time and resources, thereby cutting the overall cost of implementing, testing, and deploying complex systems. In addition, the SDR’s clock system offers impressive timing accuracy, and its performance is comparable or even superior to fully external clock systems.”

Researchers at the Georgia Institute of Technology, working with colleagues at Nokia Bell Labs and Heriot-Watt University, have boasted of a “breakthrough” in backscatter communications – promising a future of “near-zero-power” Internet of Things (IoT) devices running at “5G speeds.”

“Our breakthrough is being able to communicate over 5G/millimetre-wave (mmWave) frequencies without actually having a full mmWave radio transmitter,” explains first author Ioannis (John) Kimionis, PhD. “Only a single mmWave transistor is needed along much lower frequency electronics, such as the ones found in cell phones or WiFi devices. Lower operating frequency keeps the electronics’ power consumption and silicon cost low. Our work is scalable for any type of digital modulation and can be applied to any fixed or mobile device.”

“Throughout my career I’ve looked for ways to make all types of communication more cost-efficient and more energy-efficient,” adds Emmanouil (Manos) Tentzeris, Key Byers Professor in Flexible Electronics at Georgia Tech. “Now, because the whole front end of our solution was created at such low complexity, it is compatible with printed electronics. We can literally print a mmWave antenna array that can support a low-power, low-complexity, and low-cost transmitter.”

The paper on the team’s work has been published in Nature Electronics under open-access terms.

A team from the US National Institute of Standards and Technology (NIST) and Wavsens LLC have announced a means of using radio signals to create images and video of hidden and moving objects – in real time.

“Our system allows real-time imaging around corners and through walls and tracking of fast-moving objects such as millimetre-sized space debris flying at 10 kilometres per second, more than 20,000 miles per hour, all from stand-off distances,” explains Fabio da Silva, project lead.

“Because we use radio signals, they go through almost everything, like concrete, drywall, wood and glass. It’s pretty cool because not only can we look behind walls, but it takes only a few microseconds of data to make an image frame. The sampling happens at the speed of light, as fast as physically possible.”

Dubbed m-Widar, for microwave image detection, analysis, and ranging, the technology has a potential range of several kilometres – possibly more – and is based on the concept of transient rendering. The team hopes to see the technology being used to help firefighters and first responders find escape routes or trapped victims.

The team’s paper is available in Nature Communications under open-access terms.

“We achieved this by using multiple flexible NFC coil antennas embedded in ordinary and irregularly shaped surfaces, like furniture and carpets, that we interact with in smart environments,” Swarun Kumar, assistant professor of electrical and computer engineering, explains of the project, which allows woven fabrics to track conductive materials – including the human hand.

“It was a fun collaboration between material scientists who helped us with the textile-friendly antenna fabrication and a combination of wireless system development and signal processing. Our goal is to integrate these sensors in our everyday lives, which will contribute to an overall smart environment.”

The technology could be used, its creators claim, to allow for volume control by waving your hand over a couch cushion or to turn lights on and off by tapping a pillow.

More details on the project are available on the WiTech Lab website.

The GreatScott! YouTube channel has published a video showing a back-to-basics approach to wireless communication, building a “super-simple” transceiver using amplitude modulation (AM).

“In this project we will keep it simple when it comes to wireless audio communication,” channel creator Scott explains. “Instead of trying to use an nRF24 or RF modules, we will go back to the old days in which they used AM radios. I will show you how such amplitude modulation works and along the way show you how to build a super simple AM transmitter and receiver.”

The full video is available on the GreatScott! YouTube channel now.

“One particular reason why VoLTE calls are important is that 2G and 3G networks are phased out in various regions,” the UBports team writes. “For instance, in the US Verizon customers can no longer activate new devices without VoLTE capabilities.

“T-Mobile has already shut down its 2G and 3G networks, AT&T will shut down these networks in early 2022 and Verizon will do the same by the end of 2022. If by that date your device (and operating system) doesn’t support VoLTE, you can’t make any calls any more.”

To solve the problem, UBports commissioned sysmocom – founded by the creators of the OpenBSC and Osmocom open-source telephoney projects – to investigate adding support, and to come up with a plan of attack.

“Sysmocom’s proposal is to start adapting the Doubango IMS framework for VoLTE, with vendor-specific support for the Volla Phone,” UBports explains. “When this first implementation for the phone’s MediaTek modem is ready, it’s likely to work for other MediaTek devices too with no or only a few adjustments. Afterwards, the open source IMS implementation could be extended to work with other modem vendors.”

More information on the work, including a link to sysmocom’s official report and the promise that sysmocom’s work on VoLTE support will be “a true open-source project,” can be found on the UBports blog.