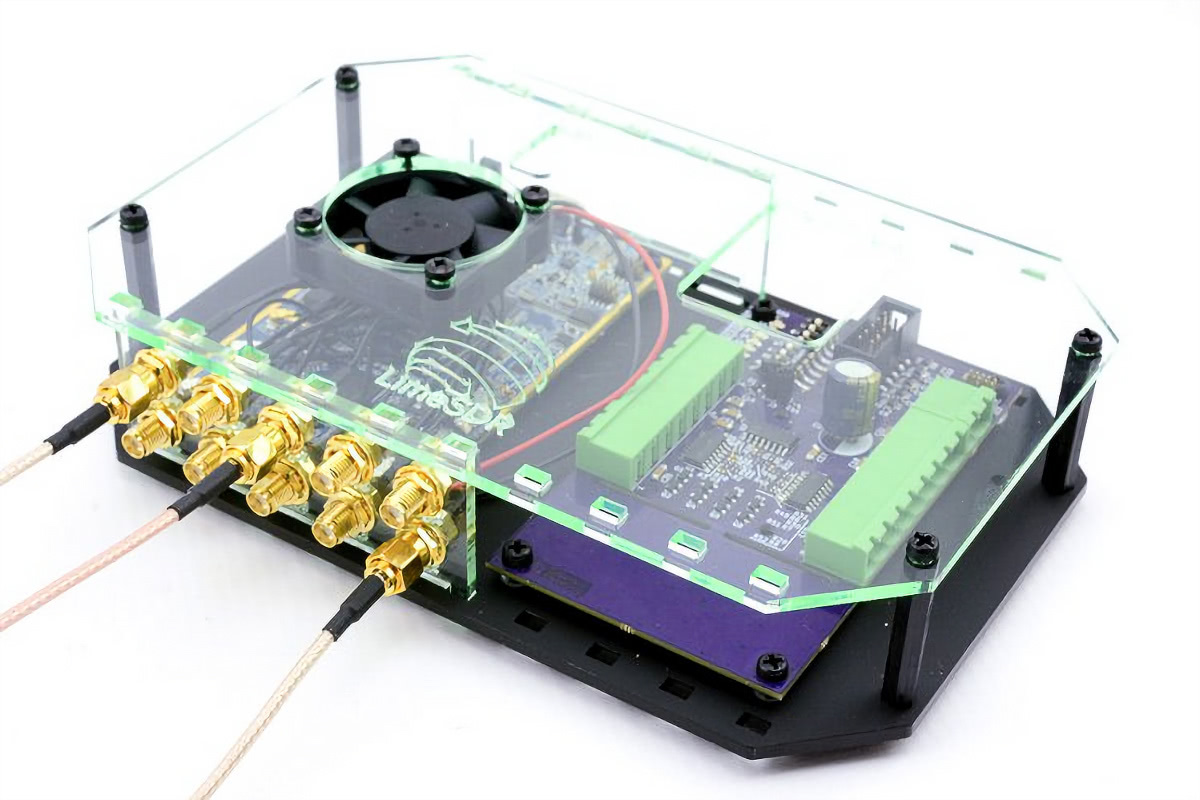 The LimeSDR Mini crowdfunding campaign, launched earlier this month, is off to a flying start and is already over 130 percent funded with over 30 days still left on the clock – and now includes support for an external clock source.

Designed to be fully compatible with the LimeSDR ecosystem but in a smaller, more affordable form factor with one TX and one RX channel, the LimeSDR Mini has proven popular. The initial batch of 500 Early Bird models, priced at $99, sold out within the first day, and the campaign now has over 130 percent of its funding goal raised – meaning that production is guaranteed to go ahead.

Since the campaign launched, engineers have been listening to feedback and comments with the result that the LimeSDR Mini now includes a U.FL connector for use with an external clock source, allowing multiple LimeSDR Minis to be synchronised to a common clock. The latest campaign update, published earlier this week, includes links to the PCB design and manufacturing files and the FPGA gateware sources – the LimeSDR Mini being, like the LimeSDR, open hardware.

The campaign has a month left to run, with the first boards due to ship at the end of the year.

Also on Crowd Supply are two new accessories for the full-size LimeSDR: the GPIO Board add-on and the compatible Hacker Case.

As the name suggests, the GPIO Board gives the LimeSDR general-purpose input/output (GPIO) capabilities, linked to the on-board field-programmable gate array (FPGA). The board itself provides bi-directional logic level shifting between 1.2 and 5.5V for eight GPIO pins, with each receiving a high-voltage high-power Darlington drive stage good for 30V at 300mA on pins 0-4 and at 200mA on pins 5-7. The pins are entirely under the user’s control, and can be used for anything from relay control for RX/TX switching to filter selection – and anything else you could put your mind to.

The Hacker Case, meanwhile, is designed to hold both the LimeSDR and the GPIO board side-by-side, with SMA connectors for all RF ports – including clock connections – and a 40mm cooling fan over the LimeSDR. Open sides provide full access to to the GPIO Board for ease of wiring as well as enhanced airflow to further reduce operating temperatures.

Pre-orders for the GPIO Board and Hacker Case are open now, priced at $169 and $79 respectively, with shipping scheduled for the end of December 2017.

On the topic of small boards, Marty Wittrock has shared his experiments with linking a LimeSDR to a LattePanda single-board computer (SBC) using the SDRAngel software.

“The LimeSDR operating on receive on the 30m Shortwave Band using SDRAngel running on a Windows 10, 64-bit, 4G (RAM) 64G (Flash) operating at 1.8 GHz LattePanda, the smallest functional Windows 10 PC on Earth with USB 3.0 resources,” Marty explains of his project. “No kidding, this makes my MSI ‘hockey puck’ PC look monstrous. The LattePanda is slightly smaller in size as my LimeSDR and a very powerful little PC, too. I’m incredibly impressed with this tiny PC.

“This Single Board Computer also has an integrated Arduino processor and associated GPIO on-board such that all the band-switching and other functions required to make a Software Defined Transceiver will be very trivial to add-in. The ‘proof of concept’ is complete: this shows that it can be done to make the LimeSDR into a compact, wideband Software Defined Transceiver that can be run on a car battery if needed.”

Coupled with the official 7″ LCD and capacitive touch-screen overlay, Marty has been able to create what he hopes will become a self-contained and fully-mobile HF/VHF/UHF amateur radio transceiver. “I hope that story gets others motivated to do what I’ve done with the LattePanda because it rocks with the LimeSDR and is a natural extension for making a real nice transceiver,” he writes.

Now in its sixth instalment, Karl’s latest entry in the series dives into more depth on ASK itself, determining the carrier frequency, and dealing with capturing the signal using Pothos then regenerating it with GNU Radio to build an ASK sampling device. “On a side note: recording ASK transmissions can be fun,” Karl warns, “but it should go without saying, please use this for good not evil!”

RTL-SDR has brought our attention to Marcin Jakubowski’s iqToSharp utility, a handy tool for SDR# enthusiasts which can convert raw IQ files into the waveform format expected by the software.

Published under the permissive MIT Licence, Marcin’s iqToSharp is a simple cross-platform C program which, when compiled, takes a raw IQ file and converts it to the waveform format used by the closed-source SDR# software. Although designed for use with IQ files captured via the rtl_sdr command-line tool, Marcin’s iqToSharp should be of use to anyone moving between SDR# and other utilities.

Stefan Scholl has published details on the use of software defined radios to determine the precise location of a transmitter, demonstrating the efficacy of his technique using three low-cost receivers based around Raspberry Pi single-board computers and RTL-SDR modules.

“This article first provides a short introduction to localisation with TDOA [Time Difference of Arrival],” explains Stefan of his write-up and related video presentation. “Second, it presents a simple experimental localisation system based on three receivers, each consisting of a RTL-SDR USB-Stick and a Raspberry Pi. Although the receivers and the overall setup are very simple, localisation of transmitters works remarkably well.”

Using TDOA calculations, Stefan has been able to determine the locations of a number of unknown transmitters in his area, mapping them out with considerable accuracy – and suggests the use of a fourth receiver unit to provide height information as well as longitude and latitude.

The Institute of Navigation (ION)’s Global Navigation Satellite System (GNSS) Software Defined Radio Metadata Standard Working Group has called for public comments on the proposed standard, running through to the 31st of December this year.

“The GNSS SDR Metadata Standard defines parameters and schema to express the contents of SDR sample data files,” the Working Group explains. “The standard is designed to promote the interoperability of GNSS SDR data collection systems and processors. The metadata files are human readable and in XML format. A compliant open source C++ API for reading metadata and binary samples is also officially supported to promote ease of integration into existing SDR systems.”

The standard itself is available in DocX and PDF format on the Working Group’s GitHub repository, while public comments can be submitted through the official website.

Arizona State University’s student-run news outlet The State Press has published details about efforts at the University to build a radio ground station based on SDR hardware in an effort to give students more hands-on experience.

“It’s hard to believe, but it’s not uncommon for electrical engineers with their masters or even PhDs to have never soldered a board before going into the field,” electrical engineering senior Christopher Marrs told the site. “This a key project. It shows that we can take theory and put into actual application.”

The team’s ground station, based around unspecified SDR hardware, will be used to communicate with an ASU CubeSat miniature satellite carrying out a search for water on the moon’s south pole. “It’s very rewarding,” added electrical engineering junior Nick Altman. “Its fun to see that something you built is going into space or communicating with something on the moon.”

Finally, robotics specialist Servosila has announced a new ground-based robot equipped with a choice of software defined radio modules, dubbed the Radio Engineer, capable of everything from acting as a truly mobile base station to waging electronic warfare.

“Several of our key customers had asked us to enable an Electronic Warfare (EW) or Cognitive Radio applications in our robots,” a company spokesperson explains in the announcement to press. “By integrating a Software Defined Radio (SDR) module into our robotic platforms we cater to both requirements. Radio spectrum analysis, radio signal detection, jamming, and radio relay are important features for EOD [Explosive Ordnance Disposal] robots such as ours. Servosila continues to serve the customers by pushing the boundaries of what their Servosila robots can do. Our partners in the research world and academia shall also greatly benefit from the new functionality that gives them more means of achieving their research goals.”

The heart of the robot is an Intel Core-i7 based computer in a weatherproof housing connected to the user’s choice of SDR module and running GNU Radio. Other sensors fitted to the robot include GPS, an internal measurement unit (IMU), and a thermal vision camera. The first models are due to ship in October, the company has announced, with more information available on the official website.