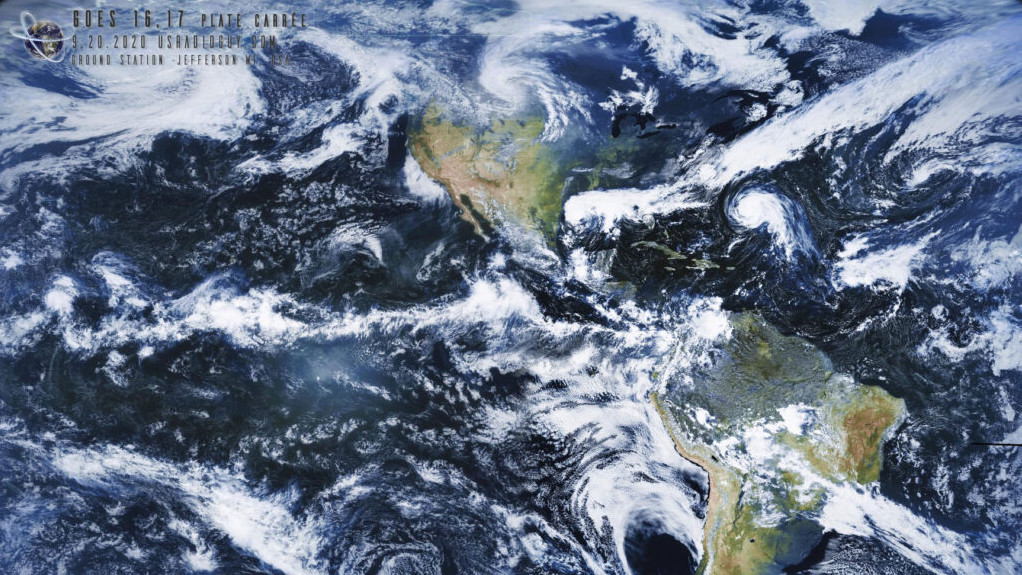 The open-source srsLTE cellular communications suite has hit version 20.10, bringing new functionality including mobility functions and performance-enhancing PHY changes – and a range of bug-fixes, too.

The srsLTE 20.10 release brings with it a new logging framework alongside initial NR PHY layer and stack components. The srsENB package receives Mobility – Intra eNB and S1 – functionality and RRC Re-establishment functionality, too, while the UE PHY layer is non-blocking and PHY pre-calculations have been replaced with speedier on-the-fly routines to boost performance.

The new release also includes a range of bug fixes, including a fix for QAM256 support in srsENB, alongside general stability improvements and enhancements to overall performance across the software. For LimeSDR users, Lime Microsystems contributed improvements which remove unnecessary calibration steps and fixed a bug where two or more channels could have different antennas despite being explicitly set in the configuration file.

The latest version of srsLTE is always available on GitHub, under the GNU Affero General Public Licence 3.0.

At the same time, Lime Suite has also been updated to 20.10 – bringing its own selection of bug fixes and feature updates, including thread priority setting for improved performance in timing-sensitive applications.

Of particular note in the list of Lime Suite 20.10 improvements is new explicit thread priority setting for USB processing, FIFO, and remote thread operations – improving performance for cellular and other timing-sensitive applications, providing Lime Suite is running with high enough privileges to set the priority.

Lime Suite has also received a build-time configuration option to simplify gain configuration, while also addressing calibration failures caused by incorrect gain settings. While moving to the new gain behaviour simplifies things, however, it may require applications to be modified if they relied on configuring TIA/IAMP gain elements using the old system.

Other changes include the ability to change the over-the-wire data format in the API and via Soapy, to save users having to modify it in-application, and fixes for SXR and SXT calibration errors. Many changes will also improve srsLTE operation on Lime Devices – and Lime Micro is soliciting feedback from anyone using Lime Suite 20.10 and srsLTE 20.10 in the field.

The latest release is available now on the GitHub repository, under the Apache 2.0 licence.

Silesian University of Technology student Ritankar Sahu has published a paper detailing a theoretical and practical approach to using GNU Radio with the LimeSDR platform, which can serve as a brief introduction to the topic.

“GNU Radio is a free and open source software framework to develop and implement various types of signal processing system in the form of hierarchical blocks,” Ritankar writes in the paper’s abstract. “It can simultaneously be used with either external RF-FPGA hardware to create Software Defined Radio (SDR) or in a simulation-like environment.

“A very fundamental SDR application can be created using an SDR hardware and GNU Radio to visualise and evaluate any type of RF signal present in the environment. One really easy to use hardware may be LimeSDR for that purpose, as it has a great frequency response and huge bandwidth. In the software part as stated, GNU Radio can do the rest with which different features of the signal can be displayed, measured and evaluated.”

Ritankar concludes that LimeSDR represents “a real good platform to make any type of GNU radio application.” The full paper is available on ResearchGate.

LuaRadio v0.8.0 has officially released, bringing with it a range of new blocks for tasks including frequency modulation, preamble sampling, and Manchester matched filtering, as well as improvements to its core application.

The core application now supports multiple shared library name candidates, which has been used to add alternative candidates to a range of sinks and sources for a better experience when running LuaRadion on Debian Linux and derivatives, support for copying the input data type to the output in block type signatures, a refactoring of the CompositeBlock hierarchical block functionality, and comes with updated documentation.

The latest release is available on GitHub under the MIT Licence.

If that weren’t enough, GQRX has also been updated to version 2.13.2, bringing with it initial support for GNU Radio 3.9, fixes for a selection of bugs, a new stereo option for UDP streaming, boosted performance, and support for generating AppImage files for cross-platform use.

The latest release is the first to support GNU Radio 3.9, though the GQRX maintainers warn this support is “preliminary.” The new release also includes a Viridis colour map, support for stereo UDP streaming, improved performance in panadapter and waterfall modes, an updated RDS decoder, and an option to invert the direction of the mouse’s scroll wheel.

The release also fixes a range of bugs, including an error in FM de-emphasis which reduced audio volume by 20dB, a crash when launching the application with no device connected, a crash when setting invalid RF gain settings, and a crash when a source block doesn’t support IQ balancing. It does, however, have a bug of its own: a crash when the waterfall height is set to 100% is being worked on, and will be addressed in the upcoming 2.13.3 release.

The latest GQRX release can be downloaded now from GitHub under the GNU General Public Licence 3.0.

The latest release of SDR#, meanwhile, adds new plugins for co-channel cancellation on AM and FM signals – allowing interfering signals to be automatically removed.

“Experimenting with the Co-Channel Canceller,” developer Youssef Touil wrote during testing of the feature earlier this month. “Here the plugin is cancelling 594 kHz and letting 596 kHz thru. It’s workish, but still needs some polishing. The Co-Channel Canceller can also reject the dominant carrier to some extent and unbury the DX signals. Works also for broadband noise..”

Youssef initially added an AM co-channel canceller plugin to the SDR# platform, and quickly followed it with an FM variant. A full review, which showed impressive results, of the AM variant can be found on the SWLing Post. Both are live now in the public version of SDR# for general use.

Martin Bernardi has released a new version of the open-source NOAA-APT decoder, following the involvement of an additional contributor, adding in histogram equalisation, false colour, and rotation functionality.

Designed as an open-source alternative to the ageing WXtoIMG, NOAA-APT is designed to decode the APT image format transmitted by NOAA satellites. In its latest release, v1.3.0, the tool receives the ability to process images in false colour, histogram equalisation, and a number of bug fixes.

Elsewhere the tool also now rotates images in-place while leaving the calibration frames as they are, and gains the ability to guess the date and time of WXtoIMG files based on their filenames. Most of the new features, Martin admits, come from new contributor “Arcadie Z.”

The latest release is available on GitHub now under the GNU General Public Licence 3.0.

The LoRa Alliance has published the LoRaWAN TS1-1.0.4 Specification package, which it claims simplifies the development and deployment of LoRaWAN networks while boosting interoperability.

“One of the key goals of The LoRa Alliance has been the simplification of end-to-end deployment for the internet of things (IoT),” says Donna Moore, chief executive and chair of the LoRa Alliance. “Today, I am proud to announce we have achieved this goal with the release of the LoRaWAN TS1-1.0.4 specification.

“Our focus as we developed this update to the specification was to ensure that it would provide every element needed for easy development, certification testing, and deployment. This complete package will further accelerate mass IoT and support our members and end-users as they roll out their LoRaWAN solutions worldwide.”

Key changes in the new standard include the clarification of Class A RX window opening requirements, improvements and clarifications to the ADR behaviours including new backoff examples, an overview of MAC command handling and “persisted” MAC commands, a clarification on how to handle frames greater than the maximum frame length, and security features for counters and persisted parameters.

Igor Yetsevich has updated his Easy-SDR project, which aims to collect open-source designs for software defined radio accessories, with new hardware and redesigns ready for installation in standardised metal housings.

“I recently updated my project, fixed many bugs, finalized solutions, changed something, deleted something, added something new,” Igor explains. “The most interesting thing I’ve added so far: Most of the devices are now prepared for installation in a metal case measuring 80 x 50 x 20 millimetres; Completely redesigned [the] LNA design – now, Bias Tee powered amplifiers are housed in a 50 x 25 x 25mm metal case and have N-type connectors; Added an amplifier based on the PGA-103 microcircuit.

“Added the ability to install filters in final amplifiers (a separate printed circuit board, depending on the filter used); Added a new device – SPDT antenna switch for receiving antennas; The UP converter has been redesigned – [I] added intermediate buffer stage between crystal generator and mixer; RF lines in all devices were recalculated to correspond to the characteristic wave impedance of 50 Ohm; Reduced size of PI attenuator PCB.”

The designs, designed for simplicity of home manufacturing and assembly, are available on Igor’s GitHub repository under the MIT Licence.

Developer Carl Reinemann has published a guide to using Sanchez, a tool for combining imagery from multiple geostationary weather satellites into a single combined image, to ease newcomers into the project.

“Sanchez is a software tool that GOES, GK2A, Himawari, Electro Satellites to be combined, reprojected, projected stitched onto a globe, either creating a flat projected image, or by creating a ‘virtual’ satellite image at a given longitude,” Reinemann explains. “The new version has a ton of possibilities and allows geostationary satellite imagery to be projected in a Plate Carrée projection & allows stitching of multiple sats, GOES 16, GOES 17, GK2A, Himawari, etc,

“It is primarily for enhancing IR imagery onto static imagery such as ‘blue marble’ or even night views, but it really ups the game for geostationary satellite observation. And the code runs fast. I am already adapting it to reproject some of my sandwich layer imagery.”

Reinemann’s guide walks through how to use Sanchez to process single images, stich multiple images with automatic cropping, add time-lapse functionality, and how to edit the JSON file which defines settings for each satellite it can recognise. Finally, Reinemann walks through scripting the creation of an animation by putting everything together.

Finally, RTL-SDR has brought our attention to Simon Roses’ project to build your own “numbers station”, running entirely on a Raspberry Pi single-board computer with no external hardware.

“Numbers Station remain a great mystery to all,” Simon writes. “There is speculation about them being used by intelligence agencies in various countries. According to The Conet Project, the first Numbers Station was in World War I and they were very popular during the Cold War.

“The other topic is the use of Raspberry Pi, small computers that I personally use for all kinds of professional and personal projects (red team and blue team). I strongly recommend you to have several of these devices at hand. For my Numbers Station I used a [Raspberry Pi] version 3, but it works the same with version 4 or even a Pi Zero.”

Simon’s project uses a Python tool which turns the Raspberry Pi’s general-purpose input/output (GPIO) header, with just a length of wire as an antenna, into a basic FM transmitter. Dubbed PiNumberStation, the software – written by pseudonymous developer “korn101” – runs entirely on the Raspberry Pi with no external hardware.

Simon’s guide is available on his website, but comes with the following warning: “Do not interfere with radio stations in your area – I am not responsible for the misuse of this article, please check the legislation in your country.”