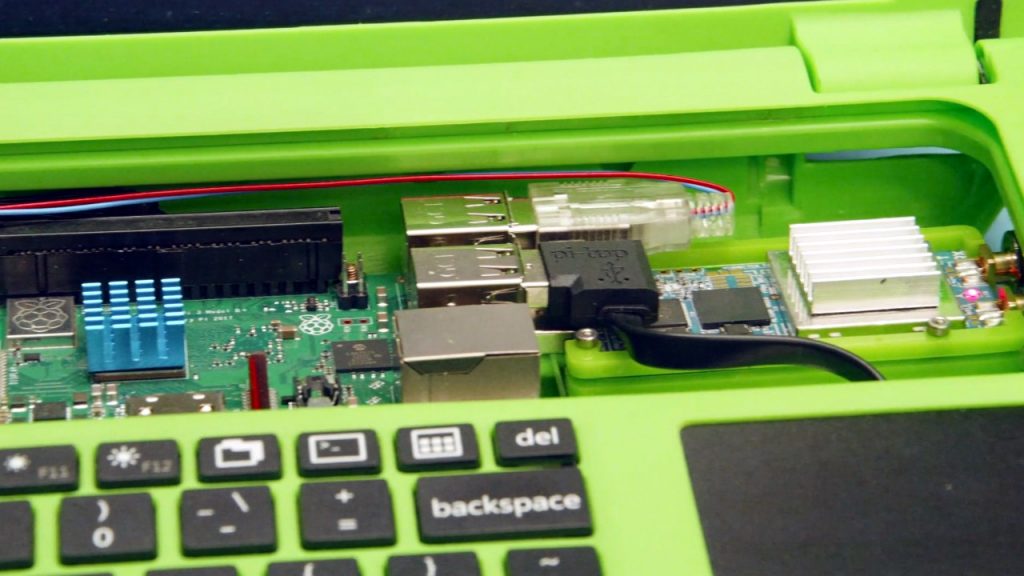 A video demonstrating the integration of a LimeSDR Mini with the modular, Raspberry Pi-based PiTop laptop has been released – and all it took was a few laser-cut parts.

“The PiTop is a rather cool modular laptop that you build yourself and which is based around the Raspberry Pi platform. Eminently hackable, we thought it would be fun to see if we could integrate a LimeSDR Mini for software-defined radio development on the move,” explains Andrew Back in the latest video update to the LimeSDR Mini Crowd Supply page. “In this short video we show how we achieved this with the aid of just a few custom laser cut parts and give a quick demo using the excellent SDRangel software to view 2.4 GHz spectrum.”

“Open Research Institute and Phase 4 Ground are honoured to be given the chance to put advanced software defined radio hardware like the LimeSDR Mini into the hands of active developers across the world,” writes ORI’s Michelle Thompson, who has been coordinating the distribution of the boards to Phase 4 Ground developers. “We are ready to help make the most of this very generous donation to open source space communications work.”

More details, including which developers received hardware and their plans for same, can be found on the Open Research Institute website.

The MarconISSta project, which has seen a LimeSDR sent up to the International Space Station, has published its first update of the new year – and admits to a rocky start.

“The MarconISSta outreach team had a slow start in 2019 and completely forgot to post any updates,” jokes project lead Martin Buscher, “but even the hardware preferred to start slow. Since there was no commanding scheduled between the holidays, MarconISSta entered a two-week autonomous operations period on December 20th 2018. Unfortunately, it did not wake up when ground control tried to access it two weeks later. It turned out that the device had randomly failed on December 29th 2018. Until crew time could be allocated on January 7th and the hardware could be revived, nine days of data have been lost. But it could have been worse. Thanks to CSA astronaut David Saint-Jacques for rebooting MarconISSta.

“After this bumpy start, MarconISSta finished an S band survey that was originally planned to be finalised during the holidays. Afterwards we did a UHF survey using different antennas to do some testing with the hardware, followed by a VHF survey this week.

“What’s next? Well, there is only little more than a month left before we will (temporarily) store MarconISSta. Besides an L/S antenna analysis that will be conducted some time in mid-January, we will focus on the UHF amateur-satellite for the next weeks and invite all of you to follow the slogan ‘All power to the ISS!’ and do some link tests from your ground station right into our receiving antennas,” Martin continues. “We will monitor the full range of 435 to 438 MHz. Best results are expected if you use constant carrier signal only with powers from 50W and at least 10 dBi antenna gain. But let’s find out what’s possible. If you do not use Doppler correction, we will try to track you and tell you where (approximately) your location is. Please let us know if you did some transmissions.”

The latest update, along with all previous updates, can be found in the official website. Those taking part in the transmission test are asked to post a comment on relevant update.

The latest release of the Osmocom Cellular Network Infrastructure (CNI) software stack introduces full support for the LimeSDR family, doing away with the need to chain through third-party applications including SoapySDR.

Released earlier this month, the new build of the Osmocom CNI – which pulls together various projects all aimed at running a fully-open cellular communications stack – features full native support for all LimeSuite-compatible devices, including the LimeSDR and LimeSDR Mini as well as the LimeNET family of all-in-one software-defined radio (SDR) and general-purpose processing (GPP) platforms. Previously, LimeSDR devices were only supported through a chain of third-party software.

“Those new tagged/released versions contain half a year of work since the previous versions released during summer 2018,” explains project maintainer Harald Welte of the latest builds which make up the CNI bundle. “The primary focus was on bug-fixing and stabilisation as well as some major new features, such as inter-BSC-handover support in osmo-bsc.”

The new Osmocom CNI is available now, with links in the official announcement.

Elsewhere in the world of open-source cellular communications, srsLTE has been upgraded to version 18.12 with a new ASN.1 RRC library and IPv6 support.

Other improvements made in the latest version include a refactored Evolved Packet Core (EPC) segment, new encryption support, and stability and performance improvements, all detailed in the change log.

The new srsLTE 18.12 build is available to download from the project’s GitHub repository under the GNU Affero General Public Licence 3, with pre-compiled binaries for Ubuntu Linux available on Launchpad.

SDR-Radio 3.0.4, also known as SDR Console, has also been released, bringing transmit support to LimeSDR devices on top of its existing receive support.

A popular choice for software defined radio tasks on Windows, SDR-Radio has been testing LimeSDR transmission support since December last year when developer Simon Brown added it to the code base. The closed beta period is now over, and the public SDR-Radio 3.0.4 release includes full transmission support for all LimeSDR-family devices.

The latest build is available now, free of charge, from the official website as pre-compiled 32-bit and 64-bit binaries.

Bluetooth 5.1, the latest version of the 2.4 GHz short-range radio standard, has been announced by the Bluetooth Special Interest Group (SIG), and brings with it centimetre-scale location and direction finding.

“Location services is one of the fastest growing solution areas for Bluetooth technology, and is forecasted to reach over 400 million products per year by 2022,” says Mark Powell, Bluetooth SIG executive director, of the decision to build new capabilities into the standard. “This is great traction and the Bluetooth community continues to seek ways to further grow this market with technology enhancements that better address market needs, demonstrating the community’s commitment to driving innovation and enriching the technology experience of users worldwide.”

“Since the introduction of Bluetooth Low Energy in 2010, developers have been able to leverage Bluetooth to create powerful, low cost location services solutions for a variety of applications spanning across consumer, retail, healthcare, public venues, and manufacturing environments,” adds Andrew Zignani, senior analyst at ABI Research. “The new direction finding feature can help Bluetooth better address the varied and evolving needs of the location industry, enabling more flexible, scalable and future-proof deployments that will further accelerate the adoption of Bluetooth for location services in existing markets, while unlocking additional business opportunities for new applications and use cases.”

The revised standard, which is available to download for Bluetooth SIG members now from the official website, is claimed to offer centimetre-scale location alongside angle-of-arrival and angle-of-departure (AoD and AoD) detection to five degrees.

RTL-SDR has highlighted a new home for the TETRA plugin for SDR#, previously distributed exclusively through forums.

The Terrestrial Trunked Radio (TETRA) plugin allows the popular SDR# software to decode TETRA digital voice signals through any SDR#-compatible receiver, without the need for third-party software. In its current release, the plugin includes the ability to receive BS-band signals with Pi/4-DQPSK modulation, automatic adjustment of the frequency, BS, ISSI, and GSSI subscriber information for open channels, and group filtering.

Features promised in future releases include the ability to display any encoded information from the network, rather than subsets of data, the decoding and display of SDS type-4 short messages, and to record audio – a feature present in the current release’s menu but not yet active.

The new home for the SDR# TETRA plugin is RTL-SDR.RU.

The US Defence Advanced Research Projects Agency (DARPA) has detailed a satellite launch scheduled for late February which will test a new membrane reflectarray antenna design which stows to a small size for launch and deploys fully once in orbit – and it’s dubbed the launch R3D2.

“The Department of Defence has prioritised rapid acquisition of small satellite and launch capabilities. By relying on commercial acquisition practices, DARPA streamlined the R3D2 mission from conception through launch services acquisition,” explains Fred Kennedy, director of DARPA’s Tactical Technology Office, of how the organisation was able to go through design and development to scheduled launch in just 18 months. “This mission could help validate emerging concepts for a resilient sensor and data transport layer in low Earth orbit – a capability that does not exist today, but one which could revolutionise global communications by laying the groundwork for a space-based internet.”

The Radio Frequency Risk Reduction Deployment Demonstration (R3D2) system is based around an antenna made from tissue-thin Kapton membrane, which packs into a tiny space for launch but unfolds to 2.25 metres in diameter once in low Earth orbit. The mission will test its deployment, survivability, and radio frequency characteristics, and if successful could mean that workloads currently requiring larger satellites could be shifted to smaller, more nimble, and more cheaply-launched satellites instead.

The launch is to take place in late February, and will be live-streamed on the Rocket Lab USA website.

The LoRa Alliance has announced a major milestone for the open LoRaWAN low-power wide area network protocol: deployments by more than 100 network operators covering around a hundred countries across the globe.

“Reaching this operator milestone is a major achievement for the LoRa Alliance,” says Donna Moore, chief executive and chair of the LoRa Alliance. “Only LoRaWAN has strong, established networks with broad coverage areas, while also offering the private network option. For companies looking to launch IoT products and solutions today, the LoRaWAN standard is the only viable solution. Features like firmware updates over the air and the fact that LoRaWAN is an open specification with a robust certification program ensure network and device interoperability. These benefits give confidence to the market that companies are future-proofed and can deploy solutions today with assurance they will work in the future.”

“This is a huge milestone as it proves LoRaWAN Internet of Things, just as the real internet, doesn’t care about country borders,” adds Wienke Giezeman, chief executive and co-founder of community-driven IoT network initiative The Things Network. “With The Things Network and The Things Industries we are happy to be present in more than 89 countries and can provide LoRaWAN connectivity in all corners of the world.”

Highest growth, the LoRa Alliance has detailed, has been seen in the Asia-Pacific and European regions.

Detailed in full during a presentation at the GRCon GNU Radio Conference, John’s project sees teachers work with students to build horn antenna telescopes designed to detect interstellar hydrogen emissions. Constructed from metallised insulation board, a wooden stand, and a metal can for a waveguide, the project is designed to be as accessible and low-cost as possible.

The signals, received by any compatible software defined radio, are processed – naturally enough, given where John’s presentation took place – using GNU Radio, and the performance is impressive: maps of neutral hydrogen in the Milky Way and measurements showing the Doppler shift that proves the rotation of the galaxy have both been produced to highlight the project’s capabilities.

John’s full presentation is available as a PDF to accompany a video recording from GRCon.