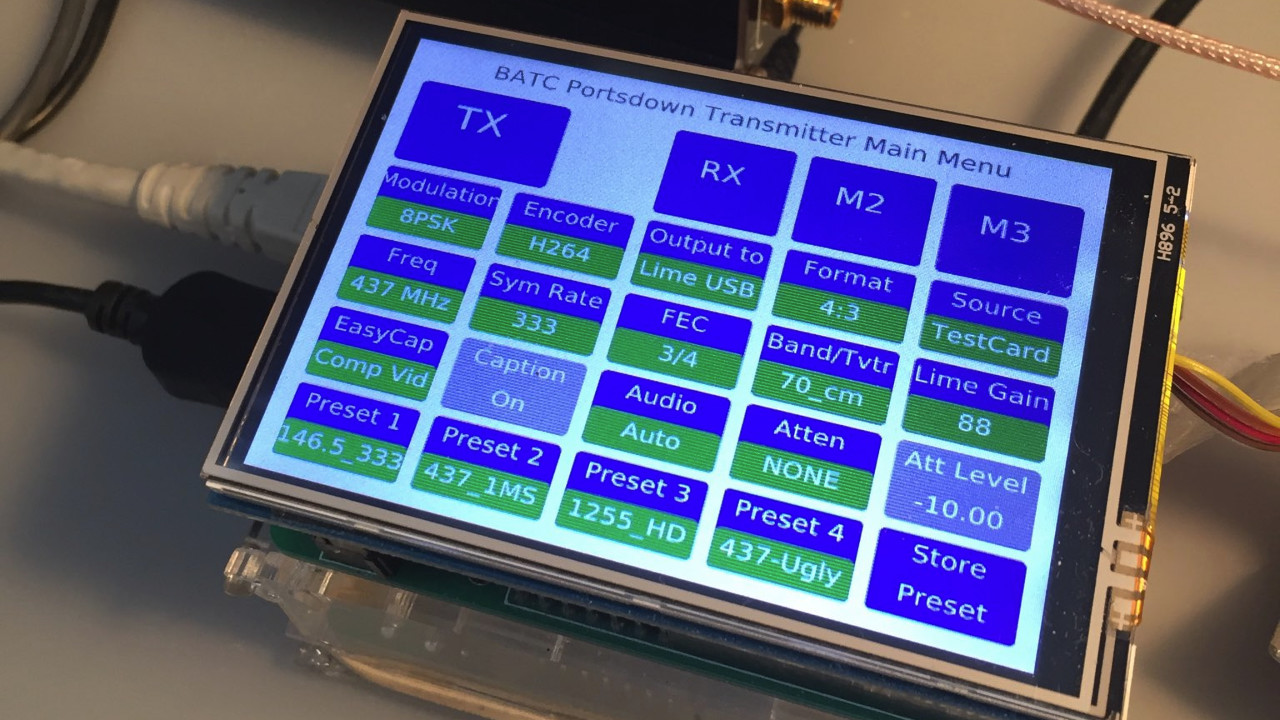 Detailed over on the Lime Micro Community Hub, the Portsdown project offers radio amateurs an easy route into digital TV transmission. In its original incarnation, the Portsdown was based around a Raspberry Pi single-board computer and a LimeSDR Mini software-defined radio – but now the same functionality is available to owners of the larger LimeSDR USB, too.

“Thanks to loaned equipment from ⁦⁦@m1geo⁩, the ⁦@BATCOnline⁩ Portsdown now supports the ⁦Lime Micro⁩ LimeSDR USB,” BATC chair Dave Crump announced via Twitter, “adding to the existing support for the LimeSDR Mini and the LimeNET Micro.”

More information on using Portsdown with the LimeSDR USB can be found on the BATC wiki.

Tech Minds’ Matthew Miller has posted a video walking through his first QSO through the QO-100 amateur radio transponder aboard the Es’Hail-2 satellite – using a LimeSDR Mini.

Matthew’s ground station is built around a LimeSDR Mini software defined radio, connected to a CN0417 filtered pre-amplifier and a low-cost 8W amplifier originally designed for use with 2.4 GHz Wi-Fi radios. The antenna side is a home-brew horn made from 3D printed and cut-metal parts, housed on an off-the-shelf satellite dish. Finally, the software used is the popular SDR Console.

The approach is one shared by many radio amateurs experimenting with satellite communications: the LimeSDR family has proven a popular choice in the field, particularly for use with QO-100.

The video is available now on the Tech Minds YouTube channel.

Salil Tembe has published a build guide for a simple high-frequency (HF) upconverter designed for use with a LimeSDR Mini or other transmit-capable software defined radio.

“In times like these when we are all stuck in our homes, most of us are becoming active on the radio,” Salil writes. “The best ideas come out when we are challenged and right now we are all challenged mentally, thinking what to do during the indefinite lock down. Anyway, today I will demonstrate how to build a simple up-converter with LimeSDR Mini. This same method will work if you have any other transmit capable SDR.”

Salil goes through the basic design of an upconverter and the equations behind applying the concept to some real-world hardware: a Minicircuits ZFL-500HLN amplifier and TUF-3LH mixer. Finally, Salil demonstrates use of the upconverter using the SDR Angel software.

“In this video we run through the main configuration required to set up a CrowdCell with Amarisoft software, in order to create a fully self-contained LTE network, complete with eNodeB plus EPC,” Lime writes of the project. “As can be seen in the video, this basic setup is incredibly straightforward and in no time at all we can have a network up and running and subscribers attached.”

The CrowdCell unit in use is part of a joint project with the Telecom Infra Project (TIP), building on the concept of combining open-specification general-purpose processing (GPP) hardware with the free and open source LimeSDR platform as a means to extend existing networks or create new experimental networks quickly and at a very low cost.

The video is available now on the Lime Micro website, with the promise of future videos diving into additional functionality including Voice-over-LTE (VoLTE), edge-network workloads, and remote operation and maintenance functionality.

Those looking to get started running software defined radio projects on Linux have a new route into the hobby, courtesy of a community spin of Ubuntu Linux pre-loaded with SDR tools and drivers: DragonOS.

Currently in public beta form, DragonOS is a customised Ubuntu Linux operating system, following a shift from an originally-released Debian variant, which comes pre-loaded with the drivers for a range of software defined radio devices – including the full LimeSDR family – alongside applications including GNU Radio, CubicSDR, and QSpectrumAnalyzer.

The project’s maintainer has published a series of videos demonstrating the use of DragonOS for a range of projects – including tracking Long Term Evolution (LTE) cells, decoding weather satellite data, and receiving FM transmissions – on a personal YouTube channel.

DragonOS itself, meanwhile, is available to download from the project’s SourceForge page.

In its latest revision, PiSDR includes support for additional software defined radio hardware, additional pre-loaded software including rpitx, Quisk, CygnusRFI, gpredict, multimon-ng, and leansdr, and a range of bug fixes and enhancements for the existing software including SDR Angel and GNU Radio.

A bigger change is in a dramatic reduction in the image size: PiSDR is now some three times smaller than previous releases, requiring both less data to be downloaded and taking up less room on a microSD card or other storage device. Luigi has also implemented verified compilation through GitHub Actions.

The latest version can be downloaded now from the PiSDR website.

The SWLing Post has published a build guide from Bob Colegrove for a passive resonant transformer-coupled loop (PRTCL) antenna, built from basswood and copper wire.

“There is nothing new about the loop antenna described here,” Bob writes. “It’s just the distillation of the information I was able to collect and apply. There are a number of recurring points throughout the literature, one of which is the equation for ‘effective height’ of a loop antenna. It basically comes down to the ‘NA product,’ where N is the number of turns in the loop and A is the area they bound. In other words, provide the coil with as much inductance as possible.

“The basic concept for this antenna can easily be extended to higher or lower frequencies. Removal of the inner turn of the primary will significantly raise the upper frequency; whereas, adding turns will increase the lower range. Note that the lacing of the primary coil skips one set of holes in the square dowels between the first and second turn. This minimises distributed capacitance between turns. This separation should be maintained if additional turns are added to lower the operational frequency.”

Elsewhere on SWLing Post is a pair of guides to recovering ferrite codes from old VGA cables and turning them into binocular ferrite cores for noise-cancelling passive loop (NCPL) antennas.

“I’ve gotten quite a few emails from Post readers telling me that the only thing holding them back from building a NCPL antenna is the BN-73-302 binocular ferrite core needed for the 1:1 Balun,” explains Thomas Witherspoon. “While so much of the world is sheltering at home due to COVID-19, it’s less convenient to purchase one just for this purpose. But almost everyone has an old VGA or USB cable with ferrite cores they can cannibalise for this very purpose.”

The initial idea and guide came via Twitter: taking the ferrite cores present in old VGA cables and repurposing them as binocular ferrites. This was followed by an upgraded guide with more detail on how to safely extract the ferrite chokes without damage.

The finished guide is available on SWLing Post now. For those looking into NCPL antennas, the website has also published a build guide suitable for use with the scavenged ferrite chokes.

Hackaday has brought to our attention a project from Alberto Gariassi which turns an off-the-shelf field-programmable gate array (FPGA) development board into a software-defined radio – of a sort.

“This project has been created as a way to learn Verilog and have some fun with FPGA and SDR,” Alberto writes. “[The] main goal is to receive AM broadcast stations with as little components as possible. The FPGA chosen, Lattice MachXO2, is also among the simplest components that can be used.

“I was able, with 20 meters of electrical wire as an antenna, to receive stations from thousands of kilometres, located in three continents. Smallest BOM consists of a 30 euros Lattice MachXO2 breakout board, three resistors, one capacitor and a speaker. For better performance it is best to add a crystal oscillator, sensitivity and audio quality are better than with the internal oscillator.”

Alberto’s creation, which is effectively a software-controllable direct downconversion (DDC) receiver, can be found on the project’s Hackaday.io page.

ARRL, the US national association for amateur radio, has reported on initial successes with remotely-administered amateur radio examinations under video supervision.

“Many of our VEs and VE Teams have been working on remotely proctored exam session ideas, employing both video and in-person components — following social distancing protocols,” says ARRL Volunteer Examiner Coordinator (VEC) Manager Maria Somma. “We have been receiving interesting and innovative suggestions, and we appreciate the dedication and ingenuity our examiners have shown.

“Please remember that with the introduction of significant new processes such as these, that there should be proof of concept, establishment of protocols and procedures, and beta testing, before expanding to a larger audience. ARRL is pleased to be one of the leaders in providing an opportunity, although limited initially, for video-supervised exams in this time of social distancing and isolation required by the current health situation.”

Finally, a community member has succeeded in porting the gr-noaa blocks from older GNU Radio releases to GNU Radio 3.8 and higher, addressing a hole in the ecosystem brought about by breaking changes in the latest releases.

“A few years ago when 3.8 became the new maint branch in Gnu Radio, NOAA blocks and others were dropped, planned to be implemented as an OOT [Out Of Tree] module later on,” developer “Altillimity” writes on Reddit. “Since I use quite a few blocks from library such as gr-soapy and gr-satellites I depended on GR 3.8 and resorted with using another Linux install for GR 3.7 and HRPT things.

“But recently I decided to port it to newer versions into a new OOT module, later thinking about porting others blocks for Metop / FY you can find in gr-fec and others (unmaintained as well). So, you can now get all blocks from gr-noaa working in GNU Radio 3.8 and 3.9 without any major changes to 3.7 flowcharts.”

The ported blocks are available on GitHub now.