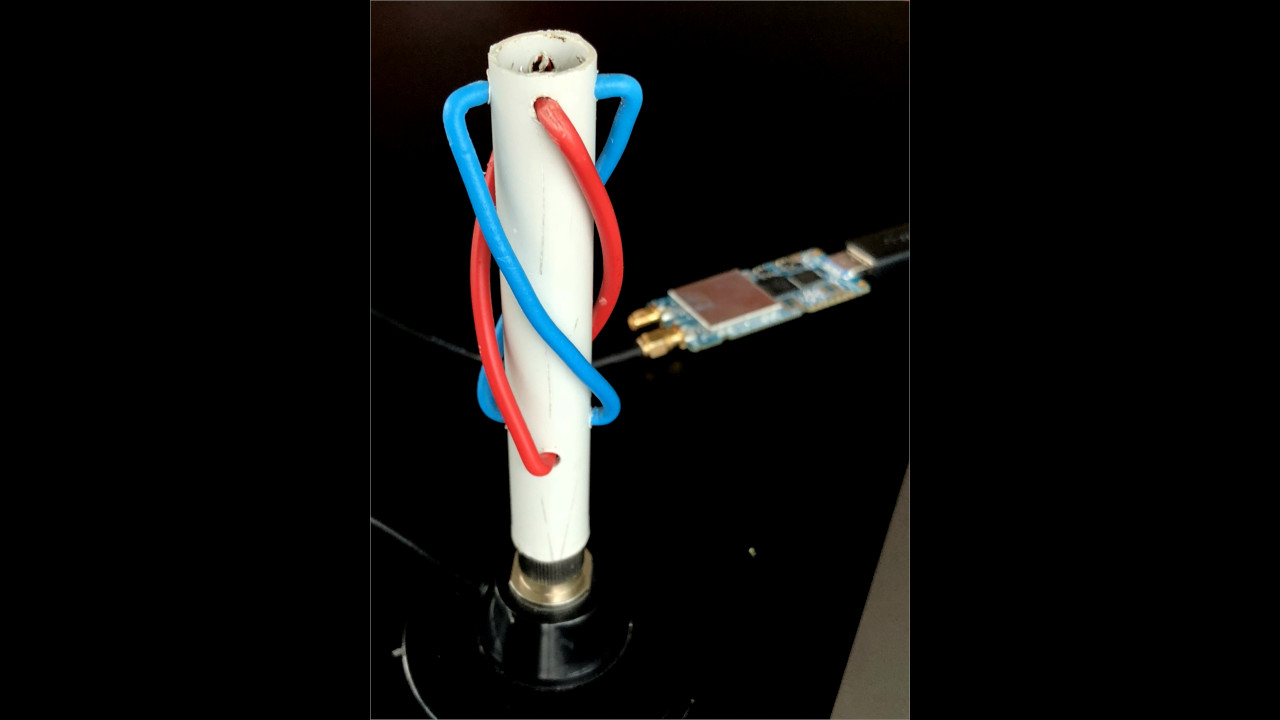 A new Python package, pyLMS7002Soapy, has been published as a more feature-packed replacement for the old pyLMS7002M library – bringing with it bundled examples which use the LimeSDR or LimeSDR Mini as a scalar or vector network analyser (SNA/VNA).

Uploaded to the Myriad RF GitHub repository late last month the new PyLMS7002Soapy package aims to provide easy prototyping and algorithm development for Python users, based on a SoapySDR back-end. Launching with support for the LimeSDR and LimeSDR Mini families of boards, the bundled examples should be of particular interest to end-users.

“There’s been a lot of interest in vector network analyser support for the LimeSDR Mini,” Andrew Back explains,” “and actually what most people want is just a scalar network analyser – it’s simpler to use and gives them, for example, antenna matching info.”

The new Python package is available now from the Myriad RF GitHub repository.

Community member Chuck Swiger has been hard at work building Linux containerised versions of fully-functional LimeSDR-compatible software stacks, allowing users to get up and running as quickly as possible.

“[I’ve had] success getting osmo-trx and OpenBTS running in a Linux container (LXC),” Chuck explains in the forum post tracking his progress. “That adds a lot of functionality for juggling multiple versions in isolation, taking snapshots and experimenting, reverting to known working snapshots, and also being able to export and import stripped down containers for distribution. Osmo-trx, OpenBTS, sipauthserve, smqueue, and asterisk all running in a managable Linux Container.”

Chuck’s OpenBTS LXC container is available to download now from the Myriad RF file repository, while a Docker variant is available from Chuck’s public repository.

Separately, Sharon Dagan has published a Vagrant recipe for building LimeSuite, GNU Radio, and associated software under an Ubuntu Linux virtual machine on a macOS host – providing a quick way for Apple users to get started.

“This recipe makes it easy to use LimeSDR on a Mac computer. It provisions and then runs the LimeSDR and its Linux infrastructure in a virtual machine, and connects to that machine over VNC,” Sharon explains. “The host USB device is exported to the virtual machine, allowing it to directly control the LimeSDR hardware.”

Sharon, who posts in the forums as j4zzcat, has requested testing to iron out any bugs, with users asked to report issues via the GitHub repository from which the recipe can be downloaded.

Electrical engineer and software architect Mark Zachmann has published a piece on his experiments with the LimeSDR Mini, beginning with turning it into an antenna analyser.

“I recently bought a LimeSDR Mini to test antennas and those little transceivers. As usual there are some start-up hurdles so I thought I’d document my voyage to turning it into an antenna analyser,” Mark writes. “There are spectrum analyser applications but at the moment there’s no way to generate the tracking sweep generator and interface it correctly. So, I decided to try more raw programming of the streams.”

Mark’s write-up includes some interesting steps – such as the creation of a 3D printed case for the LimeSDR Mini, using copper foil to reduce noise – along with notes on the process of getting everything up and running for antenna analysis. “Now I need a slow sweep that runs through a much larger bandwidth,” Mark writes in conclusion, “and a way to capture and display the data like a real spectrum analyser.”

Mark’s full post can be read over on Medium.

Twitter user Cyril has posted images of a do-it-yourself quadrifilar helix antenna, demonstrating it picking up Iridium rain on a LimeSDR Mini.

“My first homemade quadrifilar helix antenna is now connected to my Mini LimeSDR,” Cyril writes of his project. “It is working pretty nice considering the configuration, no LNA, and with 3 m of coax. I was able to see some Iridium rain in the waterfall.”

Details of the antenna build have not been published, but in the Twitter thread Cyril has shared an image – reproduced above – demonstrating its construction to be similar to earlier homebrew antenna projects, though significantly more compact.

Compact and unobtrusive antennas are the subject of a thread on the eHam.net forum, too, as part of an ongoing discussion on the matter of using amateur radio in rented apartments where large external antennas may be not be welcomed.

Started by member ND1SU, the thread began with a blow-by-blow account of the installation of an antenna on a balcony with the twist that it cannot be attached to either the railing or the building itself. After some juggling, the installation proved a success – leading Wayne to comment “If you live in an apartment – don’t give up. Don’t ever give up!”

Since Wayne’s original post, other members have chimed in with their own tales – including one member’s discovery, as a newly-licensed radio amateur in 1989, that their own indoor antenna was located around two feet from an upstair’s neighbour’s TV – a TV which appeared to be ‘broken’ due to RF overload from 100W transmissions.

The full thread can be read over on the eHam.net forum now.

Antennas are also the topic of an interesting blog post by Bob Van Valzah, a performance engineer for high-frequency trading firms, on the discovery and analysis of a shortwave radio system for low-latency cross-Atlantic trades.

“I recently stumbled onto the first evidence of shortwave trading at a site in West Chicago, Illinois and then used Federal Communications Commission (FCC) database research techniques pioneered by the owner of this blog to find two more sites,” Bob explains in a guest post on Sniper in Mahwah, a blog dedicated to analysis of radio networks used by high-frequency traders. “My non-disclosure agreements with employers would typically prevent me from talking about this, but my trading-related discoveries are my own while on gardening leave.”

What follows is a step-by-step analysis, triggered by the discovery of shortwave log periodic antennas on what otherwise appeared to a cellular base station site. Through careful analysis, Bob was able to discern both its new owner and its apparent purpose: a means of communication with markets in London and Frankfurt, using shortwave radio for absolute minimal latency – a key feature of high-frequency trading, where milliseconds can mean the difference between a profit and a loss.

Bob’s full write-up is available on Sniper in Mahwah, with more detail to follow.

A telecommunications engineer at the NUP/UPNA Public University of Navarre has announced the design of two new antenna prototypes for satellite use, claimed to offer considerable weight and space savings over their predecessors.

“The space industry is increasingly seeking lighter antennas because these aspects considerably reduce the cost of launching the satellites,” engineer Amagoia Tellechea explains of her inspiration, which led to the use of partially reflective surfaces (PRS) to design an optimal antenna for tracking, telemetry, and control of a satellite.

Amagoia’s prototype is based around a metallic ground plane with a radiating element in the centre and a reflective surface above, creating a resonant cavity with a gain equivalent to a conventional system built from 27 patch antennas. A second design uses metasurface technology for Ku band operation, though has not yet resulted in a functional prototype.

Amagoia’s thesis, written in partnership with Enrica Martini, Francesco Caminita, and S. Maci and which has been published in the Journal of Physics Conference Series, is available to read via ResearchGate.

Discussed in an earlier OTA, Wolfgang’s work has seen Yury’s impressive standalone antenna analyser design, which uses the STFM32F7 microcontroller and a colour screen, improved in a number of ways. Wolfgang’s previous tweaks have included the ability to invert the display colours for better visibility in sunlight, improved accuracy for time domain reflectrometry (TDR), and the ability to measure five frequencies at once.

Now, Wolfgang has also increased the frequency range to cover 100KHz-600MHz with no change in the hardware required to build the project, added a separate tuning window with audible feedback and large progress bar for outdoor use, an outdoor mode for SWR optimisation, a scanning mode for finding a frequency, and a simple visual spectrum analyser.

Wolfgang’s modified source code is available on his BitBucket repository.

The Institute of Electrical and Electronics Engineers (IEEE) has approved a new amendment to the 802.11 standard family, 802.11aj, which allows for high-throughput operation in China on the 45GHz and 60GHz frequency bands.

The standard has been published, but access is available only for paying readers.

Finally, the IEEE Spectrum magazine has published a piece claiming that phased antenna arrays are ready for prime-time use – highlighting their use in upcoming 5G cellular networks.

“Phased-array antennas, in which radio waves can be steered electronically in a desired direction, have become a key technology for 5G networks,” explains author Dexter Johnson in the piece. “The rapid development of this technology over the last five to 10 years appears to be one of the primary reasons why 5G is still on track for commercial roll-out by 2020.

“In the last few years, integrated circuit technology with silicon semiconductors has fulfilled both the beam steering function as well as the traditional transmit/receive functions. This has effectively driven down the costs associated with these devices to the point where they can be mass produced and deployed for 5G.”

Dexter’s full piece can be read on the IEEE Spectrum website.