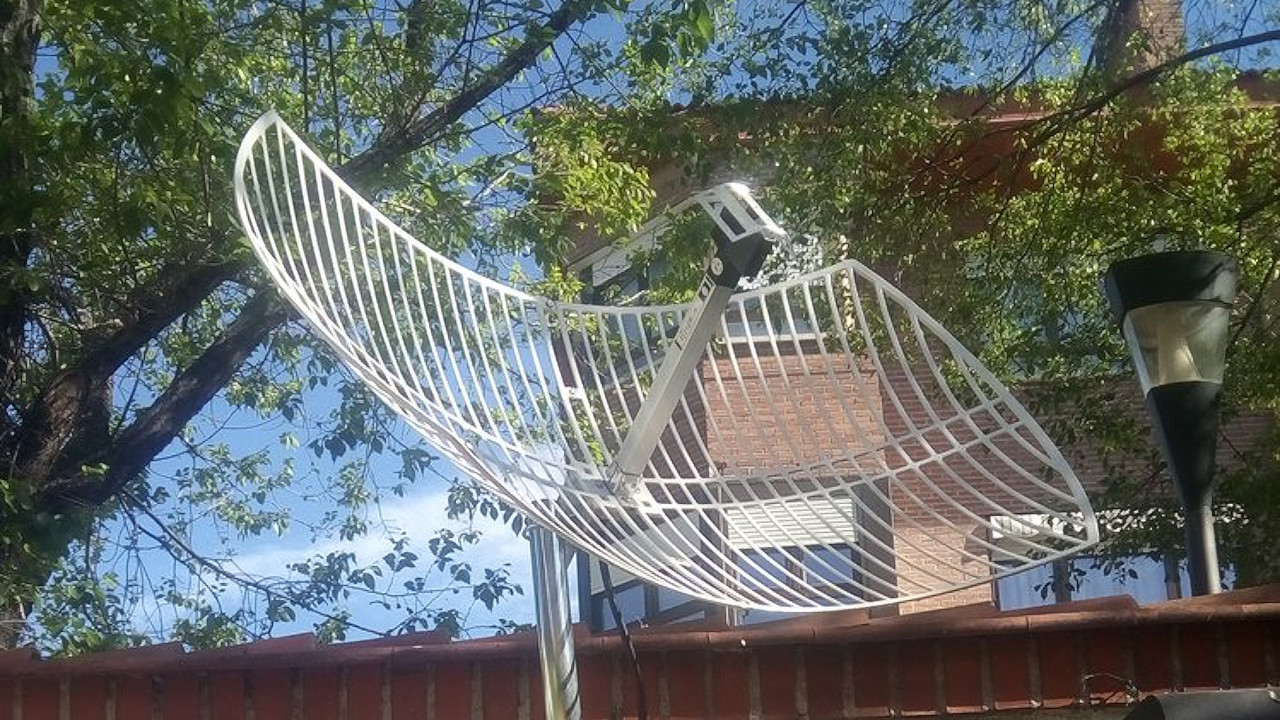 The first of the LimeSDR Field Reports has been published, courtesy of community member Daniel Estévez: a look at his LimeSDR Mini-powered satellite ground station project.

“My project uses a LimeSDR Mini as the basis for a ground-station for the amateur radio transponders on the geostationary satellite ‘Es’hail 2’ (known as ‘QO-100’ by the amateur radio community),” Daniel writes. “The uplink to the satellite is on the 2.4 GHz band. Many people are using an upconverter to translate a signal from around 430 MHz to 2.4 GHz. However, using a LimeSDR it’s possible to generate the 2.4 GHz signal directly.

“My design is enclosed in a weathertight box, so it can be mounted outdoors next to the transmit antenna. This is important, as it limits losses in the coaxial cable feeding the antenna. Losses at 2.4 GHz can be quite high, so it is desirable to keep coaxial cable runs as short as possible. To control the LimeSDR Mini, a BeagleBone Black Arm single-board computer is included in the weathertight box. The BeagleBone Black is connected to my LAN by Ethernet, allowing control of the LimeSDR Mini as well as the other equipment (for instance, enabling or disabling the RF power amplifiers).”

Daniel’s full write-up is available on the LimeSDR Mini Crowd Supply page, while more information on the Field Report Contest can be found here.

“One of the problems I faced during growing up was that in the location where I grew up and had my basic education, radio reception was poor,” Godfrey explains of his inspiration. “Even when I could receive radio signals, the signals was bad and so I would look for a place where I could listen to the radio with clarity since I liked and still like to listen to music a lot; and as you know, a good music experience require a clear strong signal.

“Another problem existed: monopoly of radio stations. If a radio station is located at a particular area, it only broadcasts things which are centred around that area. And so the people in those remote area will still face the bottle effect even though the bottle will be a bit bigger. You can argue there are some radio station which try to cover the whole country, but those too have a problem of monopoly in what they transmit.

“Digital radio can solve these challenges,” Godfrey explains, “since it has better quality of sound and can carry multiple radio stations per a single ensemble channel. But there is another problem: since digital radio is a new technology, and in my country trials haven’t even started yet, so the prices of transmitters are still expensive – let alone the receivers.”

The solution, as the full interview explains: a LimeSDR-powered radio station, created using the ODR-mmbTools software, which could one day bring DAB broadcasting to the far reaches of Godfrey’s native Tanzania.

RTL-SDR has highlighted a write-up by Steve Bossert which details the steps required to run the LimeSDR Mini in SDR# on Windows.

“Of all the SDR programs, SDR# still holds a special place in my heart,” Steve writes on the Hudson Valley Digital Network blog. “Until recently, it was hard to get the LimeSDR Mini working with this versatile piece of software. Lucky for us, Goran Radivojevic (YT7PWR) has done some recent great work to make these two software defined radio things play nice together.”

Steve’s piece walks through downloading Goran’s additional DLL files for SDR#, adding a new front-end plugin definition to the SDR# configuration file so the LimeSDR Mini can be selected, and demonstrates the unit working in SDR# Release 1700 as soon as selected under the Sources drop-down.

The full guide is available on the Hudson Valley Digital Network blog.

Twitter user ‘Old Hack’ has shared a LimeSDR Mini case with a difference: it’s printed using conductive PLA filament, in an experiment designed to offer the unit some shielding.

“The resistance is really too high to be a decent shield but at least the case won’t build up a static charge, it will tend to stay at the same potential as the gnd parts in the device. Potential difference being the critical thing in ESD.”

‘Old Hack’ has shared an image of the unassembled case and the finished assembly on Twitter.

The first LimeNET Micro units have begun arriving with open-source developers throughout the world, ready for new software and utilities taking advantage of its combined software-defined radio and general-purpose processing capabilities.

Launched late last year on Crowd Supply, the LimeNET Micro combines open-source LimeSDR hardware with a Raspberry Pi Compute Module 3 to create a single-box radio unit for everyone from hobbyists and hackers to academics and engineers. Shipping to backers began in early mid-April, and a number of units have been provided to open-source developers and community members to help boost the ecosystem.

“LimeNET Micro arrived today in the mail from @LimeMicro,” Daniel Estévez writes on Twitter. “Thanks @9600 and the rest of the team for supporting open source developers! I was playing with it yesterday for some time. My first impression is that the Raspberry Pi CM is quite powerful. I was able to stream 10Msps with SoapyRemote, much more than on the Beaglebone Black.”

“I got mine too,” adds John Worsnop. “I love the nice touch of the callsign and name! Thanks @9600 @LimeMicro. Now to do something with it! I’m reminded of the Arthur C Clarke quote, ‘He was master of the world. He wasn’t sure what to do about it but he would think of something.'”

More information on the LimeSDR Micro is available on the Crowd Supply campaign page.

For those taking their first steps in software defined radio, a new video from SignalsEverywhere may prove useful: a guide to identifying and receiving common modulation types.

Created using the SDR# software, though with advice applicable to any SDR software with a waterfall, the SignalsEverywhere video walks through identifying and tuning in to four common modulation types: amplitude modulation (AM), frequency modulation (FM), single-sideband modulation (SSB), and continuous wave (CW) modulation.

The ten-minute video is live now on the SignalsEverywhere YouTube channel.

The GSM Association (GSMA) has hit back at claims frequencies chosen for 5G roll-outs in the US and elsewhere will reduce data available for weather forecasting in a way that could delay vital flood warnings.

“5G and weather forecasts can and will co-exist – it’s ludicrous to suggest otherwise,” said Brett Tarnutzer, head of spectrum at the GSMA, in response to media coverage claiming that US and international 5G roll-outs will reduce the accuracy of weather radar. “To suggest that our 7-day forecast will go away with 5G is simply fake news. We cannot allow these scare tactics to prevent us from reaping the huge societal and economic benefits of 5G networks. We urge everyone to simply look at the facts and not get drawn in by misleading rhetoric.”

Affording to the GSMA, 5G and weather radar can co-exist through the use of “reasonable interference mitigation approaches,” claiming that the worries of the weather forecasting community are based on “a decade-old scrapped programme of weather sensors that were never deployed [and] fail to take into account how 5G actually works and tried and tested approaches for managing interference issues without adopting overly restrictive protections.”

The GSMA has not, however, detailed these tried-and-tested approaches publicly.

Showcased in a talk at the CircleCityCon 2019, Josh’s creation – described as “SigInt for the masses” – is an open-source Raspberry Pi-based handheld SDR system. “The following software will be used: Linux (Raspbian), RPITX, RTLSDR libraries, GNU Radio (gr-inspector), GQRX, and other accompanying tools,” Josh writes in the talk’s synopsis. “We will use FCC IDs, manual scanning of spectrum, and gr-inspector to find and target potentially vulnerable frequencies and protocols as well as show how exploits could commence. We will attempt a live demo of such an attack using a system the presenter brings in.”

The designs for the system itself, described as a “sample platform,” are available on GitLab under the GNU Public Licence 3.0; the full talk, meanwhile, is available on YouTube.

Fractal Antenna Systems has announced the development of a “metamaterial antenna” dubbed the Metablade, which is designed to supplant traditional Yagi antennas for a range of workloads.

“For more than two decades, Fractal has explored, developed, and invented fractal-based electromagnetic technology, using size-shrunk fractal resonators/fractal antennas with a broad and/or multi-band advantage. Fractals have self-similar structure on a variety of size scales. Close-packing of the fractals makes this a metamaterial, producing a unique composite: a ‘fractal metamaterial,’ that enables wave bending, gain, and control in ways previously not attained,” the company claims of its designs.

“Fractal inventors found that fractal metamaterials, with their ability for wideband evanescence and surface waves, could produce parasitic antennas that were highly directional and far smaller in form factor than Yagis,” the company continues. “From VHF to frequencies encompassing Wi-Fi and even 5G, the new Metablade antennas can be drop replacements for their Yagi counterparts, while their smaller size lets them be used in situations where Yagis cannot.”

More information on the company’s claims can be found on its official website.

Finally, Hackaday has written of a project to create a variable step attenuator by connecting two smaller units in series under the control of an Arduino Nano.

The creation of DuWayne Schmidlkofer, the custom 63 dB step attenuator uses two low-cost 31.5 dB 0.5-step attenuators, connected in series to achieve the 63 dB goal. “I will use an Arduino Nano with a small OLED display for control of the attenuator,” DuWayne explains. “A rotary encoder will be used to select the attenuation level, and the push button switch will be used to select ether 1 or 10 dB steps. Everything should fit in a small 3D printed cabinet along with a 9 volt battery for power.

The project soon grew: “I recently found some 9V batteries that have a built in charge controller,” DuWayne writes, “and can be recharged through a micro-USB connector mounted on the bottom of the battery. This has made it possible to just include an access hole on the case to allow connecting of the USB cable for recharging. When I was happy with the final design of the printed case, I added some laser print decals. I also painted the inside of the case and bottom cover with several coats of an acrylic paint that contains some actual powered copper.”

The full write-up is available on DuWayne’s blog, along with a download for the design files and Arduino sketch required to build your own.