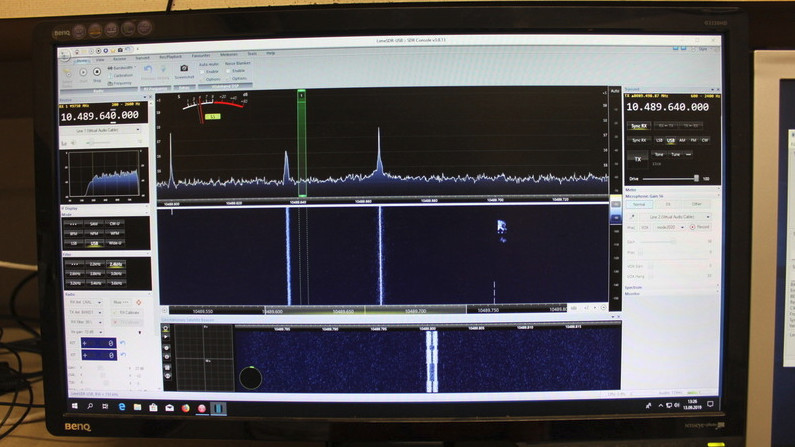 “The bandwidth regulation on the [QO-100] narrow band transponder, being 2,700 Hz, prevents the use of other digital voice modes like D-Star or DMR, normally used on VHF/UHF,” Gerhard explains. “FreeDV is a narrowband mode, developed for the special conditions on shortwave, and therefore is fulfilling this requirement. From the beginning I saw this advantage over other digital voice modes and was trying to promote FreeDV over satellite. Mode 2020 is most interesting as it is providing better audio quality than most SSB signals, which is always a standard to compare with.”

““FreeDV is a digital voice mode for HF radio,” explains Rowe. “It’s an open source digital voice system, written and designed by hams. In particular, the speech codecs employed are open source. FreeDV 2020 is possibly the first use of a neural net speech codec over the air. The codec is based on the LPCNet speech synthesis engine developed by Jean-Marc Valin. The codec supports high quality speech at lower bit rates than previously possible.”

The interview discusses the modifications required to transmit FreeDV 2020 – as opposed to FreeDV 1600, which worked without modification – using a ground station based on a LimeSDR USB and the SDR-Console V3 software, and can be read in full over on the Lime Micro Community Hub now.

The University of Patras is working on an end-to-end open-source facility for 5G Core and New Radio (NR) trials, as part of the 5G Verticals Innovation Infrastructure (5G-VINNO) programme, powered by LimeNET and LimeSDR hardware.

“The 5G-VINNI facility in Patras/Greece is an exemplary open source 5G-IoT facility,” Christos Tranoris and Spyros Denazis write in a piece for ERCIM News first published back in April. “This means that most of the installed components are offered as open source but there are also dedicated components and services to support 5G-IoT scenarios. Various solutions are deployed in the Patras/Greece facility,thus creating a unique 5G playground for KPI validation and support for future verticals.”

The facility is based on the use of LimeSDR and LimeSDR Mini software-defined radios, the LimeNET Mini as indoor base stations for in both CrowdCell and user equipment (UE) models, and the larger LimeNET Base Station for outdoor tests.

“The Patras facility has already met the challenge of delivering a 5G facility based mostly on open source components,” the pair write. “Due to lack of 5G NR UEs SDRs cards attached on laptops have been used to initiate testing of 5G KPIs. The facility implements network slicing and slice templates utilising open source components thus the facility delivers isolated logical networks, running on common infrastructure, mutually isolated and created on demand. The performed tests so far involve both Virtual and Physical Network Functions (VNFs/PNFs), various PoCs have been performed or scheduled in near term (like concurrent execution of different slice types eMBB and URLLC) while the facility prototypes the automated orchestration and delivery of an end-to-end isolated 5G network for every tenant, allowing multiple experiments to be deployed, depending however on the available resources.”

More information is available in the ERCIM News article.

RTL-SDR has drawn our attention to a project by Martin Bernardi, Augusto Remedi, and Ignacio Rittano: An offline decoder for VHF omnidirectional range (VOR) navigation signals written in Python.

“[This tool] determines the bearing to your position from a VOR antenna,” Martin explains in the project’s notes. “After a little tuning we were able to determine our bearing with less than 3° of error. This was made in a hurry as a final project, so do not expect a reliable real-time decoder. On the other hand, We think the code is really simple if you are a numpy/scipy/Python guy.

“As far we are concerned, you can assume that the transmitter sends two 30 Hz tones, we name them REF (reference) and VAR (variable) signals. The REF tone is modulated in AM, together with the Morse code. On the other hand, the VAR signal is present on a FM subcarrier. So you need to first demodulate the AM carrier (obtaining REF and Morse) and then isolate the FM subcarrier to make a second demodulation. The end result is the 30Hz VAR tone. By comparing the phase difference between the REF and VAR tones you can directly determine your bearing.”

The tool is available on Martin’s GitHub repository under the MIT Licence.

The O-RAN Alliance, a group dedicated to the opening of radio access network (RAN) technologies, has announced its first software release, codenamed Amber and constituting over a million lines of code.

“The first release of the O-RAN Software Community exemplifies the progress we’ve made as an industry, and AT&T is proud to be a member and active contributor of this effort,” claims Andre Fuetsch, chair of the O-RAN Alliance. “Together, we’re driving forward open networking, software and virtualisation in global wireless networks, which is critical as we shift to a 5G world.”

“We are really pleased to deliver the first release of the O-RAN Software Community with key elements in both repositories in such a short period of time,” adds Chih-Lin I, co-chair of O-RAN Technical Steering Committee (TSC). “The Amber Release provides a good framework for the non-realtime RIC and the near-realtime RIC under Apache 2.0, as well as the O-CU and the O-DU under the FRAND-based O-RAN Software License. It demonstrates the value of close alignment between the specification work and the corresponding open source software development.”

More information on the release is available on the O-RAN Software Community website.

“When building communal mobile telephony networks, traditional core network infrastructure poses a fundamental challenge: it is built on a centralised paradigm and requires highly available network links at all times,” explains Neels Hofmeyr of the problem being tackled.”Osmocom is currently implementing Distributed GSM (D-GSM), a concept that is a far better match for a decentralised cooperation of independent communal mobile networks, who don’t have the luxury of ultra-reliable networking infrastructure.

“We are implementing D-GSM as part of the Osmocom CNI stack. D-GSM is a close cooperation with/for Rhizomatica, an organisation of community owned operators providing mobile telephony service in numerous rural communities in Oaxaca, Mexico. We are aiming to overcome common practical problems that their current mobile networks are experiencing, improving availability and stability.

“The results of this work are naturally contributed to the Osmocom project and are freely available for anyone to use, under terms of the GNU AGPL,” Neels confirms. “The implementation of D-GSM is mostly funded by the Mozilla MOSS grant, and carried out by sysmocom-employed Osmocom contributors. Thank you for making this possible!”

More information is available on the Osmocom blog.

Radio amateur and security researcher Clayton Smith has written of his effort to create a Capture The Flag (CTF) challenge based around software defined radio, for the BSides Ottowa event.

“For this year’s BSides Ottawa CTF, I built a number of software-defined radio challenges,” Clayton explains. “One of my favourites was ‘Hopping Along,’ a four-part frequency hopping challenge. When players tuned to 922.125 MHz, they were greeted with a narrow-band FM signal: ‘This is VE3IRR. The first flag is tango…’ And then the signal hopped down to 922.025 MHz.

“Tuning there would reveal some more letters of the flag: ‘…victor echo uniform golf whiskey tango papa papa…’ Next the signal hopped up to 922.450 MHz, providing the end of the flag: ‘…kilo sierra hotel delta victor tango charlie.’ Of course, you’d invariably miss some of the letters while tuning from one frequency to the next. But since the signal repeated about once per minute, you could camp out on any one of the three frequencies and wait for the piece you were missing to be transmitted again. Players were awarded with 50 points for putting together the three pieces.

“Then the problem got harder,” Clayton continues. “Part two (worth 100 points) was similar, except that the signal hopped once per second. This challenge could be completed in a similar fashion, as long as you had a lot of patience. Part three (worth 150 points) had 5 hops per second, and part four (worth 200 points) had 50 hops per second! Clearly these were too hard to be solved by hand, and so a better approach was needed.”

Clayton’s write-up on the creation and solution of the puzzle is available on Irrational.net, along with GNU Radio flow-graphs demonstrating possible solutions.

“I will show you how to use GNU Radio (and the GUI tool Companion) with a SDR to capture a portion of spectrum containing public FM broadcasting and decode it to audio,” writes Jan Hrach. “Recently, someone has suggested on Hacker News to do a basic walk-through capturing some data from radio to a file and demodulating it. So here is my take.

“I will show this for GNU Radio 3.7.13 (the version now available in most distros); there was a version 3.8 released recently, but I did not have a chance to experiment with it yet. In Debian, install the gqrx-sdr package, it will pull everything else as dependencies. You will also need some radio hardware,” Jan continues. “If you don’t have one, I will provide sample capture file at the end of the post, so you can play with it offline.”

The full guide is available on ABC Linuxu now.

Finally, RTL-SDR has highlighted an interesting project for anyone working on ADS-B reception: a visualisation toolkit which runs entirely in a text-based console, with no desktop required.

Written by John Wiseman in ClojureScript and targeting Node.js, the coole-radar package relies on a Virtual Radar Server package, which can interface with software defined radios to pick up real-world ADS-B Mode-S transmissions; alternatively, it can be linked in to Microsoft’s Flight Simulator X to display simulated aircraft.

In either case, the tool offers a functional radar screen, a list of detected aircraft, and in its latest revision a photo of the selected aircraft type – the latter feature being somewhat limited by coole-radar’s use of a text-mode terminal, offering a somewhat blocky but roughly recognisable representation of aircraft type.

The software can be downloaded from John’s GitHub repository now.