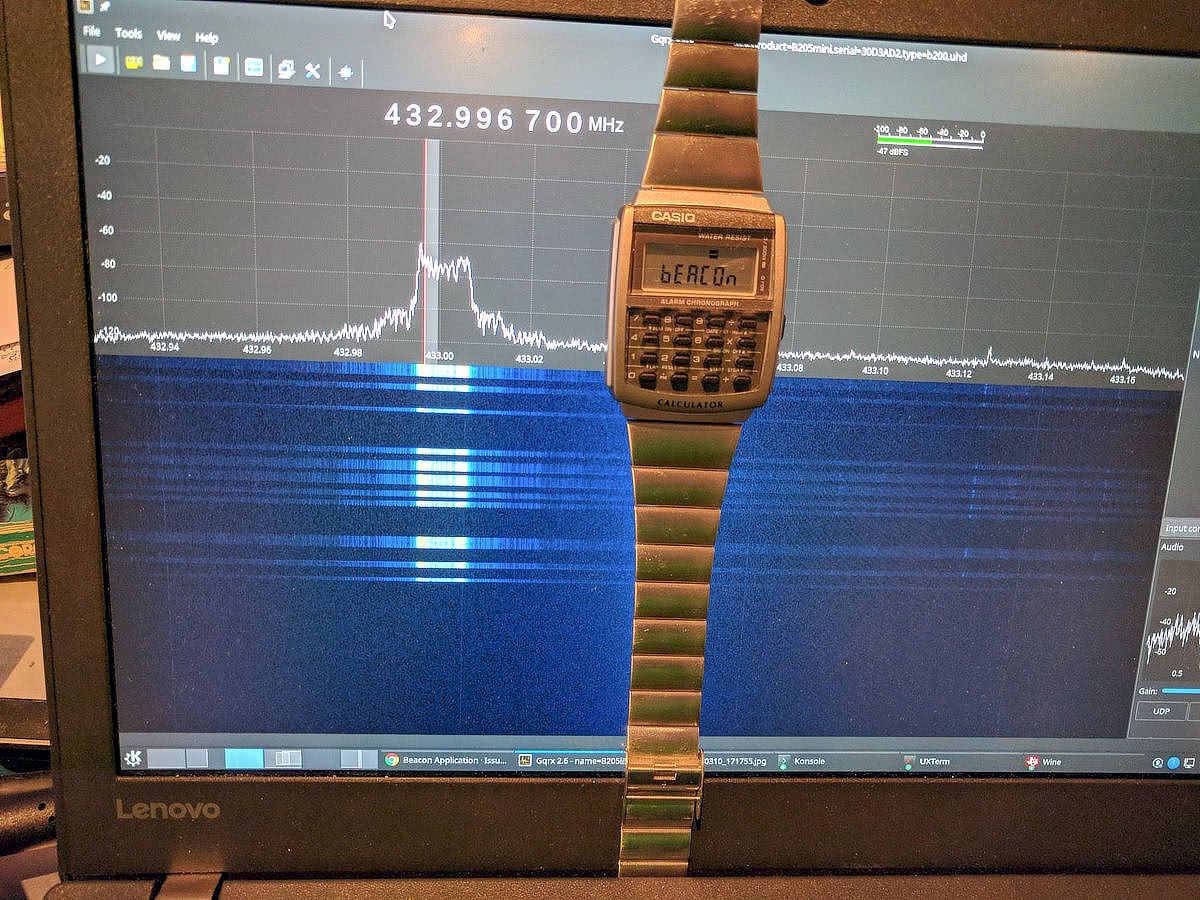 BT and Lime Microsystems have launched a competition for all LimeSDR, LimeSDR Mini, and LimeNET users: build a radio access project and pick yourselves up a LimeSDR with official aluminium case plus the potential to publish your creation in the LimeNET app store.

Designed to encourage the development of software-defined radio access applications – cellular network base stations, Wi-Fi access points, Bluetooth, LoRa, TETRA, or platforms as-yet unexplored – the competition calls for the use of LimeSDR-based hardware, open-source technologies, and the application of ingenuity: projects that have already been demonstrated as part of the LimeSDR family Crowd Supply campaigns will need additional work to be in with a chance, while more novel projects will stand in a better position.

Entries received by the 31st of January 2018 via the Myriad-RF RAN Forum will be in with a chance of winning, with the best ten being selected for announcement by the 14th of February. Applications submitted don’t have to be entirely complete by the judging date, but simply presented with enough detail to allow for judging.

The ScratchRadio extensions, which add LimeSDR-compatible software defined radio capabilities to the popular Scratch visual programming environment, has been going from strength to strength with new features and active demonstrations showing how the low-cost LimeSDR Mini can be used with the even-lower-cost Raspberry Pi 3 single-board computer to create a fully-functional SDR platform for early-years education and beyond.

First demonstrated back in October, ScratchRadio allows the Scratch visual programming language to control a LimeSDR for sending and receiving radio signals. While it lacks the power of a full-fat GNURadio installation, it offers considerably reduced complexity in a setting familiar to students and teachers already using Scratch in computing education. The latest demonstration, created as part of the LimeSDR Mini campaign, shows two Raspberry Pi 3 SBCs with LimeSDR Minis sending and receiving messages via on-off keying (OOK) on the licence-free 433 MHz spectrum.

With a per-unit cost of under $200 including both the Raspberry Pi 3 and the LimeSDR Mini, it’s hoped that ScratchRadio will help introduce software defined radio concepts to an entirely new generation at a very low cost to schools and parents.

In other educational news Karl Woodward’s LimeSDR Made Simple series continues with a look at using a LimeSDR as a Vector Network Analyser (VNA) using the pyLMS7002M Python library.

The ninth episode in the series, which aims to take the reader from core concepts all the way through to practical applications, Karl’s latest LimeSDR Made Simple demonstrates the use of the the pyLMS7002M VNA sample to measure scattering parameters, or S-parameters. These measurements are then mapped onto a Smith chart, providing a three-dimensional plot for a quick look at the response of a circuit at a given frequency.

“Note that this is not going to be a calibrated, highly accurate VNA — like equipment from Rohde & Schwarz and costing more than a luxury car,” Karl jokingly warns, “but it does work to give an indication of how a circuit will look at a given frequency.”

Designed, eventually, to replace the current 4G Long Term Evolution (LTE) standard, which in turn was an upgrade for the 3G standard for which the 3GPP was originally formed, 5G NR brings with it the promise of major enhancements including new Quality of Service (QoS) functionality, network slicing across the entire public land mobile network (PLMN), and seamless mobility between a 5G or other 3GPP access network and a non-3GPP network like Wi-Fi.

Studies concentrating on 5G NR Stage 2 will being in the first quarter of 2018, the 3GPP has confirmed.

The EDN Network has published a piece on beamforming as a means to expand the capacities of both 5G and older 4G networks, promising a boost through the use of software-driven beamforming antennas.

As explained by Pivotal Commware’s Eric Black, beamforming allows multiple concurrent transmissions to share the same frequency without interference, boosting the capacity of a given radio network. The piece covers both the common single-user multiple-input multiple-output (SU-MIMO) and the newer multi-user MIMO (MU-MIMO), suggesting that holographic beamforming (HBF) via passive electronically-steered antennas (PESAs) offers considerable advantages over both – though, it must be noted, Eric’s company produces exactly that type of antenna.

RTL-SDR has alerted us to a new release of the popular LimeSDR-compatible SDR# with improved noise reduction capabilities, adding an improved smoothing algorithm to the IF and Audio plugins.

“We briefly tested the new algorithm and compared it against an older version,” RTL-SDR explains in a blog post which includes audio samples for direct comparison of the unprocessed audio against both the old and new algorithms. “The new algorithm has noticeably less hiss and is slightly clearer when compared at the same noise reduction level. We tested with the same threshold levels and using the speech profile.”

The SWLing Post has published a post on affordable off-the-shelf antennas for shortwave listening, following a suggestion from a contributor who claims to lack “the skill or the patience” for the DIY approach.

“Many listeners simply don’t have the free time or enthusiasm to explore home brew antenna options,” the post begins, “especially if they’re seeking one optimised antenna for their location and listening habits. I have built almost all of the antennas I use so I’m not an expert in this area, therefore I asked Fred Osterman at Universal Radio for a couple of suggestions.”

Those suggestions: the Alpha-Delta DX-SWL Sloper and the lower-cost Par EF-SWL – though comments are being welcomed from anyone who has experience of quality yet affordable alternatives.

The power of radio is brilliantly demonstrated in a new feature on the IEEE Spectrum entitled Building Alaska’s Internet, detailing the completion of the TERRA hybrid fibre-microwave network providing internet connectivity to Alaskans.

“TERRA relies primarily on 109 microwave towers, a classic technology that can still be deployed faster and more cheaply than fibre-optic cables in most of rural Alaska,” Amy Nordrum and Celia Gorman’s piece explains. “But the project nevertheless took GCI [General Communications Inc.] a very long time and a lot of money to complete. It shows what a challenge it can be to build and maintain a communications network in one of the most remote areas in the world—even when you are using the most tried-and-true technology available.

“Because there is no road system throughout much of Alaska, each of those microwave towers had to be flown or barged in. Some were installed in villages, and 23 were hoisted to mountaintop sites by a small fleet of helicopters. These towers, all 109 of them, poke up every 15 to 65 km in the Alaskan bush.”

Based around the TensorFlow deep-learning platform and designed to be accelerated through Nvidia’s GPU-powered CUDA platform – though also able to run on a CPU, albeit more slowly – CNN-rtlsdr uses a training model to ‘learn’ how to detect and classify signals being received via SDR. The current pre-trained model is capable of detecting four classes of signal: WFM, TV SECAM carrier, DMR signal, and ‘others’ for anything which doesn’t fit in the other three categories.

The project is based on image classification technology, meaning that it is – in theory at least – compatible with almost any format of signal recording from live inputs through to IQ samples, audio recordings, or waterfall graphics – so long as the signals being classified are in the same format as the original training data.

Norway officially switched off its national FM radio services this month, but CBC.ca has an interview with a holdout who is refusing to cease broadcasting: Radio Metro’s Svein Larsen.

“I don’t think that the government has actually the right to give that sort of order,” Svein explains of his decision to keep broadcasting against the government’s express instructions. “But now the public starts to be aware that they actually are closing down not only the national network on FM, but also some of the local stations. But not all of them. Very many are going to continue to broadcast until 2022 — and even after that. But it’s my stations in Oslo that they’re looking to close down.”

Norwegian authorities have stated the move from FM to DAB for national and local broadcasts will allow for a greater range of stations than the old FM network.

Finally, Hackaday has found a fascinating project described as “a watch only a ham can use”: Travis Goodspeed’s GoodWatch.

Based on an MSP430 microcontroller housed in the body of a Casio CA-53W calculator watch, Travis’s GoodWatch offers considerable improvements over the original device’s functions: a reverse Polish notation (RPN) calculator, hex editor, MSP430 disassembler, and in its second iteration a built-in radio which uses the stainless steel watch strap as a wire antenna for radio reception and transmission – “everything from CW [continuous wave] to 4FSK [four-symbol frequency shift keying],” Travis writes.

Full details of the GoodWatch, including hardware files and software source, are available on Travis’ GitHub repository under an unspecified licence.