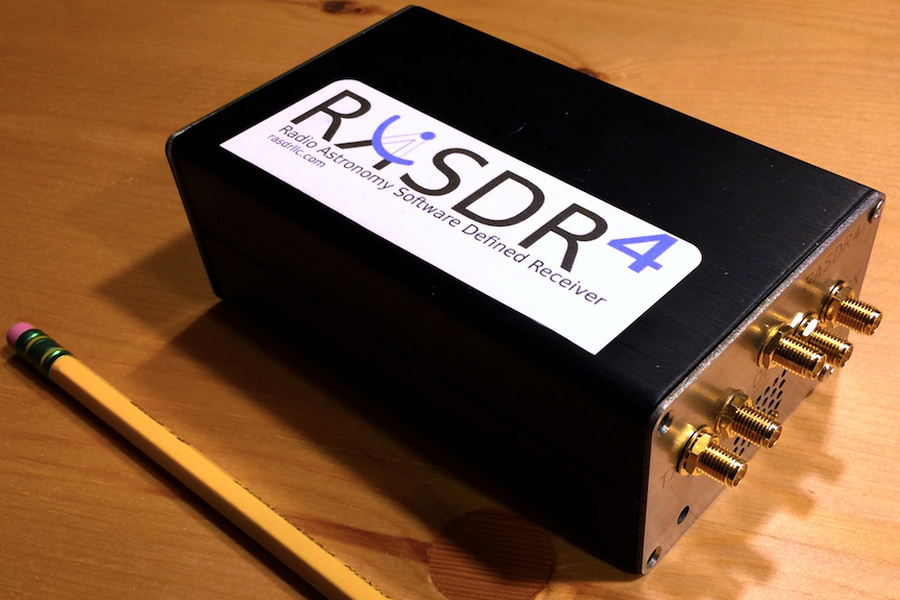 The Society of Amateur Radio Astronomers (SARA) has announced a new revision of the Radio Astronomy Software Defined Radio (RASDR) platform, and is offering the resulting shielded LimeSDR enclosure kit to all LimeSDR owners at cost.

Building on the success of previous RASDR implementations, RASDR4 was announced on the Myriad-RF forum and features a ready-to-assemble shielded enclosure for a LimeSDR board, six SMA connectors, passive cooling when used for single-channel receive operations and room for an active cooling fan for multi-channel and simultaneous transmission use, and a DB-15 port for expansion via a future general-purpose input-output (GPIO) kit.

Designed specifically for radio astronomy but also suitable for general-purpose radio use, the RASDR4 kit is available now priced at $75 with US delivery included; SARA members receive priority allocations from production runs.

Those attending this year’s FOSDEM event may want to head to Brussels a little early in order to attend a DARPA-sponsored software defined radio hackfest event organised by Thomas Rondeau, former leader of the GNU Radio project, on the 1st to the 3rd of February.

The hackfest aims to look at ways to address the incidental emitter interference problem, an issue in which devices not related to radiofrequency tasks nevertheless generate and emit RF energy which then interferes with legitimate signals. The key feature of the event: the capture, identification, and analysis of as many interference sources as possible.

Full details, including a downloadable problem book, can be found on the official event page.

Also responsible for bringing MATLAB and Foobar2000 support to the LimeSDR, Jiang has now completed the work to bring continuous integration to LimeSuite. Using Jiang’s contribution, which has now been merged into the Master source tree, commits are now built automatically as a means of flagging potential problems sooner rather than later.

LimeSuite also has two shiny new builds waiting in the wings, bringing some minor bug fixes to the Stable tree and adding new resource location functionality to the Master tree.

LimeSuite 16.12.1, the next Stable build to be released, is set to include fixes for compiling the software on Apple macOS and another fix for an overload bug when calibrating the LMS7002M microcontroller. LimeSuite 17.01.1, meanwhile, is set to be the first release to bring new APIs for resource location and image updating, along with the ability to detect the presence of a reference clock when a LimeSDR is connected, chip version dependant CMIX settings for calibration and tuning, dynamic LML clock phase configuration depending on the interface frequency, and support for filtering ConnectionSTREAM by serial.

Windows kernel-level drivers for Myriad-RF devices are now to be formally signed with an official certificate, ensuring their security and putting an end to warning messages and workarounds for same.

Following the receipt of a official signing certificate this week, the process of signing all Windows drivers has begun and should be completed over the coming days. Once fully signed, Windows will implicitly trust the drivers – making installation significantly easier and reassuring users that the code is trustworthy and has not been corrupted or tampered with since it was built and signed by the project.

For those waiting patiently for a LimeSDR board, the announcement that shipping from Crowd Supply has begun will be welcome news – and by the time you read this the first batch will already be underway.

Shipping slightly ahead of the original end-of-January schedule, anyone waiting on a board will receive a notification from Crowd Supply once their unit – or, in the case of higher-tier order levels, units – has shipped. For many countries, this will include fully-trackable postage information; in other countries, the tracking will operate through to the US border. In all cases, international orders will be subject to customs clearance which may add some time on to the delivery schedule.

Paul Clark has publicly announced WaveConverter, a Python tool for the analysis and reverse engineering of captured radiofrequency signals, via a presentation at the Schmoocon event.

Brought to our attention by our friends at RTL-SDR, WaveConverter is designed to process a stored I-Q file and extract data matching user-supplied modulation parameters, framing, and encoding. Filters are included to support processing glitched or corrupted signals, and signal protocols can be stored for future use once determined. The tool is available under the MIT Licence.

Community members in the US may wish to speak to their Congressional representative about the Amateur Radio Parity Act, a bill introduced this month calling for the prohibition of deed restrictions which would prevent radio amateurs from operating.

According to an analysis of the Bill by ARRL, Bill HR 555 is identical to HR 1301, introduced and passed by the House of Representatives in 2015 but cancelled following a lack of support in the Senate. In both cases, the Bills are designed to require the Federal Communications Commission (FCC) to prohibit the application of deed restrictions created by homeowners associations designed to prevent amateur radio operations from pursuing their hobbies.

Finally, Norway has kicked 2017 off by beginning the phased closure of the FM radio band, following increased uptake of the Digital Audio Broadcasting (DAB) standard since its introduction in 2015.

The Norwegian Ministry of Culture began the FM broadcast shutdown on the 11th of January at the auspicious time of 11:11, but the phased closure will take the rest of the year to complete. Other nations are considering following suit, despite Norway’s desire to move to DAB being largely a result of its geography and the resulting higher-than-usual expense of national FM broadcast networks: the UK has a schedule in place which will see FM shut down once at least half of all radio listeners use digital equivalents and DAB signals can reach at least 90 per cent of the population.

The Ministry of Culture has not yet publicly announced its plans for the FM portion of the radio spectrum once the broadcast switchover is complete.