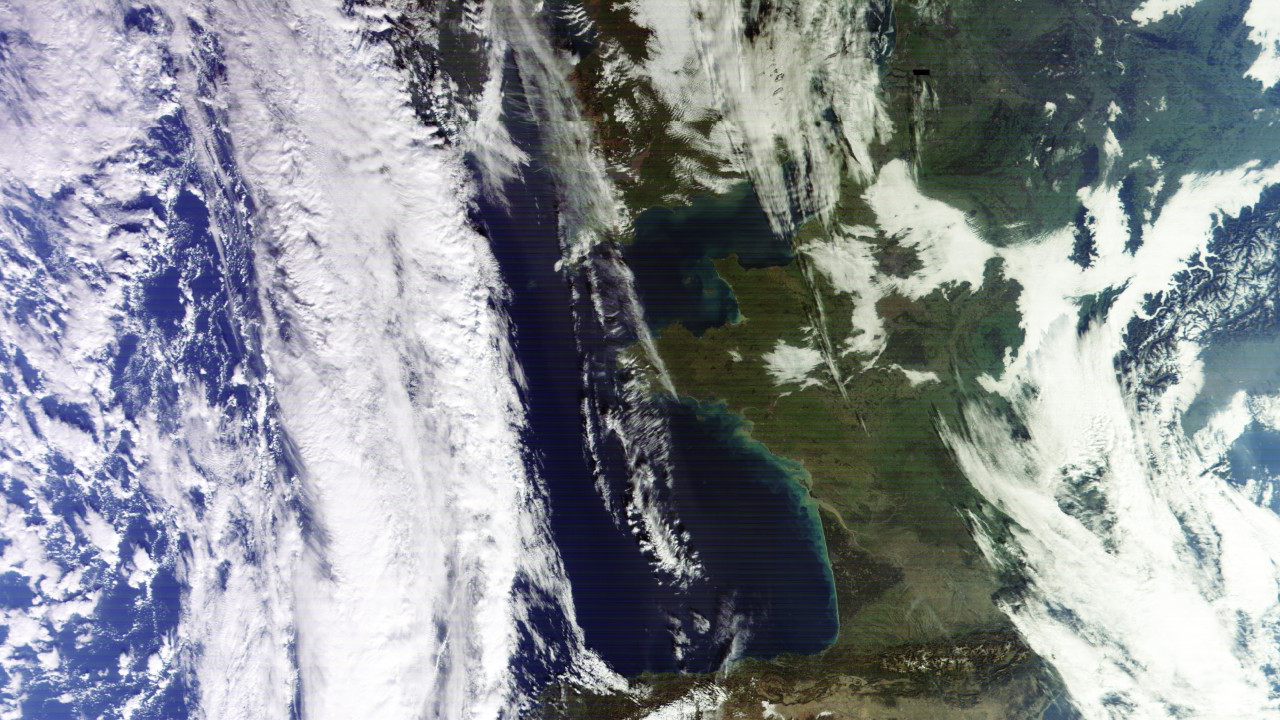 LimeSDR users have been showing off their satellite imagery successes on social media, capturing data from NASA’s Terra, Suomi-NPP, NOAA-20, and more and decoding it to great effect.

“Here it is,” writes Peter Kooistra on Twitter, while sharing images including the one adorning this newsletter. “My first Terra with the LimeSDR @ 30 msps [megasamples per second], hand-tracked/1.10 cm offset. Terra’s signal/processing, due to its excellent FEC [Forward Error Corrector], it decodes even at low signal levels.”

The Terra satellite, also known as Earth Observing System (EOS) AM-1, is a climate research bird launched into a Sun-synchronous orbit and designed to measure the Earth’s atmosphere, water, and land using a range of instruments. Launched in 1999, the satellite is still operational – and, as Peter shows, can be picked up using a LimeSDR.

The videos recorded at GRCon22, the GNU Radio Conference 2022, are now available to stream – including project updates, lightning talks, and more.

Among the presentations recorded at the event and now available to view are a technical update on the GNU Radio project by Josh Mormon, a lightning talk on an Orthogonal Frequency Division Multiplexing (OFDM) Wi-Fi scanner based on a field-programmable gate array (FPGA), a look at Sparrow, a new platform for broadband software radio development,a look at spectrum scaling from Nick Richard, and an introduction to DIFI, the “universal language” for streaming digitised RF developed by Microsoft.

All the videos are available to stream now on YouTube, in a central playlist of an impressive 68 videos total. More information on the convention itself can be found on the GNU Radio events site.

Sysmocom, the organisation behind the Osmocom project, has announced that it has received funding from the Open Technology Fund which it will be using to enhance the project’s open-source cellular network infrastructure stack.

“The funded activities are in the following areas,” writes Harald “LaForge” Welte of the grant. “Better integration between the Osmocom 2G/3G core network elements and the open5gs 4G EPC (evolved packet core); improving the stability, quality and maturity of the open5gs EPC by implementing functional test suites in TTCN-3; establishing interoperability with various base station hardware; support three trial deployments in rural Mexico with our partner Rhizomatica; [and to] organise a series of webinars for security researchers on how to use our tools for furthering their research projects.”

The 12-month grant provides the project with $203,446 in funding, the Open Technology Fund has confirmed. “We’d like to thank OTF awarding funding to our proposal,” Harald adds. “We’d also like to thank Rhizomatica and specifically Peter Bloom for all his help in putting together the proposal.”

More details are available on the Open Tech Fund website.

In other Osmocom news, the osmo-e1d E1 TDM interface driver has received its first-ever user manual – designed to make it more approachable to newcomers.

“It was recently noticed that years after first releasing the osmo-e1d software, we still didn’t have a user manual for it,” Harald Welte writes. “We’re happy to announce osmo-e1d now has at least a basic user manual has been merged into the repository.”

Originally written by Sylvain Munaut in 2019 and since maintained and extended by Harald, the osmo-e1d project provides a userspace daemon for control of E1 primary rate time-division multiplexing (TDM) circuits. “It typically sits between an E1 hardware interface beneath it,” the new documentation notes, “and application software above it.”

The new user manual includes an introduction to the project, an installation guide, instructions on running the driver software, and notes on the client interface, the USB physical and vpair virtual drivers, and its support for OCTOI TDM over IP (TDMoIP) operation, among other topics.

In a final piece of Osmocom news, Harald Welte has announced the publication of a SIMtrace2 tutorial video – originally recording during an OsmoDevCall event.

“Some weeks ago, there was an OsmoDevCall presenting a SIMtrace2 Tutorial,” Harald explains. “The video recording of this has now been edited and subsequently has been published. We invite any new users of SIMtrace2 to have a look at this tutorial to get their setup going.”

SIMtrace2 is a hardware gadget designed to aid with debugging SIM and USIM card operations, offering the ability to trace calls between a SIM or USIM and mobile hardware and to emulate a SIM card itself. “Applications of SIMtrace2 include: SIM card application development (STK); SIM card remote filesystem (RFS) and Over-the-Air (OTA) development and debugging; [and] security analysis and research regarding SIM-card malware,” its creators note.

The tutorial video is available via media.ccc.de now, with supporting slides available as a PDF download from the Osmocom git repository. More information on the SIMtrace2 hardware can be found on the Sysmocom website.

The Linux Foundation Europe has announced Project Sylva, through which it aims to create an open-source cloud framework to support open networking in telecommunications.

“We are pleased to collaborate closely with leading European telcos and vendors eager to more fully harness the power of open source to accelerate cloudification of the network within EU privacy and security guidelines,” says Arpit Joshipura, general manager for networking, edge, and the Internet of Things (IoT) at the Linux Foundation. “A unified approach to hosting 5G deployment applications from the Core to the RAN is critical for fostering innovation for broad digital transformation, augmenting work in LF Networking and LF Edge communities.”

To be run as a Linux Foundation Europe community project, Project Sylva includes members from Telefonica, Telecom Italia, Orange, Vodafone, Deutsche Telekom, Ericsson, and Nokia. Its goals include the release of a cloud software framework for integration with existing open-source components and the development of a reference implementation of said framework to icnlude the creation of a integration and validation programme to support its adoption.

“Sylva has the potential to accelerate the cloudification of telecommunications platforms and network functions to boost security, reduce energy consumption and deliver cross-border applications such as connected car safety systems to more end users,” claims Vodafone’s director of network architecture Santiago Tenorio. “It is the framework on which we can solve complex technical problems in a collaborative and open way by re-using and building on the excellent work delivered in existing open source projects such as Kubernetes, Anuket, and the CNF Certification Program.”

More information is available on the Project Sylva GitLab repository.

The LuaRadio project has announced the rleease of v0.11.0, which brings with it bug fixes and improved documentation for its installation under Ubuntu, Debian, and Raspberry Pi OS Linux distributions.

Designed as a lightweight, embeddable signal processing framework based on flow graphs, LuaRadio offers a simple application programming interface (API) and lighweight resource usage — coming in at less than 750kB binary size, including the LuaJIT just-in-time compiler on which it is built.

In LuaRadio v0.11.0, the software receives fixes for bugs in WAV-format audio output and portaudio output as well as the addition of successful exit return values to stop and wait operations. On the documentation side, the new release brings clearer and more up-to-date information on the prerequisites required for installation on Ubuntu, Debian, and Raspberry Pi OS Linux distributions.

The latest version is available now on the LuaRadio GitHub repository, where the project’s source code is published under the permissive MIT licence.

TelecomTV has published a talk with Kristian Toivo, the recently-appointed executive director of the Telecom Infra Project (TIP), recorded at the FYUZ22 event in Madrid last month.

“What attracted me [to TIP], I would say, [is] I spent more than 30 years in the network domain actually driving R&D [Research and Development] and product development,” Kristian explains in the interview, “and then also in various sales roles. I did a stint in media and IT, and then there came an opportunity to come back to the networking domain but particularly with the angle of doing things that are different, and that truly attracted me.”

The video discusses the evolving role of TIP, originally founded in 2016 as a non-profit with an engineering focus on collaborative development of open global telecom infrastructure, and its journey towards open and disaggregated telecommunications networks. Kristian also talks about the open telecom ecosystem and the areas in which the organisation will be focusing in the years to come.

The full video is available to watch on the TelecomTV website now.

Developer Tomasz Lisowski has released a new tool, swSIM, which aims to be a software-only SIM card simulator for mobile communications analysis and experimentation – and it needs no special hardware to run.

“swSIM is an all-software SIM card,” Tomasz explains of the project. “It’s the first publicly available (to the best of my knowledge) SIM card simulator which does not rely on any SIM hardware to work. The PC/SC interface allows it to connect to ANY phone with a SIM card slot. We used the SIMtrace2 device running on the cardem firmware but any other tool which forwards messages to and from the phone would work as well.”

The software ties in to Tomasz’ swICC framework for software integrated circuit card (ICC) operation – using the swICC PC/SC interface device to connect the software-based SIM to a host computer.

The full source code for swSIM has been published to GitHub under the permissive Apache 2.0 licence, with swICC and the swICC PC/SC IFD handler also available under the same terms.

Finally, RadioStack’s Maverick-603 open-silicon FT8 receiver project is more than halfway to its funding goal – but with only 18 days left until the deadline, the race is on to get it over the line.

Described by its creators as a “a rare project that bridges amateur radio and open source chip design,” the Maverick-603 is a compact receiver for the FT8 digital mode – but with a major difference: the decoder chip at its heart is open silicon, released under an open-source licence and built using an open process design kit (PDK) via the Efabless ChipIgnite programme.

“This draws attention to one of our main goals,” the RadioStack team explains. “To show the true capabilities of open source chip design and the possibilities that arise when they are realised. Expanding the reach of this community will allow for the development of technologies that many never thought would be within the grasp of open source tools.”

The Maverick-603 hardware is available to pre-order on Crowd Supply now at $149 per board, in a campaign ending on the 13th of December and which needs, at the time of writing, an additional $4,695 to reach its goal for mass production.