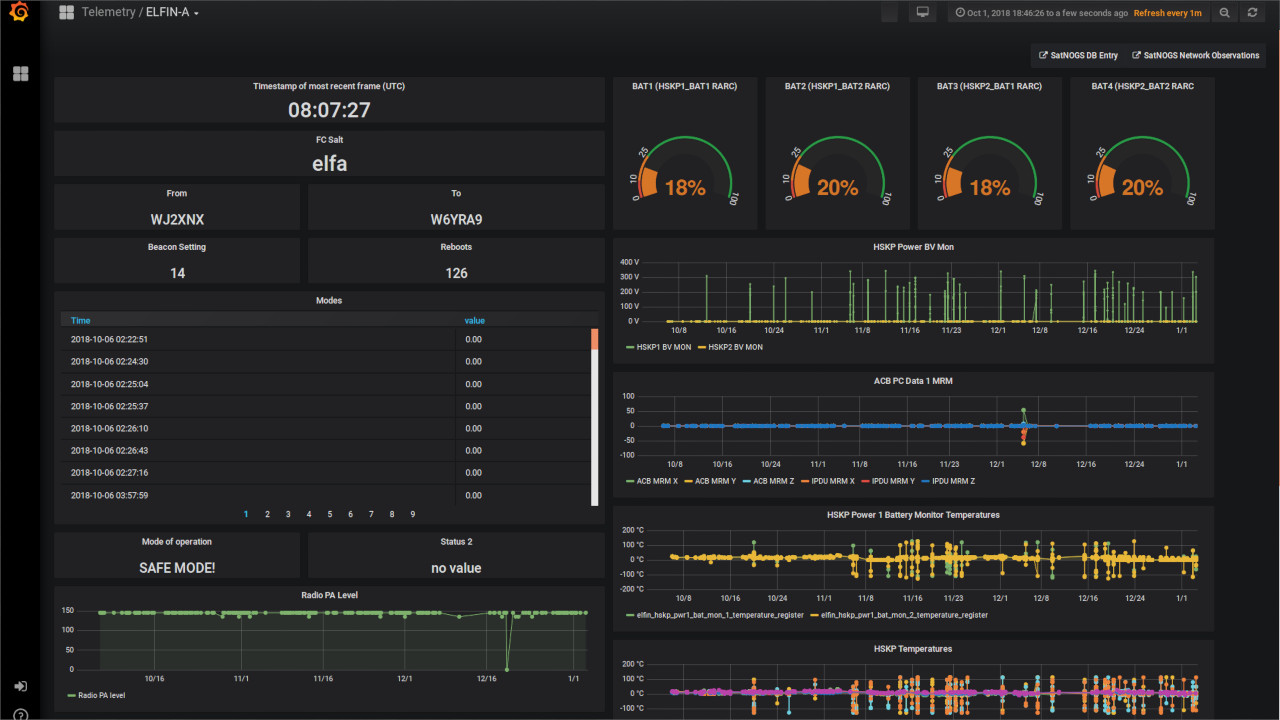 The 35th Chaos Communication Congress (35c3) played host to antenna engineer Friederike Maier, whose talk on software defined radio basics and modulation theory serves as a great introduction to the concepts for beginners.

“Some basic knowledge what is going on in SDR Hard/Software as the influence of the sample rate, I/Q-data of the math behind the waterfall-diagram is helpful to have fun with SDR,” Friederike’s talk summary continues. “Some theory on modulation techniques helps you to decode or encode your waveforms.”

The full presentation is available to stream or download now via the CCC Media Centre.

The SatNOGS Project, an effort to produce an interlinked network of satellite ground stations built on open hardware and open source software, has announced the launch of two new major features: the SatNOGS Data Warehouse and linked SatNOGS Dashboard.

“This has been a long time coming,” writes Corey Shields in the launch announcement, “and we are happy to share the latest in the SatNOGS suite: the SatNOGS Dashboard and Data Warehouse. This is a time-series database where decoded telemetry and data from captured data frames can be stored and analysed.

“In this setup we are using influxdb as the database to hold telemetry, and grafana for the visualization layer. We want satellite graphs to be crowd-sourced and collaborative. We welcome you all to sign in to the dashboard, and if you would like to hack on your own graphs let us know and we will grant you privileges to do so.”

The dashboards are live now, with historical data to be imported if time allows, while information on creating custom dashboards can be found on the SatNOGS Wiki.

Daniel Estévez’ work with the Es’hail 2 amateur radio satellite continues, with a wealth of updates over the previous month – including analysis of a month’s worth of Doppler measurements.

“Since November 27, I have been monitoring the frequency of the 10706 MHz beacon to measure the Doppler,” Daniel writes. “A geostationary satellite is never in a fixed location as seen from the Earth. It moves slightly due to imperfections in its orbit and orbital perturbations. This movement is detectable as a small amount of Doppler. It is worthy to note that, besides the usual satellite movement in its geostationary orbit, which causes the small Doppler seen here, and the station-keeping manoeuvres done sometimes, another interesting thing has happened during the measurement period. On 2018-12-13 at 8:00 UTC, the antenna where the 10706 MHz beacon is transmitted was changed.

“Before this, it was transmitted on a RHCP beam with global coverage. After the change, the signal was vertically polarized and the coverage was regional. Getting a good coverage map of this beam is tricky, but according to reports I have received from several stations, the signal was as strong as usual in Spain, the UK and some parts of Italy, but very weak or inexistent in Central Europe, Brazil and Mauritius. It is suspected that the beam used was designed to cover the MENA (Middle East and North Africa) region, and that Spain and the UK fell on a sidelobe of the radiation pattern.”

Zoltán has left access to the OpenWebRX server open, for “educational purposes. You can use this audio stream to experiment with narrow band satellite reception without physical ground station (SDR, LNA and antenna hardware),” he explains, “having fun and learning SDR technologies without experience (and investment) in RF Hardware.”

More information, and a link to the OpenWebRX server, can be found on Zoltán’s blog post, while more information on the build is available on the accompanying YouTube video.

Business-oriented technology site TechCrunch has published a piece on the LibreRouter Project, an effort to create low-cost open-source mesh networks for communications in rural areas across the globe.

“In the city, we’re constantly saturated with the radio waves from 10 or 20 different routers, cell towers and other wireless infrastructure. But in rural communities there might only be one internet connection for a whole village,” TechCrunch’s Devin Coldewey explains. “LibreRouter is a hardware and software project that looks to let those communities build their own modern, robust mesh networks to make the most of their limited connectivity.

“The goal, as LibreRouter’s Nicolás Pace explained to APNIC, is to make mesh networks affordable, robust, scalable and simple to operate; they’re not all the way there, but they do have a working prototype and full software stack based on OpenWRT, a well-known and trusted wireless utility. They’ve designed the router itself to be modern and powerful, but easy to repair with normal tools and off-the-shelf parts; the software won’t quite be one-click simple, but it should automate many of the harder parts of configuring a mesh.”

Devin’s full write-up can be found over on TechCrunch, while more information is available on the LibreRouter website.

Hackaday’s Al Williams has published a piece on a Dominic Spill’s talk from the Supercon event: Ridiculous Radios, which includes his “breadboard SDR” built from a microcontroller, an antenna, a diode, and a resistor.

“There were plenty of great talks at this year’s Supercon, but we really liked the title of Dominic Spill’s talk: Ridiculous Radios,” writes Al. “Let’s face it, it is one thing to make a radio or a computer or a drone the way you are supposed to. It is another thing altogether to make one out of things you shouldn’t be using.

“That’s Dominic’s approach. In a quick 30 minutes, he shows you two receivers and two transmitters. What makes them ridiculous? Consider one of the receivers. It is a software defined radio (SDR). How many bits should an SDR have? How about one bit? Ridiculous? Then you are getting the idea.”

As well as Al’s write-up, the talk is available as a YouTube video with PDF slide deck.

RTL-SDR has also brought to our attention a video on TempestSDR, a system for monitoring the signals coming from a computer monitor and reproducing the image remotely, produced by SignalsEverywhere.

As anyone who has torn their hair out trying to trace spurious signals will know, any electronic device is an unintended radiator of radio frequency signals. This includes display devices: Security agencies around the world require special shielding, rated under the codename TEMPEST, to prevent display device signals from being monitored and the image reproduced remotely – which is, unsurprisingly, exactly what TempestSDR does.

In SignalsEverywhere’s video, the TempestSDR software – which uses the ExtIO to communicate with software defined radio hardware – is connected to a low-cost SDR with a basic antenna. The signals coming from the off-the-shelf monitor are then captured and decoded, albeit in fuzzy, monochrome form – but it’s enough to demonstrate the concept, and why security services require TEMPEST protection.