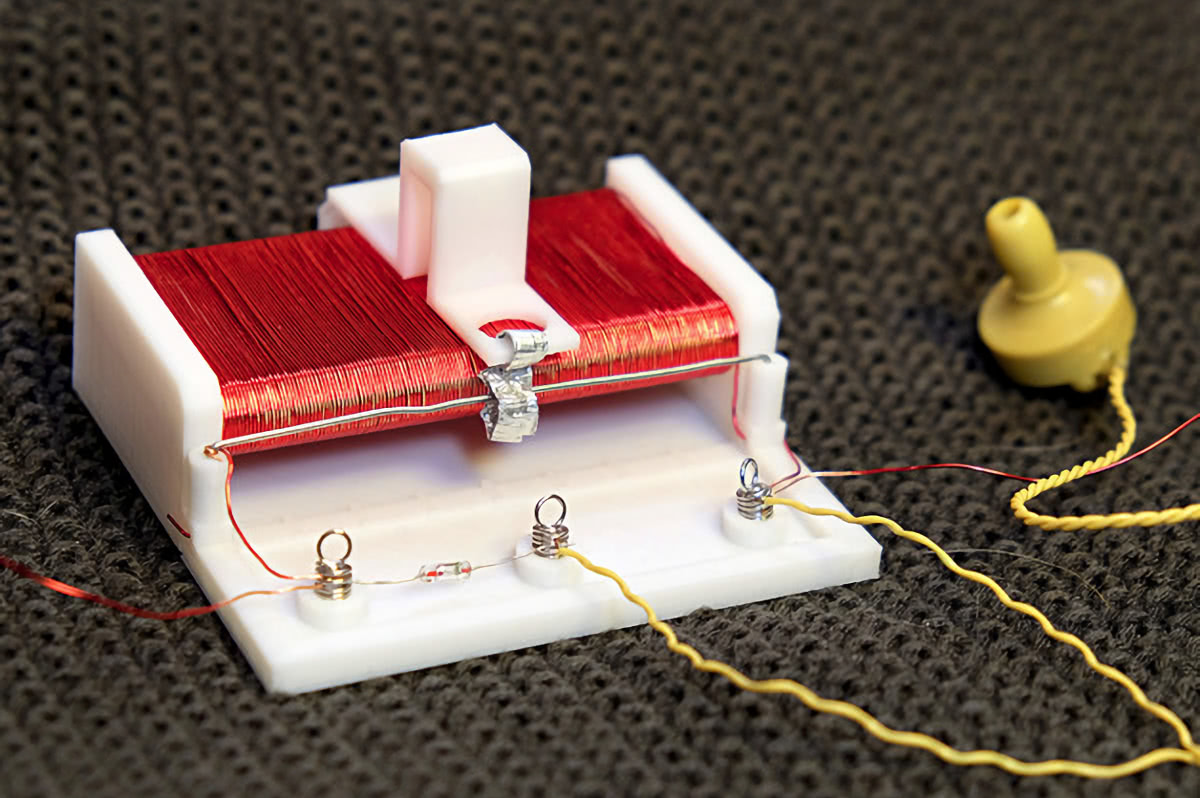 Dr. Danny Webster’s Wireless Masterclass series continues with a look at more advanced digital radio concepts and implementations including the detection and reduction of data loss

The fourth in an ongoing series of presentations, Wireless Masterclass 4 follows on from the introductory video for those new to digital radio, an in-depth look at the LimeSDR family and the LMS7002M which powers them, and discussions on real-world considerations for radio links.

Those interested in the use of the upcoming LimeSDR Mini in prototyping and education will be interested to hear of a partnership with Seeed Studio to produce the LimeSDR Mini Grove Starter Kit, a low-cost bundle of electronic components designed to interface sensors and outputs with the LimeSDR Mini via a Raspberry Pi single-board computer (SBC).

Designed primarily for educational use, though also entirely suitable for testing and prototyping prior to designing custom circuitry, the LimeSDR Mini Grove Starter Kit includes a LimeSDR mini with 433/686/915 MHz optimised antenna pair, an acrylic base plate, cabling, a GrovePi+ Raspberry Pi daughterboard, and a range of Grove-compatible input and output devices ranging from an ultrasonic distance sensor and combined temperature and humidity sensor to a three-axis digital accelerometer and LED bar graph.

The kit is priced at $249 (around £175 excluding tax), with the user supplying a Raspberry Pi (version 3 recommended for optimum performance), power supply, and micro-SD card. Pre-orders are open now on Crowd Supply ahead of the first shipment going out at the end of March 2018.

For those eagerly waiting for a LimeSDR, good news: the first production batch of boards entered assembly late last month and will be reaching customers as soon as possible.

Those who have backed the LimeSDR project can expect to receive a shipping email from Crowd Supply in the coming days, if they have not already received one, once the boards have passed through the comprehensive production testing process. Fulfilment is via Crowd Supply’s own warehouse, with tracking details available once shipped via the website’s My Account section.

The BT and Lime Microsystems radio access network (RAN) competition, launched back in December, is bearing fruit with the official forum beginning to fill with an impressive selection of quality projects.

A joint project of telecommunications giant BT and Lime Microsystems, the competition aims to encourage the development of software-defined radio access applications – ranging from cellular network base stations, Wi-Fi access points, to Bluetooth, LoRa, TETRA, or platforms as-yet unexplored – by asking community members to come up with novel projects built around the LimeSDR family.

With entries closed at the end of January, the RAN forum has begun to fill with entrants’ demonstrations – including an impressive Wi-Fi signal generator and analyser application built in MATLAB, a rapid-setup Long Term Evolution (LTE) small-cell basestation, and using a LimeSDR to turn a simulated Bluetooth PHY layer into an actual radio.

Winners will be announced by the 14th of February 2018, with more information available on the official competition page.

In other competition news, the Defense Advanced Research Projects Agency (DARPA) has announced that it will be holding a live finale for its Spectrum Collaboration Challenge as part of the Mobile World Congress Americas event in September 2019.

As part of the live event, a series of teams chosen in October last year will present projects completed over the past three years in the field of improving how radio spectrum can be better shared and used in noisy or otherwise busy environments. For their trouble, the winners will receive $2 million for first place, $1 million for second place, and $750,000 for third place rankings.

“The event will create a platform for the SC2 teams to present three years’ worth of innovation,” explains Paul Tilghman, SC2 programme manager, “addressing spectrum challenges that have plagued commercial and military communications over the past two decades.”

Scott Tilley has written up his discovery of the long-lost IMAGE satellite, which led to NASA’s successfully re-establishing contact with the satellite late last month.

Launched in 2000 and originally scheduled for a two-year operational period which extended to over five and a half years, the Imager for Magnetopause-to-Aurora Global Exploration (IMAGE) satellite stopped communicating with ground stations in December 2005. An eclipse in 2007 was hoped to reboot the system by interrupting its supply of electricity from the on-board solar panels, but when this failed the mission was declared over and the satellite presumed lost.

“Upon reviewing the data from January 20, 2018, I noticed a curve consistent with an satellite in High Earth Orbit (HEO) on 2275.905 MHz,” Tilley writes of his discovery. “This is not uncommon during these searches. So I set to work to identify the source. A quick identity scan using ‘strf’ (sat tools rf) revealed the signal to come from 2000-017A, 26113, called IMAGE. As I reviewed another chunk of spectrum a bit lower in frequency I was greeted by a much stronger carrier and what appeared to be data side bands. With a properly equipped ground station, telemetry would certainly be possible to copy.”

NASA, naturally, has access to the proper equipment. “On the afternoon of January 30th, the Johns Hopkins Applied Physics Lab in Laurel, Maryland, successfully collected telemetry data from the satellite. The signal showed that the space craft ID was 166 – the ID for IMAGE,” the organisation writes of its latest findings. “The NASA team has been able to read some basic housekeeping data from the spacecraft, suggesting that at least the main control system is operational. Scientists and engineers at NASA’s Goddard Space Flight Centre in Greenbelt, Maryland, will continue to try to analyse the data from the spacecraft to learn more about the state of the spacecraft. This process will take a week or two to complete as it requires attempting to adapt old software and databases of information to more modern systems.”

Semiconductor Engineering has posted a video interview with Achronix’ senior director of strategic planning Mike Fitton on the subject of the latest 5G cellular networking standard.

Due for its first full-scale test during the Winter Olympics, to be held in South Korea’s Pyeongchang this month, the 5G standard was being finalised as recently as December last year, 5G New Radio (NR) is due to take over from 4G Long Term Evolution (LTE) as the primary standard for high-performance cellular networking. During the interview Mike discusses the standard itself, the roadmap for its commercial roll-out, the technical issues it faces, and its security implications.

Tom Lebryk has written up his ‘Backpack Shack 2.0’ portable wideband magnetic loop antenna build as a guest post on the SWLing Post blog.

“The flimsy ‘Backpack Shack’ prototype broadband loop antenna created over a year ago had found a permanent home on the porch for general listening,” Tom explains. “I started itching to make a new one that was even more portable. The new design criteria were: Retain the broadband design of the amplified loop on a sturdy form; Shrink the size to fit into a backpack without heavy stand or long pole; Build a modular platform that would allow quick setup; Be something durable that can last me 20+ years of use; Allow the loop to be rotated and tilted by hand; Be easy to hook up to any kind of radio; and, later on, enhance the design as a true Ferrite Sleeve Loop”

The result: “Performance: Good on MW and very good on Shortwave. It is not in the league of Wellbrook antennas but it is useful as long as the RSP-2 LNA is kept down around -7 on MW and -4 on SW, else it overloads.”

Alan Wolke has published a series of videos guiding users through the hows and whys of Smith charts, a nomogram designed specifically for radiofrequency engineering.

Alan’s videos begin with a look at the basics of impedance and admittance curves and conversion, go through the voltage standing wave ratio (VSWR), reflection coefficient and transmission line effects before finishing with the design of an L-network impedance matching circuit. Each video also comes with scans of corresponding hand-drawn notes for clarity.

AMSAT, the organisation for satellite amateurs, has announced that satellite AO-92 is now officially available for amateur use as of the 26th of January 2018.

Also known as Fox-1D and launched on the 12th of January from the Satish Dhawan Space Centre in India, AO-92 was formally turned over to AMSAT operations by vice president Jerry Buxton this January. The official announcement includes radio programming charts with transmission and receive frequencies for the satellite’s approach and departure stages along with images received from its camera.

RTL-SDR has drawn our attention to a project to design and build an ultra-wideband Vivaldi antenna for use with a LimeSDR Mini.

“The Vivaldi is a fairly well known ultra wideband antenna that is directional. It is fairly easy to build out of a PCB board, but requires some careful design considerations to work well,” the RTL-SDR article notes. “The results show that the antenna works well as a directional antenna above 1.7 GHz, and begins to work more like a standard dipole below 1.7 GHz. Directional gain is greater than 5dB above 1.7 GHz, and becomes negative below 1 GHz. Although hexandflex notes that the gain below 1 GHz is still reasonable, and probably still better than any untuned monopole.”

A small number of the antennas are available to purchase from Tindie via a waiting list.

“I was inspired by the DIY crystal and foxhole radios of the early 1900s,” explains creator Sage Hansen of his project, “but I created my own design to be as simple as possible.” Using a 3D printed chassis and tuning knob, Sage’s radio can be assembled without soldering from a minimum of components – and, naturally, can be used as a receiver for a modern SDR transmitter.

Full details are available on Instructables, with 3D printing files available from Thingiverse under a Creative Commons licence.